Coffee is the leading beverage after water worldwide, and its trade exceeds US$10 billion [1]. Caffeine is present in many dietary sources consumed around the world, such as in coffee, tea, candy bars and cocoa beverages. The amount of caffeine ranges quite widely between these various foods, with coffee representing a major source of intake (71–220 mg caffeine/150 ml) [2,3,4]. Coffee has been shown to exert beneficial effects toward human health, including cardiovascular health, several types of cancer and neurodegenerative diseases [5], due to prevailing mechanisms such as inhibition of oxidative stress, regulation of DNA repair, phase II enzymatic activity, apoptosis and inflammation [6]. However, epidemiological evidence has shown that pregnant women and their offspring might be subjected to detrimental effects of caffeinated coffee [5].
As life expectancy increases, age-related cognitive decline can be a major health challenge for the elderly population [7], cognitive health has become an important public health issue for America’s aging population [8]. The process from cognitive decline to dementia is continuous and irreversible, and there is no effective treatment for dementia so far, the therapeutic value of drugs currently used is limited. Thus, developing measures to reduce risk for low cognitive performance as well as treatments of diagnosed dementia occupy a high priority in society.
A number of epidemiological studies have demonstrated an association between higher coffee consumption and better cognitive performance [9,10,11,12,13]. Cognitive benefits from coffee consumption were typically attributed to caffeine. Caffeine is an antagonist of A1 and A2A adenosine receptors in the central nervous system and is known to have positive effects on attention, arousal, mood and vigilance [14,15,16]. Epidemiological studies have reported that caffeine was associated with cognitive impairment [17,18], suggesting that caffeine had a protective effect on cognitive performance. Furthermore, some studies of the association between caffeine and cognitive performance have also noted differential associations by gender, and the results were inconsistent [19,20,21,22]. However, few studies have explored the associations of decaffeinated coffee and caffeine intake from coffee with cognitive performance, and the results were inconsistent. Some studies have indicated that decaffeinated coffee might bring about some improvements to cognitive performance [23,24], while other studies have found that there was no significant association between decaffeinated coffee and cognitive function [25,26]. Moreover, some studies have suggested that caffeine from coffee was associated with cognitive performance [19,27], while other studies have reported null associations [28].
Therefore, we analyzed a nationally representative sample of older adults aged 60 years or older from the National Health and Nutrition Examination Survey (NHANES) to investigate the associations of total coffee, decaffeinated coffee, caffeinated coffee and caffeine intake from coffee with cognitive performance.

The National Health and Nutrition Examination Survey (NHANES) is a two-year-cycle cross-sectional survey conducted by the Centers for Disease Control and Prevention (CDC) of America, which aims to evaluate the health and nutritional status of the U.S. population [29]. Representative samples of the non-institutional U.S. population were selected by a complex stratified, multistage sampling design. Participants first took part in an interview at home and then carried out the health examination in a mobile examination center (MEC) [30]. The NHANES protocols were approved by the National Center for Health Statistics Ethics Review Board of the U.S. CDC, and written informed consent from all the participants was provided during the survey.
Two cycles (2011–2012, 2013–2014), with information on coffee and caffeine intake from coffee as well as cognitive function measures, were combined and used in the analysis. A total of 19,931 individuals participated in the NHANES from 2011 to 2014, and our analyses were limited to 3632 individuals aged 60 years or older. Among them, we excluded participants with incomplete cognitive tests or with unreliable values for the three cognitive function measures (n = 698), and incomplete or unreliable 24-hour recall data (n = 410). Individuals who had extreme total energy intakes of <500 or >5000 kcal/day for women, and <500 or >8000 kcal/day for men (n = 11) were further omitted. After exclusions, this study contained a total of 2513 participants aged 60 years or older (1214 men and 1299 women) (Figure 1).

A series of assessments for cognitive performance in the NHANES were used in the 2011–2014 survey, and cognitive tests were performed among participants aged 60 years or older [31]. Cognitive performance was assessed in a Mobile Examination Center (MEC) and was evaluated by the Consortium to Establish a Registry for Alzheimer’s Disease (CERAD) Word Learning sub-test, the Animal Fluency test and the Digit Symbol Substitution Test (DSST). These tests, which have been used in large screenings, epidemiological and clinical studies [32,33,34,35,36,37], evaluate working memory, language, processing speed and executive functioning in older adults. Participants were asked for consent to audio-record the administration for quality control purposes. Two interviewers transcribed responses from the audio recordings and scored the CERAD test, the Animal Fluency test and the DSST for interviews in English and Spanish. Transcription and scoring were usually done on the same day. Tests conducted in other languages were transcribed verbatim and scored by consultants in those languages later. If necessary, inconsistent scores were adjudicated by a third party. Approximately 10% of recorded interviews were independently reviewed during data collection [38].
The CERAD test consisted of three consecutive learning trials as well as a delayed recall, which were designed to assess immediate and delayed learning ability for new verbal information. In the learning trials, participants were organized to read aloud 10 unrelated words when they were presented one at a time. Immediately following the introduction of the words, participants recalled as many words as possible. The delayed word recall was completed after the Animal Fluency and DSST tests. The score on each trial ranged from 0 to 10, and the total score of the CERAD test was the sum of three learning trials and a delayed recall trial. As a component of executive function, the Animal Fluency test examined categorical verbal fluency, participants were called upon to name as many animals as possible in one minute. The score was the sum of the number of correct answers. The DSST, a performance module from the Wechsler Adult Intelligence Scale, was used to assess processing speed, sustained attention and working memory. The exercise was performed using a piece of paper with a key at the top pairing numbers with nine symbols. Participants had two minutes to copy the corresponding symbols from the 133 boxes that held adjacent numbers. The score, ranging from 0 to 133, was the sum for the number of correct matches.
Currently, there is no gold standard of cutoff point for the CERAD, Animal Fluency and DSST tests to identify low cognitive performance. Therefore, we used the 25th percentile of the score, the lowest quartile, as the cutoff point, which is consistent with the methods used in the published literature [39]. Furthermore, considering that age has a significant effect on cognitive performance, the score was further categorized based on age (60 to <70 years, 70 to <80 years, and ≥80 years) [40]. Regarding the CERAD test, the cutoff values of low cognitive performance were 22, 19 and 16 for the three age groups, respectively. Regarding the Animal Fluency test, the cutoff values were 14, 13 and 12, and for the DSST, the cutoff values were 38, 34 and 29, respectively. For each dimension, participants were divided into two groups: the low cognitive performance group, with people who scored lower than the corresponding cutoff values, and the rest, who were assigned to the normal cognitive performance group.

Consumption data for coffee and caffeine intake from coffee came from two cycles of the nationally representative NHANES, corresponding to the years 2011–2012 and 2013–2014. Coffee and caffeine intake from coffee were obtained from two 24-hour dietary recall interviews. Trained interviewers conducted dietary recall interviews using an automated data collection system during the MEC examination [41]. At the end of the MEC dietary interview, the interviewers will schedule the sample persons for a phone follow-up (PFU) interview 3–10 days later. Dietary telephone interviewers at the home office will conduct the PFU interviews.
We used the United States Department of Agriculture (USDA) Dietary Sources of Nutrients database to identify coffee beverages and caffeine [42]. Coffee consumption was determined using a food frequency questionnaire during the home interview [43,44]. Participants were asked the question “Did you drink coffee?”. If the participants answer affirmatively, they were asked to report the number of cups of coffee they drank by choosing from 10 categories (none, less than 1 cup per month, 1–3 cups per month, 1 cup per week, 2–4 cups per week, 5–6 cups per week, 1 cup per day, 2–3 cups per day, 4–5 cups per day, 6 or more cups per day). They also reported questions about types of coffee beverage, for example, “How often was the coffee you drank decaffeinated?”, “How often did you add sugar or honey to your coffee?”, “What kind of milk was usually added to your coffee?”. The resulting data files provided frequency information for all these questions which can be collapsed to examine intake for all coffee combined, or by type. The classification of coffee beverage is shown in Supplementary Table S1. The agreement between the two recalls was high (intraclass correlation coefficient: 0.634 for total coffee intake, 0.631 for caffeinated coffee intake, 0.612 for decaffeinated coffee intake, 0.676 for caffeine intake), so we used a combination of the first-day and second-day mean values to make use of all available dietary data. Caffeine consumption (mg/day) was categorized into quartiles (Q1: <25th percentile, Q2: ≥25th to 50th percentile, Q3: ≥50th to 75th percentile, Q4: ≥75th percentile) with Q1 as the reference category. Total coffee consumption (g/day) was divided into four groups, but quartiles could not be used to divide coffee consumption because 28% of the subjects reported no coffee intake. Beyond those reporting no coffee intake, coffee drinkers were divided into tertiles, resulting in four categories: (1) no coffee intake, (2) 1–266.4 g/day, (3) 266.4–495 g/day and (4) 495 or more g/day. Decaffeinated coffee consumption (g/day) was divided into two groups: (1) no decaffeinated coffee intake, and (2) more than 0 g/day. Caffeinated coffee consumption (g/day) was divided into three groups: (1) no caffeinated coffee intake, (2) 1–384.8 g/day and (3) 384.8 or more g/day.

In addition to coffee and caffeine intake from coffee, we investigated some potential confounding factors, which included: age (60–70 years, 70–80 years, and ≥80 years), gender (male and female), race (Mexican American, other Hispanic, Non-Hispanic White, Non-Hispanic Black and other races), educational level (below high school, high school and above high school), marital status (married/living with partner and widowed/divorced/separated/never married), poverty–income ratio (≤0.99 and ≥1), body mass index (BMI) (normal: <25 kg/m2, overweight: 25 to <30 kg/m2, obese: ≥30 kg/m2), drinking (having at least 12 alcohol drinks per year or not) and smoking status (never: never smoked or smoked <100 cigarettes in life, former: smoked ≥100 cigarettes in life and currently no longer smoking and current: smoked ≥100 cigarettes in life and currently smoking) [45,46]. Total energy intake was obtained from the 24-hour dietary recall. Poverty–income ratio (PIR)—the ratio of family income to the poverty threshold—was used to define income [47]. History of hypertension, diabetes or stroke was defined as self-reported physician diagnosis of hypertension, diabetes or stroke.

Conceptualization, D.Z.; Data curation, S.L. and Y.L.; Methodology, X.D., S.L. and J.S.; Writing—original draft, X.D.; Writing—review and editing, D.Z. All authors have read and agreed to the published version of the manuscript.

We thank the staff of the National Centers for Health Statistics of the Centers for Disease Control for designing, collecting, managing NHANES data and releasing data available to the public. 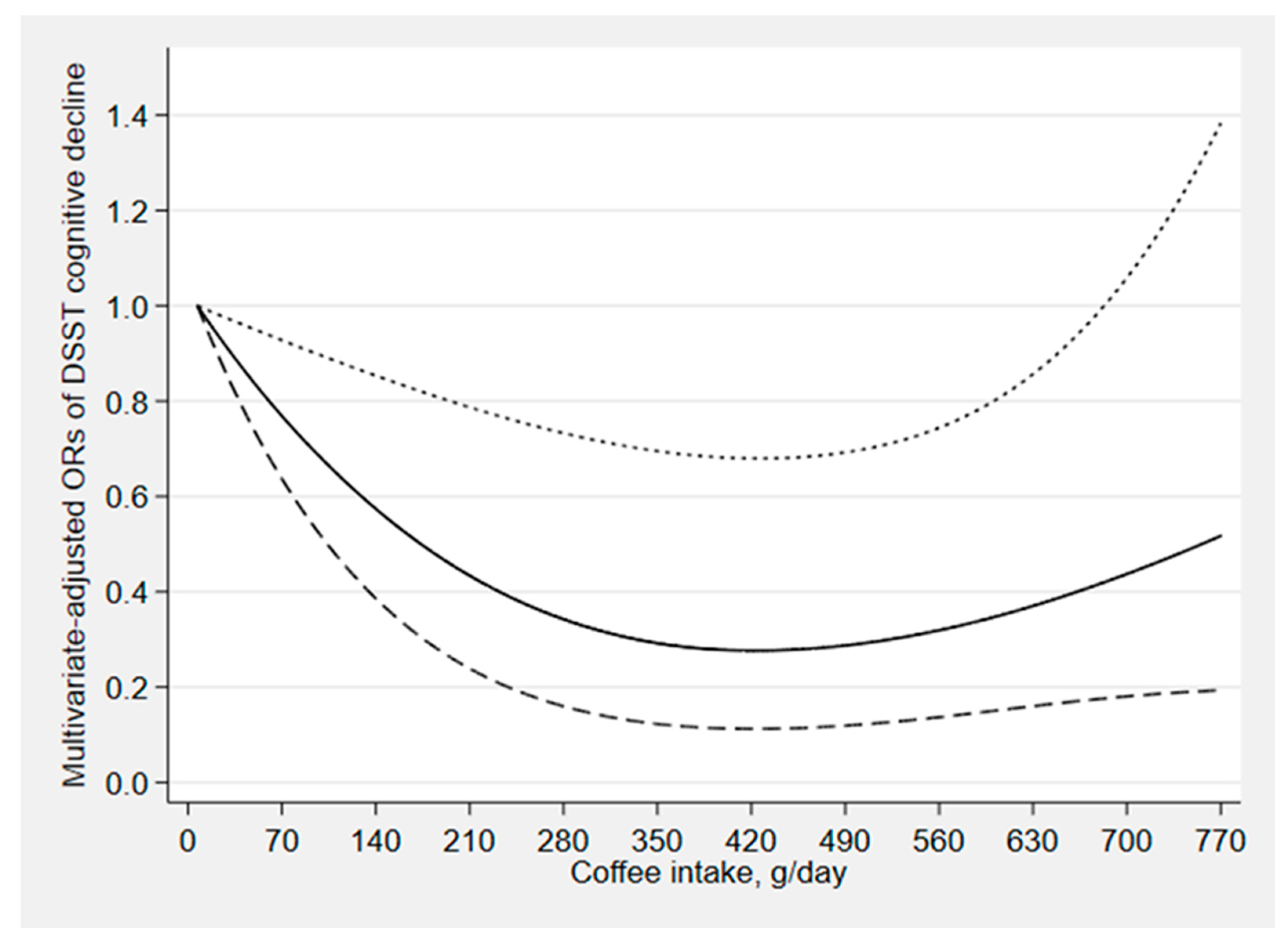 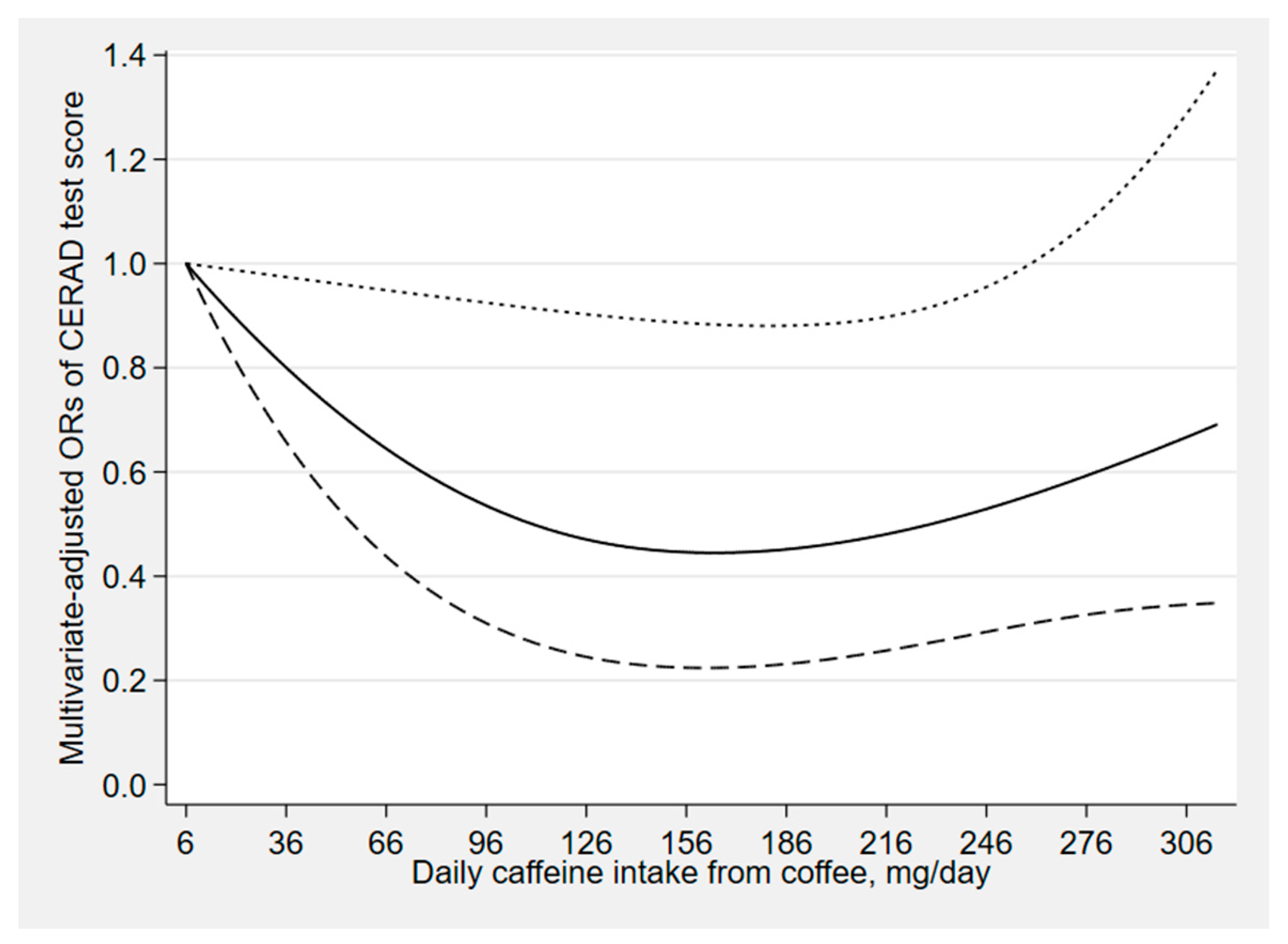