Prevalence of Zinc Deficiency in Japanese Patients on Peritoneal Dialysis: Comparative Study in Patients on Hemodialysis
Previous Article in Journal

A Guide to Human Zinc Absorption: General Overview and Recent Advances of In Vitro Intestinal Models

Some lactic acid bacteria (LAB) are known to improve atopic dermatitis (AD) through the regulation and stimulation of the host immune system. In this study, we found that ingestion of yogurt containing Lactococcus lactis 11/19-B1 strain (L. lactis 11/19-B1) daily for 8 weeks significantly improved the severity scoring of atopic dermatitis (SCORAD) system score from 38.8 ± 14.4 to 24.2 ± 12.0 in children suffering from AD. We tried to identify which LAB species among the five species contained in the test yogurt contributed to the improvement in AD pathology using an AD mouse model induced by repeated application of 1-fluoro-2, 4-dinitrobenzene (DNFB). AD-like skin lesions on the dorsal skin and ear were most improved by L. lactis 11/19-B1 intake among the five LAB species. In addition, analysis of CD4+ T cell subsets in Peyer’s patches (PPs) and cervical lymph nodes (CLNs) indicated that the intake of L. lactis 11/19-B1 generally suppressed all subsets related to inflammation, i.e., Th1, Th2 and Th17, instead of activating the suppressive system, Treg, in the AD mouse model. Histological observations showed ingestion of L. lactis 11/19-B1 significantly suppressed severe inflammatory findings, such as inflammatory cell filtration, epidermal erosion and eosinophil infiltration. These results suggest that the immunomodulatory effects of L. lactis 11/19-B1 contribute to improvements in AD pathology. View Full-Text
Keywords: atopic dermatitis; Lactococcus lactis; clinical test; mouse model; t cell subsets atopic dermatitis; Lactococcus lactis; clinical test; mouse model; t cell subsets
►▼ Show Figures 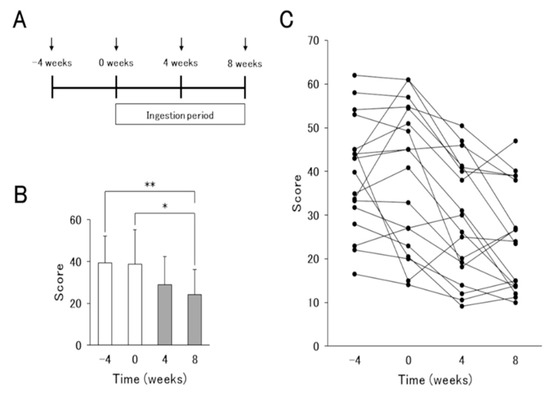