Beneficial Effects of Walnuts on Cognition and Brain Health

Oxidative stress and neuroinflammation have important roles in the aging process, mild cognitive impairment (MCI), Alzheimer’s disease (AD), and other brain disorders. Amyloid beta protein (Aβ) is the main component of amyloid plaques in the brains of people with AD. Several studies suggest that Aβ increases the generation of free radicals in neurons, which leads to oxidative damage and cell death. Aβ can also induce neuroinflammation by increasing pro-inflammatory cytokines and enzymes. Walnuts contain several components that have antioxidant and anti-inflammatory effects. Animal and human studies from our and other groups suggest that supplementation with walnuts in the diet may improve cognition and reduce the risk and/or progression of MCI and AD. In the transgenic AD mouse model (AD-tg), we have reported the beneficial effects of a diet with walnuts on memory, learning, motor coordination, anxiety, and locomotor activity. Human clinical trials have also suggested an association of walnut consumption with better cognitive performance and improvement in memory when compared to baseline in adults. Our recent study in AD-tg mice has shown that a walnut-enriched diet significantly improves antioxidant defense and decreases free radicals’ levels, lipid peroxidation, and protein oxidation when compared to a control diet without walnuts. These findings suggest that a diet with walnuts can reduce oxidative stress by decreasing the generation of free radicals and by boosting antioxidant defense, thus resulting in decreased oxidative damage to lipids and proteins. An in vitro study with synthetic Aβ showed that walnut extract can inhibit Aβ fibrillization and solubilize the preformed Aβ fibrils, suggesting an anti-amyloidogenic property of walnuts. Because it takes many years for cognitive impairment and dementia to develop, we suggest that early and long-term dietary supplementation with walnuts may help to maintain cognitive functions and may reduce the risk of developing, or delay the onset and/or slow the progression of, MCI and dementia by decreasing Aβ fibrillization, reducing oxidative damage, increasing antioxidant defense, and decreasing neuroinflammation. Furthermore, several animal and human studies have suggested that walnuts may also decrease the risk or progression of other brain disorders such as Parkinson’s disease, stroke, and depression, as well as of cardiovascular disease and type 2 diabetes. Together, these reports suggest the benefits of a walnut-enriched diet in brain disorders and in other chronic diseases, due to the additive or synergistic effects of walnut components for protection against oxidative stress and inflammation in these diseases. View Full-Text
Keywords: Alzheimer’s disease; amyloid beta protein; dementia; depression; oxidative stress; inflammation; mild cognitive impairment; nutrition; walnuts Alzheimer’s disease; amyloid beta protein; dementia; depression; oxidative stress; inflammation; mild cognitive impairment; nutrition; walnuts
►▼ Show Figures 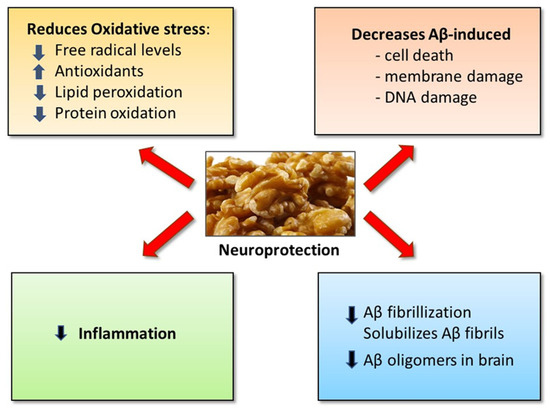