On an average school day in the United States, nearly 30 million children, or about half of the student population, participate in the National School Lunch Program (NSLP) [1]. The NSLP is an important safety net for children from low-income households who are eligible to receive meals for free or at a reduced price. Free meals are also provided to children who attend schools in certain low- income areas [2]. The ability to get free or low-cost meals at school eases the financial burden on households that struggle to afford food and ensures that their children have access to healthy food during the school day. NSLP lunches are required to meet nutrition standards that ensure the meals are consistent with the Dietary Guidelines for Americans (DGAs) [3,4].
Prior research has shown that children who participate in the NSLP consume higher-quality diets overall [5,6,7] and also consume healthier lunches than children who bring a lunch from home or get their lunch from other places [5,6,8,9]. Most children’s diets are, however, not consistent with DGA recommendations. Children generally consume more empty calories and sodium [10,11] and fewer fruits, vegetables, and whole grains [10,12] than the DGAs recommend. Poor diet quality in childhood has been linked to nutrient inadequacy—particularly for vitamin D, iron, and potassium [13,14,15,16]—and negative health outcomes, including overweight and obesity [17], prediabetes [18], and mental health conditions [19].
Research has also shown that the nutritional quality of children’s diets varies depending on the child’s race and ethnicity. In particular, several studies have revealed that non-Hispanic Black children had lower-quality diets than Hispanic [20,21,22,23] and non-Hispanic White children [22,23]; and that Hispanic and Mexican-American children had higher quality diets than non-Hispanic White children [21,22]. Other studies have explored the association between children’s diet quality and income, with mixed results. Some studies found that children from higher-income households had higher-quality diets than those from lower-income households [21,24], but other studies reported the opposite [20], or found no consistent pattern of differences between income groups [22,23].
Although participating in the NSLP has been associated with higher diet quality, little is known about how it affects the diet quality of children in different income and racial/ethnic subgroups. Using nationally representative data from the School Nutrition and Meal Cost Study (SNMCS), this analysis fills this information gap by exploring whether the positive benefits of participating in the NSLP exist for students of different backgrounds.

The SNMCS included nationally representative samples of public school food authorities (SFAs) in the 48 contiguous states and the District of Columbia that participated in the NSLP, non-charter schools within these SFAs (charter schools are independently operated), and students who attended these schools [25]. Within 293 of the schools participating in the SNMCS, data were collected from 2165 students and their parents or guardians (approximately 7 students per school) in the 2014–2015 school year. This analysis is based on 24 h dietary recalls conducted with students aged 6 to 19 years in the spring of 2015. The dietary recalls were administered by trained interviewers using the United States Department of Agriculture’s (USDA’s) Automated Multiple-Pass Method [26] and collected detailed information on all foods and beverages consumed over 24 h on a school day. Data collection across schools was spread across each day of the week (Monday through Friday) to reflect an average school day. Middle- and high-school students completed the dietary recall in one in-person interview, reporting on the previous day’s intake. Elementary school students completed the dietary recall in two separate interviews. The first interview was conducted in person, as soon as possible after students’ lunch periods, and collected information about foods and beverages consumed from awakening through lunch. The second interview was conducted by telephone with parental assistance, usually the following day, and collected information about foods and beverages consumed the rest of the 24 h period.
The 24 h dietary recall data included nutrient values from the Food and Nutrient Database for Dietary Studies, version 2011–2012 [27], and amounts of USDA Food Pattern components (referred to as food groups) from the Food Patterns Equivalents Database, version 2011–2012 [28]. For foods that students obtained from school meals, the study incorporated nutrient and food group values for the foods actually included in NSLP lunches. This process ensured that the nutrient and food group content of these foods were accurately represented in students’ dietary intake data. In addition, using established procedures and information about the names of eating occasions and the time of day at which foods were consumed [29], the study identified foods consumed at lunch. For NSLP participants, lunch intakes could include additional foods that were not part of the school lunch—for example, foods brought from home, obtained outside of school, or purchased at school (such as from a vending machine or snack bar).
This analysis also drew on two other SNMCS data sources. Data on students’ household income and race or ethnicity were obtained from interviews conducted with the parents/guardians, and data on students’ participation in the NSLP on the day covered in the 24 h dietary recall were obtained primarily from school administrative data. When administrative data were not available (for 9 percent of students), the study imputed NSLP participation status using established procedures that consider the types of foods students consumed and the source of those foods [25,29].
The Office of Management and Budget and the New England Institutional Review Board approved the protocol for the SNMCS. The study also followed any institutional review processes a school district required. Passive or active consent (depending on the local school district’s requirements) was obtained from parents and students before collecting the 24-h dietary recall data. The methodology report for the SNMCS describes in detail the study’s design, as well as sampling, recruitment, data collection, and data processing procedures [30]. Additional details about collection and analysis of the data used in this paper are available in Volume 4 of the SNMCS final report [25].

This analysis used the Healthy Eating Index (HEI)-2010 to examine the nutritional quality of students’ diets at lunch and over 24 h. The HEI-2010 measures nutritional quality by assessing how well a set of foods aligns with the 2010 DGAs [31]. The HEI is updated to correspond to each new release of the DGA. The HEI-2010 was used for the analysis because the 2010 DGAs were in place when data for the SNMCS were collected [4]. The HEI-2010 has 12 components—9 adequacy components for foods and dietary components that are encouraged and 3 moderation components for dietary components that should be limited or consumed in small amounts (Table 1) [32]. Each component has standards for achieving the maximum possible score (which ranges from 5 to 20) and for receiving the minimum score of 0. The standards are expressed as densities (typically as amounts per 1000 calories). The density-based standards allow quality to be assessed separately from quantity, which means higher scores cannot be achieved simply by consuming larger amounts of food. Densities between the minimum and maximum standards are scored proportionately. Scores for each component are summed to arrive at the total HEI-2010 score, which has a maximum possible score of 100 and is an overall measure of diet quality. Higher scores for each component and for the total score indicate higher nutritional quality and better conformance with the DGAs. For the adequacy components, higher scores reflect higher intakes; for the moderation components, higher scores reflect lower intakes.

Students were placed in income and race/ethnicity subgroups using data reported by their parent or guardian. Students were categorized as living in households with lower incomes or higher incomes based on their household income relative to the federal poverty level and eligibility for receiving free or reduced-price school meals. Students in the lower-income group had household incomes less than or equal to 185 percent of the federal poverty level and were eligible for free or reduced-price meals; students in the higher-income group had household incomes above 185 percent of the poverty level and were not eligible for free or reduced-price meals. Race/ethnicity subgroups included non-Hispanic White, non-Hispanic Black, Hispanic, and other races (including Asian, American Indian or Alaska Native, Native Hawaiian or other Pacific Islander; and students of multiple or other races).

The NSLP is designed to provide school-age children with access to nutritious meals on school days. Findings from this analysis show that lunches consumed by NSLP participants in most income and race/ethnicity subgroups were of higher nutritional quality than those consumed by nonparticipants. Policymakers, program administrators, and schools should explore ways to increase participation in the NSLP so that more children benefit from the positive influence of the program on lunch intakes. For NSLP participants in all income and race/ethnicity subgroups, the nutritional quality of their 24 h intakes was much lower than that observed at lunch, suggesting that the positive influence of the NSLP on overall diet quality was negatively influenced by foods students consumed the rest of the day (outside of lunch). Nutrition education efforts and interventions with school-age children and their parents should emphasize the importance of consuming healthy foods throughout the day to improve overall diet quality.

This paper was supported by Healthy Eating Research, a national program of the Robert Wood Johnson Foundation.

We thank Dallas Dotter and Mason DeCamillis for providing input on the analytic methods, and Clare Wolfendale for reviewing the analytic code.

The authors declare no conflict of interest. The funding body had no role in the design of the study or the collection, analysis, and interpretation of data, or in writing the manuscript. 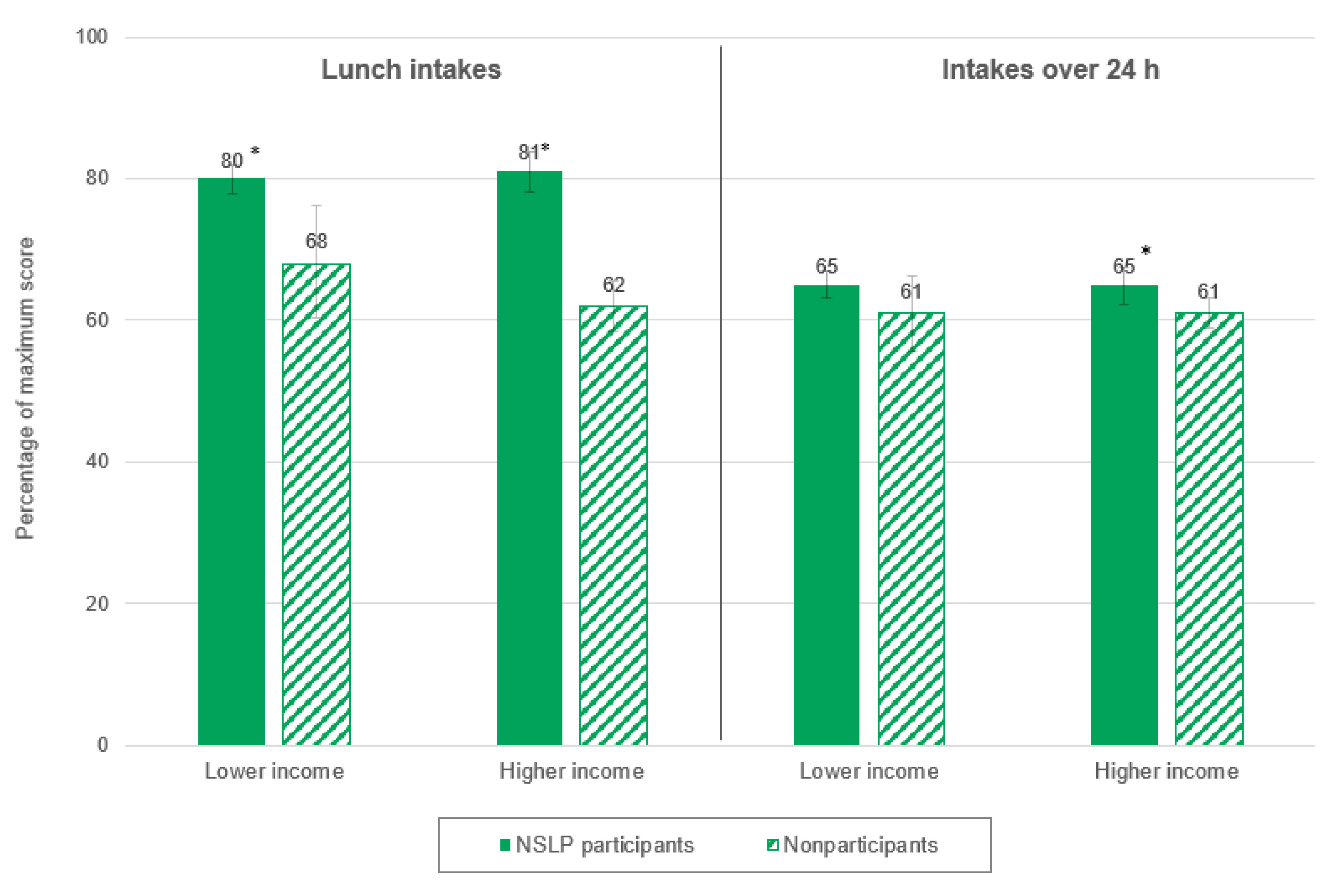 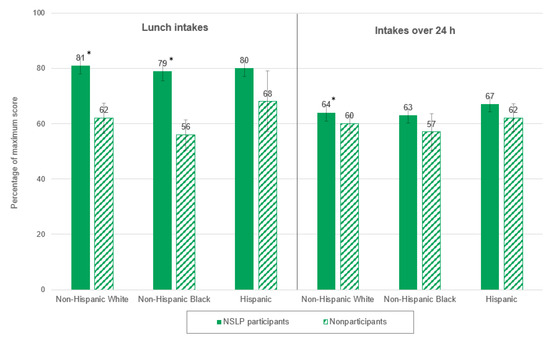