The Origins of Salivary Vitamin A, Vitamin B12 and Vitamin D-Binding Proteins

The proteome of whole mouth saliva (WMS) is vast, consisting of over 2000 species, and sharing approximately 27% homology to that of plasma [1,2]. Proteins enter saliva via a number of routes, with the majority being expressed by salivary gland acinar compartments and secreted by the exocytotic pathway [3]. A number of proteins are translocated into WMS either actively by the salivary gland parenchyma, or passively from the gingival margin, where a serum exudate pools, termed gingival crevicular fluid (GCF) [4]. WMS is the collective product of the three bilaterally paired major salivary glands (parotid, sublingual, and submandibular); collectively these six glands are responsible for 90% of WMS volume which equates to 2 L over 24 h. The remaining volume is provided by the numerous minor glands distributed throughout the oral mucosa, as well as contributions from the GCF, oral microbiome, and the oral epithelium [5]. Many salivary constituents are discretely expressed by the various glands, and the regulation of those glands is controlled by the extrinsic stimuli and circadian rhythm [3,6]. This complex regulation in WMS flow and composition yields a dynamic biofluid which, in health, supports the diverse functions of the oral cavity [7].
A number of vitamin-binding proteins (VBP) are constituents of the salivary proteome. This study focuses on retinol-binding protein (RBP), haptocorrin (Hc), and vitamin D-binding protein (DBP), which are additionally present in the proteome of plasma [1]. Determining the origin of these proteins in saliva would allow their correct quantification and thus how they may relate to circulatory vitamin levels and their potential for indicating vitamin status. Although the function of these three proteins in the circulation has been well studied, their roles, particularly of RBP and DBP have been under explored in the context of the oral cavity [8,9,10,11].
In the circulation, vitamin A (retinol), and the provitamin A retinoids are highly hydrophobic and therefore have low solubility in blood but this is improved by binding RBP. The retinol–RBP complex further recruits another binding protein termed transthyretin; the large collective molecular weight prevents its removal from the circulation during glomerular filtration, thus enhancing the circulatory half-life of retinol [12]. In addition to its role in retinoid transport, it is also suggested that RBP is an adipokine, and an indicator of insulin resistance in type 2 diabetes [9,13]. Clinical assessment of an individual’s vitamin A status commonly involves measuring total retinol in the circulation which correlates well with RBP, however the relationship between vitamin A status and RBP concentration in other biofluids is unclear [14].
Hc, or R-binder, is a highly glycosylated protein with two domains, which binds vitamin B12 and its analogues, with low specificity [15]. In the circulation, 80–90% of vitamin B12 is bound to Hc, which circulates with almost fully saturated B12 binding sites. However, this fraction is not accessible to cells and a receptor for the complex is unknown [16,17,18]. The remaining 10–20% of B12 is bound to transcobalamin (TCN), and this is the biologically active fraction of B12 [18]. Due to being the major circulatory carrier of B12, and the high degree of saturation, Hc concentration correlates well with the commonly used marker of B12 status, total vitamin B12 [19,20,21]. Hc has been more widely detected in the proteomes of other biofluids including gastric fluid, lacrimal and nasal secretions, as well as breast milk and seminal plasma [22,23,24,25]. In the upper digestive tract, Hc binds dietary vitamin B12 and protects it against hydrolysis in the acidic milieu of the stomach [26]. Its low specificity between vitamin B12 analogues, and ubiquitous secretion onto mucosal surfaces, suggests it functions as an innate antimicrobial, possibly by sequestering analogues essential for many bacterial species; data to support this hypothesis however, are limited.
DBP, also referred to as Gc-globulin, is the major carrier of vitamin D metabolites in the circulation, binding ~75% [27,28]. Vitamin D denotes a group of hydrophobic sercosteroids and therefore their solubility in plasma is enhanced by binding DBP. DBP circulates in apparent excess with 97–98% of vitamin-binding sites being unoccupied at a healthy vitamin D level, possibly due to the multifunctionality of the protein [29,30]. Beyond vitamin D binding, DBP also sequesters free actin monomers, is a potent activator of macrophages, and enhances complement mediated neutrophil chemotaxis [8,31]. DBP is also detectable in plasma, GCF, and saliva [32]. It is widely agreed that 25-OH-D is a robust and commonly employed biomarker for vitamin D status, and previous studies have indicated significant positive correlations to plasma concentrations of DBP [33,34].
The aim of this study was to understand if these VBP are produced by salivary glands or are merely exudated from serum. Secondly, we address their potential use in predicting vitamin status.

In order to address the aims of this study, cross sectional analyses were undertaken.

Self-declared healthy staff and students were recruited internally at King’s College London to participate in this study. Volunteers were selected for participation if they were in good general health with no history of gastro-intestinal disorders, and not currently taking medication or vitamin supplements. All samples were collected in January 2018.

One female and one male participant were asked to provide resting and chew stimulated WMS samples as described above. Additionally, parotid gland secretions were collected by attaching Lashley cups (by suction) to the papillae of the Stensen’s ducts located on the buccal mucosa adjacent to the second molar on each side of the upper arch. Once Lashley cups were fitted, participants rinsed their mouths by swilling 10 mL of water before sample collection. For a duration of 10 min resting parotid saliva was collected via the Lashley cup apparatus, and WMS excluding the parotid secretion (we now term WMS xP) by expectoration into a pre-weighed sterile tube. This collection process was repeated, this time with chew stimulated flow with the use of flavourless paraffin gum. As described previously, flow rates were calculated, debris was precipitated, and sample aliquots stored at −80 °C until testing.

Six and eight, self-reported, healthy female and male participants, respectively, were asked to refrain from consuming food or drink (excluding water) for eight hours prior to sample collection. Resting WMS samples were provided and processed as described above. Venous blood (17 mL) was collected into serum separator tubes (Becton, Dickinson and Company, Franklin Lakes, NJ, USA) with butterfly needle safety collection kits. As per manufacturer instructions, samples were centrifuged at 2000× g for 10 min, and the serum was then aliquoted and stored at −80 °C until testing.

2.2.4. Quantification of Total Vitamin B12 & 25-OH-D by Chemiluminescent Microparticle Immunoassay

Total vitamin B12, and 25-hydroxyvitamin D were quantified in serum samples as markers of systemic vitamin B12 and vitamin D status, respectively. Quantification was undertaken by chemiluminescent microparticle immunoassay (CMIA) on an ARCHITECT iSystem (Abbott Diagnostics, Maidenhead, UK). After pre-treatments steps which included the release of vitamins from their binding proteins, vitamins were bound to intrinsic factor (vitamin B12 assay) or anti-vitamin D (vitamin D assay) coated microparticles. Incubation and wash steps followed, before the addition of a conjugate containing acridinium tracer. After further incubation and washing, hydrogen peroxide was added to each sample cup inducing a chemiluminescent reaction which is measured in relative light units (RLUs). RLUs have an inverse relationship to the amount of analyte tested and the RLUs detected by the ARCHITECT iSystem optics.

Statistical analysis was undertaken using Prism 7 for Mac OS X Version 7.0a 2 April 2016 (GraphPad Software, San Diego, CA, USA). Normality of data was tested with Q-Q plots and the Shapiro–Wilk test. Statistical difference between groups was determined by a paired t-test. Correlations between parameters were assessed by simple linear regression.

Ethical approval for this study was obtained from the Biomedical Sciences, Medicine, Dentistry and Natural and Mathematical Sciences subcommittee of the King’s College London Research Ethics Committee (Reference: BDM/14/15-61) and the study protocol was designed following the King’s College London Guidelines on Good Practice in Academic Research. In accordance with the Declaration of Helsinki (2013), participants provided informed consent, and all samples were handled in accordance with the Human Tissue Act (2004).

To examine the source of the VBP in saliva, concentrations were measured in resting and chewing-stimulated saliva (Table 1). If these proteins were leaking into WMS from the serum compartment via the gingival crevicular fluid, it would not be expected for their output to increase with increasing salivary flow.
In the first group of healthy subjects presented in Table 1 (five males; five females), the mean resting salivary flow rate was 0.7 mL/min, which significantly (p < 0.01) increased to 1.95 mL/min when stimulated with chewing flavourless paraffin gum. Inversely, upregulation of salivary flow demonstrated significant decreases in total protein concentration (p < 0.05); however, when taking into account the increased flow rate, total protein output increased significantly (p < 0.01).
RBP, Hc, and DBP concentrations and outputs were then compared in resting and chew-stimulated whole mouth saliva (Figure 1).
Of the three VBP measured, only the concentration of Hc significantly decreased when the salivary flow rate was upregulated by chewing; no significant differences were observed for DBP or RBP concentrations. The outputs of RBP, Hc, and DBP increased significantly between resting and stimulated flow with p values of <0.05, <0.05, and <0.0001, respectively.
To further understand the contribution of the different major salivary glands to the WMS VBP concentration, parotid saliva (P) was collected separately from submandibular and sublingual secretions. Whole mouth saliva samples were then compared to P and WMS without parotid saliva (WMS xP) at rest and when stimulated by chewing (Figure 2).
When compared to resting saliva flow rate, chewing upregulated flow rate in all study participants. In agreement with the first part of the study, the total protein concentration went down with increased flow rate, but the total protein output increased for all glands. Likewise, all VBP increased in output with chewing stimulation with the exception of parotid contribution to DBP which did not change from the resting output.
To further understand the origin of VBP, the salivary concentration and output for each salivary VBP was compared to its serum concentration, and vitamin status in a different group of 14 healthy participants (Table 2).
Serum concentrations of retinol, total vitamin B12, and 25-OH-D were all normally distributed when assessed by Q-Q plots, and the Shapiro–Wilk test. Retinol results ranged between 1.44 and 2.69 μmol/L, all patients were in the sufficient range of 1.4–3.84 μmol/L. Total vitamin B12 results ranged from 116 to 219 pmol/L, with three participants having results indicative of deficiency, <138 pmol/L [35]. 25-OH-D results ranged from 7 to 72 nmol/L; four participants had sufficient concentrations > 50 nmol/L, four participants had insufficient concentrations between 30 and 50 nmol/L, and five participants had deficient concentrations < 30 nmol/L.
Of the three VBD assessed, only DBP correlated significantly between saliva and serum (Figure 3). Serum DBP correlated more strongly with salivary DBP output (r2 = 0.45, p < 0.01) than salivary concentration (r2 = 0.33, p < 0.05). Concentrations of the other salivary VBP did not show significant linear relationships with serum markers of vitamin status.
The salivary concentrations and outputs of the VBP were then compared to serum concentrations of their vitamins (Figure 4).
Serum RBP, and Hc significantly correlated with retinol (r2 = 0.48, p < 0.01) and total vitamin B12 (r2 = 0.50, p < 0.01), respectively, which complements previous studies [19,36]. Correlations have been shown previously between serum DBP and 25-OH-D; however, the relationship presented here is not significant [37]. No significant linear relationships were found between serum markers of vitamin status and salivary VBP concentrations or outputs.

This work was supported by the Biotechnology and Biological Sciences Research Council (BBSRC) and GlaxoSmithKline (GSK) (BB/M503071/1).

We would like to thank The Nutristasis Unit staff for their help with the analyses of serum vitamin A, B12 and 25-OH-D as well as all the volunteers for their participation in this study. We are also grateful for the financial support provided by BBSRC and GSK. 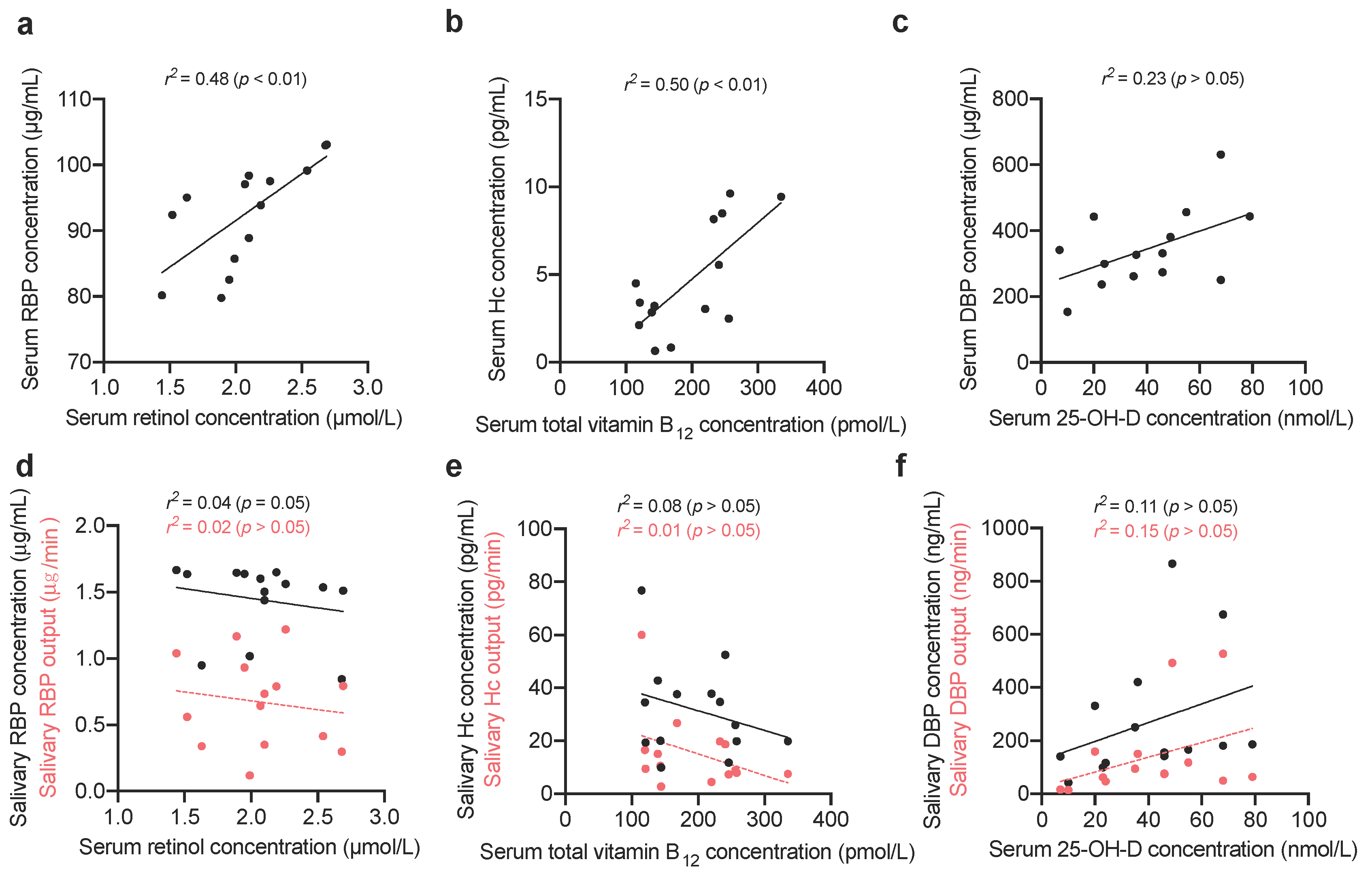