Lipidemic Profile Changes over a Two-Year Intervention Period: Who Benefited Most from the Feel4Diabetes Program?
Previous Article in Journal

Serum Vitamins D, B9 and B12 in Greek Patients with Inflammatory Bowel Diseases

Non-Celiac Gluten Sensitivity in the Context of Functional Gastrointestinal Disorders

Gluten-free diets are increasingly chosen in the Western world, even in the absence of a diagnosis of celiac disease. Around 10% of people worldwide self-report gluten-related complaints, including intestinal and extra-intestinal symptoms. In most cases, these subjects would be labeled as patients suffering from irritable bowel syndrome (IBS) who place themselves on a gluten-free diet even in the absence of celiac disease. In some instances, patients report a clear benefit by avoiding gluten from their diet and/or symptom worsening upon gluten reintroduction. This clinical entity has been termed non-celiac gluten sensitivity (NCGS). The symptoms referred by these patients are both intestinal and extra-intestinal, suggesting that similarly to functional gastrointestinal disorders, NCGS is a disorder of gut–brain interaction. It remains unclear if gluten is the only wheat component involved in NCGS. The mechanisms underlying symptom generation in NCGS remain to be fully clarified, although in the past few years, the research has significantly moved forward with new data linking NCGS to changes in gut motility, permeability and innate immunity. The diagnosis is largely based on the self-reported reaction to gluten by the patient, as there are no available biomarkers, and confirmatory double-blind challenge protocols are unfeasible in daily clinical practice. Some studies suggest that a small proportion of patients with IBS have an intolerance to gluten. However, the benefits of gluten-free or low-gluten diets in non-celiac disease-related conditions are limited, and the long-term consequences of this practice may include nutritional and gut microbiota unbalance. Here, we summarize the role of gluten in the clinical features, pathophysiology, and management of NCGS and disorders of gut–brain interaction. View Full-Text
Keywords: functional gastrointestinal disorders; disorders of gut-brain interaction; diet; gluten; IBS; DGBI; NCGS functional gastrointestinal disorders; disorders of gut-brain interaction; diet; gluten; IBS; DGBI; NCGS
►▼ Show Figures 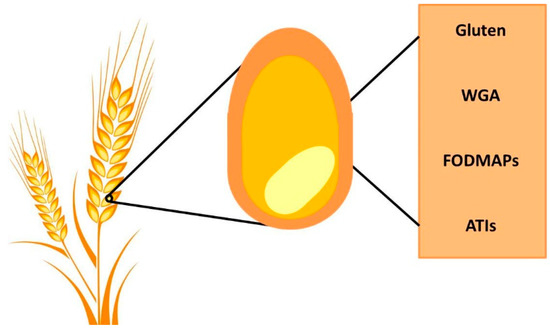