The Gut Microbiome and the Big Eight
Previous Article in Journal

There is evidence in rodents to suggest that theacrine-based supplements modulate tissue sirtuin activity as well as other biological processes associated with aging. Herein, we examined if a theacrine-based supplement (termed NAD3) altered sirtuin activity in vitro while also affecting markers of mitochondrial biogenesis. The murine C2C12 myoblast cell line was used for experimentation. Following 7 days of differentiation, myotubes were treated with 0.45 mg/mL of NAD3 (containing ~2 mM theacrine) for 3 and 24 h (n = 6 treatment wells per time point). Relative to control (CTL)-treated cells, NAD3 treatments increased (p < 0.05) Sirt1 mRNA levels at 3 h, as well as global sirtuin activity at 3 and 24 h. Follow-up experiments comparing 24 h NAD3 or CTL treatments indicated that NAD3 increased nicotinamide phosphoribosyltransferase (NAMPT) and SIRT1 protein levels (p < 0.05). Cellular nicotinamide adenine dinucleotide (NAD+) levels were also elevated nearly two-fold after 24 h of NAD3 versus CTL treatments (p < 0.001). Markers of mitochondrial biogenesis were minimally affected. Although these data are limited to select biomarkers in vitro, these preliminary findings suggest that a theacrine-based supplement can modulate select biomarkers related to NAD+ biogenesis and sirtuin activity. However, these changes did not drive increases in mitochondrial biogenesis. While promising, these data are limited to a rodent cell line and human muscle biopsy studies are needed to validate and elucidate the significance of these findings.
Keywords: theacrine; mRNAs; sirtuins; mitochondria theacrine; mRNAs; sirtuins; mitochondria

Skeletal muscle aging is associated with numerous factors including (but not limited to) age-associated alterations in circulating hormones, low-grade inflammation, mitochondrial perturbations via free radicals, and transcriptomic alterations due to epigenetic factors (reviewed in [1,2,3]). There are various nutritional supplements geared towards affecting biomarkers associated with tissue aging in general, and several of these supplements act through reducing inflammation (e.g., curcumin, [4]), diminishing oxidative stress (e.g., vitamins C and E, [5]), and enhancing mitochondrial function (e.g., coQ10 and quercetin, [6,7]).
Sirtuins are a class of proteins (SIRT1-7) that exist in various subcellular compartments and possess either mono-ADP-ribosyltransferase or deacetylase activity [8]. Research dating back to the 1970s across several organismal models have indicated that sirtuins are involved in the tissue aging process; specifically, stressors that activate sirtuin activity are largely thought to promulgate anti-aging effects [9]. Thus, there has also been a widespread interest in identifying nutritional supplements that increase cellular sirtuin activity and/or nicotinamide adenine dinucleotide (NAD+) levels given that NAD+ increases sirtuin activity [10,11].
Theacrine is a purine alkaloid that is structurally similar to caffeine, and various studies have examined its efficacy as a neuroactive ingredient [12,13,14]. Aside from potential neurotrophic effects, there are limited data in rodents suggesting theacrine-based supplements can reduce inflammation [15,16], modulate mitochondrial function [17], and activate sirtuins [17]. However, it is currently unclear how theacrine-based supplements affect the biomarkers related to these processes in skeletal muscle. Therefore, the purpose of this rapid report was to assess how a theacrine-based supplement (NAD3) affected markers of sirtuin activity and mitochondrial biogenesis skeletal muscle cells in vitro.

Cell culture methods were performed similarly to other studies published by our laboratory [18,19]. Briefly, C2C12 myoblasts (passage 6; American Type Culture Collection, Manassas, VA, USA), were seeded in Dulbecco’s Modified Eagle Media (DMEM) with 10% FBS, 1% penicillin/streptomycin, and 0.1% gentamycin ((Corning Inc., Corning, NY, USA) on six-well plates at a seeding density of 3 × 105 under standard culture conditions (37 °C in a 5% CO2 atmosphere). Once myoblast growth reached 80–90% confluence ~48 h after seeding, differentiation was induced by removing the growth medium and replacing it with a differentiation medium (DM; DMEM, 2% (v/v) horse serum, 1% penicillin/streptomycin, and 0.1% gentamycin). DM was then replaced every 24 h for 7 days to allow for adequate myotube growth.

Treatments occurred on day 7 post-differentiation for either 3 or 24 h with either 0.45 mg/mL of NAD3 (containing ~2 mM theacrine; Compound Solutions, Carlsbad, CA, USA) (n = 6 treatment wells per time point) or a weight-equivalent of cellulose-only (n = 6 treatment wells per time point) suspended in DM. Notably, we opted not to resuspend the treatments in a vehicle prior to adding these agents to DM (e.g., ethanol or dimethylsulfoxide) given the potential cytotoxic effects of vehicle compounds. Rather, NAD3 or cellulose were added to DM in 50 mL tubes, tubes were centrifuged for 5 min at 100× g to remove any insoluble material, and the supernatant was used as the treatment media. Notably, the investigators were blinded to treatments until the conclusion of the study and after statistical analyses were performed.

After all treatments, the differentiation/treatment media were removed, and the cells were washed once with phosphate-buffered saline (PBS). Thereafter, the PBS was siphoned off and then a subset of cells were scraped from a plate and transferred into 250 µL of Trizol for RNA isolation. Following Trizol-based RNA isolation methods, total RNA concentrations were analyzed using a Nanodrop Lite spectrophotometer (Thermo Fisher Scientific, Waltham, MS, USA), and 1 µg of cDNA was synthesized using a commercial qScript cDNA SuperMix (Quanta Biosciences, Gaithersburg, MD, USA) per the manufacturer’s recommendations. Real-time PCR was performed using gene-specific primers and SYBR green chemistry, and all PCR reactions were confirmed to produce only one melt product. Primer sequences can be found in the Supplemental Data. Relative expression values were performed using the 2−ΔΔCT method where 2−ΔCT (housekeeping gene CT—gene of interest CT) and 2−ΔΔCT (or fold change) = (2−ΔCT value/2−ΔCT average of control treatment). Cyclophilin (Ppia) was used as a housekeeping gene.
After the RNA scrape described above, 250 µL of ice-cold cell lysis buffer was applied to each well (20 mM Tris·HCl (pH 7.5), 150 mM NaCl, 1 mM Na-EDTA, 1 mM ethylene glycol-bis(β-aminoethyl ether)-N,N,N′,N′-tetraacetic acid, 1% Triton, 20 mM sodium pyrophosphate, 25 mM sodium fluoride, 1 mM β-glycerophosphate, 1 mM Na3VO4, and 1 µg/mL leupeptin; Cell Signaling; Danvers, MA, USA). Plates were then scraped, and the cell slurry was removed and placed in 1.7 mL tubes. Cells were homogenized via micropestles, and homogenates were subsequently centrifuged at 500× g for 5 min. After centrifugation, insoluble proteins were pelleted, and the supernatants containing solubilized cell material were placed in new 1.7 mL tubes and stored at −80 °C until the global sirtuin (SIRT) activity and citrate synthase assays were performed as described below.

Global SIRT activity levels were performed on cell lysis buffer lysates using a commercial assay (Abcam, Danvers, MA, USA; catalog#: Ab156915) similar to previous methods published by our laboratory [20]. Prior to performing the assay, protein concentrations of supernatants were determined using a BCA assay (Thermo Fisher Scientific). Lysates (8 μL) were loaded in duplicate onto 96-well plates provided by the kit for enzymatic reactions as well as a no SIRT co-factor control reaction (also called an NNC reaction, or an internal negative control reaction). Following the execution of the assay as per the manufacturer’s recommendations, absorbances were read at OD450 using a plate reader (BioTek Synergy H1). NNC optical density (OD) values were subtracted from enzymatic reaction OD values, and these values are presented in the results section as OD450 per μg protein. The average coefficient of variation (CV) values for all duplicates was 10.3%.
Citrate synthase activity levels were determined in duplicate on lysates from 24 h treatments only; notably, these methods are similar to previous methods used by our laboratory [20]. This metric was used as a surrogate for mitochondrial density as per the findings of Larsen et al. [21], suggesting that citrate synthase activity strongly correlates with transmission electron micrograph images of intracellular space occupied by mitochondria (r = 0.84, p < 0.001). The assay principle is based on the reduction of 5,50-dithiobis (2-nitrobenzoic acid) (DTNB) at 412 nm (extinction coefficient 13.6 mmol/L/cm) coupled to the reduction of acetyl-CoA by the citrate synthase reaction in the presence of oxaloacetate. Briefly, protein obtained from lysates was added to a mixture composed of 0.125 mol/L Tris–HCl (pH 8.0), 0.03 mmol/L acetyl-CoA, and 0.1 mmol/L 5,5′-dithiobis-(2-nitrobenzoic acid). All reactions occurred in 96-well plates, reactions were initiated by the addition of 5 μL of 50 mmol/L oxaloacetate per well, and the absorbance change was recorded for 60 s in a spectrophotometer (BioTek Synergy H1). The average CV values for all duplicates was less than 10%.

To validate some of our qPCR targets identified above, we performed follow-up experiments in myotubes derived from C2C12 myoblasts 7 days post-differentiation (ATCC, passage 2) (Table S1). Due to limited resources, we only performed NAD3 or control (CTL) treatments for 24 h. The assayed protein targets for these experiments included SIRT1/6 protein levels (given the Sirt1 mRNA alterations) as well as PGC1-α and NRF2 protein levels (as markers of mitochondrial biogenesis). We also opted to interrogate nicotinamide phosphoribosyltransferase (NAMPT) protein levels, given its role in NAD+ synthesis.
Western blotting was performed in an identical fashion to previous studies performed in our laboratory. For experimental details, readers should refer to [20,22]. Notably, densitometry values for each target were quantified using a gel documentation system and imaging software (Image Lab; BioRad, Hercules, CA, USA). Likewise, Ponceau images were also obtained to ensure the equal loading of proteins, and the density of each target of interest was divided by Ponceau density to obtain a relative expression value. The primary antibodies chosen for the molecular targets were as follows: SIRT1, rabbit IgG (Cell Signaling, Danvers, MA, USA; cat# 9475); SIRT6, rabbit IgG (Cell Signaling; cat# 3868); NAMPT, rabbit IgG (Abcam, Cambridge, MA, USA; catalog#: Ab45890); NRF2, rabbit IgG (Novus Biologicals; catalog#: NBP1-32822); PGC1-α, rabbit IgG (Novus Biologicals; catalog#: NBP1-04676B).
Cells treated with NAD3 or CTL for 24 h were also assayed for cellular NAD+, NADH, and NADt (NAD+ + NADH) concentrations using an enzymatic kit (Abcam; cat# ab65348) and methods previously described by our laboratory [20]. Raw absorbance values provided for each variable were normalized to the average of the control condition and expressed as relative concentrations.

All statistical analyses were performed using SPSS v25.0 (IBM Corp, Armonk, NY, USA). The 3 h and 24 h data were analyzed independently between treatments using independent samples t-tests. All data are presented in figures and tables as the means ± standard deviation (SD) values, and statistical significance was established as p < 0.050.

There are limitations to the current data. First, these data are in vitro, and muscle biopsy studies in humans are needed to confirm and refine the current findings. Another limitation to these data is that only select biomarkers were interrogated in one cell type. Thus, more studies are needed to extensively assess the molecular alterations induced by NAD3 treatments in human cell lines as well as multiple cell types. Moreover, while there are seven sirtuin isotypes, qPCR was performed on only three of these isotypes due to RNA yield limitations, and follow-up Western blotting was performed on SIRT1/6 due to resource constraints. Notwithstanding, these preliminary findings regarding the effects of a theacrine-based supplement global sirtuin activity, NAMPT protein levels, and cellular NAD+ concentrations are promising and warrant future research in vivo.

Although these data are in vitro, this preliminary evidence suggests a theacrine-based supplement can increase SIRT activity, NAMPT protein levels, and cellular NAD+ concentrations. However, and as mentioned prior, human studies are needed to validate the current findings.

Costs for cells and reagents were funded by a grant provided to M.D.R. by Compound Solutions (Carlsbad, CA, USA) and JUVN3 Holdings.

M.D.R. has been a paid consultant in the past by the funding entity for scientific writing endeavors. Additionally, the funding entities have committed a multiple-year laboratory donation to the laboratory of M.D.R. for graduate student development, assay development, and equipment purchases. However, M.D.R. affirms that the current data do not present a conflict of interest with these additional activities. 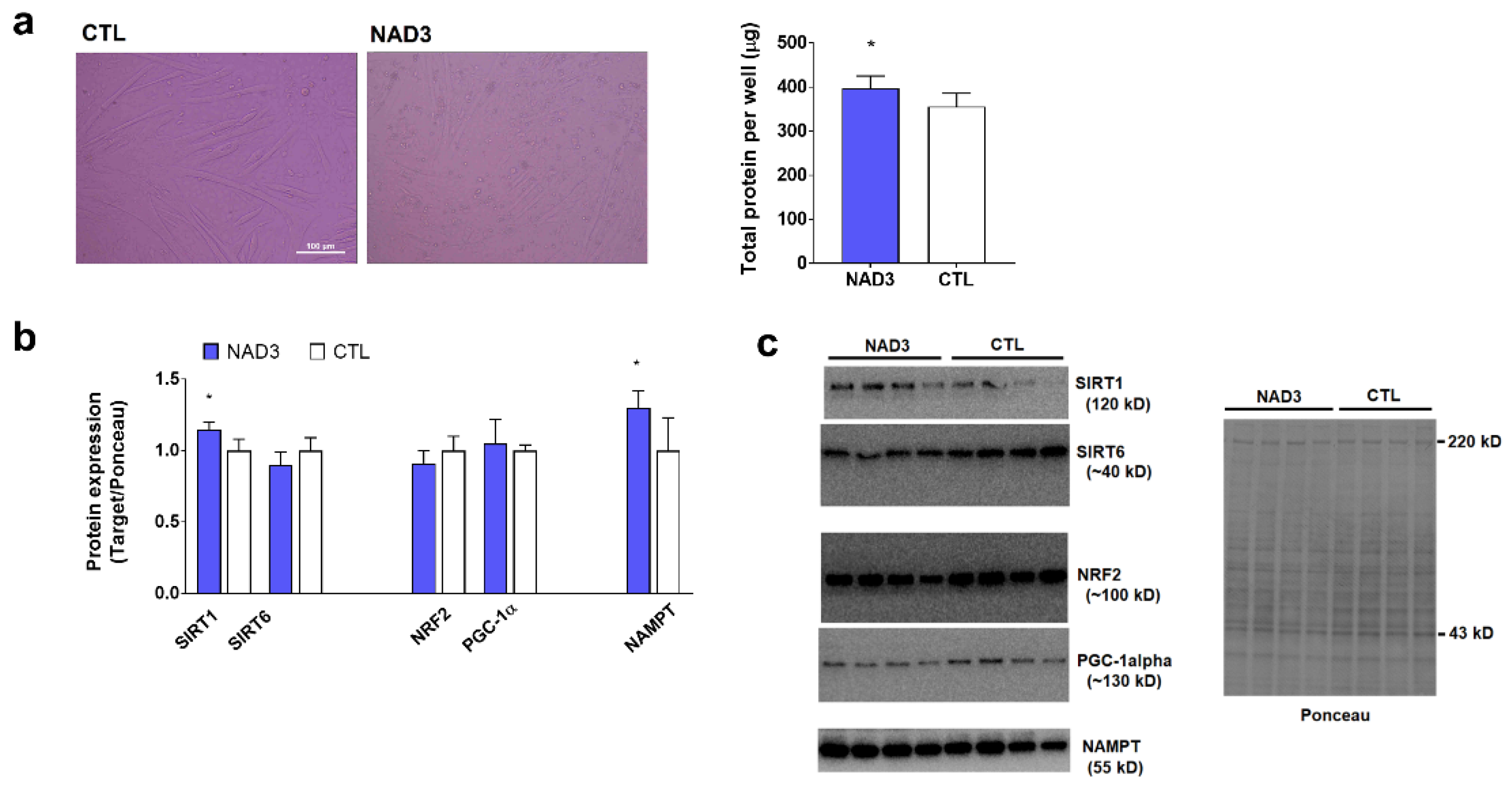 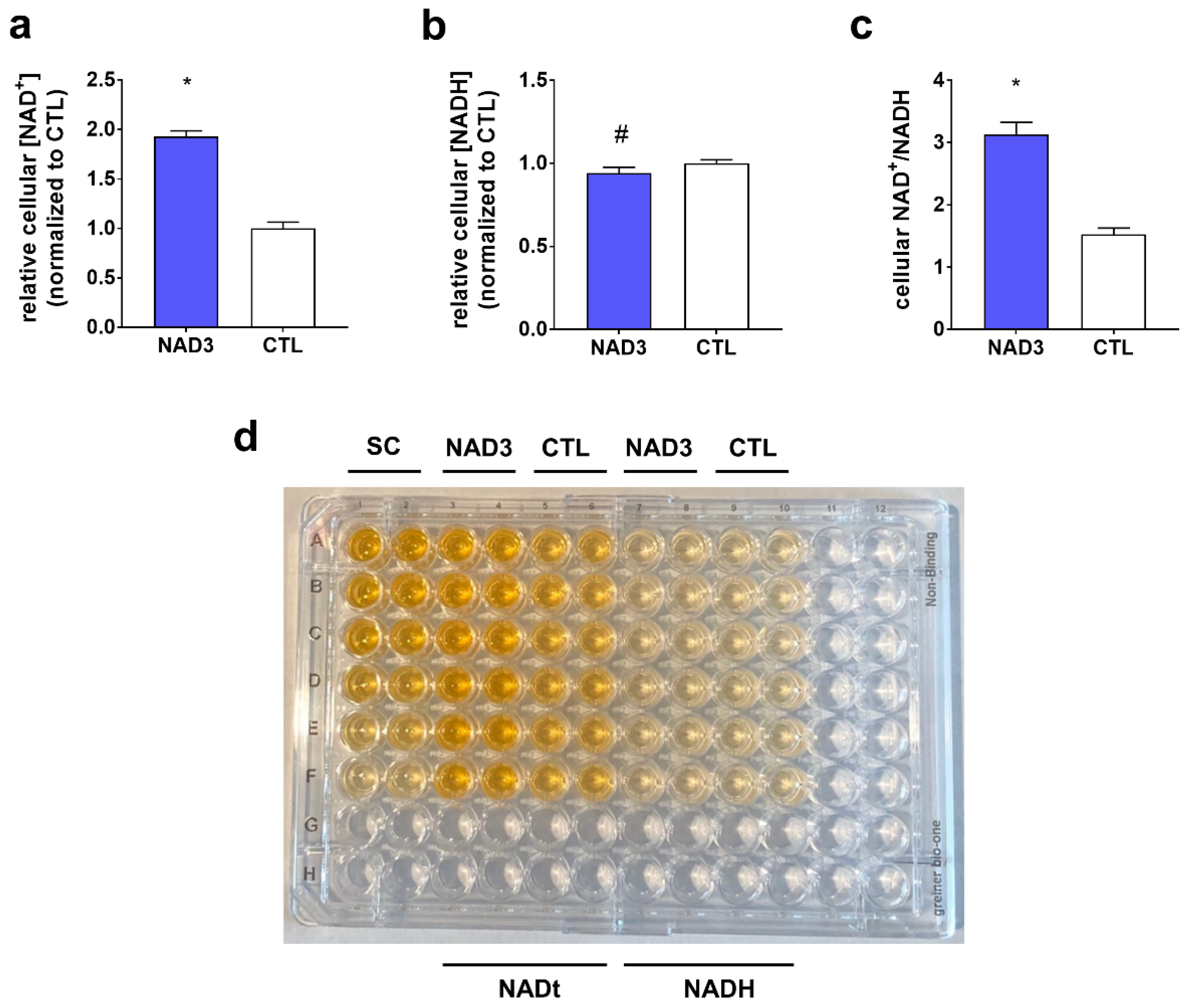