Association of Milk Consumption and Vitamin D Status in the US Population by Ethnicity: NHANES 2001–2010 Analysis
Next Article in Special Issue

Fighting Sarcopenia in Ageing European Adults: The Importance of the Amount and Source of Dietary Proteins

Essential Amino Acids and Protein Synthesis: Insights into Maximizing the Muscle and Whole-Body Response to Feeding

Amino acids are the fundamental constituents of body proteins and serve as substrates for protein synthesis. Nine amino acids are considered essential amino acids (EAA), meaning they cannot be synthesized de novo, or the synthesis rate does not adequately meet the body’s demand. Therefore, EAA must be obtained through dietary protein. Dietary protein formats have a wide variance of EAA content, digestion, and absorption kinetics that can be used to meet EAA requirements [1].
The net balance between muscle protein synthesis (MPS) and breakdown (MPB) distinguishes the anabolic (synthesis exceeds breakdown) and the catabolic (breakdown exceeds synthesis) states. Since nonessential amino acids are normally readily available in muscle, the intracellular appearance of EAA derived from MPB or inward influx from plasma govern the anabolic response [2]. The possible fates of intracellular EAA are protein synthesis via charging the appropriate transfer ribonucleic acid (tRNA), oxidation, or efflux back to plasma. In the post-absorptive state, the primary source of intracellular EAA appearance is the accelerated rate of MPB, which is the principal determinant of the amount of intracellular EAA available as precursors for MPS [3]. Since intracellular amino acid recycling is not 100% efficient, MPB will always exceed MPS in the post-absorptive state, resulting in a net loss of muscle protein. In order to replace the lost muscle protein, exogenous EAA are required to increase circulating concentrations to induce a stimulation in MPS [4], while simultaneously reducing MPB [5,6,7]. Thus, dietary EAA are the primary stimuli for an increase in MPS and subsequent expansion of the skeletal muscle protein pool [5,6]. In addition to its role in functionality, skeletal muscle serves as a reservoir of EAA for splanchnic organs and tissue during periods of stress or insufficient dietary intake [8].
Skeletal muscle accounts for a significant portion of protein in the body, but other tissues may account for more than half the total protein turnover in the body. Recent investigations have demonstrated multiple tissues with higher turnover rates than skeletal muscle [9,10,11]. Estimates of the contribution of skeletal muscle to whole-body protein turnover range considerably (25–50%), and likely dependent upon metabolic status [12,13], and in part the tracer methodology used to quantify whole-body and MPS rates. Considering the important role of the body protein pool during catabolic stress and anabolic resistance, it is important to understand the effects of dietary EAA intakes on muscle and whole-body protein synthesis. It is also important to note that the measurement of muscle and whole-body protein synthesis are indications of protein turnover, not anabolism. Anabolism cannot be ascertained unless both protein synthesis and breakdown rates are measured. Measurement of MPB following a meal is only possible using arterial and venous catheterization, and available data using this invasive approach are limited. MPB rate can only be measured in the post-absorptive state [14,15,16,17]. Whole-body protein breakdown can be ascertained, but requires certain assumptions that are controversial [18,19,20,21]. Therefore, we chose to focus on the relationship between EAA availability and the measurement of protein synthesis according to established isotope methodology [22].

The present study includes data from previously published studies from our lab [23,24,25,26]. Participant demographics and treatments are outlined in Table 1. Written informed consent was obtained from all subjects, and studies were approved by the Institutional Review Board (#89220, 205336, 206579, 206814, and 217658) at the University of Arkansas for Medical Sciences. Participants were healthy young or older males who had refrained from physical activity for at least 72-h. Studies were conducted after an overnight fast, and isotope infusion was utilized to determine mixed MPS and whole-body protein synthesis.

Studies were conducted after an overnight fast, and isotope infusion was utilized to determine mixed MPS and whole-body protein synthesis. Two intravenous catheters were placed; one in the antecubital space for the continuous isotope infusions, and the second in the contralateral dorsal hand vein for serial blood draws. The dorsal hand vein was kept warm using heating pads to reflect arterialized blood [27]. After collecting the baseline blood sample, primed, constant infusions of L-(ring-2H5)-phenylalanine and L-(3,3-2H2)-tyrosine were started and maintained. A priming dose of L-(ring-2H4)-tyrosine was also administered at the same time to achieve isotopic equilibrium of L-(ring-2H4) tyrosine enrichment derived from L-(ring-2H5)-phenylalanine for the measurement of phenylalanine hydroxylation. All isotopes were purchased from Cambridge Isotope Laboratories (Andover, MA, USA) and the preparations were constituted by the research pharmacist at UAMS.

Plasma was precipitated with 125 µL of 10% sulfosalicylic acid (SSA), centrifuged, and the supernatant was used to determine EAA concentrations using the internal standard technique [28]. Phenylalanine and tyrosine enrichments were measured using the tert-butyldimethylsilyl derivative and gas chromatography-mass spectrometry. Ions of mass-to-charge ratio of 234, 235, and 239 for phenylalanine and of 466, 467, 468, and 470 for tyrosine were monitored with electron impact ionization and selective ion monitoring. Serum insulin concentrations were measured using a Siemens Immulite 2000 XPi (Siemens Medical Solutions USA, Inc., Malvern, PA, USA).
Muscle samples were weighed, and tissue proteins were precipitated with 0.5 mL of 4% SSA. Samples were then homogenized, centrifuged, and the muscle pellet (bound protein) was washed, dried, and hydrolyzed in 0.5 mL of 6 N HCl at 105 °C for 24-h. Mixed muscle-bound protein enrichments were determined as described above for plasma enrichments.

The precursor-product model was used to determine mixed MPS (i.e., fractional synthetic rate) [29]:
Mixed MPS (%/h) = ((EBP2 − EBP1)/(Ep)) × 60 × 100,
where EBP1 and EBP2 are the enrichments of bound L-(ring-2H5)-phenylalanine in muscle collected in the postabsorptive and postprandial states. In the postprandial state, the precursor enrichment (Ep) is the calculated area under the curve (AUC) for L-(ring-2H5)-phenylalanine enrichment in the plasma since it more accurately reflects the blood perturbations consistent with our and others’ previous work [23,24,25,30,31]. Factors 60 and 100 were used to express mixed MPS as percent per hour. Both the postprandial FSR and change in FSR (ΔFSR) were used for statistical analysis.

This work extends previous findings denoting the relationship between peripheral EAA concentrations and FSR by outlining responses to various formats of EAA intake. Our regression equations indicate that a 100% increase in peripheral EAA concentrations results in approximately a 34% increase in FSR from post-absorptive conditions. The present analysis expands upon previous findings by demonstrating that this relationship also extends to whole-body protein synthesis over a wide range of EAA sources. These findings also demonstrate that ingestion formats with a high proportion of EAA relative to total protein content represent a viable means of improving muscle and whole-body protein synthetic responses. Taken together, EAA sources that produce a large and rapid increase in peripheral EAA concentrations are recommended to improve muscle and whole-body protein synthesis.

We would like to thank the research volunteers for their willingness to participate in these studies. We thank the research staff and associates for their assistance in conducting tracer infusion protocols: Cosby J. Lasley for coordinating study subjects; Rick Williams for gas- and liquid-chromatography mass-spectrometry analysis; and we thank Deb Viane for her support and administrative assistance. The opinions or assertions contained herein are the private views of the authors and are not to be construed as official or as reflecting the views of the Army or the Department of Defense. Any citations of commercial organizations and trade names in this report do not constitute an official Department of the Army endorsement of approval of the products or services of these organizations.

D.D.C., K.R.H., S.P., I.-Y.K., J.A.G., and S.M.P. have no conflict of interest to declare. R.R.W. is an inventor of United States patent 16; 382,984 entitled “Composition for Stimulating Muscle Growth, Repair, and Maintenance,” US Patent (16; 382,984). AAF and RRW are listed as inventors on United States patent 9364463 B2 entitled “Use of amino acid supplementation for improved muscle recovery,” and United States patent application 20200253908 entitled “Use of amino acid supplementation for improved muscle protein synthesis.” RRW is a shareholder in Essential Blends, LLC, and The Amino Company, Inc. R.R.W. has received research grants, travel expenses, and honoraria from the National Cattleman’s Beef Checkoff Program. A.A.F. has received research grants from the National Pork Board and Egg Nutrition Center. All funders had no role in the design of the study; in the collection, analyses, or interpretation of data; in the writing of the manuscript; or in the decision to publish the results. 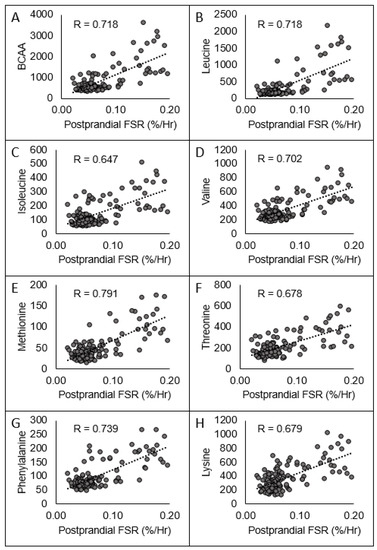 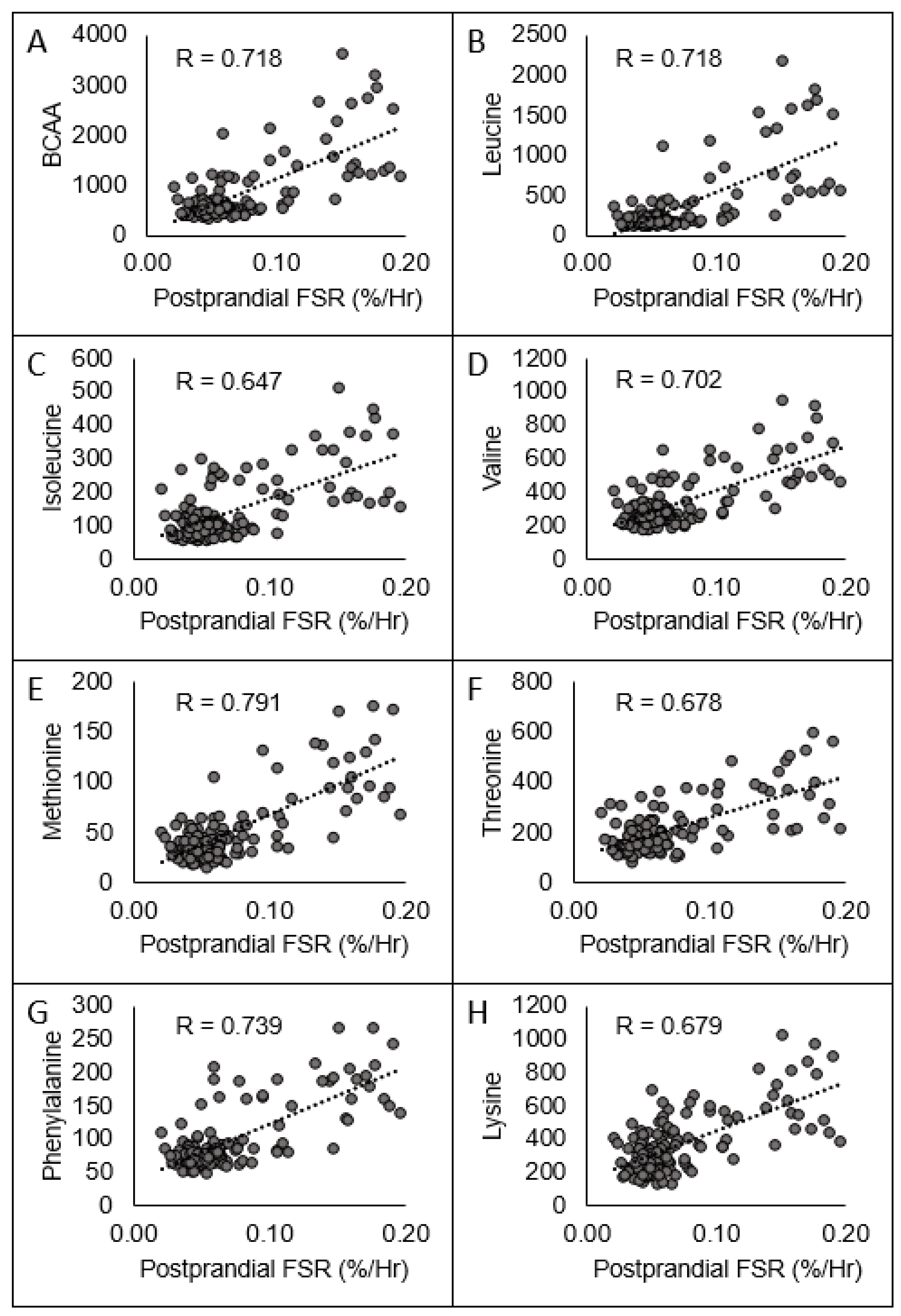