Maternal nutritional and metabolic status influence fetal growth. This study investigated the contribution of gestational weight gain (GWG), gestational diabetes (GDM), and maternal obesity to birthweight and newborn body fat. It is a secondary analysis of a prospective study including 204 women with a pregestational body mass index (BMI) of 18.5–24.9 kg/m2 and 219 women with BMI ≥ 30 kg/m2. GDM was screened in the second and third trimester and was treated by dietary intervention, and insulin if required. Maternal obesity had the greatest effect on skinfolds (+1.4 mm) and cord leptin (+3.5 ng/mL), but no effect on birthweight. GWG was associated with increased birthweight and skinfolds thickness, independently from GDM and maternal obesity. There was an interaction between third trimester weight gain and GDM on birthweight and cord leptin, but not with maternal obesity. On average, +1 kg in third trimester was associated with +13 g in birthweight and with +0.64 ng/mL in cord leptin, and a further 32 g and 0.89 ng/mL increase in diabetic mothers, respectively. Maternal obesity is the main contributor to neonatal body fat. There is an independent association between third trimester weight gain, birthweight, and neonatal body fat, enhanced by GDM despite intensive treatment. View Full-Text
Keywords: neonatal fat mass; leptin; birthweight; obesity; diabetes neonatal fat mass; leptin; birthweight; obesity; diabetes
►▼ Show Figures 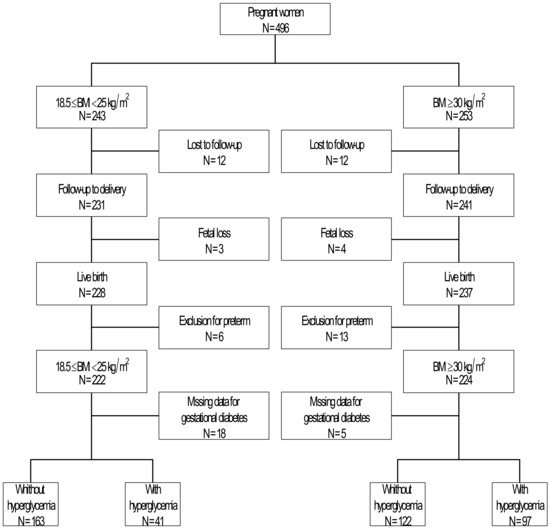