The steady increase in overweight and obese individuals has become a serious health problem worldwide. Currently, it is estimated that nearly one-third of the world’s population is overweight or obese [1]. Obese people are at a high risk for many serious diseases, including diabetes, cardiovascular diseases, nonalcoholic fatty liver disease (NAFLD), osteoarthritis, and cancers [2]. Obesity and related diseases not only damage a person’s health and quality of life but also have become a socioeconomic burden. For the management of such conditions, lifestyle interventions, including a low-calorie diet, physical activity, and behavior therapy, are ideal, but motivation and adherence are not easy [3]. Pharmacological interventions for long-term use include orlistat, lorcaserin, liraglutide, phentermine-topiramate, and naltrexone-bupropion. These drugs are approved for moderately or severely obese patients with a body mass index (BMI) ≥30 or BMI ≥27 with comorbidities and have a high incidence of side effects [4]. Considering the limitations of conventional medication and the complex nature of the pathogenesis of obesity, more safe and effective novel approaches are required.
Natural herbal products with anti-obesity effects have attracted much attention from researchers [5]. In East Asia, many traditional medicinal herbs are edible, and diet therapy using synergistic polyherbal formulations has been well accepted for a long time [6]. Given that the simultaneous modulation of multiple targets is required to manage multifactor diseases such as obesity [7], the use of synergistic polyherbal formulations will act on multiple targets, enhancing their anti-obesity effects. The introduction of a combination of edible herbs from traditional Asian medicine as dietary herbal therapy could be a promising approach for the treatment of obesity and associated disorders.
From these perspectives, we screened the anti-obesity effects of edible medicinal herbs used for weight and fat loss in East Asia. Through multiple screening processes using a high-fat diet (HFD)-induced obesity model, we revealed for the first time, to our knowledge, that the flowers of Prunus persica (L.) Batsch (family Rosaceae) effectively suppress abdominal fat accumulation and hyperglycemia in obese mice by reducing lipogenesis and increasing fatty acid oxidation in the liver [8]. Interestingly, P. persica has been shown more effective in reducing adiposity and associated hyperglycemia when combined with the leaves of Nelumbo nucifera Gaertn. (family Nelumbonaceae) in obese mice [9].
P. persica is cultivated worldwide for its fruit, namely peaches, and its flower has traditionally been utilized as a diuretic, purgative, and cosmetic in China and Korea; moreover, it is currently used as a weight loss tea [8,10,11]. P. persica flowers mainly contain phenolic compounds and flavonoids, and their major components include quercetin derivatives, kaempferol and its derivatives, and chlorogenic acid [12,13,14,15]. Their pharmacological actions are mostly beauty-related, including applications such as anti-obesity [8], skin-whitening [16], and the prevention of ultraviolet-induced photoaging [12,13]. In addition, purgative and prokinetic actions have been reported [10,14]. N. nucifera, commonly called lotus, is an aquatic crop, and its leaves have been widely used in Asia as a tea for weight loss, a food wrapper for cooking, and a traditional medicine for the management of obesity, hyperglycemia, and hyperlipidemia [17,18]. The bioactive constituents of N. nucifera leaves are mainly alkaloids, such as nuciferine and nornuciferine, which are responsible for its various pharmacological activities, including anti-obesity, anti-hyperlipidemia, anti-inflammatory, anti-hyperuricemic, sedative-hypnotic, and anxiolytic effects [17,19,20,21]. Although these two herbs have been used to manage obesity and associated metabolic disorders, the mixture of the two has not been well studied, and its effective dose and possible mechanisms of action remain unknown.
The present study investigated the anti-obesity effects of an herbal extract mixture of P. persica and N. nucifera (designated as HT077) and explored the underlying mechanisms using an HFD-induced obesity model. Male C57BL/6 mice were fed an HFD mixed with 0.1%, 0.2%, or 0.4% HT077 for 12 weeks and their body weight, abdominal fat mass, spleen and liver weights, and serum biochemical profiles were assessed. We also measured hepatic triglyceride and total cholesterol contents and examined the expression levels of genes related to lipogenesis and fatty acid oxidation in adipose tissues.

Three-week-old male C57BL/6 mice were purchased from Orient Bio Inc. (Seongnam-si, Gyeonggi-do, Korea) and acclimatized for 1 week before use. Mice were housed four per cage under controlled laboratory conditions of 23 ± 1 °C, 55% ± 5% humidity, and a 12 h light/dark cycle. After the acclimation period, the mice were randomly divided into six groups as follows: normal diet (ND), HFD control, HFD + orlistat (positive control), and HFD + 0.1, 0.2, or 0.4% HT077 (n = 8 for ND, 16 for HFD, and 12 for the other four groups). The ND group was fed a rodent diet with 10 kcal% fat (cat. no. D12450B; Research Diets Inc., New Brunswick, NJ, USA) for 12 weeks, while the other HFD groups were fed a rodent diet with 60 kcal% fat (cat. no. D12492; Research Diets Inc.) with or without interventions. The positive control group received an HFD mixed with 0.02% orlistat, and the HFD + HT077 groups received an HFD mixed with 0.1, 0.2, or 0.4% HT077 extract. During the experimental period, mice were allowed ad libitum access to diet and distilled water. Mice were checked daily for clinical signs including general appearance, posture, consciousness, behavior, breathing, salivation, vomiting, and so forth, and body weight and food intake were measured twice per week. At the end of 12 weeks, the mice were fasted overnight and sacrificed under isoflurane anesthesia. Blood was collected from the inferior vena cava, and epididymal, perirenal, and mesenteric adipose tissues, liver, and spleen were dissected and weighed. The adipose tissues were identified and isolated according to Bagchi and MacDougald [23] for accurate and reproducible measurement. The relative organ weights were calculated on the basis of the fasted body weight. The blood samples were let stand for 30 min at room temperature and centrifuged at 3000 rpm at 4 °C for 10 min to separate the serum. The adipose tissues, liver, and serum were stored at −80 °C before analysis. All experimental protocols were approved by the International Animal Care and Use Committee of the Korea Institute of Science and Technology for Eastern Medicine (approval no. KISTEM-IACUC-2019-004).

Lipids were extracted according to the method of Folch et al. [24] with slight modifications. Briefly, liver tissue (100 mg) was homogenized in 800 µL of methanol–chloroform solution (1:2, v/v) and 200 µL of distilled water. The hepatic mixture was vortexed and centrifuged at 12,000 rpm for 10 min. The lower phase of the mixture was separated and dried using nitrogen gas. The concentrations of triglyceride and total cholesterol in the liver were analyzed using commercial kits (catalog no. AM157S and AM202, respectively; Asan Pharmaceutical, Seoul, Korea).

3.1. Effects of HT077 on Body Weight and Food Consumption

3.3. Effects of HT077 on Serum Levels of Glucose, Lipids, and Liver Enzymes

Twelve weeks of HFD feeding significantly increased triglyceride levels in the liver (p < 0.05, Figure 5a) but did not change total cholesterol levels (Figure 5b). Hepatic triglyceride levels were significantly reduced by supplementation with 0.4% HT077 (p < 0.05) but not 0.02% orlistat. Hepatic total cholesterol levels were significantly decreased by supplementation with 0.4% HT077 and 0.02% orlistat (both p < 0.01).

Our results suggest that HT077 has anti-obesity effects and inhibits the development of obesity-related metabolic disorders such as fatty liver, hyperglycemia, and hyperlipidemia. These effects might be partially mediated by an improvement in blood leptin and adiponectin concentrations and the regulation of lipid synthesis and fatty acid oxidation in adipose tissue. Our results support the potential health benefits of HT077 in managing obesity and related metabolic diseases.

This work was supported by the Bio-Synergy Research Project (NRF-2012M3A9C4048795) of the Ministry of Science, ICT and Future Planning through the National Research Foundation. 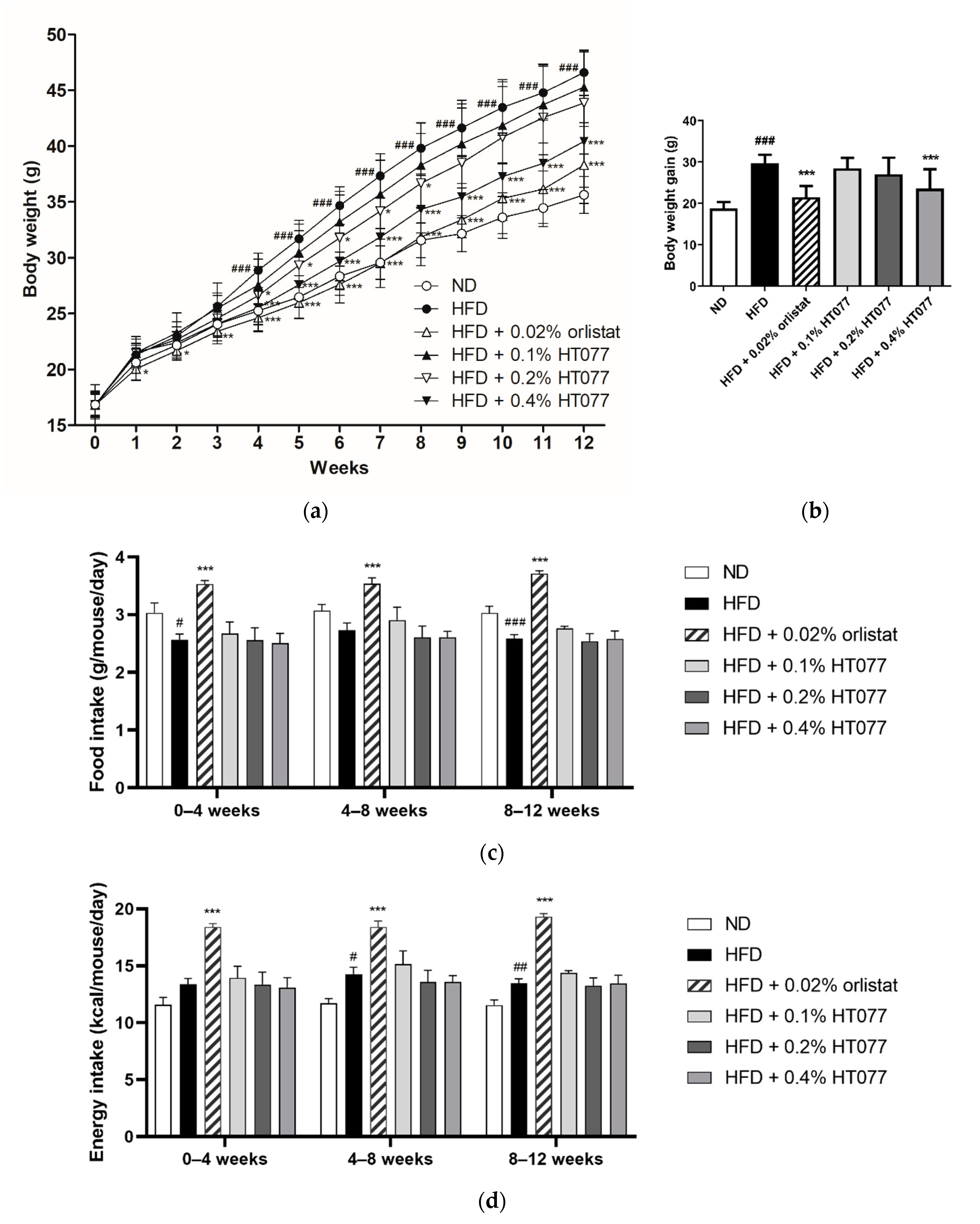 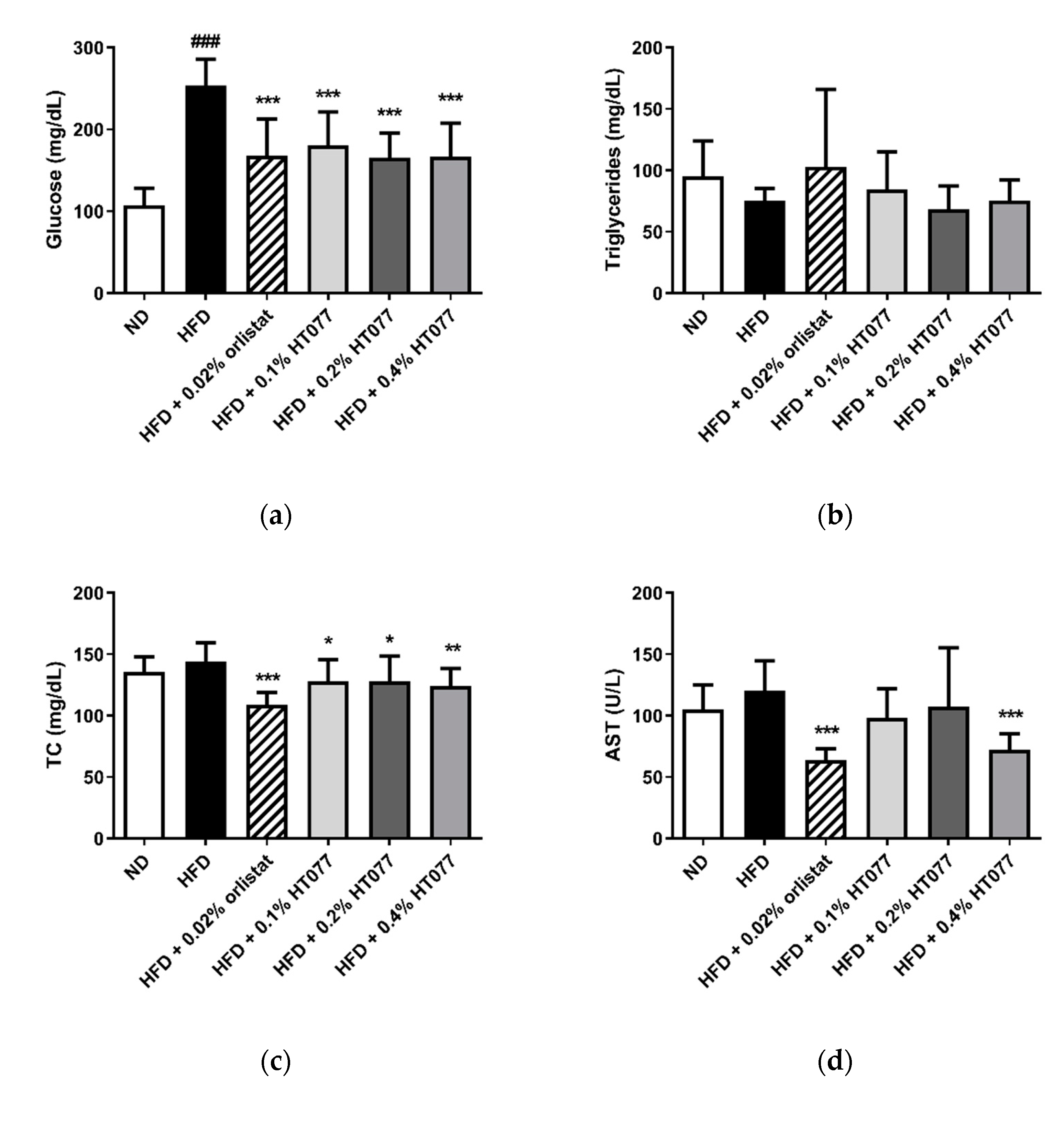 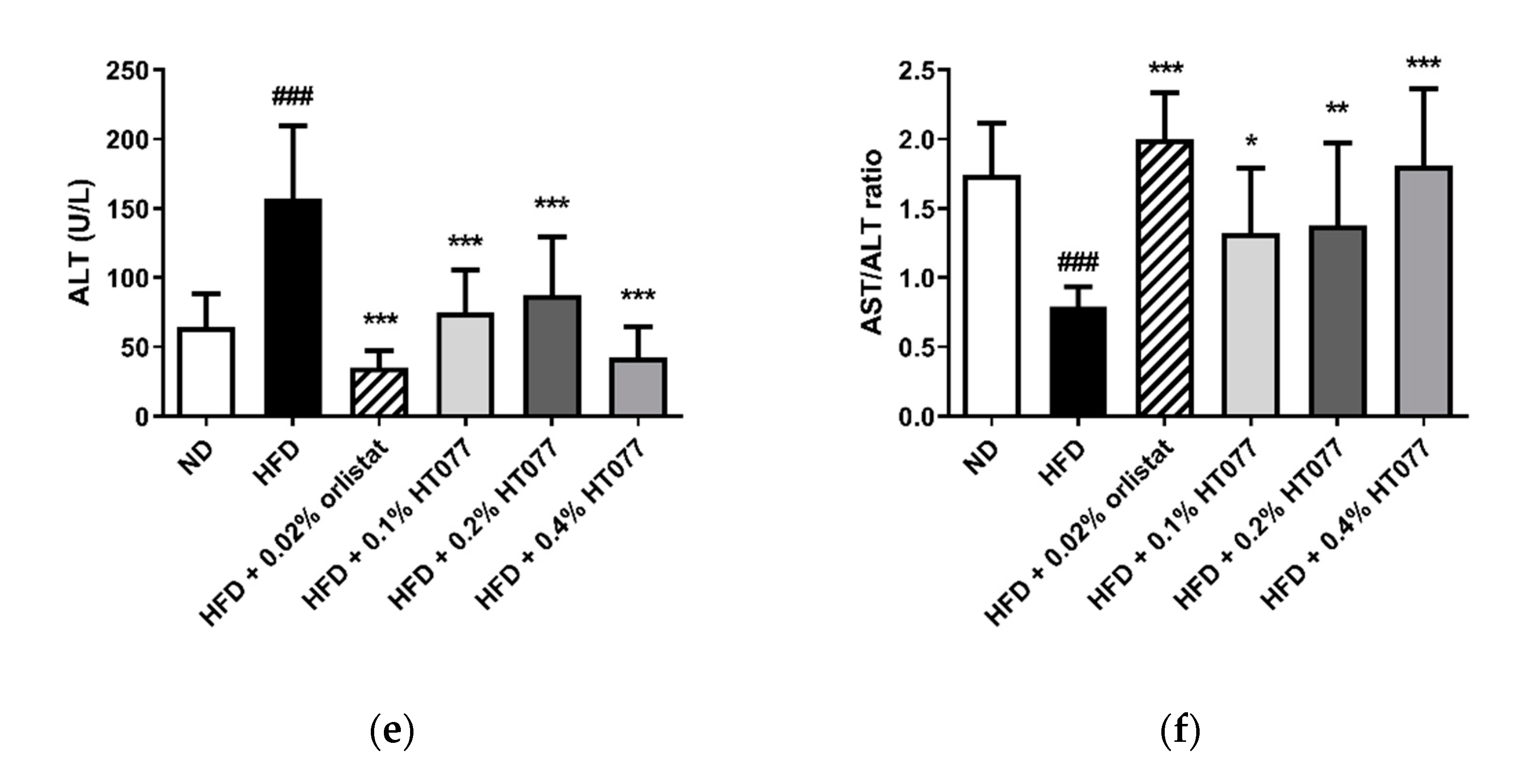 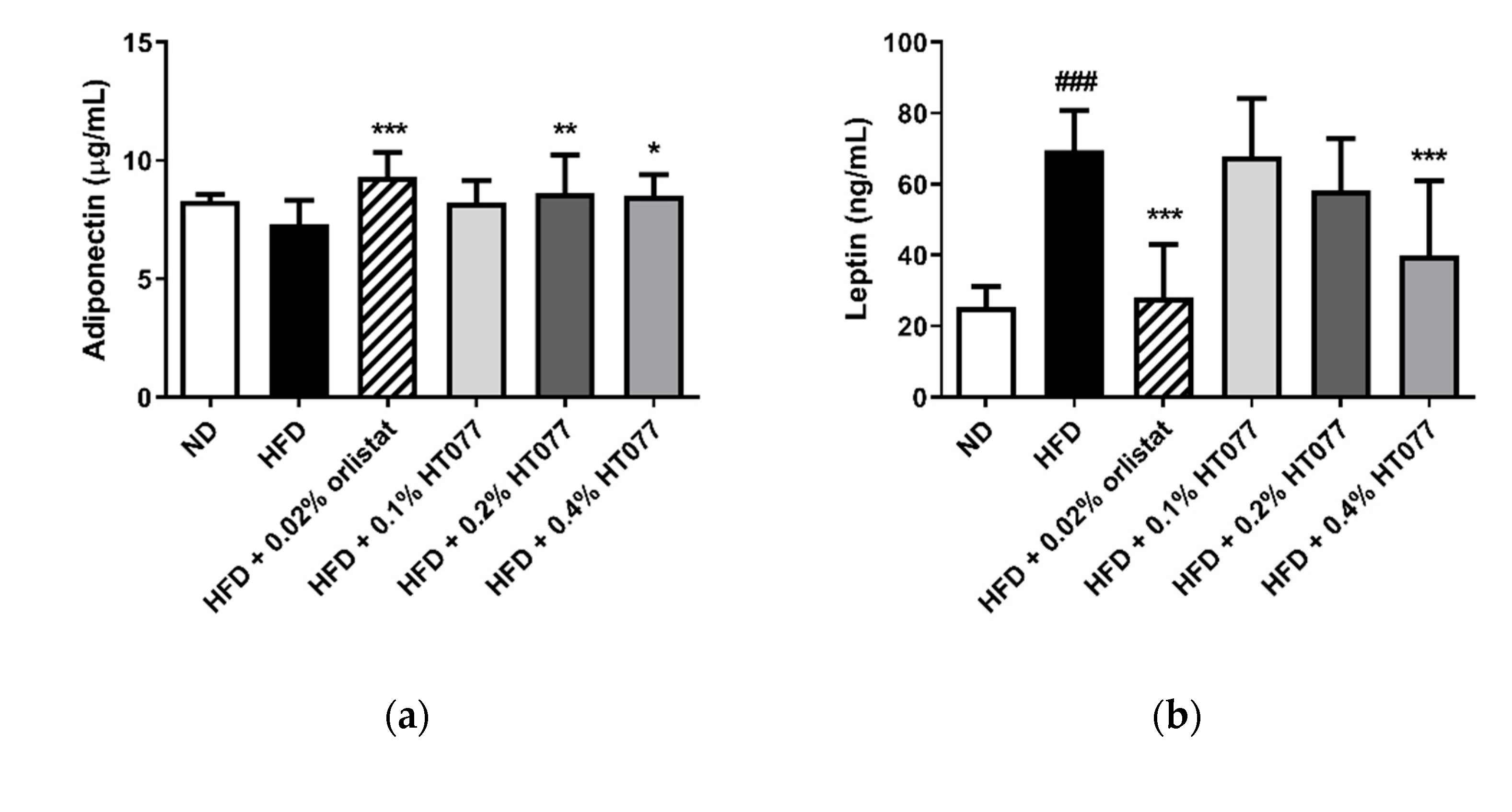 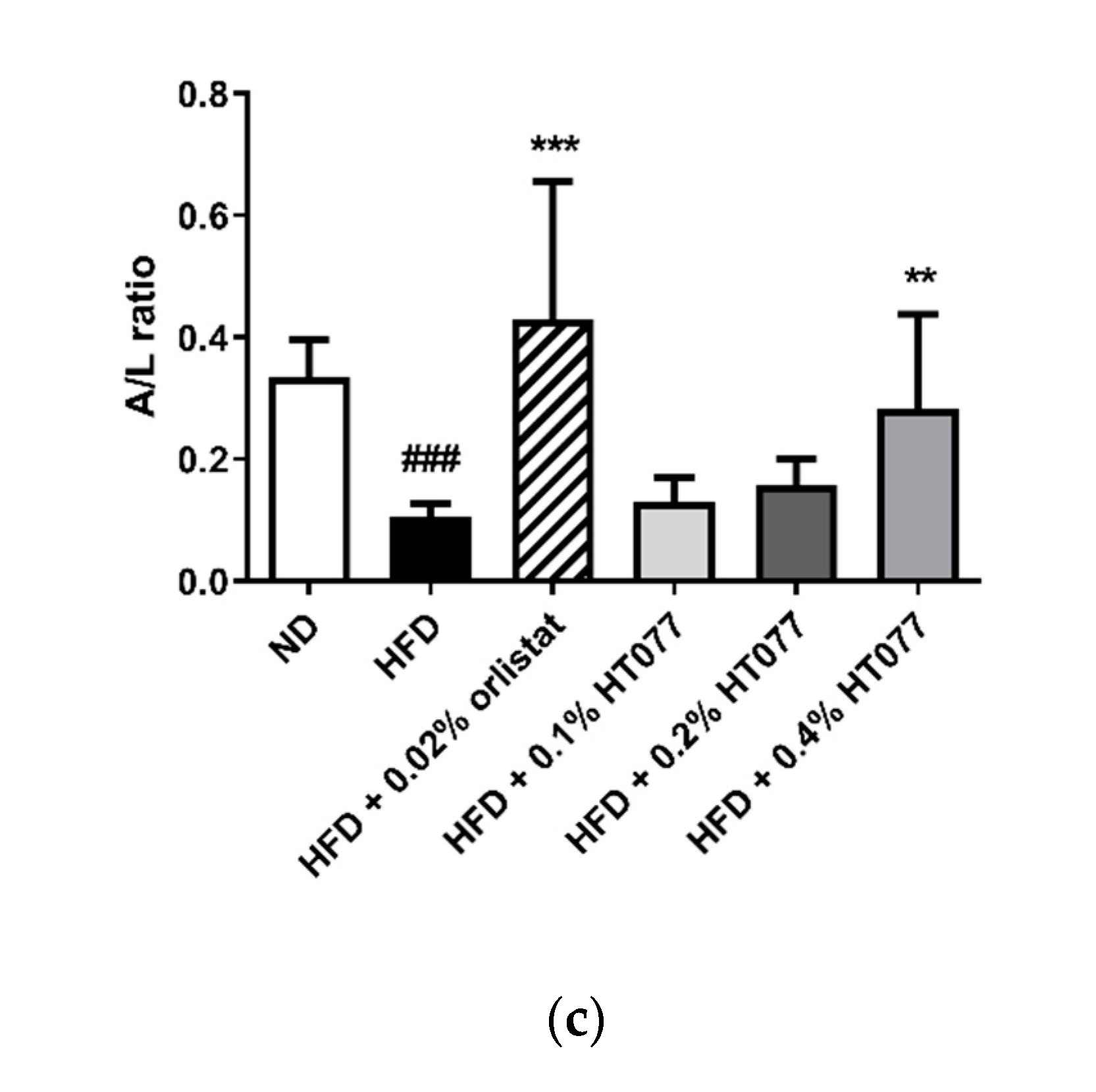 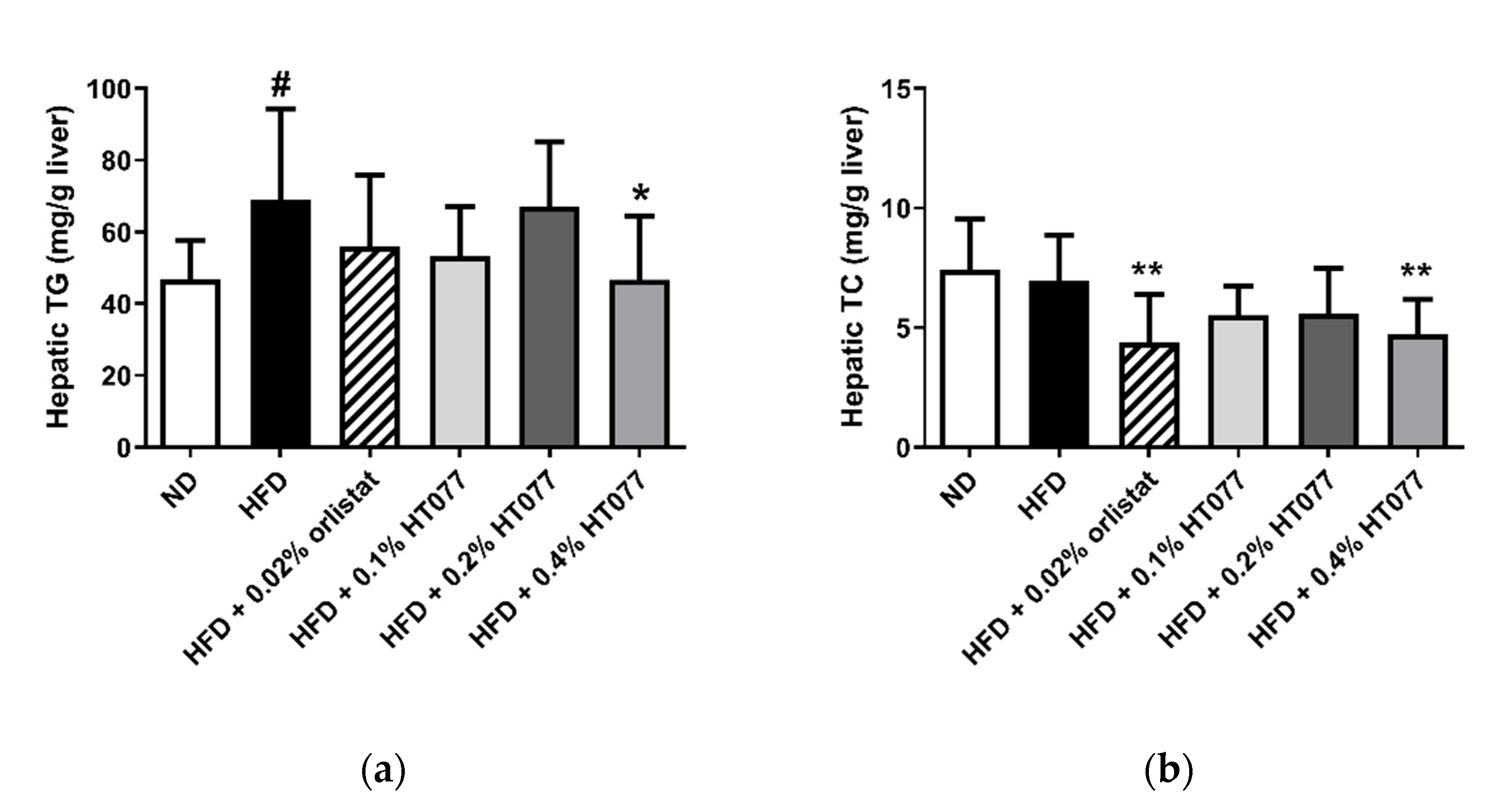 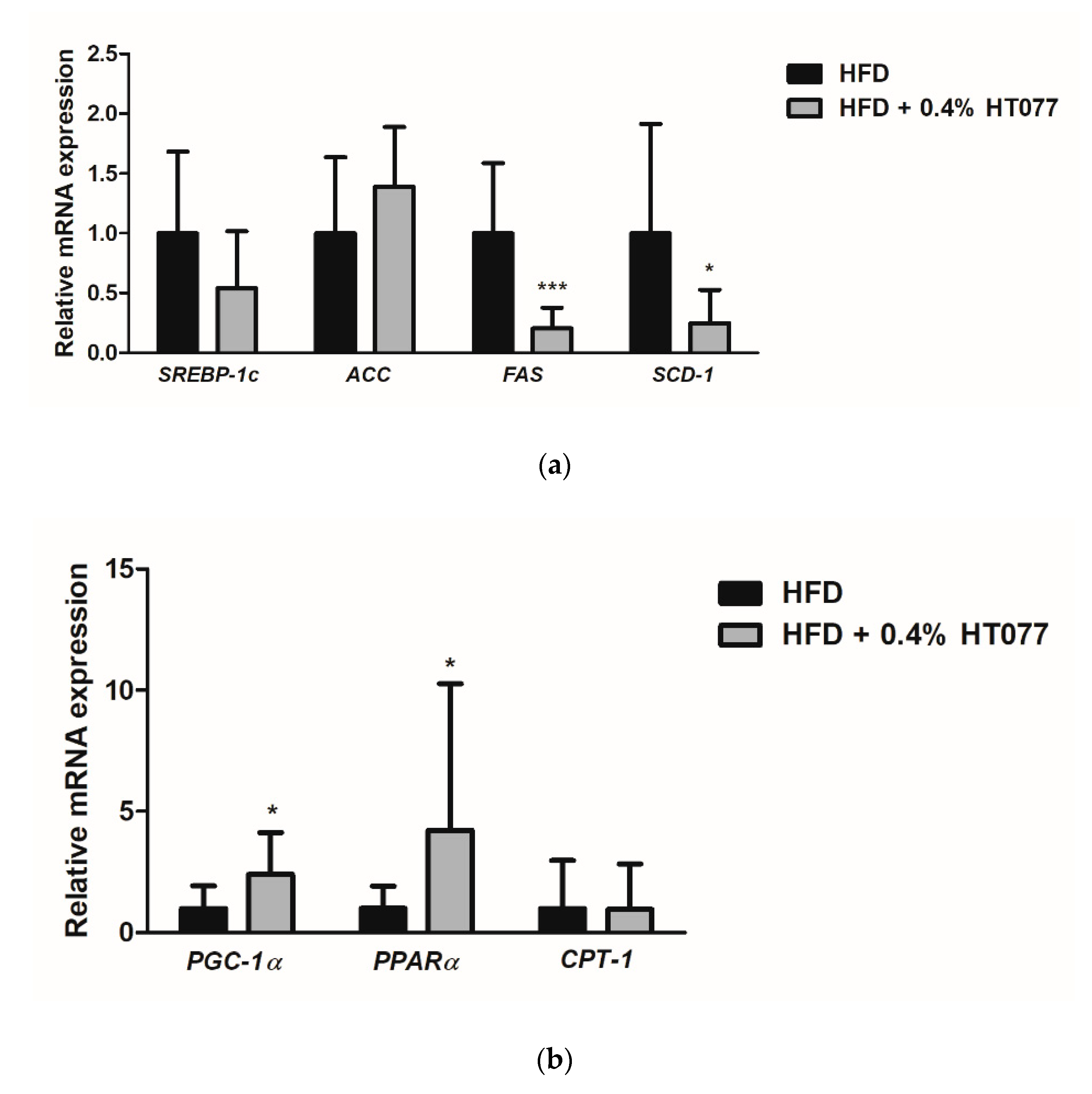