Diet to Reduce the Metabolic Syndrome Associated with Menopause. The Logic for Olive Oil
Previous Article in Journal

Application of Citicoline in Neurological Disorders: A Systematic Review

Tryptophan Intake and Metabolism in Older Adults with Mood Disorders

The role of serotonin in the pathogenesis of depression is well-documented, while the involvement of other tryptophan (TRP) metabolites generated in the kynurenine pathway is less known. The aim of this study was to assess the intake and metabolism of TRP in elderly patients with mood disorders. Ninety subjects in three groups, 30 subjects each, were enrolled in this study: controls (healthy young adults, group I) and elderly individuals without (group II) or with (group III) symptoms of mild and moderate depression, as assessed by the Hamilton Depression Rating Scale (HAM-D) and further referred to as mood disorders. The average TRP intake was evaluated with the nutrition calculator. Urinary levels of TRP, 5-hydroxyindoleacetic acid (5-HIAA), L-kynurenine (KYN), kynurenic acid (KynA), xanthurenic acid (XA), and quinolinic acid (QA) were determined by liquid chromatography with tandem mass spectrometry and related to creatinine level. The average daily intake of TRP was significantly lower in group III than the remaining two groups, but group III was also characterized by higher urinary levels of KYN, KynA, XA, and QA as compared with younger adult individuals and elderly patients without mood disorders. Therefore, mild and moderate depression in the elderly may be associated with a lower intake of TRP and changes in its kynurenine metabolic pathway, which suggests a potential dietary TRP-based intervention in this group of patients. View Full-Text
Keywords: tryptophan; diet in the elderly; depression; mood disorders; serotonin and kynurenine pathways of tryptophan metabolism tryptophan; diet in the elderly; depression; mood disorders; serotonin and kynurenine pathways of tryptophan metabolism
►▼ Show Figures 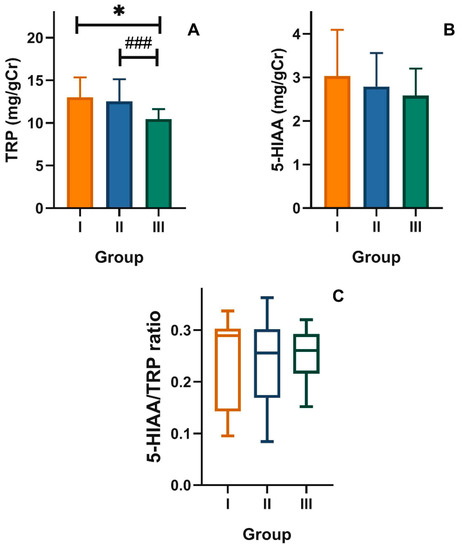