There is an evidence–practice gap between the dietary recommendations for age-related macular degeneration (AMD) presented in the literature and those practiced by patients. This study reports on the 3-month post-intervention results of a randomised controlled trial (RCT) evaluating telephone-delivered counselling to improve dietary behaviours among AMD patients. A total of 155 AMD patients (57% female, aged 78 ± 8 years; control: 78, intervention: 77), primarily residing in New South Wales, Australia, were recruited. Participants completed a baseline questionnaire and a short dietary questionnaire (SDQ-AMD). The intervention included an evidence-based nutrition resource and four monthly calls with a dietitian. Immediately post-intervention, intervention participants repeated the SDQ-AMD and completed a feedback form. At 3 months post-intervention, both study arms repeated the SDQ-AMD. Statistical analyses included t-tests and McNemar’s test. Intervention participants reported satisfaction with the tailored phone calls, nutrition resource and nutrition education provided. At 3 months post-intervention, there was no statistically significant difference between study arms in the proportion of participants meeting the dietary goals nor in intake (mean servings ± SE) of total vegetables (primary outcome) and other key food groups; however, there was a significantly higher intake of nuts (secondary outcome) (3.96 ± 0.51 vs. 2.71 ± 0.32; p = 0.04) among participants in the intervention versus control group. Within the intervention arm, there were also significant improvements in intakes of the following secondary outcomes: dark green leafy vegetables (0.99 ± 0.17 vs. 1.71 ± 0.22; p = 0.003) and legumes (0.69 ± 0.10 vs. 1.12 ± 0.16; p = 0.02) and intake of sweets and processed/prepared foods (8.31 ± 0.76 vs. 6.54 ± 0.58, p = 0.01). In summary, although there were few dietary differences between study arms at 3 months post-intervention, the intervention involving four monthly calls was acceptable and helpful to the participants. This type of intervention therefore has the potential to provide people with AMD the needed support for improving their nutrition knowledge and dietary practices, especially if continued over a longer period. View Full-Text
Keywords: age-related macular degeneration; education; nutrition; telehealth age-related macular degeneration; education; nutrition; telehealth
►▼ Show Figures 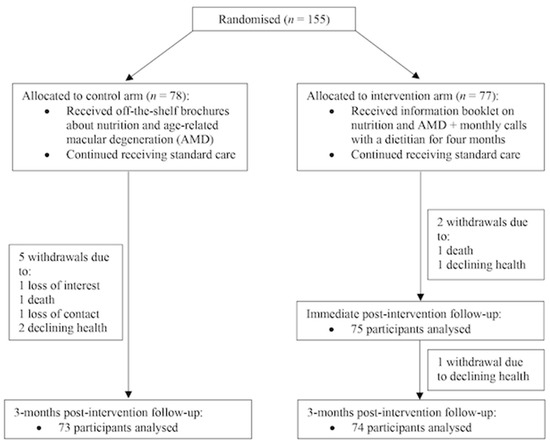