Sepsis is characterized by a dysregulated immune response to infection. Nutrition is important in the care of septic patients, but the effects of specific nutrients on inflammation in sepsis are not well defined. Our prior work has shown benefits from early enteral dextrose infusion in a preclinical endotoxemia model of sepsis. In the current study, we extend our initial work to examine the effects of dextrose infusions, varying by route of administration, on inflammation and glycemic control in a more clinically relevant and translational model of Klebsiella pneumoniae (KP) bacteremia. Ten-week old C57BL6/J male mice (n = 31) underwent the implantation of indwelling vascular catheters, followed by inoculation with oropharyngeal KP. The mice were randomized 24 h after inoculation to (1) intravenous (IV) dextrose, (2) enteral dextrose, or (3) enteral saline (control) to study the effects on systemic inflammation, hemodynamics, and glycemic control. At 72 h, 77% of the control mice died, whereas IV dextrose induced 100% mortality, associated with increased inflammation, hyperglycemia, and hypotension. Enteral dextrose reduced mortality to 27%, promoted euglycemia, and reduced inflammation compared to IV dextrose. We conclude, in a bacteremic model of sepsis, that enteral (but not IV) dextrose administration is protective, suggesting that the route of nutrient support influences inflammation in sepsis. View Full-Text
Keywords: carbohydrate; inflammation; sepsis; pneumonia; hyperglycemia carbohydrate; inflammation; sepsis; pneumonia; hyperglycemia
►▼ Show Figures 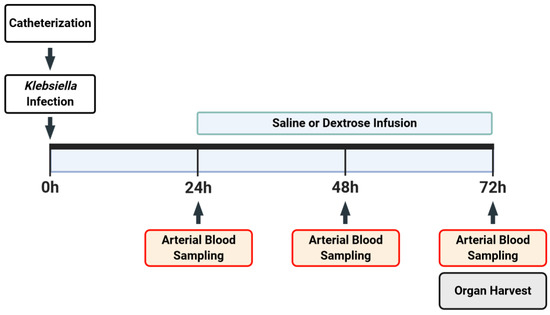