Small-Scale Livestock Production in Nepal Is Directly Associated with Children’s Increased Intakes of Eggs and Dairy, But Not Meat
Next Article in Special Issue

Maternal Lutein and Zeaxanthin Concentrations in Relation to Offspring Visual Acuity at 3 Years of Age: The GUSTO Study
Previous Article in Journal

Unhealthy dietary habits are major modifiable risk factors for the development of type 2 diabetes mellitus, a metabolic disease with increasing prevalence and serious consequences. Microvascular complications of diabetes, namely diabetic peripheral neuropathy (DPN), retinopathy (DR), and nephropathy (DN), are associated with high morbidity rates and a heavy social and economic burden. Currently, available therapeutic options to counter the evolution of diabetic microvascular complications are clearly insufficient, which strongly recommends further research. Animal models are essential tools to dissect the molecular mechanisms underlying disease progression, to unravel new therapeutic targets, as well as to evaluate the efficacy of new drugs and/or novel therapeutic approaches. However, choosing the best animal model is challenging due to the large number of factors that need to be considered. This is particularly relevant for models induced by dietary modifications, which vary markedly in terms of macronutrient composition. In this article, we revisit the rodent models of diet-induced DPN, DR, and DN, critically comparing the main features of these microvascular complications in humans and the criteria for their diagnosis with the parameters that have been used in preclinical research using rodent models, considering the possible need for factors which can accelerate or aggravate these conditions.
Keywords: type 2 diabetes mellitus; microvascular complications; diabetic peripheral neuropathy; diabetic retinopathy; diabetic nephropathy; rodent models; diet-induced type 2 diabetes mellitus; microvascular complications; diabetic peripheral neuropathy; diabetic retinopathy; diabetic nephropathy; rodent models; diet-induced

Diabetes mellitus is considered one of the primary contributors to non-communicable diseases. Estimates from the International Diabetes Federation (IDF) suggest that the number of persons afflicted by this disease will rise from 463 million in the year of 2019 to 700 million by 2045 [1]. Type 2 diabetes mellitus (T2DM) accounts for roughly 90% of all individuals with diabetes and the expected increased prevalence directly affects neuropathy, retinopathy, and nephropathy burden, collectively alluded as the classical diabetic microvascular complications [2].
T2DM onset and early progression is a silent process; however, at the time of diagnosis, microcirculatory damage is often present with multiorgan consequences [3,4]. The evolution of diabetic microvascular complications is closely linked with longstanding or uncontrolled disease and may ultimately culminate in severe disabilities, such as diabetic foot ulcers, blindness, and end stage renal disease (ESRD), with increased costs for patients and society [5]. Unfortunately, contemporary glucose-lowering medications have been disappointing to halt or slow down diabetic microvascular injury [6]. Thus, updated preclinical approaches are needed to gain new insights on the basic function of diabetic microvasculature and successfully improve unmet therapies [7].
Animal models have been acknowledged for several decades as useful tools to study metabolic disorders. To obviate the gap between preclinical and clinical research, experimental models aimed to replicate diabetic microvasculature dysfunction should ideally emulate T2DM main stressors and mimic the orchestrated mechanisms underlying human diabetes progression [8,9]. It is generally believed that T2DM is driven by a complex interplay of genetic factors and unhealthy lifestyle habits comprising an energy-dense “westernized” diet [10,11,12,13,14]. Hence, diet-induced rodent models of T2DM, whether alone or combined with genetic/chemical stressors, are paramount to more closely replicate human microvascular complications [15,16]. The most commonly used diets for T2DM animal research are high-fat diets (HFD), high-sugar diets (HSD), and Western diets combining both high-fat and high-sugar components (HFSD) [17]. Western diets have been a usual choice due to their ability to replicate human unhealthy dietary patterns along with a more robust and reproducible animal phenotype. Yet, the lack of standardization of content/source of macronutrients as well as protocol duration currently challenges experimental data reproducibility and a fair translation of preclinical data [17].
Herein, we intended to revisit diet-induced rodent models, whether alone or combined with genetic or chemical tools, to successfully replicate the main clinical features underlying classical diabetic microvascular complications.

The growing incidence of patients presenting diabetic microvascular complications is in line with the alarming increasing prevalence of T2DM in many world regions. Diabetic neuropathy, retinopathy, and nephropathy are strongly associated with increased morbidity and reduced life quality of patients and of their families, also contributing to a reduced availability to work, altogether imposing tremendous socioeconomic and medical costs.
Despite major efforts to develop more efficient strategies to prevent or at least to halt progression of diabetic microvascular complication [102], the available options are clearly limited and the battle is still lost. The conclusion has two facets: (i) we were still unable to discover the main mechanisms involved, the most promising targets, and/or the most effective therapeutic tools, although we are using the right models, techniques, and approaches regarding the current scientific knowledge, or (ii) we are not even using the most appropriate weapons, so success can only happen by chance. Perhaps both conclusions can coexist, and we need to move forward in both ways and converge in the right direction. The complexity of each of these diseases/complications (including the high number of risk factors involved and the multiple coexisting pathophysiological mechanisms), the nebulous definition of precise diagnostic criteria (namely for humans), as well as the difficulty of make use of human samples, greatly complicates this mission.
In light of this, animal models can be a valid instrument, particularly if they can reproduce the main features of those diseases, replicate their evolution, and if they are being used with criterion and standardization by different institutions and researchers. In order to promote the standardization needed, groups and/or organizations have proposed unifying frameworks to phenotyping rodent models of diabetic microvascular complications, namely for neuropathy [29] and nephropathy [75], taking into consideration the human diagnosis criteria, as summarized in Figure 1. In spite of that, over the past few years, as the use of animal models has become widespread, there is some disappointment with the difficulty of choosing a good model and of being able to replicate the results of other laboratories, even using similar experimental settings.
Distinct animal models could be developed with diverse induction tools, including genetic, chemical, and dietary manipulation. Although there are no perfect models, the use of hypercaloric diets as a way to induce the disease is a relevant strategy since this is one of the main risk factors for the onset and evolution of diabetes and its complications; in addition, it is associated with a slow evolution, mimicking the human disease and allowing to test the effectiveness of preventive or curative strategies. However, there are several aspects to consider when using a diet-induced model. First of all, it is particularly difficult and time-consuming to get overt diabetes only with hypercaloric diets, especially in rats, and it is often necessary to promote aggravation with other approaches, namely the combination of high-fat and high-sugar diets and promotion of pancreatic injury using a toxic chemical agent, the most popular being STZ. For the development of more consolidated stages of neuropathy, retinopathy, and nephropathy, this is a fundamental approach, as clearly described in this article [8,41,83].
In addition, a number of other factors that may interfere with the model must be taken into account, including diet, animal species and strain, gender, and age. As discussed throughout the article, there are a variety of diets (with different components and percentages) that promote distinct degrees of dysfunction and lesion, due to distinct impact on the metabolic pathways underlying disease appearance and evolution, as it is recognized that diabetic complications are affected by various factors, including obesity, IR, hyperglycemia, and hyperlipidemia. Additionally, it is known that there are large variations in sensitivity/resistance to hypercaloric diets between different species (a paramount example is the C57BL/6 mice versus the Wistar rat when fed with HFD [80,81]) and even for different strains of the same species [79,91,103], namely, regarding sensitivity to the development of distinct complications, as reported for retinopathy and nephropathy in the ZSF1 rat under HFD [67,85]. Age is also a bias factor, as diabetic microvascular complications may have a distinct phenotype depending on the animals’ age. The same is also true for gender, and it is now clearly accepted that studies of metabolic diseases, among others, should be carried out on individuals of both genders.
In conclusion, diet-induced rodent models exhibit the main features of human DPN, DR, and DN, as well as different disease stages, namely when done using combined diets and in the presence of a low-dose STZ. These models may be crucial for studying the pathophysiology of these complications, as well as to identify new targets and test therapeutic approaches. However, if we are to effectively evolve knowledge and be able to intervene in the evolution of disease, we must be highly judicious when choosing the experimental animal design.

All the authors have substantially contributed to the article, with particular emphasize to text writing by I.P., A.A., R.F., S.D.V. and F.R. and to figure elaboration by A.A., S.N. and P.G. The final version was achieved with substantial revision and editing by all the authors: I.P., A.A., S.N., P.G., R.F., S.D.V. and F.R. F.R. has supervised and funding acquisition responsibilities. All authors have read and agreed to the published version of the manuscript. 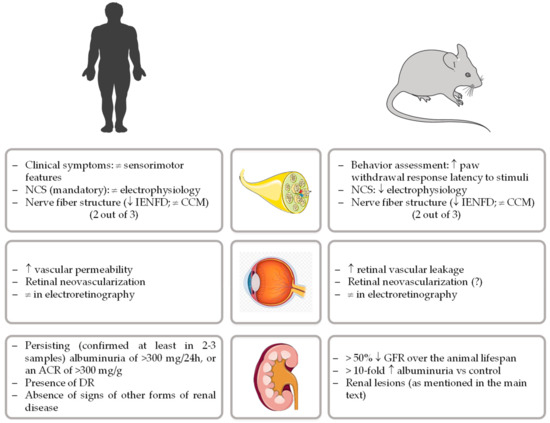