Effects of Sucralose Ingestion versus Sucralose Taste on Metabolic Responses to an Oral Glucose Tolerance Test in Participants with Normal Weight and Obesity: A Randomized Crossover Trial
Next Article in Special Issue

Trading on Food Quality due to Changes in Prices: Are There Any Nutritional Effects?

Taste perception, although vital for nutrient sensing, has long been overlooked in sensory assessments. This can, at least in part, be attributed to challenges associated with the handling of liquid, perishable stimuli, but also with scarce efforts to optimize testing procedures to be more time-efficient. We have previously introduced an adaptive, QUEST-based procedure to measure taste sensitivity thresholds that was quicker than other existing approaches, yet similarly reliable. Despite its advantages, the QUEST procedure lacks experimental control of false alarms (i.e., response bias) and psychometric function slope. Variations of these parameters, however, may also influence the threshold estimate. This raises the question as to whether a procedure that simultaneously assesses threshold, false-alarm rate, and slope might be able to produce threshold estimates with higher repeatability, i.e., smaller variation between repeated measurements. Here, we compared the performance of QUEST with a method that allows measurement of false-alarm rates and slopes, quick Yes–No (qYN), in a test–retest design for citric acid, sodium chloride, quinine hydrochloride, and sucrose recognition thresholds. We used complementary measures of repeatability, namely test–retest correlations and coefficients of repeatability. Both threshold procedures yielded largely overlapping thresholds with good repeatability between measurements. Together the data suggest that participants used a conservative response criterion. Furthermore, we explored the link between taste sensitivity and taste liking or which we found, however, no clear association. View Full-Text
Keywords: sensitivity; taste; threshold; staircase; QUEST; bias; quick Yes–No (qYN) sensitivity; taste; threshold; staircase; QUEST; bias; quick Yes–No (qYN)
►▼ Show Figures 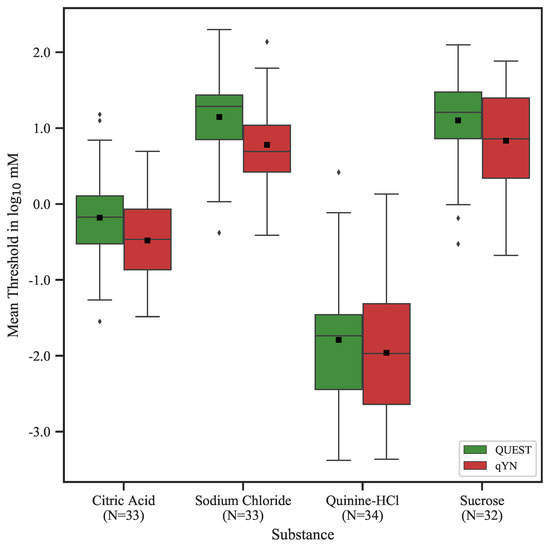