Impact of a Three-Week in-Hospital Multidisciplinary Body Weight Reduction Program on Body Composition, Muscle Performance and Fatigue in a Pediatric Obese Population with or without Metabolic Syndrome
Previous Article in Journal

Low diet quality is a driver of general and micronutrient malnutrition in urban and rural areas. The objective was to compare malnutrition and micronutrient deficiencies linked to dietary intake among urban and rural schoolchildren from food insecure settings in Kenya. The cross-sectional study was conducted among urban and rural schoolchildren aged 7–9 years. Height and weight were measured, venous blood samples were assessed and data on dietary intake was collected. After screening out children with hemoglobin >12.2 g/dL and moderate or severe undernutrition, a total of 36 urban and 35 rural children participated. The prevalence of moderate underweight, wasting, and stunting were lower in urban than in rural children, with significant differences in median z-scores for underweight (p < 0.001) and wasting (p < 0.001). Significantly higher values for serum ferritin (p = 0.012) and zinc (p < 0.001) were found in urban children. Yet, the median adequacy ratios were higher for vitamin C (p = 0.045), iron (p = 0.003), and zinc (p = 0.003) in rural than in urban children. General nutritional, iron, and zinc status were significantly better in slightly anemic urban children than in rural ones. Improving the nutrition of schoolchildren in urban and rural settings requires different dietary approaches. View Full-Text
Keywords: nutritional status; micronutrients; dietary intake; urban; rural; schoolchildren nutritional status; micronutrients; dietary intake; urban; rural; schoolchildren
►▼ Show Figures 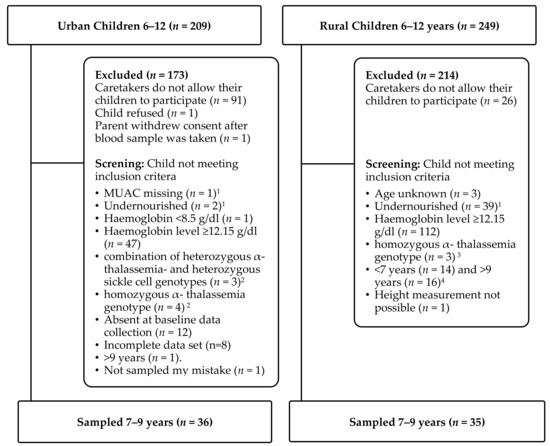 Evang, E.C.; Habte, T.-Y.; Owino, W.O.; Krawinkel, M.B. The Nutritional and Micronutrient Status of Urban Schoolchildren with Moderate Anemia is Better than in a Rural Area in Kenya. Nutrients 2020, 12, 207.


Evang EC, Habte T-Y, Owino WO, Krawinkel MB. The Nutritional and Micronutrient Status of Urban Schoolchildren with Moderate Anemia is Better than in a Rural Area in Kenya. Nutrients. 2020; 12(1):207.


Evang, Esther C.; Habte, Tsige-Yohannes; Owino, Willis O.; Krawinkel, Michael B. 2020. "The Nutritional and Micronutrient Status of Urban Schoolchildren with Moderate Anemia is Better than in a Rural Area in Kenya." Nutrients 12, no. 1: 207.