Perceptions of ‘Home Cooking’: A Qualitative Analysis from the United Kingdom and United States
Previous Article in Special Issue

Gut Microbial, Inflammatory and Metabolic Signatures in Older People with Physical Frailty and Sarcopenia: Results from the BIOSPHERE Study

Article
Identification of a Circulating Amino Acid Signature in Frail Older Persons with Type 2 Diabetes Mellitus: Results from the Metabofrail Study
by

:
Diabetes and frailty are highly prevalent conditions that impact the health status of older adults. Perturbations in protein/amino acid metabolism are associated with both functional impairment and type 2 diabetes mellitus (T2DM). In the present study, we compared the concentrations of a panel of circulating 37 amino acids and derivatives between frail/pre-frail older adults with T2DM and robust non-diabetic controls. Sixty-six functionally impaired older persons aged 70+ with T2DM and 30 age and sex-matched controls were included in the analysis. We applied a partial least squares-discriminant analysis (PLS-DA)-based analytical strategy to characterize the metabotype of study participants. The optimal complexity of the PLS-DA model was found to be two latent variables. The proportion of correct classification was 94.1 ± 1.9% for frail/pre-frail persons with T2DM and 100% for control participants. Functionally impaired older persons with T2DM showed higher levels of 3-methyl histidine, alanine, arginine, glutamic acid, ethanolamine sarcosine, and tryptophan. Control participants had higher levels of ornithine and taurine. These findings indicate that a specific profile of amino acids and derivatives characterizes pre-frail/frail older persons with T2DM. The dissection of these pathways may provide novel insights into the metabolic perturbations involved in the disabling cascade in older persons with T2DM.
Keywords:
aging; metabolomics; systems biology; personalized medicine; metabolism; frailty; sarcopenia; muscle wasting; precision medicine; metabolic profiling

Type 2 diabetes mellitus (T2DM) is a chronic condition frequently occurring in old age [1,2]. T2DM is associated with higher risk of negative outcomes, including disability and mortality [3]. T2DM-related complications are especially prevalent in older adults and account for the increasing costs of T2DM [4]. Frailty defines a geriatric syndrome characterized by reduced ability to cope with life stressors and increased risk of adverse events (e.g., falls, delirium, loss of independence, mortality) [5,6]. T2DM and frailty are intimately related and share common features, including complex pathophysiology and heterogeneous phenotypes [7], that challenge their management [5,8].
Muscle failure, both in its metabolic and functional manifestations, is a hallmark of T2DM and frailty [7,9]. The progressive and generalized loss of muscle mass, strength, and function with age, termed sarcopenia, fuels a self-reinforcing cycle in which structural, metabolic, and endocrine perturbations in muscle exacerbate T2DM-related signs and symptoms [10]. T2DM further promotes the decline in muscle mass and function [11,12] which, in turn, aggravates functional impairment [13].
The central role of muscle wasting in frailty and T2DM may guide the identification of novel biomarkers and possibly new treatment targets for the two conditions [14,15,16]. In this context, circulating amino acids are promising candidates given their sensor-transducer-effector role in systemic metabolism, muscle homeostasis, and physical function [17,18,19,20]. Moreover, amino acids are involved in processes critical to the development and progression of frailty and T2DM, such as inflammation, glucose homeostasis, and redox regulation [21,22,23].
Targeted metabolomics allowed identifying specific amino acid profiles that were associated with insulin resistance and risk of developing T2DM in independent cohorts across US, Europe, and China [24,25,26,27]. A plasma amino acid signature, together with specific circulating lipid species, was linked to glucose dyshomeostasis and impaired insulin sensitivity in older adults from the Baltimore Longitudinal Study of Aging (BLSA) [28]. In addition, distinct patterns of circulating amino acids were associated with frailty and/or muscle-related parameters (mass, turnover, performance) in older individuals at risk for frailty [29,30,31,32]. Finally, within the “BIOmarkers associated with Sarcopenia and PHysical frailty in EldeRly pErsons” (BIOSPHERE) study, a combination of serum amino acids and derivatives was identified that characterized the metabotype of older adults with physical frailty and sarcopenia (PF&S) [17].
Here, we sought to define the circulating amino acid profile of frail/pre-frail older adults with T2DM (F-T2DM). Our approach, described in the context of the “Metabolic biomarkers of frailty in older people with type 2 diabetes mellitus” (MetaboFrail) study, coupled targeted metabolomics with a chemometric modeling strategy [16]. Through this innovative biomarker discovery strategy, we identified a specific profile of serum amino acids in F-T2DM older people. These findings may offer new insights into the metabolic perturbations associated with the disabling cascade in older persons with T2DM.

MetaboFrail was developed as an ancillary study of the “Multi-modal Intervention in Diabetes in Frailty” (MID-Frail) project [16,33,34]. The latter was a cluster-randomized multicenter clinical trial that evaluated the effectiveness of a multicomponent intervention (mainly based on resistance exercise and lifestyle counseling) on improving physical performance compared with usual care in F-T2DM older adults from seven European countries (ClinicalTrials.gov identifier: NCT01654341) [16,33]. For the present study, a subgroup of MID-Frail participants recruited in Spanish and French study centers were enrolled. The main eligibility criteria were: (a) age at screening 70 years or older; (b) T2DM diagnosis from at least two years; and (c) being pre-frail or frail according to Fried’s criteria [35]. The main exclusion criteria were: (a) poor cognition operationalized as a Mini Mental State Examination score <20 [36]; (b) severe disability defined as a Barthel index score <60 [37]; critical conditions and/or major illnesses with a life expectancy <6 months; (c) inability or unwillingness to provide informed consent. Control participants were enrolled at the Università Cattolica del Sacro Cuore (Rome, Italy) and had the following characteristics: 70+ years of age, no T2DM, and no functional impairment. The study protocol was approved by local ethics committees according to both national and international laws. Prior to enrolment, all participants provided written informed consent. The study was conducted in agreement with legal requirements and international norms (Declaration of Helsinki, 1964).

2.2. Blood Collection and Determination of Serum Concentrations of Amino Acids and Derivatives

The normal distribution of data was ascertained through the Kolmogorov-Smirnov test. Comparisons between F-T2DM and control participants for normally distributed continuous variables were performed by t-test statistics. The non-parametric test Mann-Whitney U was applied to assess differences for non-normally distributed continuous data. Differences in categorical variables between groups were determined via χ2 statistics. Descriptive analyses were performed using the GraphPrism 5.03 software (GraphPad Software, Inc., San Diego, CA), with statistical significance set at p < 0.05.

In order to unveil possible differences in circulating amino acid patterns between F-T2DM and control participants, a multivariate classification strategy based on partial least squares-discriminant analysis (PLS-DA) modeling was adopted [38]. PLS-DA is a classification method particularly suited for dealing with highly correlated predictors, as it is based on projecting the predictors (measured variables) onto a reduced subspace of latent variables (LVs; directions in space) of highest covariance with the responses, i.e., providing the maximum separation between classes. In order to validate the results of PLS-DA modeling and rule out the possibility that good results were obtained because of chance correlation, a procedure based on repeated double cross-validation (DCV) and permutation tests was used [39,40]. DCV consists of spitting the samples to obtain two cross-validation loops, an internal loop for model building/model selection and an outer loop that mimics external (test set) validation. The DCV procedure is repeated a sufficient number of times such that estimates do to depend on one specific sample splitting. This allows evaluating the consistency of model parameters and the confidence intervals for model predictions. To assess the statistical significance of the obtained predictions, the figures of merit which summarize the classification accuracy in repeated DCV [i.e., number of misclassifications (NMC), area under the receiver operating characteristic curve (AUROC), and discriminant (DQ2)] are compared with their distribution under the null hypothesis, which is estimated non-parametrically through permutation tests with 1000 randomizations. A more detailed description of the procedure can be found elsewhere [41]. PLS-DA and DCV were run under Matlab R2015b environment by means of in-house written functions (freely downloadable at: https://www.chem.uniroma1.it/romechemometrics/research/algorithms/plsda/).

The present investigation included 66 F-T2DM older adults and 30 age and sex-matched robust, non-diabetic controls. The main characteristics of the two groups are reported in Table 1. F-T2DM and control participants were comparable for age, sex distribution, and number of diseases. F-T2DM older adults showed higher body mass index relative to controls. As expected, a significant difference was found in physical functional between groups, as indicated by the scores on the short physical performance battery (SPPB).

In the present study, we aimed at identifying profiles of circulating amino acids that discriminate older persons with F-T2DM from functionally intact non-diabetic peers. Among the available statistical options, we selected a PLS-DA-based strategy for its ability to handle multiple interdependent variables. The best PLS-DA model was built using two LVs. As indicated by the stringent DCV applied, the classification performance of the model was almost perfect. Indeed, the proportion of correct classification of participants was 96.6 ± 1.5% over the calibration sets (95.0 ± 2.2% for cases and 100.0 ± 0.0% for controls), 96.6 ± 1.5% (95.0 ± 2.2% for cases and 100.0 ± 0.0% for controls) in the internal DCV loop (i.e., the one used for model selection), and 95.9 ± 1.3% (94.1 ± 1.9% for cases and 100.0 ± 0.0% for controls) in the outer DCV loop, which accounts for the results of repeated external validation.
The remarkable classification performance of the PLS-DA model can be appreciated by inspecting the projection of study participants over the space spanned by the two LVs (Figure 1).
A sharp separation between F-T2DM participants and controls is evident. To ensure the reliability of our findings against the possibility of chance correlations, DCV results of the PLS-DA model were compared with the distributions of specific figures of merit under the null hypothesis. As depicted in Figure 2, for all of the figures considered (i.e., NMC, AUROC, and DQ2), values obtained from the unpermuted dataset fell outside the corresponding null hypothesis distribution, indicating a p value <0.05.
The identification of the metabolites with the greatest discriminating power was accomplished by inspecting variable importance in projection (VIP) indices. Table 2 reports variables with a VIP value higher than 1.
F-T2DM participants showed higher serum levels of 3-methyl histidine, alanine, arginine, ethanolamine, glutamic acid, sarcosine, and tryptophan. Instead, controls were characterized by higher circulating levels of ornithine and taurine. Serum concentrations of non-discriminant analytes in the two participant groups are listed in Table S1.

This work was supported by grants from the European Commission - EU 7th Framework Programme (Contract N° 278803), and Innovative Medicine Initiative-Joint Undertaking (IMI-JU #115621). The work was also partly supported by the nonprofit research foundation “Centro Studi Achille e Linda Lorenzon”. The funders had no role in study design, data collection and analysis, preparation of the manuscript, or decision to publish.

The authors thank Luca Mariotti for his precious technical and administrative support. 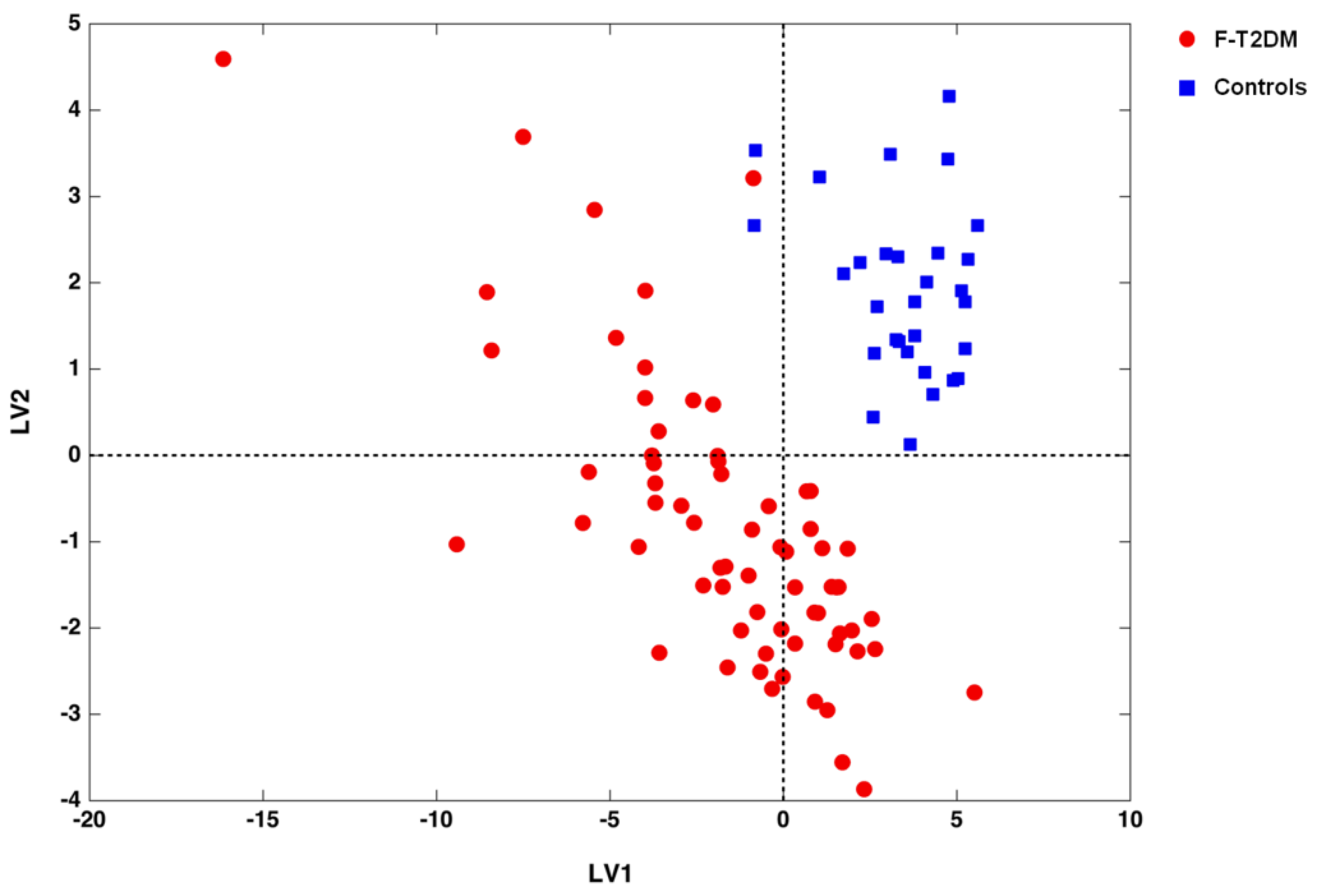