The global epidemic of overweight and obesity has become a major challenge for public health. Excessive adiposity leads to adverse metabolic consequences, including insulin resistance, chronic inflammation, and abnormal lipid metabolism, thereby increasing the risk of various diseases, such as cardiovascular diseases and diabetes [1]. Dietary and lifestyle interventions, i.e., restriction in calorie intake and increase in physical activity, are commonly recommended as an ideal strategy to counteract obesity development, but motivation and adherence are challenging [2]. Medications approved for overweight and obesity treatment include orlistat, lorcaserin, and liraglutide, and these drugs are intended only for patients with a body mass index (BMI) ≥ 30 or BMI ≥ 27 with comorbidities [3]. Because of a high incidence of side effects [3], anti-obesity drugs should be used only if the expected benefits outweigh the possible risks. As an alternative approach, many researchers have focused on the anti-obesity effects of natural ingredients that are consumed on a daily basis, because such ingredients are generally considered less toxic than synthetic drugs [4].
Prunus persica (L.) Batsch (Rosaceae family) is a deciduous fruit tree that originated in China and is now cultivated worldwide for its fruit, peach. The seeds, flowers, and leaves of P. persica have long been used as folk medicine in China and Korea [5,6,7]. In particular, the flower of P. persica (PPF), commonly called the peach blossom, has been used as a purgative, diuretic, and cosmetic [6,7]. Previous studies have revealed several pharmacological effects of PPF, including protection of the skin from ultraviolet radiation [8,9], inhibition of melanogenesis [10], stimulation of intestinal motility [6], and purgative action [11]. PPF is currently consumed as a tea for weight loss in China and Korea; however, its anti-obesity effects have yet to be demonstrated in vitro or in vivo.
PPF is rich in flavonoids and phenolic phytochemicals, the major compounds being chlorogenic acid, kaempferol and its derivatives (including multiflorin A and B, astragalin, afzelin, and trifolin), and quercetin derivatives (such as quercitrin, isoquercitrin, rutin, hyperoside, hyperin, and multinoside A and B) [8,9,11,12,13,14]. Many of these compounds have been reported to possess anti-obesity properties in vitro or in vivo. Chlorogenic acid reduced adiposity and improved lipid metabolism in diet-induced obese mice [15]. Astragalin, isoquercitrin, and hyperoside increased lipolysis in the adipose tissue of mice [16]. Kaempferol, quercitrin, and isoquercitrin have been shown to inhibit adipogenesis in 3T3-L1 adipocytes [17,18,19]. Rutin inhibited adiposity, increased energy expenditure, and improved glucose homeostasis in obese mice [20]. In addition, multiflorin A and hyperin have shown anti-hyperglycemic activities in rodents [21,22]. These previous studies propose that PPF may be effective in reducing obesity and related metabolic disorders.
The present study aimed to determine whether PPF exerts anti-obesity effects in a diet-induced obesity model. Male C57BL/6 mice were fed a high-fat diet (HFD) with or without PPF water extract for 8 weeks, and the body weight, fat mass, organ weights, and serum biochemical profiles were measured. We also explored the molecular mechanism underlying the effects of PPF on lipid metabolism in the liver of HFD-fed mice.

Male C57BL/6 mice (3 weeks old) obtained from Orient Bio Inc. (Seongnam, Republic of Korea) were housed in standard laboratory conditions (23 ± 1 °C, 55% ± 5% humidity, and 12 h light/dark cycle). Male mice were chosen since they have a higher susceptibility to obesity than female mice [24]. After a week’s acclimation period, the mice were randomly divided into four groups with twelve mice in each group: normal diet (ND), HFD control, HFD + 0.2% PPF, and HFD + 0.6% PPF groups. The ND group received standard chow for 8 weeks, while the HFD control group received an HFD with 60% kcal fat (Research Diets Inc., New Brunswick, NJ, USA, Cat. No. D12492). The HFD + 0.2% PPF and HFD + 0.6% PPF groups received a HFD containing 0.2% and 0.6% PPF extract, which were equivalent to approximately 200 and 600 mg/kg/day, respectively. All mice were given free access to food and distilled water. Their food intake and body weight were measured twice a week. All mice were checked once daily for clinical signs during the experimental period. After 8 weeks, all mice were fasted for 12 h before sacrifice and blood samples were collected from the inferior vena cava under 2% isoflurane anesthesia. Liver, spleen, and abdominal adipose tissues (epididymal, perirenal, and mesenteric) were quickly removed and weighed. The blood samples were kept at room temperature for 30 min, and then centrifuged at 3000 rpm for 10 min at 4 °C to obtain the serum. The liver tissue was stored at −80 °C for further analysis. The animal experimental protocols were approved by the International Animal Care and Use Committee of Korea, Institute of Science and Technology for Eastern Medicine (Approval No. KISTEM-IACUC-2016-002).

All data are presented as mean ± standard deviation. The differences between more than two groups were compared by one-way analysis of variance (ANOVA) followed by Tukey’s multiple comparison test. The difference between the two groups was compared by independent t-test. Statistical analysis was performed using Prism 5 software (GraphPad Software, Inc., San Diego, CA, USA). A probability value of p < 0.05 was considered statistically significant.

The HPLC chromatogram of PPF extract is shown in Figure 1. Prunin was detected at a retention time of 32.5 min and quantified as 2.59 mg/g of dried extract.

The administration of an HFD for 8 weeks significantly increased the body weight and body weight gain compared to the ND group (both p < 0.001, Figure 2a–c). In contrast, mice fed an HFD containing 0.2% and 0.6% PPF extract had markedly decreased body weight and body weight gain at 8 weeks compared with those in the HFD control group (all p < 0.001, Figure 2b,c). There were no significant differences in food intake between the groups (Figure 2d). In addition, mice treated with PPF showed no abnormal clinical signs during the study period.

After eight weeks of feeding, abdominal fat weights in the HFD control group were increased by approximately four times the levels found in the ND group, confirming that HFD resulted in obesity in mice (all p < 0.001, Figure 3a–d). The supplementation with 0.2% and 0.6% PPF extract significantly reduced the total and individual (epididymal, perirenal, and mesenteric) fat pad weights compared to the HFD control group (all p < 0.001).

HFD feeding significantly increased serum glucose, total cholesterol, ALT, and AST levels compared to those in the ND group (all p < 0.001, Table 1), while triglyceride levels were not altered. The serum glucose levels were significantly reduced in the HFD + 0.2% PPF and HFD + 0.6% PPF groups in a dose-dependent manner compared to those of the HFD group (both p < 0.001). There were no significant differences between the HFD and HFD + PPF groups in the total cholesterol and triglyceride levels. In contrast, ALT and AST levels were significantly reduced by supplementation with 0.2% PPF extract (both p < 0.01) as well as 0.6% PPF extract (p < 0.001 and p < 0.05, respectively).

3.5. Effects of P. persica Flower on Liver and Spleen Weights

3.6. Effects of P. persica Flower on Lipogenesis-Related Gene Expression in the Liver

To investigate the mechanisms underlying the effects of PPF, we compared the expression of genes involved in hepatic lipid metabolism between the HFD and HFD + PPF groups. Since high-dose (0.6%) PPF was more effective than low-dose (0.2%) at reducing adiposity, the HFD + 0.6% PPF group was selected for further comparison. The mRNA levels of hepatic lipogenic enzymes, including SCD-1, SCD-2, and FAS were significantly decreased in the HFD + 0.6% PPF group compared to the HFD control group (all p < 0.001, Figure 5), while there was no difference in the mRNA level of SREBP-1c between the two groups.

To investigate the role of PPF on β-oxidation process, we measured the gene expression of PPARα and CPT-1. There was no difference in the mRNA level of PPARα between the two groups (Figure 6), while CPT-1 mRNA level was significantly increased in the HFD + 0.6% PPF group compared to the HFD control group (p < 0.01).

Our results demonstrate that PPF has anti-obesity effects accompanying the decrease in obesity-induced hyperglycemia and liver and spleen damage. These beneficial effects might be mediated by reduced lipogenesis and increased fatty acid oxidation in the liver. Our findings provide evidence to support the potential health benefits of PPF in managing obesity and obesity-associated metabolic disorders.

This work was supported by the Bio-Synergy Research Project (NRF-2012M3A9C4048795) of the Ministry of Science, ICT and Future Planning through the National Research Foundation. 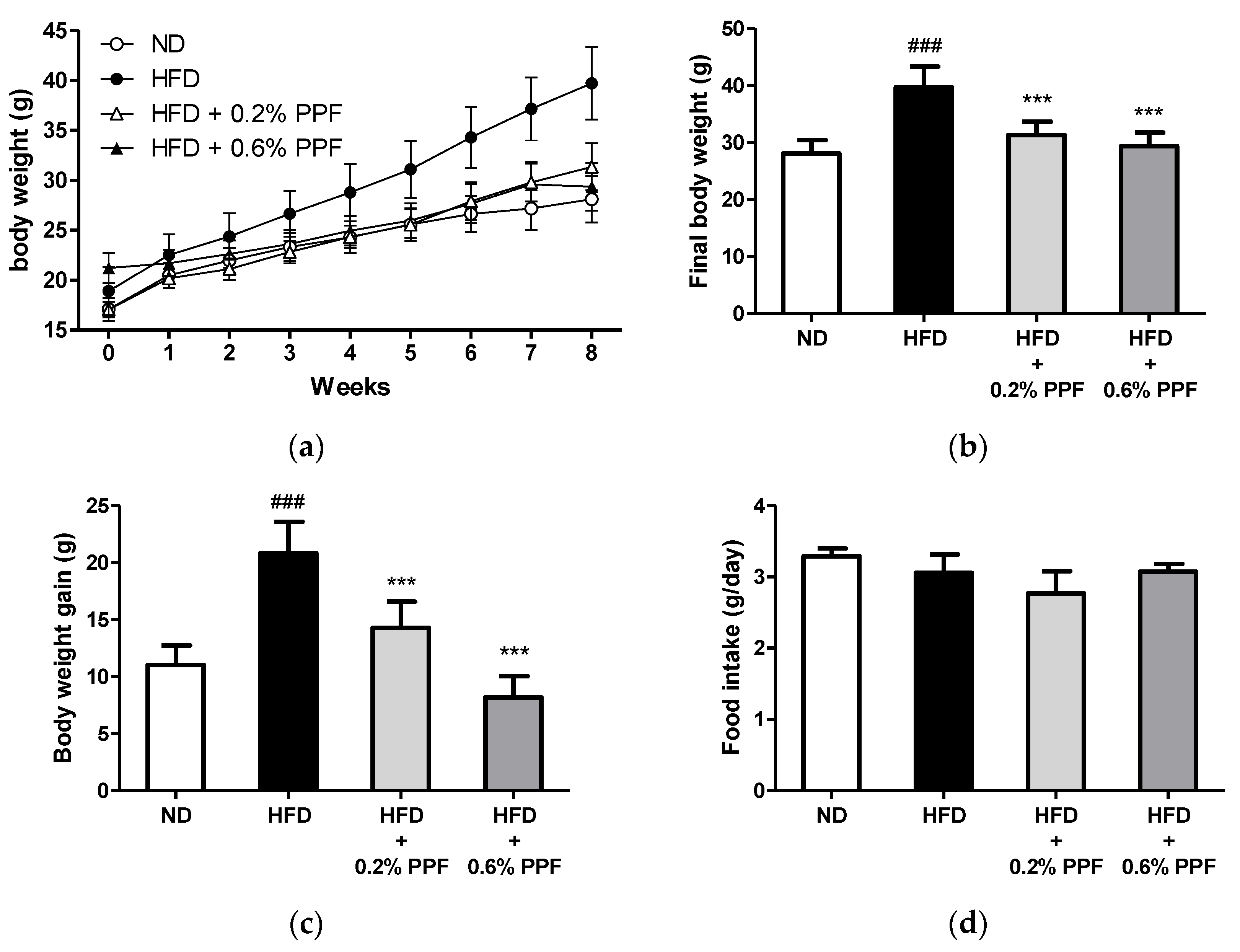 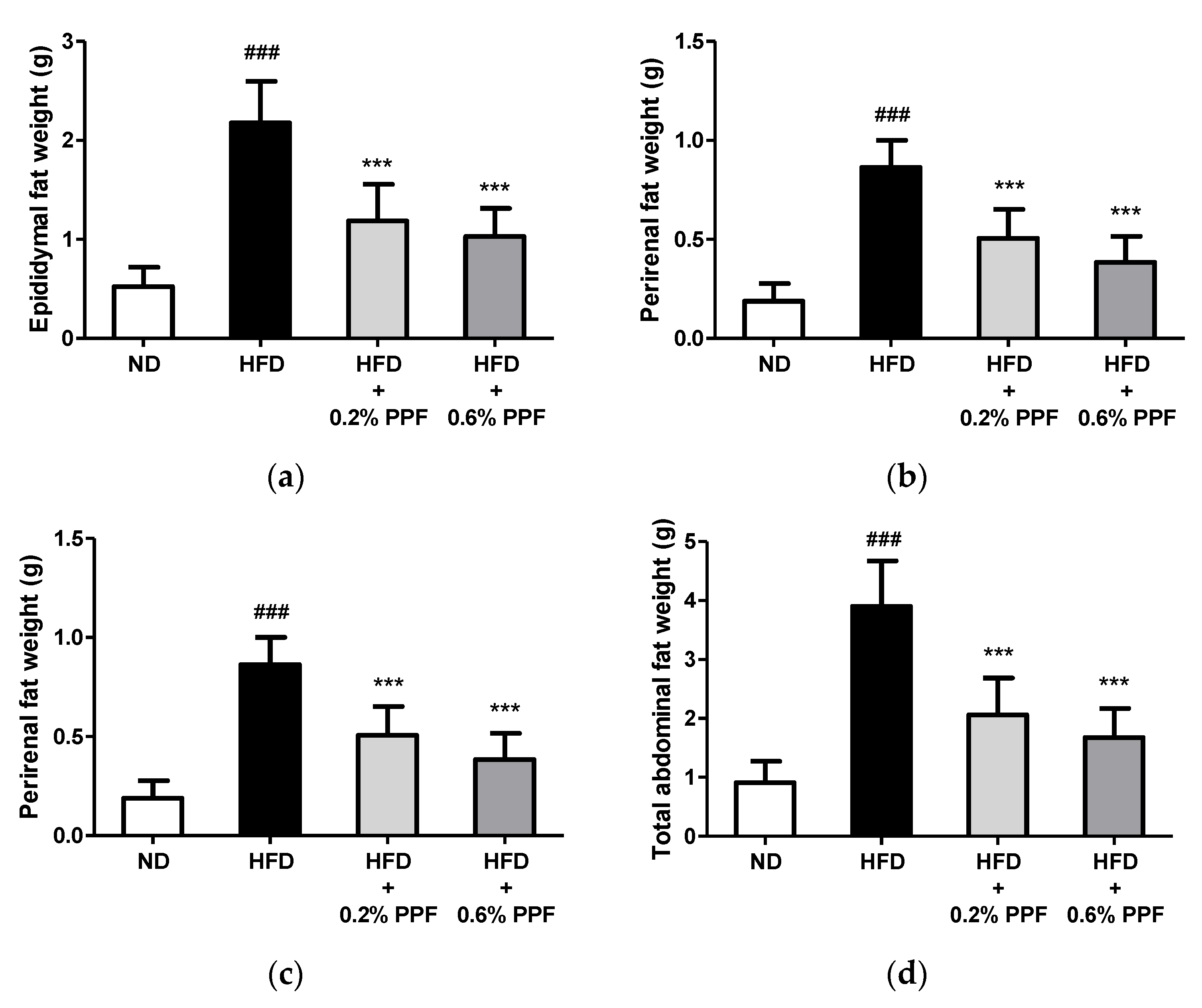 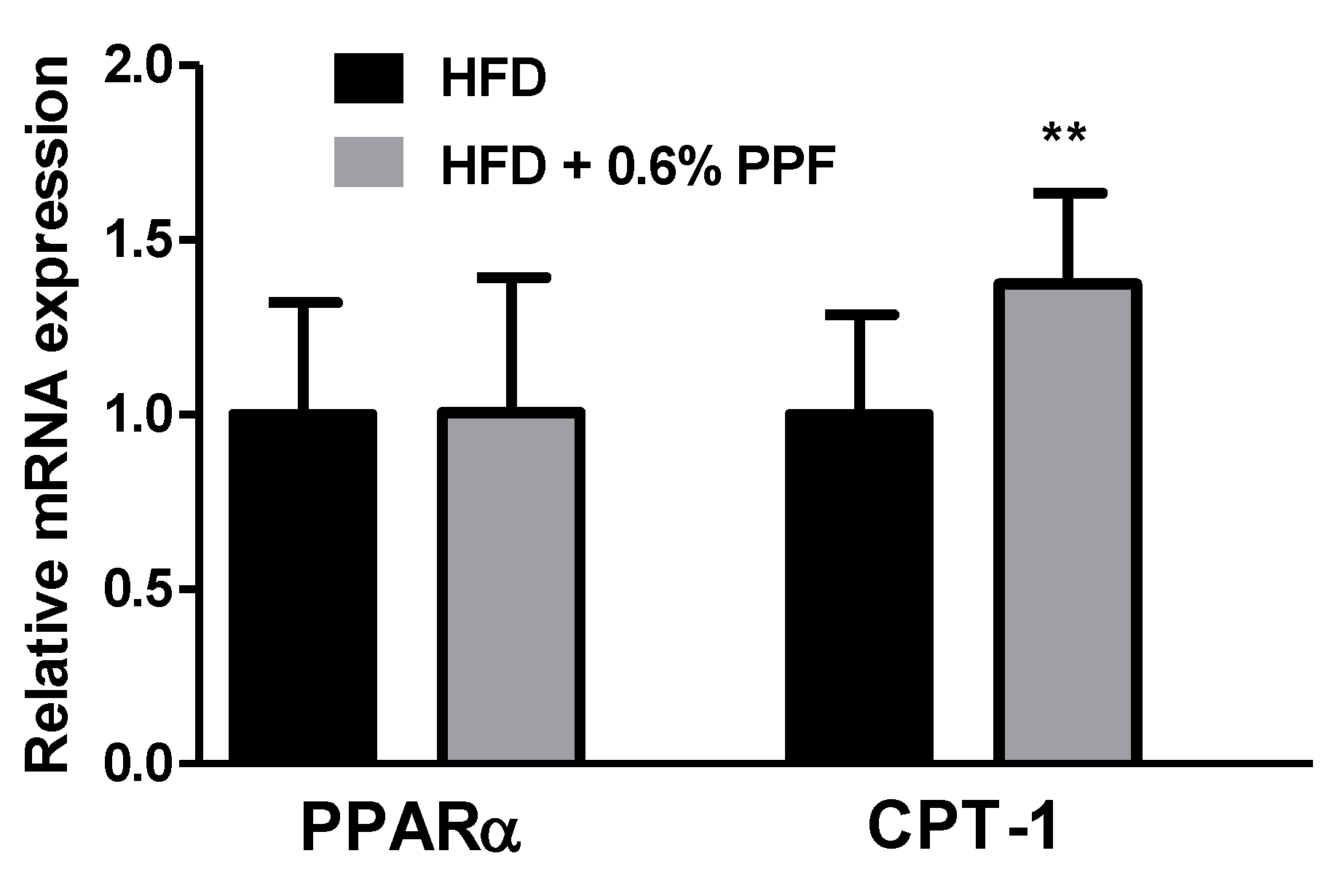