Strenuous exercise transiently reduces immune function, resulting in an increased risk of infection, such as upper respiratory tract infections, in athletes [1,2]. Since exhaustive exercise inhibits systemic tumor necrosis factor-α (TNF-α) production that normally occurs in a bacterial infection model (injection of lipopolysaccharide [LPS]), immunodepression after strenuous exercise is involved in increased susceptibility to microorganism infection [1,2,3]. Therefore, preventing exhaustive exercise-induced immunodepression is important for athletes and exercise enthusiasts.
Pharmacological and pathogenic immunodepression is improved in mice by supplementation with β-glucan and vitamin D extracted from mushrooms [4,5]. Sparassis crispa is an edible mushroom that contains high amounts of β-glucan, more than 30% of the dry weight of the fruiting bodies, compared with levels in other mushrooms [6]. Several studies have revealed that consumption of S. crispa and β-glucan extracted from S. crispa has immunopotentiative effects, such as enhanced inflammatory cytokine production in splenocytes, improved peripheral NK cell activity, and anti-tumor action [6,7,8,9]. Based on these results, S. crispa consumption enhances immune function. Therefore, we hypothesized that S. crispa consumption may improve acute exhaustive exercise-induced immunodepression. However, the effect of S. crispa intake on exhaustive exercise-induced reduction of immune response to bacterial infection is unclear.
Therefore, the aim of this study was to investigate the effects of S. crispa intake on reduced LPS-induced TNF-α production that occurs upon exhaustive exercise, both systemically and in various tissues of mice. Moreover, to investigate the molecular mechanism of the effect of S. crispa, we examined LPS-induced activation of the Toll-like receptor 4 (TLR4) signal pathway in each tissue.

The exercise protocol was as follows [10,11]: Mice ran on a treadmill at a starting speed of 9 m/minute. The speed was increased by 2 m/minute every three minutes until 17 m/minute. Thereafter, we continued to increase the speed by 1 m/minute every three minutes until exhaustion. Exhaustion was defined as the point at which a mouse refused to run despite being lightly touched. No electric shocks were used during the treadmill runs. In this experiment, the mean running times in the CD + Ex and SD + Ex groups were 69 ± 7 and 72 ± 4 min, respectively (N.S.). The CD + N group was maintained in a sedentary condition for 60–70 min without access to food and water.

Plasma and tissue TNF-α concentrations were measured by an enzyme-linked immunosorbent assay (ELISA) using a commercially available murine kit (R&D Systems, Minneapolis, MN, USA). The absorbance was measured at 450 nm by microplate reader using an xMark microplate spectrophotometer (Bio-Rad Laboratories, Hercules, CA, USA) and was proportional to the concentration of TNF-α in the sample by using linear fit of the log–log plot of the standard curve.

All values are expressed as the mean ± SEM. Statistical evaluations were performed using one-way ANOVA. Fisher’s post-hoc test was used to correct for multiple comparisons when analyses revealed significant differences. Data were considered to be significantly different when p-values were less than 0.05.

3.1.3. Effect of S. crispa Intake and Exhaustive Exercise on TNF-α Concentration in Mouse Tissues in Response to LPS

3.1.4. Effect of S. crispa Intake and Exhaustive Exercise on TLR4 Signaling in Mouse Tissues in Response to LPS

These findings of this study revealed that continuous S. crispa intake prevents the reduction of LPS-induced TNF-α production that occurs after exhaustive exercise, and may exert this effect by ameliorating TLR4 and MyD88 protein levels in the small intestine.

This work was supported by a Grant-in-Aid for Scientific Research from the Ministry of Education, Culture, Sports, Science and Technology of Japan (KAKENHI: #19K19962 to M.U. and #17H02182 to M.I.)

Kyoei-Seimitsu Corp. provided funding for the study and supplied the test supplements. 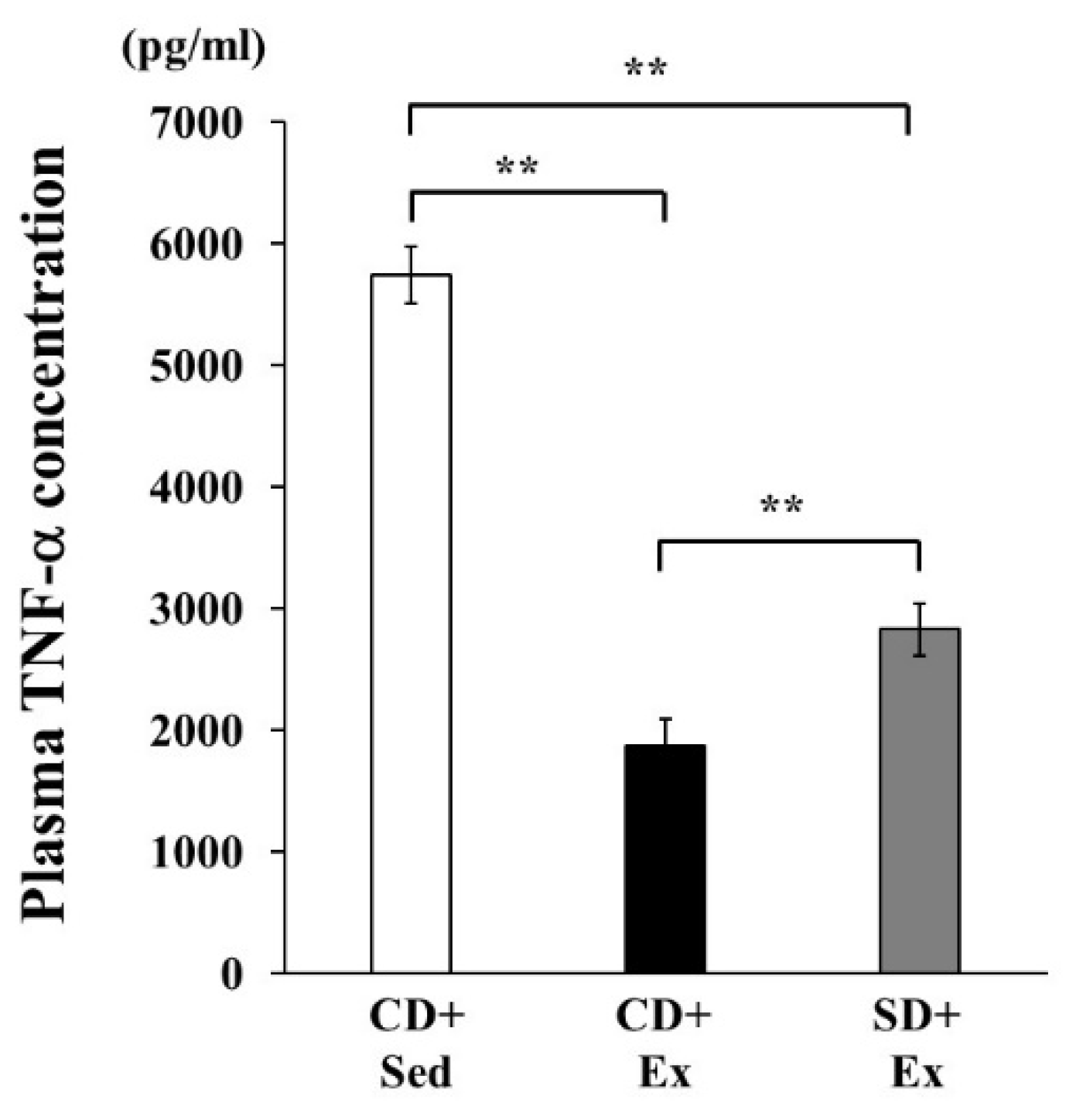 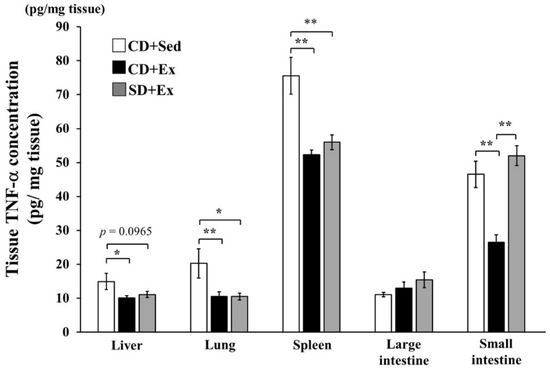 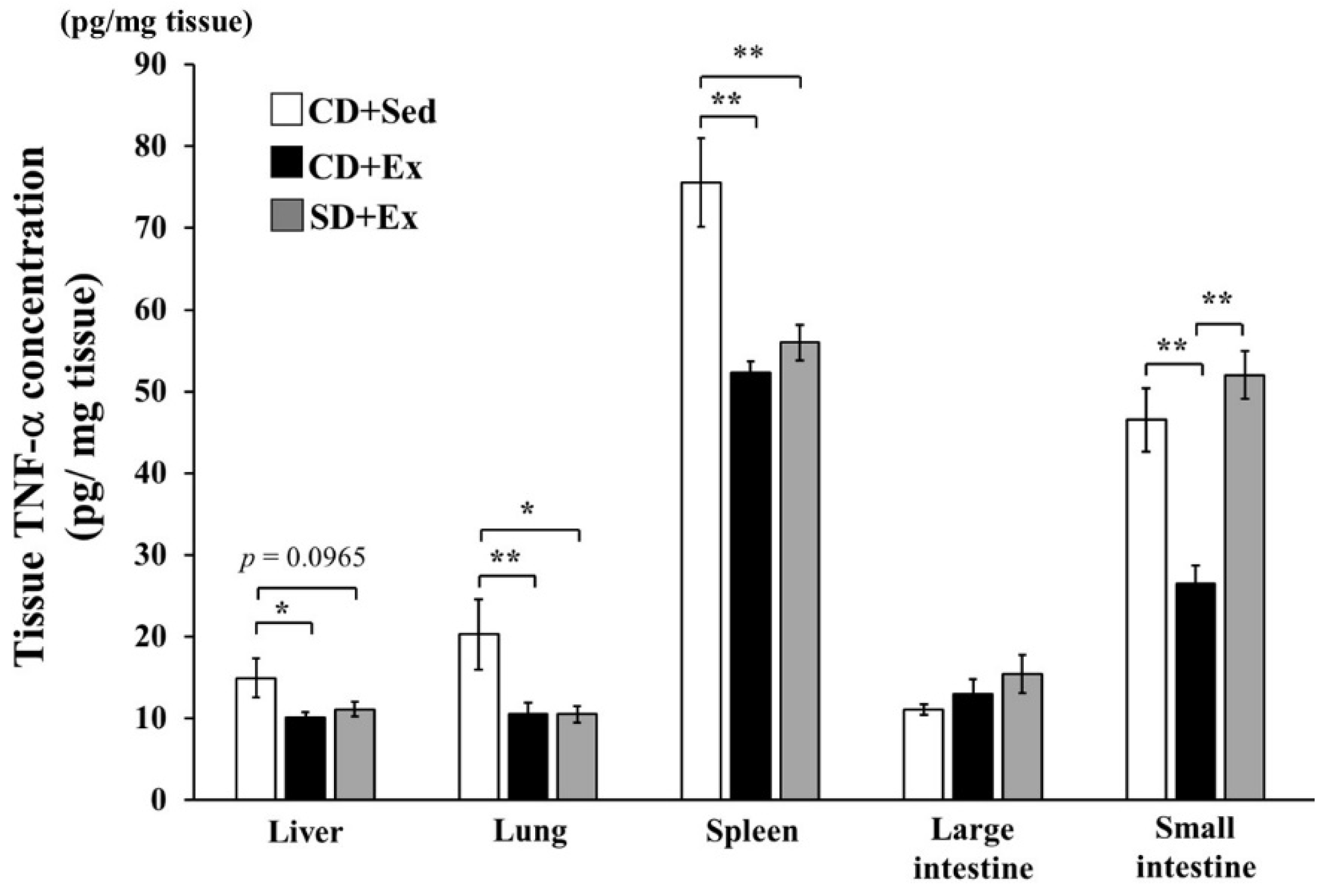 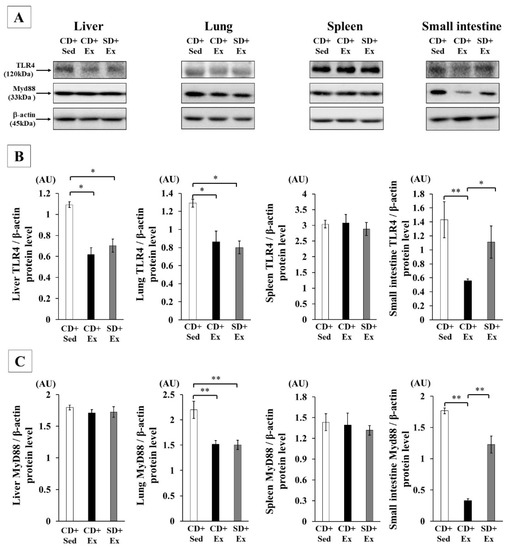 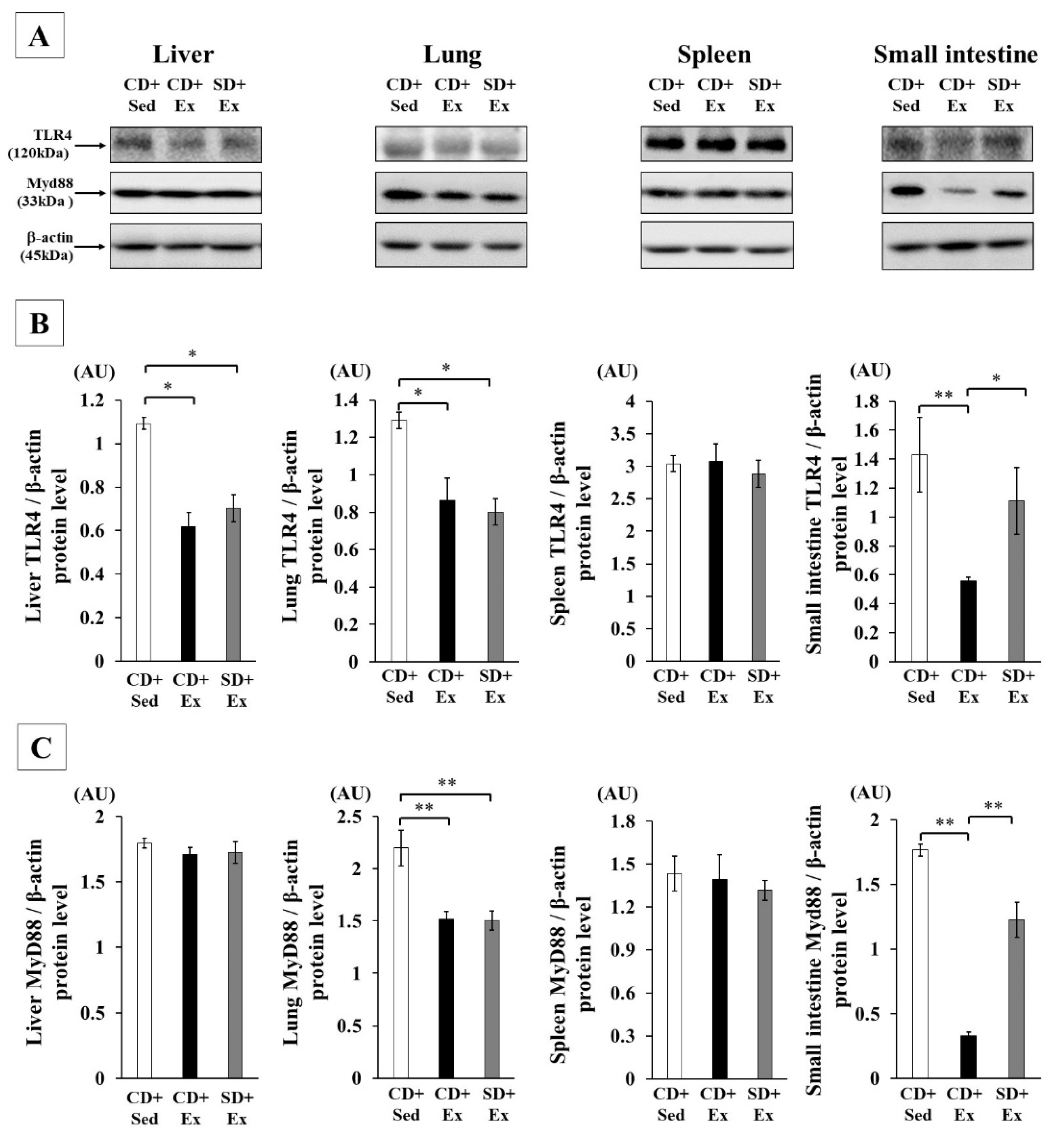