How is Satiety Affected When Consuming Food While Working on A Computer?
Previous Article in Journal

The effect of a sucrose diet and repeated one-day starvation on oxidative status in the ovary and uterus is still unknown. Our analysis focused on carbohydrate-lipid metabolism parameters and the changes in red blood cells, ovary and uterus superoxide dismutase (SOD), catalase (CAT), glutathione peroxidase (GPx) activities and malonylodialdehyde (MDA) concentration in rats fed with a diet containing 16% of sucrose and subjected to systematic one-day starvation when using such a diet. It was found that a diet with 16% sucrose contributed to the increase of antioxidant enzyme activity in the blood (GPx and CAT) and uterus (SOD), without changes in MDA concentrations, which indicates an increase in reactive oxygen species (ROS) concentration in these tissues, being balanced by an increase in antioxidant enzyme activity. The introduction of a regular one-day starvation period into the diet intensified oxidative stress and led to a redox imbalance in the reproductive tissues of female rats. This was manifested by higher GPx activity, lower CAT activity and higher MDA concentration in the uterus and lower GPx and CAT activities and lower MDA concentration in the ovaries. The observed changes may be the cause of fertility disorders and possible problems with fertilised egg cell implantation into the uterine tissue.
Keywords: sucrose; starvation; carbohydrate-lipid metabolism; oxidative status; uterus; ovary; rat sucrose; starvation; carbohydrate-lipid metabolism; oxidative status; uterus; ovary; rat

The role of excessive sugar intake on health and disease is currently an active area of scientific and political debate. The World Health Organization (WHO) strongly recommends adults and children reduce their daily intake of free sugars to less than 10% of their total energy intake. According to a conditional recommendation, a further reduction of free sugar intake to a level below 5% of total energy would provide additional health benefits [1]. Despite these recommendations, sugar consumption remains high in both developed and developing countries [2]. The available data suggest that in Europe the percentage of sugars in total energy were highest in infants (<4 years), with mean values ranging from 20.0% to 38.4%, and decreased over the lifespan to 13.5–24.6% in adults [3]. The data collected by Newens and Walton [4] across the world also suggest that sugars (all mono-and disaccharides) as a percentage of energy are highest in infants and young children, with an average value of 28%, and decrease over the lifespan to 20% in adults.
Since chronic intake of a sugar-rich diet increases overall energy intake and body weight, some young women follow a regularly repeated one-day starvation diet for “body cleansing” and weight maintenance or reduction [5].
It has been shown that one of the factors facilitating the initiation and progression of metabolic disorders in the course of chronic high-sucrose consumption may be a disturbance of prooxidative and antioxidative balance [6].
There are numerous reports on the increased oxidative damage to human or experimental animal plasma, liver, skeletal muscles and heart in the course of a high-sucrose diet. The effect of a sucrose diet on oxidative stress in ovary and uterus is still unknown. However, it is well known that a balance between reactive oxygen species (ROS), such as superoxide anion radical and hydrogen peroxide and antioxidants components, such as catalase (CAT), superoxide dismutase (SOD), glutathione peroxidase (GPx), is essential to enhance steroidogenesis, ovulation and implantation [7]. ROS play a crucial role in follicle rupture induced by gonadotropins [8]. The main sources of physiological ROS production in steroidogenic tissues are mitochondria and metabolic processes [9], but excessive ROS can affect a tissue by generating excess lipid peroxidation, oxidation, and different lesions in DNA [10]. When there are deviations from their normal physiological ranges, it may lead to several diseases in these tissues [11]. Oxidative stress participates in the pathogenesis of endometriosis, unexplained infertility, anovulation, and the impairment of oocyte quality in the reproductive system. Therefore, there is a delicate balance between ROS and antioxidant species the ovary and uterus.
Since reproduction and metabolism in females are closely related and reciprocally regulated [12,13], it has been hypothesised that a sucrose diet and a starvation diet are the cause of carbohydrate-lipid metabolism disturbances and oxidative stress in tissues such as the ovaries or uterus. As regards the prooxidant-antioxidant balance, our analysis focused on the changes in red blood cells, ovary and uterus superoxide dismutase (Cu/Zn-SOD, EC 1.15.1.1), catalase (CAT, EC 1.11.1.6), glutathione peroxidase (GPx, EC 1.11.1.9) activities and malonylodialdehyde (MDA) concentration.
This study aimed at investigating the effect of sucrose administered in the amount of 16% of diet composition (18% of total energy) and a one-day starvation diet repeated once a week on the carbohydrate-lipid metabolism and free radicals processes in the ovaries and uterus of female rats. The sugar amount was set, taking into account the composition of modern diets of many people in which the percentage of added sugars is up to 20% [14].

The study was conducted on 30 female Wistar rats, 3 months old, with the initial body weight of 204.7 ± 15.1 g. The animals were purchased from the Department of Toxicology of Poznań University of Medical Sciences. After a week of adaptation (drinking water and basic feed) to new vivarium conditions (temp. 21–22 °C, relative humidity 55–60%, light-dark cycle 12/12 h), the animals were divided into three groups (n = 10 each) of equal body weight, housed in individual cages, fed ad libitum pelleted feeds. All the protocols were approved by the Local Research Ethics Committee (Approval No. 18/2015) in accordance with the European Convention for the Protection of Vertebrate Animals used for Experimental and other Scientific Purposes, Council of Europe, Strasbourg 1986.
The basic feed corresponded to the nutrient requirements AIN-93M [15] and mainly included whole wheat and maize grain. In the modified feed, part of wheat grain and maize grain from the basic feed was replaced by wheat flour (type 500) and sucrose. The fodders were designed to reflect the changes taking place nowadays in the composition of diets which contain simple sugars and refined carbohydrates. The detailed composition of fodders used in the experiment are presented in Tables S1 and S2.
The prepared feed mixes were subjected to chemical analysis [16] in order to determine the content of total nitrogen (Kjeldahl method, using a Kjeltec 2100 system from Foss Tecator Hillerod, Denmark) converted into an amount of protein; crude fat (Soxhlet method, using a Soxtec HT6 system from Foss Tecator Hillerod Denmark), crude fiber with the gravimetric method (ANKOM 220 Fiber Analyzer, ANKOM Technology, Macedon, NY, USA), dry matter and ash (gravimetric method, using SUP-4M laboratory dryer Wawa-Med, Warsaw, Poland and muffle furnace Czylok Jastrzębie Zdrój, Poland). The content of carbohydrates was estimated from the difference between dry mass and the sum of the other solid ingredients. The content of gross energy and metabolic energy was estimated using the commonly applied energy equivalents [17]. The content of zinc, cooper, selenium and iron was also determined in feeds by atomic absorption spectrophotometry on ICE-3300 (Thermo Scientific, Walthom, MA, USA).
During the experiment, group I (CG—control group) received the basic feed, group II (SG—sugar group) received the modified feed, over the whole experimental period, and group III (PSG—periodically starved group) received the modified feed and was starved one day in every week (6 days on the modified feed + 1 day starvation). Animals from all groups received tap water to drink.
The experiment lasted 8 weeks, during which the amounts of consumed feed were evaluated. After the eighth week of treatment, we started to sacrifice rats and collect samples after determining that the rats were in the oestrus phase. The status of the oestrus phase was determined by examining the type and abundance of cells present in the vaginal lavage, according to the methodology described by Marcondes et al. [18]. Body weight was also recorded at this time. The assigned rats were fasted overnight (12 h), and anaesthetised with an intramuscular injection (10 mg/kg b.w.) of Ketanest (Pfizer Ireland Pharmaceuticals, Ireland).

Blood was taken from the heart by cardiac puncture and collected into vacuum tubes (Sarstedt, Germany) with EDTA anticoagulant for erythrocyte and plasma analysis.
Immediately after blood collection, the ovaries and uterus were dissected and weighed to the nearest 0.001 g. The tissues were washed with phosphate-buffered saline (PBS) solution, pH 7.4, immediately frozen in liquid nitrogen and stored at −70 °C until analysis.
Blood samples were immediately centrifuged (1000× g, 10 min, 4 °C) to separate plasma and erythrocytes.
Erythrocytes were washed three times with cold phosphate-buffered NaCl solution (phosphate saline buffer: 0.01 M phosphate buffer, 0.14 M NaCl, pH 7.4), chilled to 4 °C, and finally frozen at −70 °C. Plasma was divided into aliquots and immediately deep-frozen at −70 °C until analysis, but not longer than one month.

All data are expressed as means ± S.E.M. Differences between groups were analyzed using one-way ANOVA and the Tukey test using Statistica 12.0® program (Statsoft, Tulsa, OK, USA). To assess the homogeneity of variances and normality of distribution, the Levene test and a modified Shapiro–Wilk test were used, respectively. If these assumptions were not met, a logarithmic transformation was applied to the data before ANOVA. Differences between groups were considered significant when p ≤ 0.05.

In conclusion, it was found that a diet with 16% sucrose contributed to the increase of antioxidant enzyme activity in the blood (GPx and CAT) and uterus (SOD), without changes in MDA concentrations, which indicates an increase in ROS concentration in these tissues, being balanced by an increase in antioxidant enzyme activity. The introduction of a regular one-day starvation period into such a diet intensified oxidative stress and led to a redox imbalance in the reproductive tissues of female rats. This was manifested by higher GPx activity, lower CAT activity and higher MDA concentration in the uterus and lower GPx and CAT activities and lower MDA concentration in the ovaries. The observed changes may have been due to metabolic disorders (greater amount of visceral adipose tissue, higher glucose concentration and HOMA-IR index and lower HDL-C level) and hormonal disorders (higher oestrogen concentration). The observed changes may be the cause of fertility disorders and possible problems with fertilised egg cell implantation into the uterine tissue. The reason being that the reproductive system uses ROS in the processes necessary for reproduction. 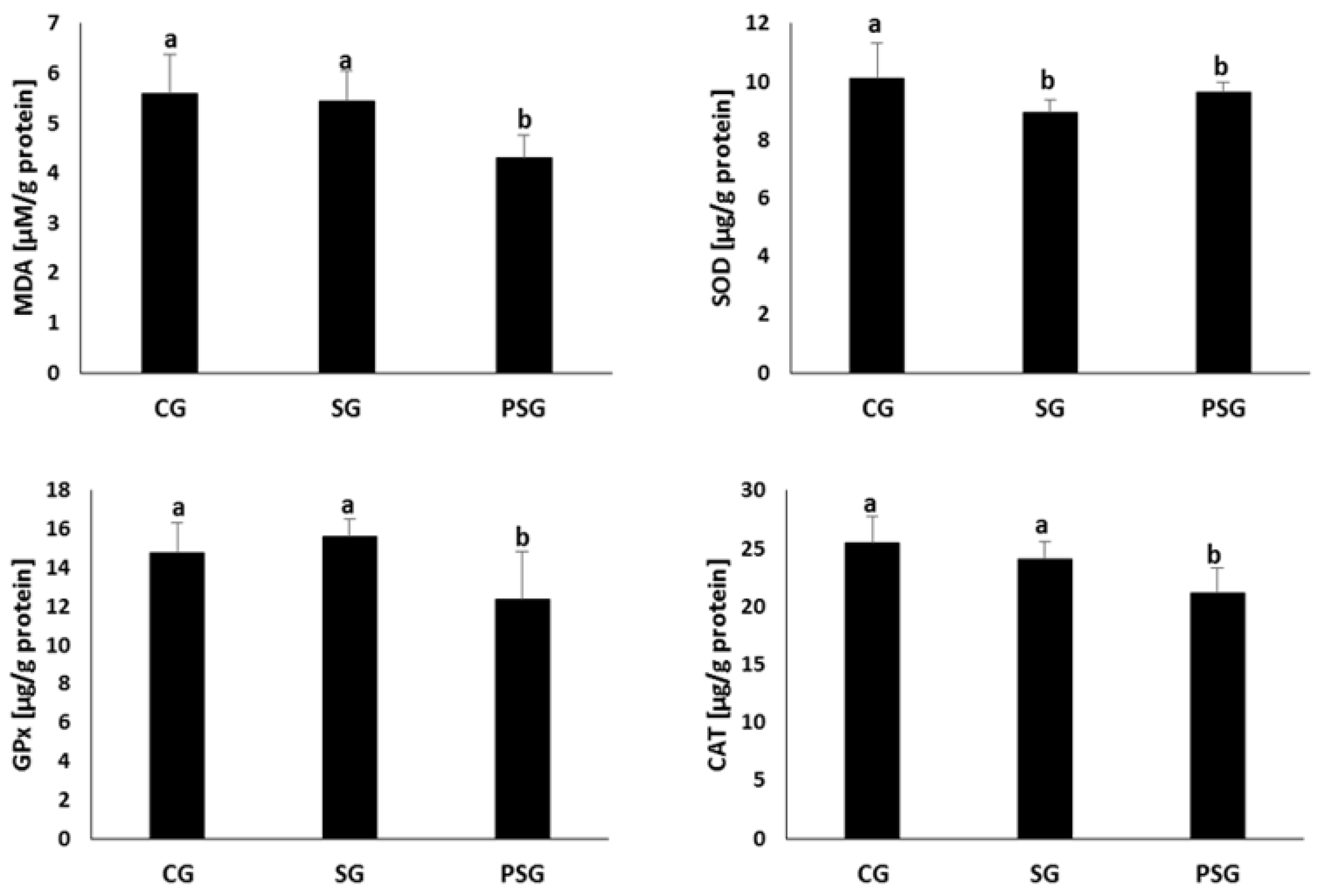