Seminal but not Serum Levels of Holotranscobalamin are Altered in Morbid Obesity and Correlate with Semen Quality: A Pilot Single Centre Study
Next Article in Special Issue

Of Mice and Men—The Physiology, Psychology, and Pathology of Overhydration

The detrimental effects of dehydration, to both mental and physical health, are well-described. The potential adverse consequences of overhydration, however, are less understood. The difficulty for most humans to routinely ingest ≥2 liters (L)—or “eight glasses”—of water per day highlights the likely presence of an inhibitory neural circuit which limits the deleterious consequences of overdrinking in mammals but can be consciously overridden in humans. This review summarizes the existing data obtained from both animal (mostly rodent) and human studies regarding the physiology, psychology, and pathology of overhydration. The physiology section will highlight the molecular strength and significance of aquaporin-2 (AQP2) water channel downregulation, in response to chronic anti-diuretic hormone suppression. Absence of the anti-diuretic hormone, arginine vasopressin (AVP), facilitates copious free water urinary excretion (polyuria) in equal volumes to polydipsia to maintain plasma tonicity within normal physiological limits. The psychology section will highlight reasons why humans and rodents may volitionally overdrink, likely in response to anxiety or social isolation whereas polydipsia triggers mesolimbic reward pathways. Lastly, the potential acute (water intoxication) and chronic (urinary bladder distension, ureter dilation and hydronephrosis) pathologies associated with overhydration will be examined largely from the perspective of human case reports and early animal trials.
Keywords: hydration; dehydration; hypohydration; hyponatremia; polydipsia hydration; dehydration; hypohydration; hyponatremia; polydipsia

Hydration and the evolving search for an adequate universal daily water intake recommendation remains elusive [1] and somewhat contentious [2,3]. Most of the disagreement over an adequate index for fluid intake, however, likely revolves around the disparate and non-standardized metrics commonly utilized to define both normal and abnormal hydration status (HS) [4]. For example, the clinical definition of dehydration is cellular dehydration from extracellular hypertonicity [5,6] while scientists often use the term dehydration to describe the process of losing water [4]. Alternatively, the term hypohydration refers to a negative water balance [7] or state of water deficit [4]. Regardless of which hydration terminology is utilized to define HS, the vast majority of the scientific and lay literature highlights the well-recognized detrimental effects of dehydration and/or hypohydration on a variety of conditions such as kidney stones [3], obesity [8], recurrent urinary tract infections [9], cognition [10], and athletic performance [11].
At the opposite end of the hydration spectrum, a paucity of data exists on the topic of overhydration. In 1923, Rowntree published a series of animal and human data exploring the detrimental effects of “water intoxication” [12]. Rowntree successfully induced water intoxication (characterized by restlessness, lethargy, polyuria, diarrhea, salivation, frothing at the mouth, nausea, retching, vomiting, muscle twitching, seizures, coma and death) in dogs, cats, rabbits and guinea-pigs by rapidly administering tap or distilled water (50 mL/kg bodyweight every 30 min) rectally, intravenously, through a stomach tube and/or ureteral catheter to induce water overload [12]. Combined with similar human cases of water intoxication [13,14,15,16,17], it appears clear that extreme fluid administration in excess of excretion rates—or more modest intakes when coupled with pathological anti-diuretic hormone secretion—are indeed detrimental (and sometimes toxic) to health [12].
Thus, while the current evidence suggests that modest hypohydration and extreme overhydration have deleterious health consequences, the question remains whether modest overhydration is beneficial or detrimental to health. This review will explore the physiology, psychology, and pathology of overhydration. Both animal (mostly mice) and human studies will be detailed, with an emphasis placed upon the psychogenic polydipsia literature to more clearly evaluate: (1) long-term physiological changes associated with concomitant and sustained polyuria and (2) the putative neurogenic pathways which may differentially drive high (anxiolytic) versus low habitual fluid consumption. We will refer to the term polydipsia to represent excessive drinking (beyond regulatory need) without any known medical cause [18].

At the most extreme range of overhydration, compulsive water drinking has been recognized in emotionally disturbed individuals without neurogenic (i.e., inability of secrete AVP from the posterior pituitary) or nephrogenic (i.e., kidneys resistant to AVP stimulation) diabetes insipidus [47]. Sometimes referred to as “psychogenic polydipsia” [52,53], 80% of compulsive water drinkers represent neurotic females with a history of schizophrenia [40,54], depression [14,45], and/or anxiety [53,55]. Psychogenic polydipsia in schizophrenic patients was first identified in 1936 through investigation of profuse polyuria, which eventually ceased when the polydipsia was minimized [56].
To a more modest degree of drinking, social polydipsia—or overdrinking to achieve health benefits—has become popularized within western culture. The most common “one-size-fits-all” guideline suggests that all healthy humans need to drink at least eight glasses of water daily beyond fluids obtained through foods or other beverages. This popular recommendation persists despite equivocal evidence, which supports the claim that water intake maximizes skin heath, digestion, renal, sexual, or neurological function [3,57,58]. The continued success of this advice is evidenced by robust water bottle sales, which topped 2.78 billion dollars in 2018 within the United States alone [59]. At extreme levels (>5 L daily), social polydipsia may result in profound dilation of the bladder, ureters and kidneys [60] and at worst, water intoxication (i.e., overconsumption of fluids beyond excretion rates leading to the signs and symptoms of encephalopathy) [12]. Of note, updated (2017) guidelines put forth by the European Food Safety Authority (EFSA) now defines total water intake to include all beverages consumed plus the moisture contained in foods [61].
Drinking beyond the dictates of thirst has been popularized within athletic circles to prevent the detrimental effects of hypohydration on health and performance [11]. Although guidelines have evolved to drink to minimize body weight losses (<2%) [62], other drinking guidelines recommend drinking before the onset of thirst stimulation to maintain a dilute urine (urine specific gravity <1.020) [11]. Some athletes, unfortunately, have taken this advice to extreme levels (i.e., drinking 80–100 cups of fluid during a marathon footrace [63]) and have developed water intoxication [13,64]. Additionally, water loading has become a popular practice for combat sport athletes to enhance water weight losses before weigh-ins [42] while actors participating in pornographic films have begun water loading to enhance their squirting performance abilities [58]. The prevalence of symptomatic water intoxication in prolonged endurance races remains relatively rare (<1%), however [65].
Why otherwise healthy people, outside of sports or social reasons, habitually drink high volumes of fluid [66] above physiological need remains a curious and unanswered phenomenon. Studies performed in mice exposed to chronic stress [67,68] or raised in isolation [69,70], provide psychological insight into this peculiar finding. Male C57BL/6 mice subjected to chronic social defeat stress (i.e., exposure to bigger, meaner, “bully” mice) demonstrate a distinct phenotype characterized by enhanced fluid intake [67,70] and water retention [68]. Additionally, two-month old Sabra mice [70] and adolescent male Sprague-Dawley rats [69] reared (post-weaning) in isolation developed significant polydipsia compared with control animals. Follow-up molecular and electrophysiological studies implicate the mesolimbic dopamine circuit in the manifestation of polydipsia in response to loneliness and social anxiety [67].
One explanation as to why anxious mice develop polydipsia, is that water intake may somehow reduce dopaminergic neuron excitability within the ventral tegmental area (VTA), or the reward area, of the brain. Of note, schizophrenia has been linked to enhanced dopaminergic receptor excitability [67,71], which likely mediates polydipsia as either a reward-seeking [67] or anxiolytic [67,68,70] behavior. Further investigations on drug-induced polydipsia are required to tease out the potential neurochemical circuits linking dopamine, reward, and drinking. Drugs that demonstrate the most promising results, include: methamphetamines (which inhibit dopamine reuptake in the brain) [72] such as 3,4 methyldioxymethamphetamine (Ecstasy) [73], agonists, which downregulate dopamine receptor 2 (DRD2) [74], first and second generation antipsychotics [75], and antidepressant medications [76]. All these drugs have been linked to hyponatremia from non-osmotic AVP secretion, but their relationship to polydipsia is under-appreciated. Of note, a variety of drugs and excipients have been shown to affect hydration status by augmenting fluid losses, affecting thirst and/or appetite, increasing intestinal permeability and/or renal reabsorption rates [7].
Human observations corroborate these animal findings, as most psychogenic polydipsic patients report that drinking makes them feel better [77]. Patients with hallucinations also report that drinking fluids suppress the “voices” [78], further suggesting that the act of drinking activates neural circuits associated with primitive coping mechanisms [77]. Other investigators suggest that the anterior hippocampus and nucleus accumbens are involved in polydipsia as a reward-seeking behavior in psychiatric patients [77]. Alternatively, compulsive water drinking has been documented in non-neurotic individuals seeking to achieve a drunken-like state [14,55]. For example, a 16-year-old female drank copious amounts of water because it made her feel “funny and high, like after a beer” [55] while a 46-year-old man with a history of depression ran out of money to buy beer, so drank large amounts of water because it made him feel “slightly drunk” [14]. Therefore, coupled with evidence suggesting that drinking fluids improves cognition [10], it is possible that polydipsia activates a dopaminergic reward circuit that attenuates anxiety in susceptible individuals exposed to chronic stress and/or social isolation. A summary of this proposed relationship is detailed in Figure 1. Further investigation on the potential anxiolytic effects of polydipsia, especially in females, warrants further investigation with particular regards to whether this practice is adaptive or maladaptive over the long term.

Studies performed in mice and men collectively suggest that modest overhydration results in modest urine production (which matches fluid intake volumes) in homeostatic defense of plasma tonicity and intracellular size. In the chronic condition (>3 days) sustained AVP suppression results in the downregulation of AQP2 water channels within the kidney collecting duct, which results in a transient (3–5 days) inability to concentrate urine or reabsorb kidney water back into the circulation in response to AVP stimulation. Complications from acute (>3 L/h) or chronic (5–10+ L/day) water intakes at rest are uncommon but may result in acute water intoxication or chronic urinary tract abnormalities such as urinary bladder distention, ureter dilation, and hydronephrosis. Modest overhydration (>2 L/day in sedentary individuals of average size in temperate environments) may prevent kidney stones in individuals with recurrent nephrolithiasis or reduce the number of urinary tract infections in susceptible premenopausal females. The anxiolytic effects of copious water intake on a subset of vulnerable individuals, with or without mental illness, has been demonstrated along with data suggesting that overhydration enhances cognitive function. Further studies assessing the benefits and detriments of water intake above thirst are required, as long as water intakes are not extreme and warnings of the potentially fatal consequences of water intoxication are duly noted. 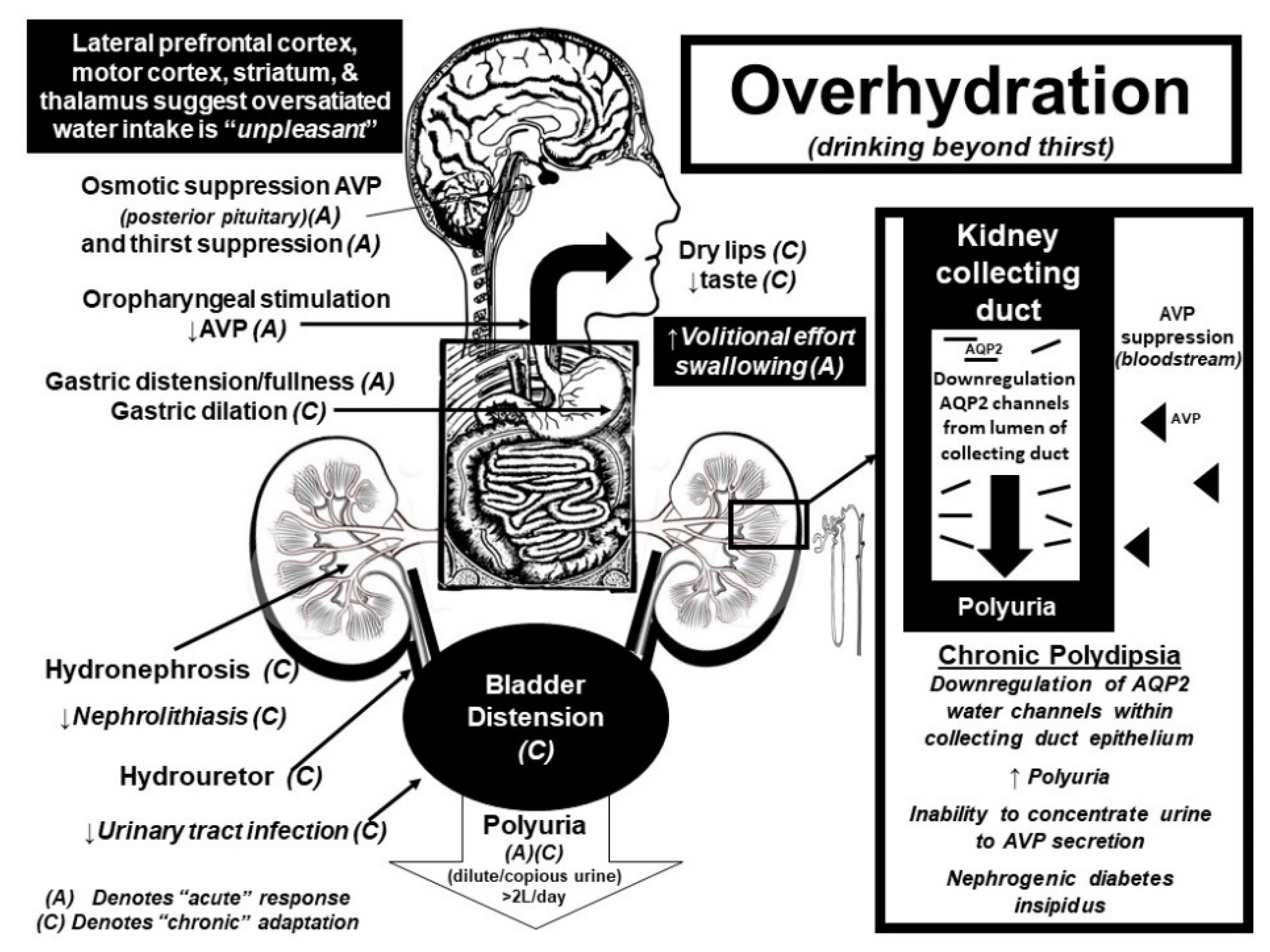