Allomyrina dichotoma larva is a nutritional-worthy future food resource and it contributes to multiple pharmacological functions. However, its antidiabetic effect and molecular mechanisms are not yet fully understood. Therefore, we investigated the hypolipidemic effect of A. dichotoma larva extract (ADLE) in a high-fat diet (HFD)-induced C57BL/6J mice model. Glucose tolerance and insulin sensitivity in HFD-induced diabetic mice significantly improved after ADLE administration for six weeks. The levels of serum triglyceride (TG), aspartate aminotransferase (AST), alanine transferase (ALT) activity, and lipid accumulation were increased in the liver of HFD-fed mice, but the levels were significantly reduced by the ADLE treatment. Moreover, hepatic fibrosis and inflammatory gene expression in the liver from HFD-treated mice were ameliorated by the ADLE treatment. Dephosphorylation of AMP-activated protein kinase (AMPK) by palmitate was inhibited in the ADLE treated HepG2 cells, and subsequently reduced expression of lipogenic genes, such as SREPBP-1c, ACC, and FAS were observed. The reduced expression of lipogenic genes and an increased phosphorylation of AMPK was also observed in the liver from diabetic mice treated with ADLE. In conclusion, ADLE ameliorates hyperlipidemia through inhibition of hepatic lipogenesis via activating the AMPK signaling pathway. These findings suggest that ADLE and its constituent bioactive compounds are valuable to prevent or treat hepatic insulin resistance in type 2 diabetes.
Keywords: Allomyrina dichotoma larva; hepatic insulin resistance; lipogenesis Allomyrina dichotoma larva; hepatic insulin resistance; lipogenesis

Nonalcoholic fatty liver disease (NAFLD), or fatty liver, is a chronic liver disease associated with hepatic dysfunction due to excessive triglyceride (TG) accumulation [1]. NAFLD is closely related to metabolic diseases, such as obesity, insulin resistance, hypertension, and dyslipidemia, and the incidence of NAFLD increases as obesity increases [2]. Abnormal dietary fat intake directly contributes to a casual role in hepatic lipid accumulation, such as TG, cholesterol, and lipid droplets in the cytoplasm of hepatocytes [3], and lipotoxicity that is caused by fat accumulation induces hepatic insulin resistance in the pathogenesis of type 2 diabetes [4].
The current drugs for treatment of NAFLD have considerable side effects, and their long-term treatment effect is not revealed and unsafe [5]. Therefore, an effective alternative to pharmacological therapy is needed, such as using natural products, which may be safe and beneficial in the treatment and prevention of NAFLD.
Recently, according to the Food and Agriculture Organization of the United Nations, edible insects have been reported to be possible future human dietary supplements because they are a rich source of unsaturated fatty acids, proteins, minerals, vitamins, and other nutrients [6,7,8]. Various insects have already been used as traditional food or folk remedies in many countries, however, their consumption has been restricted by the lack of scientific proof of positive effects and safety to humans. Allomyrina dichotoma, also known as “Jangsupungdaeng-i” in Korea, is a species of rhinoceros beetle that is widely used in traditional medicine for its anti-hepatofibrotic, antineoplastic, and antioxidant effects [9,10,11,12]. The component of pharmacological activity was established in beetle larva [11]. However, whether A. dichotoma larva extract (ADLE) can prevent fatty liver or improve hyperglycemia in high-fat diet (HFD)-induced type 2 diabetes has not yet been investigated. Therefore, we investigated the effect of diabetic and liver steatosis of ADLE in diabetic mice induced by HFD-fed mice model, and its molecular mechanisms in palmitate-treated HepG2 cells.

A. dichotoma larva were purchased from Yechun Bugs land (Yecheon-gun, Gyungsangbuk-do, Korea). The dried A. dichotoma larva were powdered by using a grinder and extracted with ethanol/water (70:30, v/v) at a ratio of 20 mL/g for 3 h at 60 °C thrice, followed by filtration twice through filter paper through No. 2 filter paper (Advantec Toyo Roshi Kaisha, Ltd., Tokyo, Japan). The filtrate was concentrated in a vacuum rotary evaporator (T < 40 °C), lyophilized, and dissolved in deionized water.

2.3. Preparation of Palmitate and MTT Assay

Four-week-old C57BL/6J male mice were obtained from the Korea Research Institute Bioscience & Biotechnology (KRIBB, Daejeon, Korea). The mice were allowed free access to standard chow diet and water for a week. The mice were maintained at an ambient temperature (23 °C) with 12:12 h light–dark cycles with free access to food and water. All animal procedures were approved by the Institution Animal Care and Use Committee at Eulji University (EUIACUC-18-7). After a week of adaptation, the mice were fed a high-fat diet (HFD) of 60% fat (D12492; Research Diets, New Brunswick, NJ, USA) for 6 weeks (n = 33). Aged-matched control mice were fed a normal-fat diet (NFD) of 4.5% fat (Purina) for the same period (n = 6). Six weeks after the HFD, blood glucose levels and body weight were checked, and the mice with blood glucose levels >200–250 mg/dL were used for experiments. Diabetic mice were treated orally with ADLE (100 mg/kg/day) or vehicle (distilled water) (daily for 6 weeks) as described previously [14,15]. Metformin (Cayman Chemical, MI, USA) was orally administered (100 mg/kg/day) for 6 weeks as a positive control. Body weight and food intake were recorded weekly, and blood glucose was measured every 2 weeks for the 6 week feeding period. The food efficiency ratio (FER) was calculated based on the formula: FER = body weight increased during experimental period (g)/total food intake during the experimental period (g).

2.7. Assessments of Liver TG and TC

The method for measuring the contents of lipids in the liver was as described by Folch et al. [18]. Briefly, the liver (20–40 mg) was homogenized in cold PBS. A homogenate of 0.2 mL was extracted with methanol/chloroform (1:2) and centrifuged at 2500× g for 10 min. An aliquot of the organic phase was collected, dried under nitrogen, and resuspended in Triton X-100/ethanol mixture (1:1, v/v). The liver TG and TC levels were determined using its quantification kits (Asan Pharm.). Data were normalized for differences in protein concentration in the liver extracts.

The results were presented as the mean and standard deviations (SDs). All statistical analyses were performed using SPSS 20.0 software (IBM SPSS V20.0.0 for Windows, IBM Co., Armonk, NY, USA). Significant differences among the groups were analyzed using the LSD comparisons test. Statistical significance was set up at p < 0.05.

The HFD was administered to C57BL/6J mice for six weeks to induce type 2 diabetes. Changes in body weight, food intake, and blood glucose level were measured both in the initial and final points (six weeks) (Table 2). After six weeks, the body weights of the HFD group significantly increased by 2.3-fold as compared with the NFD group (p < 0.001), whereas food intake decreased in the HFD group. The fasting blood glucose levels also increased in the HFD group as compared with the NFD group.

The glucose tolerance test (GTT) and ITT at six weeks after HFD with or without ADLE were performed to investigate whether ADLE reduced glucose resistance and insulin insensitivity in diabetic mice. Figure 2A shows that glucose tolerance was impaired in HFD-induced mice as compared with NFD mice, and it was improved in ADLE-treated mice. The incremental AUC in the HFD group was higher than that in the NFD group (p < 0.001), and ADLE treatment significantly decreased (p < 0.05, Figure 2A,B). Increased insulin tolerance by HFD was reduced by the ADLE treatment, and a significant decrease in AUC of ITT value was observed as compared with HFD (p < 0.05, Figure 2C,D).

To determine the effect of ADLE on the serum lipid profile in diabetic mice, we compared the levels of total cholesterol (TC), triglyceride (TG), high-density lipoprotein (HDL), and low-density lipoprotein (LDL) in HFD with or without the ADLE treatment. Serum levels of TC, HDL, and LDL in the HFD group were significantly increased as compared with the NFD group (p < 0.01 or p < 0.001), but no significant differences were observed between the HFD and the ADLE-treated HFD group. However, increased levels of TG in the HFD group was significantly reduced by the ADLE treatment (p < 0.05), and the effect was similar to that of the Met-treated group (Figure 3A). Subsequently, the enzyme activity of AST and ALT was measured to determine the effect of ADLE on hepatic function. Figure 3B shows that the increased level of AST and ALT by HFD was significantly decreased with the ADLE and Met treatments.

3.5. ADLE Reduced Hepatic Fibrosis and Expression of Inflammatory Genes in the Liver of HFD-Induced Diabetic Mice

Hepatic fibrosis and inflammation are important risk factor for the progression of NAFLD [19]. As ADLE showed anti-hepatofibrotic and anti-inflammatory activity [10,20], we checked whether ADLE can improve fibrosis and inflammation in the liver of HFD-fed mice. As shown in Figure 4A, hepatic steatosis demonstrating single large fat droplets in the cytoplasm of hepatocytes and ballooning of hepatocytes was clearly observed in the HFD-fed mice, but ADLE or Met treatment blocked the hepatic steatosis. Moreover perivenular/pericellular fibrosis and infiltration of inflammatory cells was detected in the HFD-fed mice and it was reduced by the ADLE and Met treatments (Figure 4A). The mRNA level of collagen, type 1, alpha 2 (Col1a2), which is one of the fibrotic genes, also increased in the liver lysate of HFD-fed mice and the level was reduced by ADLE-treated mice (p < 0.01, Figure 4B). Moreover, the ADLE treatment ameliorated the expression level of inflammatory genes such as monocyte chemoattractant protein 1 (MCP-1) and the tumor necrosis factor alpha (TNF-α) induced by HFD (p < 0.01 and p < 0.05, Figure 4C).

The HepG2 cells were treated with palmitate with or without ADLE to investigate the antilipogenic effect and molecular mechanisms of ADLE. When the cytotoxicity of ADLE in the HepG2 cells was checked, treatment with 0.1–0.5 mg/mL of extract for 24 h did not change the cell viability in contrast to a significant decrease in 1 mg/ml of extract treatment (Figure 6A). Therefore, 0.5 mg/mL ADLE was used. The HepG2 cells treated with palmitate have been commonly used to induce hepatic steatosis of NAFLD [21,22], and 500 μM palmitate was used [23]. When the intracellular TG level was observed, the ADLE ameliorated TG levels caused by 500 μM palmitate in HepG2 cells (p < 0.05, Figure 6B). The mRNA and protein levels of sterol regulatory element-binding protein (SREBP), fatty acid synthase (FAS) and acetyl-CoA carboxylase (ACC) were examined to determine whether lipogenic genes were involved in the decreased TG level by ADLE. Figure 6C shows that increased mRNA expressions of these genes by palmitate are decreased by the ADLE treatment. The protein expression levels were also upregulated by palmitate, and it was significantly reduced in the HepG2 cells following treatment with ADLE (Figure 6D). Because phosphorylation of AMP-activated protein kinase (AMPK) was reported to play a crucial role in hepatic lipid metabolism regulation [13], we examined the phosphorylation of AMPK in this condition. The basal expression of AMPK was not changed, but the phosphorylation of AMPK at Thr 172 (pAMPK) was decreased by palmitate, and it was ameliorated by the ADLE cotreatment (Figure 6E). Decreased pAMPK/AMPK ratio in the palmitate-treated HepG2 cells was also inhibited by the ADLE treatment (Figure 6E).

3.8. ADLE Reduced the Expression of Lipogenic Genes and Dephosphorylation of AMPK in the Liver of HFD-Induced Diabetic Mice

Because lipogenic genes and phosphorylation of AMPK were involved in the reduced lipid accumulation of the HepG2 cells treated with ADLE, this mechanism in the liver lysate of HFD-induced diabetic mice with or without ADLE was confirmed. Both mRNA and protein expression levels of SREBP, FAS, and ACC were increased in the liver of HFD, whereas, the NFD and ADLE treatments significantly inhibited these expressions (Figure 7A,B). Figure 7C shows that the pAMPK/AMPK ratios of the HFD group was significantly decreased as compared with those of the control group (p < 0.001), and it was recovered by the ADLE treatment (p < 0.01) (Figure 7C).

This study was supported by the Basic Science Research Program grant (NRF-2018R1C1B6000998) provided by the National Research Foundation of Korea (NRF), which is funded by the Ministry of Science, ICT and Future Planning, Korea Health Technology R & D Project through the Korea Health Industry Development Institute (KHIDI), funded by the Ministry of Health and Welfare, Republic of Korea (grant number: HI14C1135) and by a grant from Eulji University in 2019. 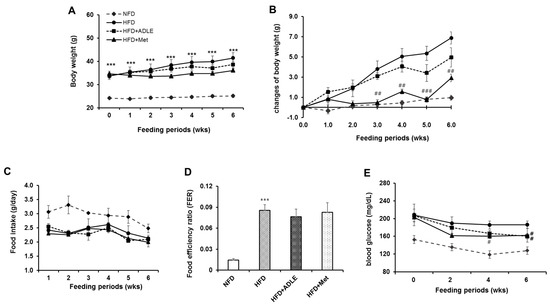 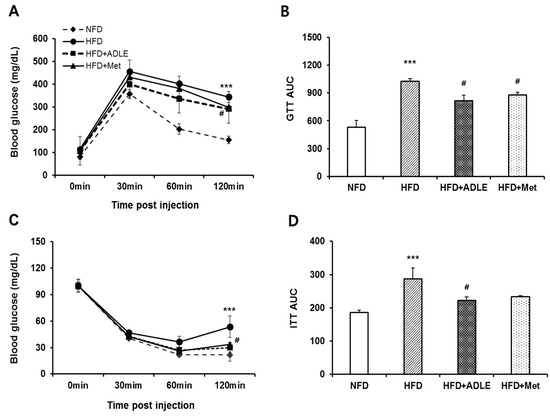 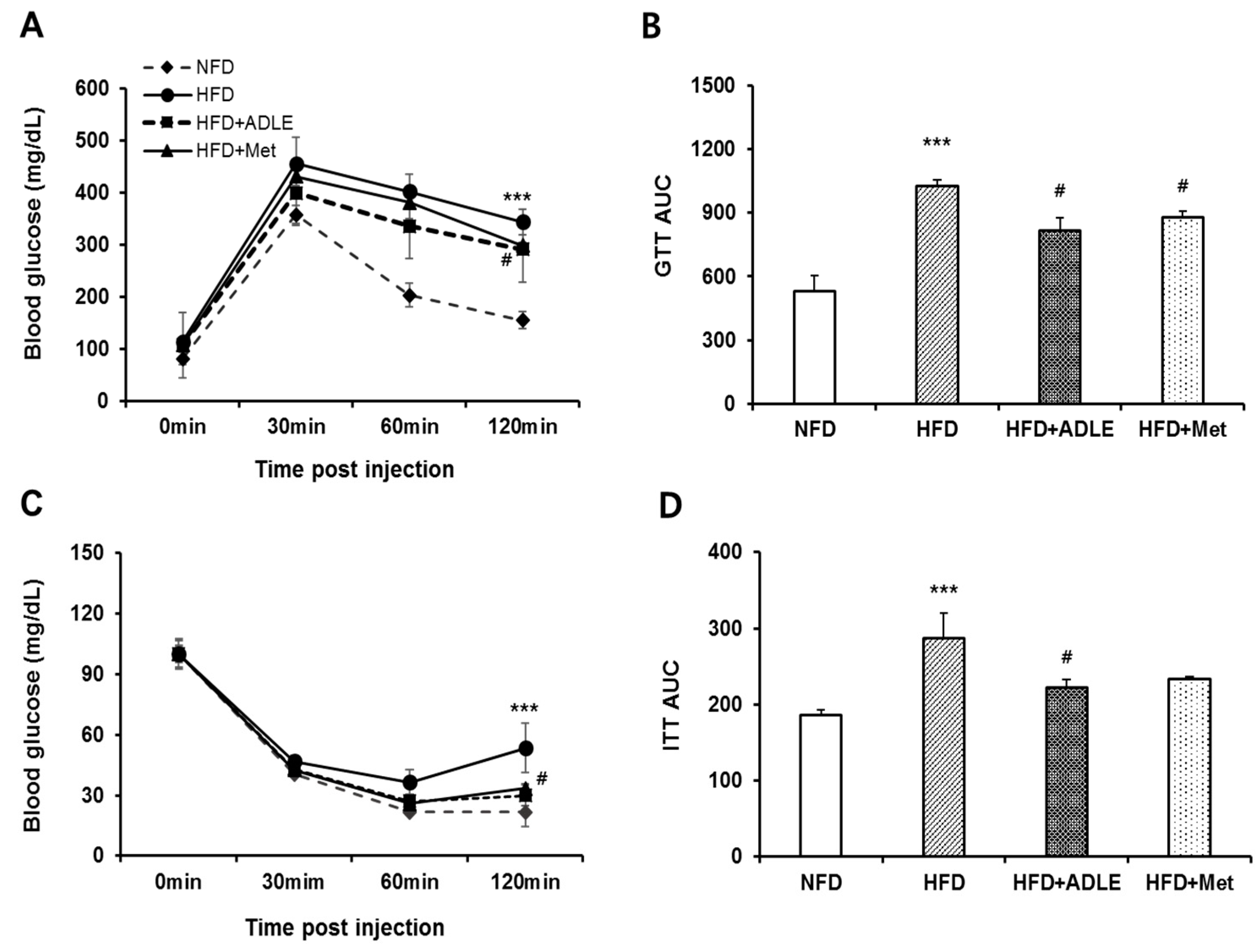 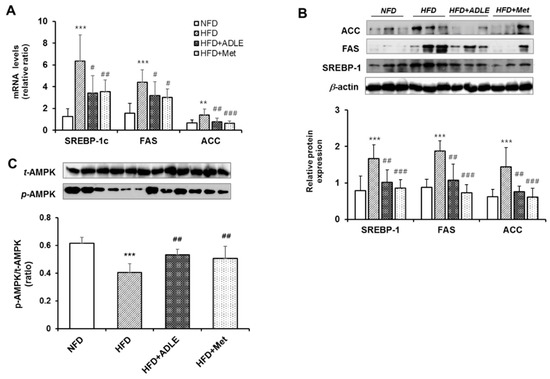 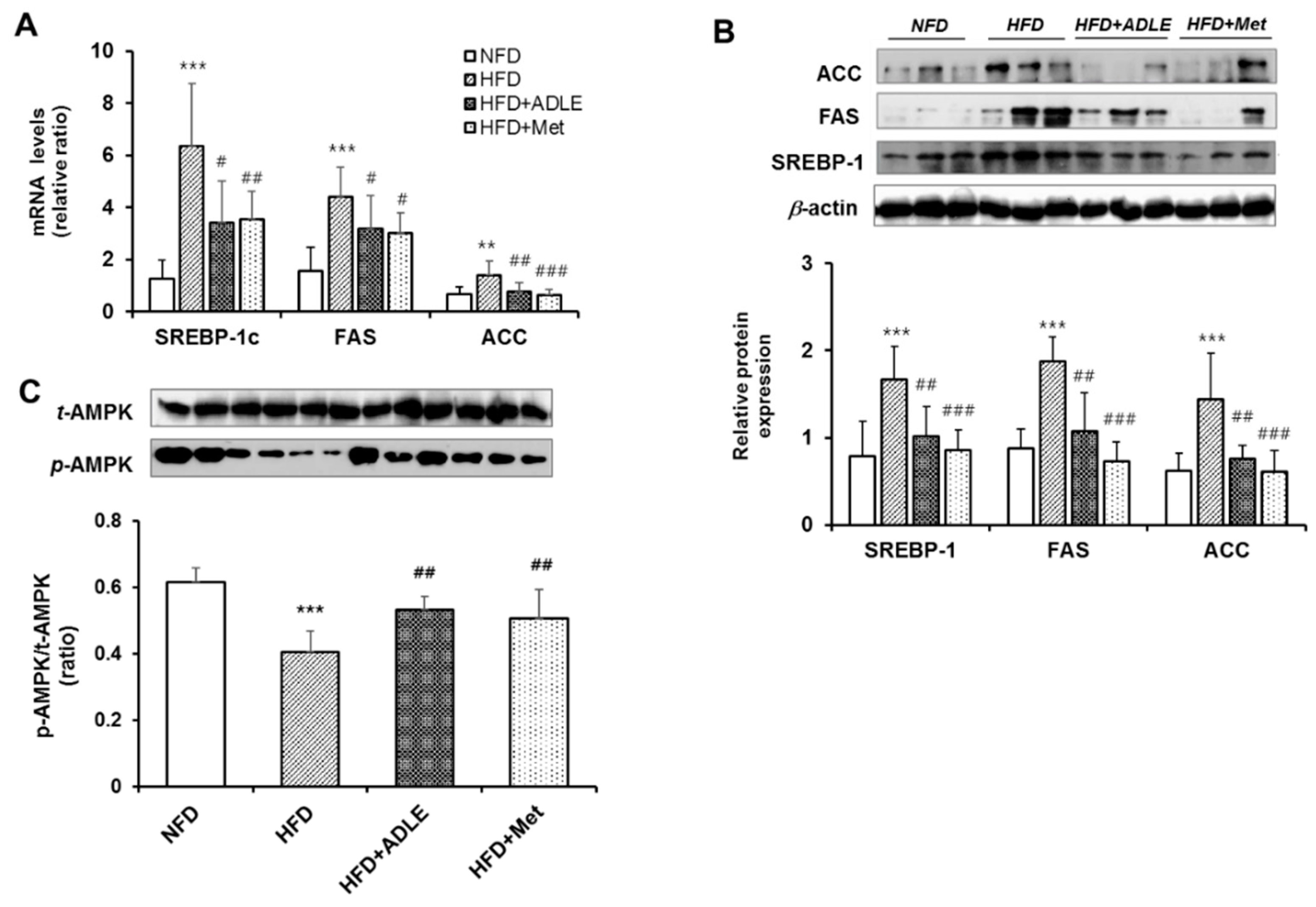