Fruit, Vegetable, and Fibre Intake among Finnish Preschoolers in Relation to Preschool-Level Facilitators and Barriers to Healthy Nutrition

Across Europe, excess body weight rates are particularly high among children and adolescents living in Southern European contexts. In Spain, current food policies appeal to voluntary self-regulation of the food industry and parents’ responsibility. However, there is no research (within Spain) assessing the food environment surrounding schools. We examined the association between neighborhood-level socioeconomic status (NSES) and the spatial access to an unhealthy food environment around schools using both counts and distance measures, across the city of Madrid. We conducted a cross-sectional study citywide (n = 2443 census tracts). In 2017, we identified all schools (n = 1321) and all food retailers offering unhealthy food and beverages surrounding them (n = 6530) using publicly available data. We examined both the counts of retailers (within 400 m) and the distance (in meters) from the schools to the closest retailer. We used multilevel regressions to model the association of neighborhood-level socioeconomic status (NSES) with both measures, adjusting both models for population density. Almost all schools (95%) were surrounded by unhealthy retailers within 400 m (median = 17 retailers; interquartile range = 8–34). After adjusting for population density, NSES remained inversely associated with unhealthy food availability. Schools located in low-NSES areas (two lowest quintiles) showed, on average, 29% (IRR (Incidence Rate Ratio) = 1.29; 95% CI (Confidence Interval) = 1.12, 1.50) and 62% (IRR = 1.62; 95% CI = 1.35, 1.95) more counts of unhealthy retailers compared with schools in middle-NSES areas (ref.). Schools in high-NSES areas were farther from unhealthy food sources than those schools located in middle-NSES areas (β = 0.35; 95% CI = 0.14, 0.47). Regulating the school food environment (within and beyond school boundaries) may be a promising direction to prevent and reduce childhood obesity. View Full-Text
Keywords: children; adolescents; schools; food environment; health inequalities; socioeconomic status; spatial exposure; Spain children; adolescents; schools; food environment; health inequalities; socioeconomic status; spatial exposure; Spain
►▼ Show Figures 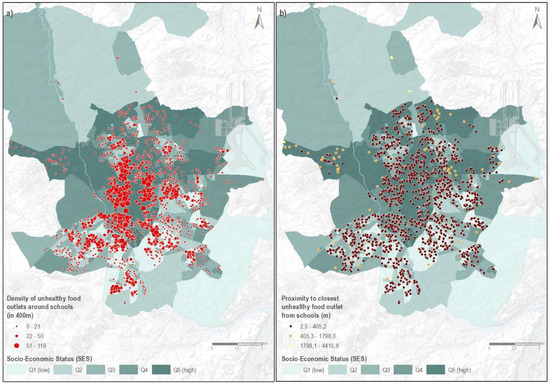