Fruits and vegetables are healthy foods but under-consumed among infants and children. Approaches to increase their intake are urgently needed. This study investigated the effects of a systematic introduction of taste portions and a novel protein-reduced complementary diet based on Nordic foods on fruit and vegetable intake, growth and iron status to 9 months of age. Healthy, term infants (n = 250) were recruited and randomly allocated to either a Nordic diet group (NG) or a conventional diet group (CG). Infants were solely breast- or formula-fed at study start. From 4 to 6 months of age, the NG followed a systematic taste portions schedule consisting of home-made purées of Nordic produce for 24 days. Subsequently, the NG was supplied with baby food products and recipes of homemade baby foods based on Nordic ingredients but with reduced protein content compared to the CG. The CG was advised to follow current Swedish recommendations on complementary foods. A total of 232 participants (93%) completed the study. The NG had significantly higher intake of fruits and vegetables than the CG at 9 months of age; 225 ± 109 g/day vs. 156 ± 77 g/day (p < 0.001), respectively. Energy intake was similar, but protein intake was significantly lower in the NG (−26%, p < 0.001) compared to the CG. This lower protein intake was compensated for by higher intake of carbohydrate from fruits and vegetables. No significant group differences in growth or iron status were observed. The intervention resulted in significantly higher consumption of fruits and vegetables in infants introduced to complementary foods based on Nordic ingredients. View Full-Text
Keywords: infant feeding; Nordic diet; eating behaviour; repeated exposure infant feeding; Nordic diet; eating behaviour; repeated exposure
►▼ Show Figures 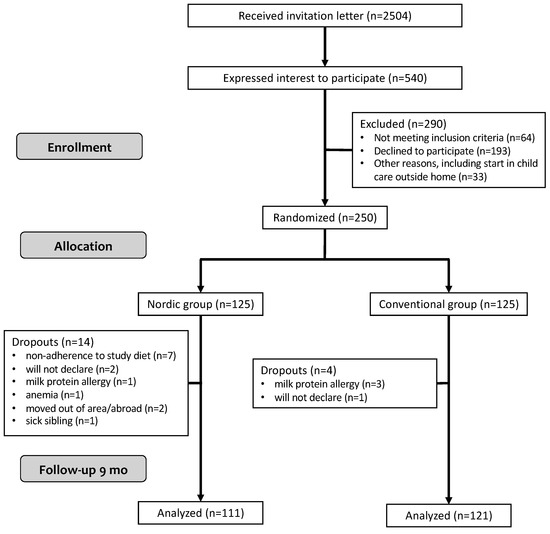