Background: In the treatment of obesity/metabolic syndrome, dietary measures traditionally focus on reducing carbohydrate/fat-related caloric intake. The possibility that changes in potassium consumption may be related to the achieved weight loss has not been previously explored. Methods: Sixty-eight participants, with a mean age of 51.6 ± 11.0 years (F/M—30/38), who fulfilled the ATPIII criteria for the metabolic syndrome (MS) were enrolled into a 1-year intensive multidisciplinary program. Nutritional recommendation consisted of a moderate low calorie/high protein Mediterranean diet. Baseline assessment included clinical and biochemical profiling, and body composition. Nutritional components were registered over 7 days before and at the end of 1 year of treatment. Results: Mean baseline body mass index (BMI) was 35 ± 4 kg/m², which declined by 9.4 ± 0.1% after one year of combined intervention. Linear stepwise regression analysis revealed that 45% of the predicted variance of the % decline in BMI was related to increased consumption of dietary potassium (β = −0.865) and caproic acid (β = −0.423) and reduction in the consumption of dietary vitamin B6 (β = 0.542), calcium (β = 0.335), total carbohydrates (β = 0.239) and total caloric intake (β = 0.238; p < 0.001). Notably, the strongest correlate of the decline in BMI was the increase in dietary potassium intake (β = −0.865). Subjects whose achieved decrease in BMI was above the average (n = 30) increased potassium intake by 25% as compared to an increase in dietary potassium intake of only 3% by those whose decline in BMI was below the average (n = 36; p < 0.05). The change in dietary potassium was related to the percent increase in dietary protein (r = 0.433; p < 0.001). Conclusion: An increase in dietary potassium consumption is a previously unrecognized predictor of the achieved reduction in BMI in a weight-loss-oriented multidisciplinary intervention in obesity/MS. Prospective trials are underway to confirm this post-hoc finding. View Full-Text
Keywords: dietary potassium; metabolic syndrome; weight loss dietary potassium; metabolic syndrome; weight loss
►▼ Show Figures 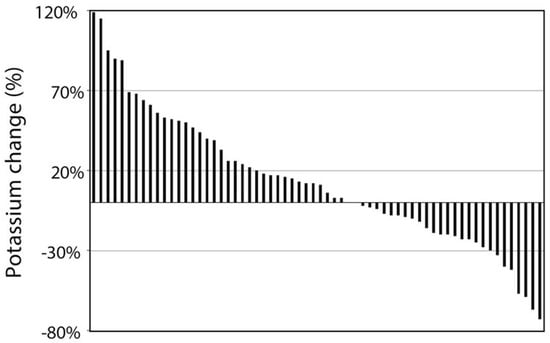