The purpose of this study was to examine if the short semi-quantitative food frequency questionnaire (FFQ) is a reliable and valid tool to assess the diet of Spanish children aged 7–9 years. We collected data from 156 children of the birth cohort INMA (Infancia y Medio Ambiente (Environment and Childhood)). Children’s parents or care-givers completed a 46-item FFQ on two occasions over a 9–12-month period about the children’s diet. To explore the reproducibility of the FFQ, the nutrient and food group intake collected from the both FFQs were compared, while validity was examined by contrasting the nutrient values from the FFQs and the average of three 24-hour dietary recalls (24hDRs) taken in this period, and also with the concentration of several vitamins in the blood (carotenoids, vitamin D and α-tocopherol). Pearson and de-attenuated correlation coefficients were calculated. The average correlation coefficients for nutrient intake’s reproducibility was 0.41, ranging from 0.25 (calcium) to 0.65 (β-carotene), and for food group intake was 0.45, ranging from 0.18 (cereals) to 0.68 (sweetened beverages). Correlation coefficients slightly improved when we compared energy-adjusted intakes. The average correlation coefficients for validity against 24hDRs was 0.34 for energy-adjusted intakes, and 0.39 when de-attenuation coefficients were used. The validity coefficients against the blood concentrations of vitamins were 0.38 for β-cryptoxanthin, 0.26 for lycopene, 0,23 for α-carotene and 0.15 for β-carotene, all of them statistically significant (p < 0.05). This study suggests that our brief FFQ is a suitable tool for the dietary assessment of a wide range of nutrients and food groups in children 7–9 years, despite the low to moderate reproducibility and validity observed for some nutrients. View Full-Text
Keywords: diet; nutrient intake; food frequency questionnaire; childhood; validity; 24-hour dietary recall; nutritional biomarker; reproducibility; Mediterranean country diet; nutrient intake; food frequency questionnaire; childhood; validity; 24-hour dietary recall; nutritional biomarker; reproducibility; Mediterranean country
►▼ Show Figures 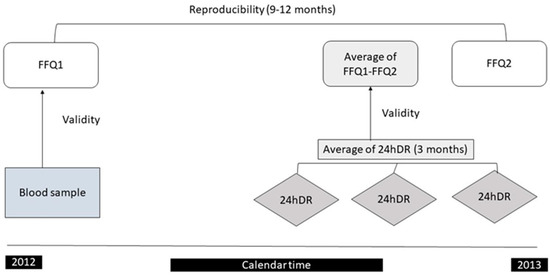