The Germ Fraction Inhibits Iron Bioavailability of Maize: Identification of an Approach to Enhance Maize Nutritional Quality via Processing and Breeding

Biotin Is Required for the Zinc Homeostasis in the Skin

Biotin is a water-soluble vitamin that serves as a co-enzyme for five carboxylases, namely, the covalently bound coenzyme for acetyl-CoA carboxylases 1 and 2, pyruvate carboxylase, propionyl-CoA carboxylase, and 3-methylcrotonyl-CoA carboxylase. These biotin-dependent carboxylases facilitate various metabolic reactions such as gluconeogenesis, fatty acid synthesis, and amino acid synthesis. Mammals cannot synthesize biotin by themselves; they obtain biotin through food and some gut microbiota produce biotin. Biotin deficiency (BnD) rarely occurs in people who consume a normal mixed diet [1,2]. However, genetic deficiency of holocarboxylase synthetase and biotinidase, continuous consumption of raw egg whites, parenteral nutrition, and modified milk without biotin supplementation could result in BnD [1,2,3]. Patients with BnD [4] are known to develop clinical symptoms that are similar to those in patients with acrodermatitis enteropathica (AE), which is caused by loss-of-function mutations in Zrt-, Irt-like protein (ZIP) 4 [5,6,7]. The clinical symptoms of AE include characteristic skin lesions, alopecia, and diarrhea.
Patients with AE exhibit severe zinc deficiency (ZnD) because their intestines lack the ability to absorb zinc. The characteristic skin lesions of AE occur in the periorificial, anogenital, and acral regions, which are exposed to the external environment. These lesions were caused by adenosine triphosphate (ATP)-mediated irritant contact dermatitis (ICD) [8,9,10]. Mice fed zinc-deficient (ZD) diet showed an impaired allergic contact dermatitis (ACD) in response to dinitrofluorobenzene (DNFB) compared to mice fed a zinc-adequate (ZA) diet. ZnD leads to impaired immune responses because of dysfunction in the immune cells. Thus, DNFB-mediated ACD is attenuated in ZD mice. However, ZD mice exhibited a significantly increased and prolonged ICD in response to croton oil (CrO) compared with ZA mice [8,9,10]. ATP is released from keratinocytes (KCs) in response to various environmental stimuli through lytic and non-lytic mechanisms, which results in ICD [11]. An ex vivo organ culture with CrO showed that the amount of ATP released from the skin of ZD mice was much greater than that released from the skin of ZA mice. Additionally, an injection of apyrase that hydrolyzes ATP into adenosine monophosphate (AMP) restored the increased and prolonged ICD caused by CrO application in ZD mice [8]. These results suggest that the prolonged ICD response in ZD mice was mediated via the excess ATP release by KCs in response to irritants.
Langerhans cells (LCs) are a subset of antigen-presenting cells that are distributed in the epidermis [12]. LCs but not KCs express CD39 (ecto-nucleoside triphosphate diphosphohydrolase 1; ENTPD-1) that potently hydrolyzes ATP into AMP [13,14,15], thereby assuming approximately 80% of the epidermal ATP hydrolysis [16]. Interestingly, epidermal LCs were absent in the skin lesions of patients with AE and of ZD mice [8,9,10]. The impaired ATP hydrolysis because of the disappearance of LCs leads to ATP-mediated inflammation in the epidermis, followed by the development of ICD. Therefore, the characteristic skin lesions in patients with AE are developed by aberrant ATP production from ZD–KCs and defective ATP hydrolysis due to loss of CD39-expressing LCs.
Patients with BnD show similar characteristic skin lesions as patients with AE. Thus, we hypothesized that skin lesions in BnD are caused by the same underlying mechanisms as those in ZnD.

Murine studies were conducted with the approval of and in accordance with the guidelines for animal experiments of the University of Yamanashi.

Five-week-old female BALB/c mice were purchased from Oriental Yeast Co. Ltd. (Tokyo, Japan). Mice were maintained under specific pathogen-free conditions throughout this study. Biotin-deficient (BD) and zinc-deficient (ZD) diets were purchased from CLEA Japan Inc (Tokyo, Japan). The mice were fed control (biotin-adequate; BA) or BD diet from 5 to 21 weeks of age. BA and BD diets were of almost the same nutritional quality, differing only in terms of biotin content. In another experiment (Figure 1B), the mice were fed ZD or control (zinc-adequate; ZA) diet from 5 to 11 weeks of age.

2.4. Quantification of Zinc Levels in the Serum

Skin specimens from the backs (Figure 1E) and ears (Figure 2E,F) of BA or BD mice were surgically removed, fixed in 4% paraformaldehyde overnight at 4 °C, and then dehydrated in 70% ethanol. Samples were embedded in paraffin. Sections were stained with hematoxylin and eosin.

2.8. Quantification of ATP Release from the Skin

Both ears from all the mice were taken immediately after sacrifice. Ear skins of the dorsal (back) side were used in the experiment. Ear skin explants were prepared by cutting into 8.0 mm circular pieces. The 2 pieces of ear skin were floated with the epidermis side upward in 12-well plates containing 4 mL PBS and incubated on ice for 10 min. Subsequently, 0.1% BAC was added to the culture. After 30 min, ATP concentrations in the supernatants were quantified using the luciferin-luciferase assay.

BnD causes abnormalities in the fatty acid composition of skin, such as accumulation of odd-chain fatty acids and abnormal metabolism of long-chain polyunsaturated fatty acids [4,23,24]. In this study, we found that dietary BnD leads to ZnD. However, the decline in the serum zinc levels in BD mice was relatively slower than that in ZD mice [8]. Accordingly, although changes in terms of the body weight and survival rate were similar to those observed in ZD mice, the kinetics in BD mice was slower than that in ZD mice [8]. LCs were found to be almost absent in the epidermis of BD mice, thereby leading to enhanced ATP production in skin, and similar findings were observed for ZD mice. This aberrant ATP accumulation in the skin results in the recruitment of neutrophils [25] and development of characteristic skin lesions in patients with ZnD and BnD. Indeed, decreased serum zinc levels have been reported in some patients with BnD [26,27,28]. On the other hand, some studies have demonstrated normal serum zinc levels in patients with BnD [29,30,31]. We speculate that this discrepancy might be attributable for the duration of BnD. Reduced serum biotin and zinc levels have been recently reported in patients with male androgenetic alopecia, suggesting the close association between biotin and zinc [32]. We investigated how dietary BnD led to ZnD but the precise mechanisms could not be elucidated (data not shown). Further analysis is required for elucidating the underlying mechanisms.
Three groups of molecules hydrolyze ATP, namely, ENTPDs, ectonucleotide pyrophosphatase/phosphodiesterases (ENPPs), and alkaline phosphatase (ALP) [33,34]. The latter two molecules are zinc-dependent molecules. Among ENTPDs and ENPPs, ENTPD-1 (CD39), -2, -3, and -8 and ENPP-1, -2, and -3 hydrolyze ATP [33]. LCs strongly express ENTPD-1 (CD39) and weakly express ENTPD-2 and ENPP-1, -2, and -3. KCs weakly express CD39, ENTPD-2 and -3, and ENPP-1 and -2 [16]. Neither LCs nor KCs express ENTPD-8 or ALP. Therefore, although LCs strongly express CD39, other ATP-hydrolyzing molecules are weakly expressed in both LCs and KCs. LCs occupy approximately 3% of the epidermis, whereas KCs occupy approximately 97%. Regardless of this numeric difference between LCs and KCs in the epidermis, LCs perform approximately 80% of epidermal ATP hydrolysis, whereas KCs perform the remaining 20% [16]. Additionally, ZnD impairs the activity of ENPPs [35]. KCs weakly express ENPP-1 and ENPP-2. This explains one underlying mechanism by which ZD–KCs and BD–KCs show increased ATP production.
Both ZnD and BnD result in disappearance of epidermal LCs. TGF-β knock out (KO) mice, Langerin-Cre TGF-β1fl/fl mice, Langerin-Cre TGF-βRIfl/fl mice, and Langerin-Cre TGF-βRIIfl/fl mice lack epidermal LCs [36], suggesting that although TGF-β is produced by both LCs and KCs, LC-derived autocrine and/or paracrine TGF-β is critical for LC development and survival. TGF-β is secreted as an inactive latency-associated peptide (LAP)-TGF-β. LAP-TGF-β is processed by integrin (ITG) αvβ6 and/or αvβ8 expressed on KCs but not on LCs, which convert LAP-TGF-β into active TGF-β [36,37]. Thus, ITGαvβ6 or αvβ8 KO mice show substantially reduced number of epidermal LCs [21,22]. In BD–KCs, the mRNA expression levels of TGF-β and ITGαvβ6 were significantly downregulated. As described above, LC-derived, but not KC-derived, TGF-β is critical for LC homeostasis. In this respect, it is unclear how much downregulated TGF-β mRNA expression in BD–KCs is involved in disappearance of epidermal LCs. On the other hand, LAP-TGF-β produced by LCs is not processed into active TGF-β, because of downregulated ITGαvβ6 expression in BD–KCs. This may be one of underlying mechanisms for the loss of epidermal LCs in BD mice.

In this study, we found that dietary BnD led to ZnD. BD mice lost epidermal LCs possibly due to impaired ITGαvβ6 expression in KCs, as seen in ZD mice. This resulted in ATP accumulation in the epidermis, thereby leading to the development of ATP-mediated ICD lesions in the skin. We concluded that the characteristic skin lesions in patients with AE and BnD have common underlying mechanisms, and biotin is required for zinc homeostasis in the skin. 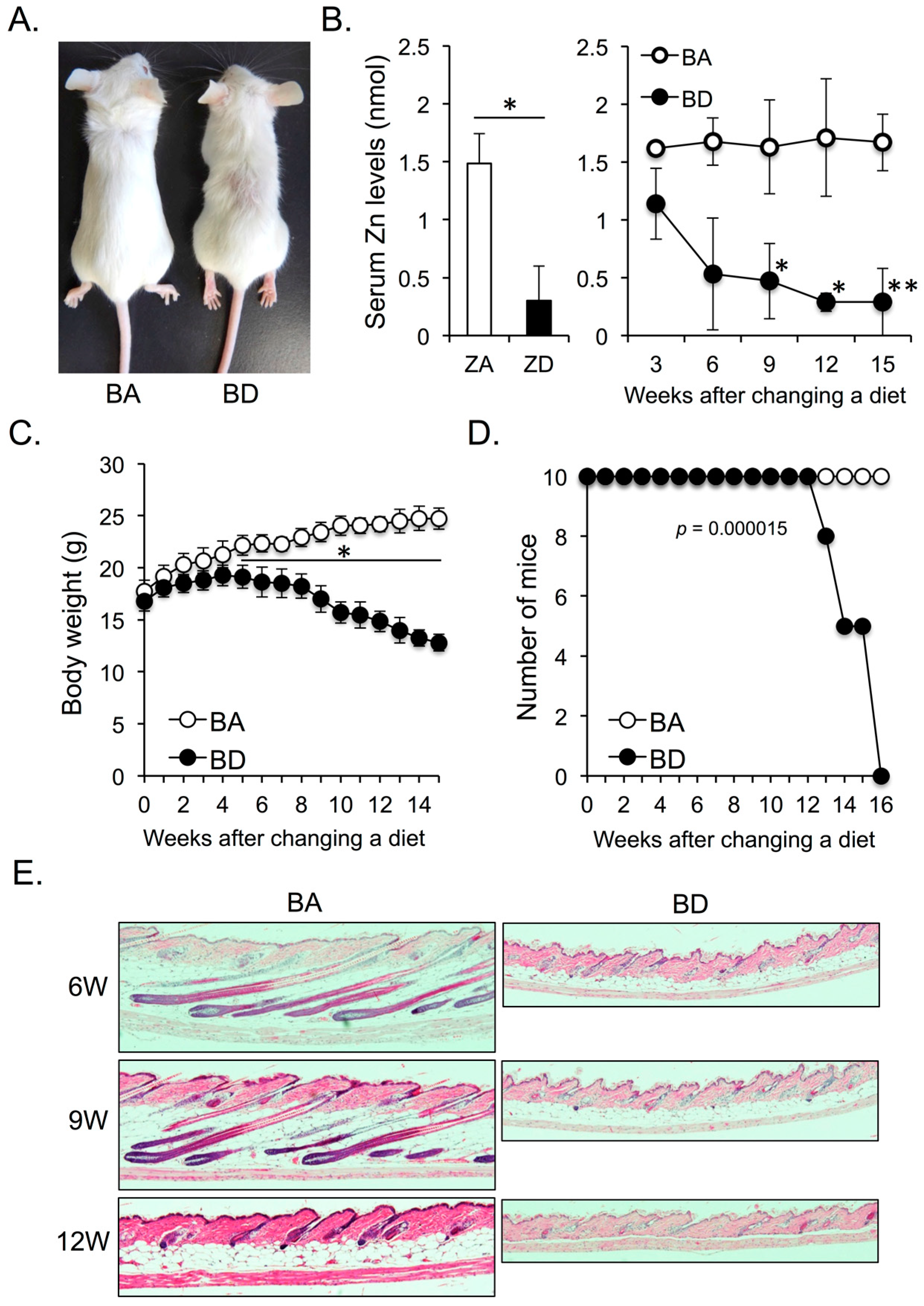