Non-communicable diseases are responsible for 63% of global deaths, with a higher burden in low- and middle-income countries. Hypertension is the leading cause of cardiovascular-disease-related deaths worldwide, and approximately 1.7 million deaths are directly attributable to excess salt intake annually. There has been little research conducted on the level of salt consumption amongst the population of Vanuatu. Based on data from other Pacific Island countries and knowledge of changing regional diets, it was predicted that salt intake would exceed the World Health Organization’s (WHO) recommended maximum of 5 g per day. The current study aimed to provide Vanuatu with a preliminary baseline assessment of population salt intake on Efate Island. A cross-sectional survey collected demographic, clinical, and urine data from participants aged 18 to 69 years in rural and urban communities on Efate Island in October 2016 and February 2017. Mean salt intake was determined to be 7.2 (SD 2.3) g/day from spot urine samples, and 5.9 (SD 3.6) g/day from 24-h urine samples, both of which exceed the WHO recommended maximum. Based on the spot urine samples, males had significantly higher salt intake than females (7.8 g compared to 6.5 g; p < 0.001) and almost 85% of the population consumed more than the WHO recommended maximum daily amount. A coordinated government strategy is recommended to reduce salt consumption, including fiscal policies, engagement with the food industry, and education and awareness-raising to promote behavior change. View Full-Text
Keywords: humans; sodium chloride; salt; Vanuatu; non-communicable diseases; prevention and control; nutrition policy humans; sodium chloride; salt; Vanuatu; non-communicable diseases; prevention and control; nutrition policy
►▼ Show Figures 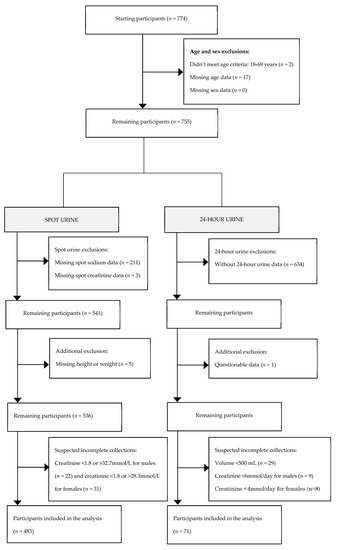