The relationship among dietary calcium, hypertension and vitamin D status currently remains unclear. This population-based cross-sectional study examined the association between dietary calcium intake and hypertension and the influence of serum concentrations of 25-hydroxyvitamin D [25(OH)D] in Japanese subjects. A total of 619 subjects aged from 40 years were recruited. Dietary intake was measured using a validated brief self-administered diet history questionnaire. Hypertension was defined as the use of antihypertensive medication or a blood pressure of 140/90 mmHg. Serum concentrations of 25(OH)D were used as the biomarker of vitamin D status. The prevalence of hypertension and low serum 25(OH)D levels (<20 ng/mL) were 55 and 32%, respectively. Dietary calcium intake inversely correlated with hypertension in subjects with serum 25(OH)D levels higher than 20 ng/mL (OR: 0.995; 95% CI: 0.991, 0.999) but it was not significant in those with serum 25(OH)D levels of 20 ng/mL or lower. Furthermore, dietary vitamin D intake correlated with serum concentrations of 25(OH)D after adjustments for various confounding factors. The present results demonstrate that the regular consumption of calcium may contribute to the prevention and treatment of hypertension in subjects with a non-vitamin D deficiency and also that dietary vitamin D intake may effectively prevents this deficiency.
Keywords: hypertension; calcium; vitamin D; 25-hydroxyvitamin D hypertension; calcium; vitamin D; 25-hydroxyvitamin D

Hypertension is one of the main risk factors for cardiovascular morbidity and mortality worldwide [1]. Lifestyle modifications are a key strategy for the prevention and treatment of hypertension. Previous studies have reported that several lifestyle habits, such as reduced sodium intake [2], weight loss [3], moderation in alcohol consumption [4] and increased physical activity [5], contribute to reducing blood pressure (BP).
Increases in calcium intake have been shown to lower BP in hypertensive and normotensive subjects. Dietary calcium interventions, such as supplementation or food fortification, were found to significantly reduce systolic blood pressure (SBP) and diastolic blood pressure (DBP) in normotensive subjects [6]. A meta-analysis of prospective cohort studies revealed that higher calcium intake from food and supplements is associated with lower risk of hypertension [7]. Calcium intake has been considered to have the effect of inhibiting the renin-angiotensin system and reducing the contractions of vascular smooth muscles cells [8,9]. Although the hypotensive effects of dietary calcium intake are weak, small reductions in BP are considered to have important health implications for cardiovascular diseases.
A close relationship exists between calcium and vitamin D. A sufficient vitamin D status promotes the intestinal calcium absorption and inhibits its excretion from the kidneys [10]. For example, osteoporosis, which is characterized by low bone mass and deterioration of bone tissue, is mainly associated with an inadequate calcium intake. However, an insufficient vitamin D status also contributes to osteoporosis due to the associated reductions in calcium absorption [11]. The relationship between vitamin D intake and BP has been examined but currently remains unclear [12,13].
To examine the association between dietary calcium and hypertension, it is important to consider the role of vitamin D. However, few studies have investigated this triangular relationship. A previous study reported that dietary calcium and dietary vitamin D were related to reductions in the risk of hypertension [14]. Dietary vitamin D intake and vitamin D from cutaneous synthesis reflect on serum concentrations of 25-hydroxyvitamin D [25(OH)D], which is the biomarker of vitamin D status [10]. Although serum 25(OH)D concentrations are inversely associated with hypertension [15,16], few population studies have been conducted on the association among dietary calcium intake, serum concentrations of 25(OH)D and hypertension.
Therefore, the present cross-sectional study aimed to examine the association among dietary calcium intake, hypertension and serum concentrations of 25(OH)D.

Comprehensive health examination data gathered between March 2014 and January 2016 from the residents of Shika town, Ishikawa Prefecture, a rural area in Japan, were used in the present cross-sectional study. These baseline data were derived from the SHIKA study, which is a longitudinal population-based observational study conducted to describe the health status of the population in a town model and investigate approaches to prevent life-related diseases, such as hypertension, diabetes, allergic diseases and liver diseases. This study population has been reported previously [17]. In brief, there were 22,314 residents in Shika town in March 2014, 18,839 of whom were middle-aged (40 years or older) [18]. The target subjects of the SHIKA study were all middle-aged residents who were legally residing in two specific elementary school districts and there were 2160 residents in these districts in March 2014. All subjects in the model districts (n = 2160) were delivered a self-administrated questionnaire by researchers, who explained the outline of the SHIKA study and the way to complete the questionnaire. The response rate of the questionnaire was approximately 92% (n = 1987). We recruited 837 voluntary subjects who underwent the comprehensive health examination.
The data of 787 subjects were available for the present study. To avoid under/overestimations leading to bias in the analysis of other nutrients, all subjects who reported a total energy intake of less than 600 kcal/day (half of the energy intake required for the lowest physical activity category) or more than 4000 kcal/day (1.5-fold the energy intake required for the moderate physical activity category) were excluded (n = 9). In addition, to weaken the influence of a treatment bias, subjects with diabetes, dyslipidaemia, cerebrovascular diseases and cardiovascular diseases were excluded (n = 159). Informed consent was obtained from all subjects. The present study was ultimately conducted on 619 subjects.

Nutrition status was assessed using a brief-type self-administered diet history questionnaire (BDHQ). BDHQ was a brief version of the diet history questionnaire and asked subjects about the consumption frequency of 58 food and beverage items. These items are commonly consumed in Japan and mainly from the food list used in the National Health and Nutrition Survey of Japan. BDHQ was developed in Japan for use in large-scale nutritional epidemiology studies. A previous study compared estimated energy and nutrient intakes calculated using BDHQ with 16-day dietary records in a Japanese population; the energy-adjusted intakes of 42 nutrients correlated with dietary records and Pearson’s correlation coefficients ranged between 0.45 and 0.61 in women and 0.41 and 0.63 in men [19]. Other studies have also confirmed the validity of BDHQ, which is considered to have a satisfactory ranking ability for many nutrients in Japanese subjects [20,21].

Serum concentrations of 25(OH)D were used as the biomarker of vitamin D status. Vitamin D obtained from food and sun exposure is biologically inert and undergoes hydroxylation twice for activation. Vitamin D is converted to 25(OH)D in the liver and 25(OH)D is then metabolized to the biologically active form of 1,25-dihidroxyvitamin D in the kidneys. Serum concentrations of 25(OH)D reflect vitamin D obtained from food and supplements as well as that synthesized in the skin and has a long circulating half-life of 15 days, while 1,25-dihidroxyvitamin D has a short half-life of 15 hours and is strictly regulated by calcium, phosphate and the parathyroid hormone [22].
Serum concentrations of 25(OH)D were measured using a radioimmunoassay (25-Hydroxyvitamin D 125I RIA Kit, DiaSorin Inc., Stillwater MN, USA). This method is based on an antibody with specificity to 25(OH)D and is considered to be extremely sensitive and specific [21]. According to the Institute of Medicine, serum concentration of 25(OH)D ≥20 ng/mL (50 nmol/L) is sufficient for maintaining bone health [10]. In the present study, low serum 25(OH)D concentration was defined as a 25(OH)D value of 20 ng/mL (50 nmol/L) or lower.

BP was measured in the comprehensive health examination for all subjects by well-trained nurses and clinical technologists, who were the staff of specialized medical check-up centres (ISHIKAWA HEALTH SERVICE ASSOCIATION, Ishikawa, Japan) and completed training courses on the BP measurement protocol. Subjects sat in a chair at rest and BP was measured twice consecutively using the right upper arm with a suitably sized cuff attached to UM-15P (Parama-tech Co., Ltd., Fukuoka, Japan) and HEM-907 (OMRON Co., Ltd., Kyoto, Japan), an automated digital sphygmomanometer based on the oscillometric method. Averages were adopted as BP data in the present study and hypertension was defined as a BP of 140/90 mmHg or higher. Subjects being treated with antihypertensive drugs were also included as hypertensive subjects.

Weight, height and waist circumference were measured and blood samples were taken in the comprehensive health examination for all subjects. Body mass index (BMI) was calculated as weight in kilograms divided by the square of height in meters.
Self-administered questionnaires were used to assess daily habits. The frequency of exercise was classified into two groups according to answers to the following questions: “Do you have a habit of exercise for more than 30 minutes at least two times a week for 1 year?” or “Do you habitually perform tasks such carrying baggage, walking and cleaning for more than 1 hour a day daily?” An exercise habit was defined by replying in the affirmative to either of these questions in the present study. Smoking habit was classified into two groups based on whether subjects were current smokers or not.

This study was conducted with the approval of the Ethics Committee of Kanazawa University. Written informed consent was obtained from all participants.

We performed a cross-sectional study with Japanese representatives to examine the association between dietary calcium intake and hypertension. High intake of calcium was inversely associated with hypertension in subjects with serum concentrations of 25(OH)D higher than 20 ng/mL. Furthermore, a correlation was observed between dietary vitamin D intake and serum concentrations of 25(OH)D. The regular dietary consumption of calcium may contribute to the prevention and treatment of hypertension in subjects with a non-vitamin D deficiency and dietary vitamin D intake represents one of the valid approaches for avoiding this deficiency.

This study was supported by Grant-in-Aid for Scientific Research (B) by the Ministry of Education, Culture, Sport, Science and Technology (MEXT), number 15H04783.

We would like to thank the staff of the Health and Welfare Center of Shika town; Satoru Kawabata, the chief of this section; and the staff of the Department of Environmental and Preventive Medicine, Kanazawa University Graduate School of Medicine. 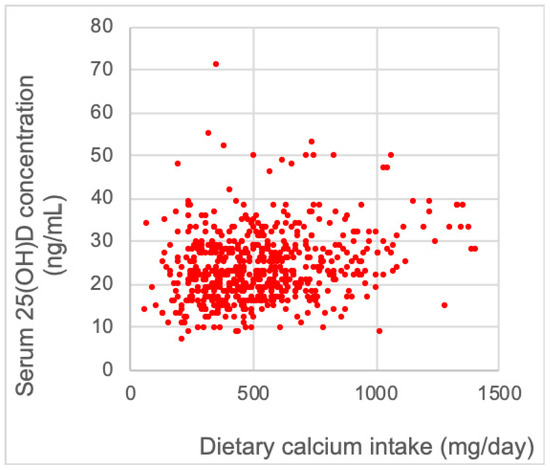 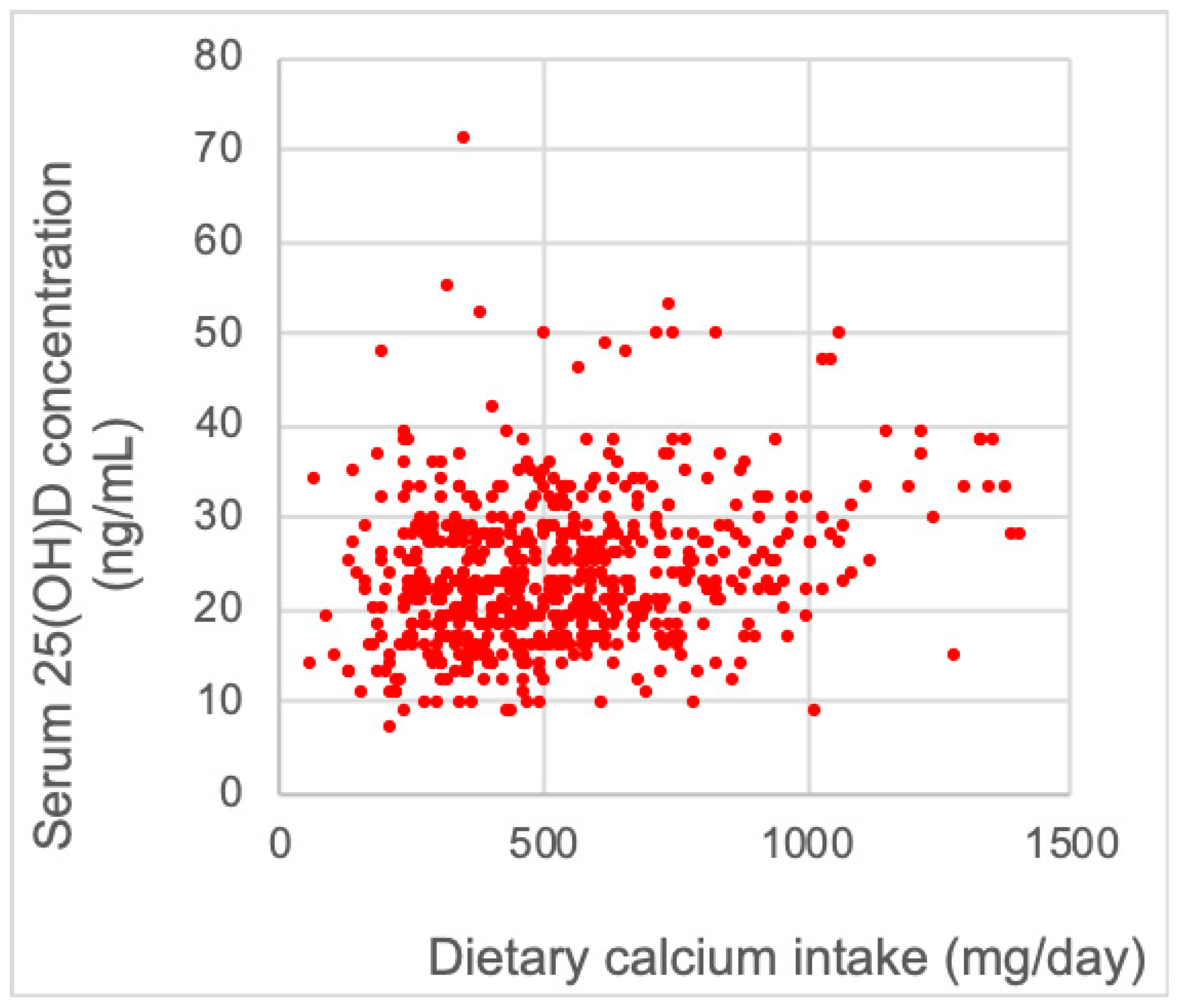