Antiproliferative Effects of Hop-derived Prenylflavonoids and Their Influence on the Efficacy of Oxaliplatine, 5-fluorouracil and Irinotecan in Human ColorectalC Cells

It is difficult to know if the cause for obesity is the type of sweetener, high fat (HF) content, or the combination of sweetener and fat. The purpose of the present work was to study different types of sweeteners; in particular, steviol glycosides (SG), glucose, fructose, sucrose, brown sugar, honey, SG + sucrose (SV), and sucralose on the functionality of the adipocyte. Male Wistar rats were fed for four months with different sweeteners or sweetener with HF added. Taste receptors T1R2 and T1R3 were differentially expressed in the tongue and intestine by sweeteners and HF. The combination of fat and sweetener showed an additive effect on circulating levels of GIP and GLP-1 except for honey, SG, and brown sugar. In adipose tissue, sucrose and sucralose stimulated TLR4, and c-Jun N-terminal (JNK). The combination of HF with sweeteners increased NFκB, with the exception of SG and honey. Honey kept the insulin signaling pathway active and the smallest adipocytes in white (WAT) and brown (BAT) adipose tissue and the highest expression of adiponectin, PPARγ, and UCP-1 in BAT. The addition of HF reduced mitochondrial branched-chain amino transferase (BCAT2) branched-chain keto acid dehydrogenase E1 (BCKDH) and increased branched chain amino acids (BCAA) levels by sucrose and sucralose. Our data suggests that the consumption of particular honey maintained functional adipocytes despite the consumption of a HF diet. View Full-Text
Keywords: adipose tissue; sweeteners; taste receptors; TLR4; BCAA; insulin signaling; incretins adipose tissue; sweeteners; taste receptors; TLR4; BCAA; insulin signaling; incretins
►▼ Show Figures 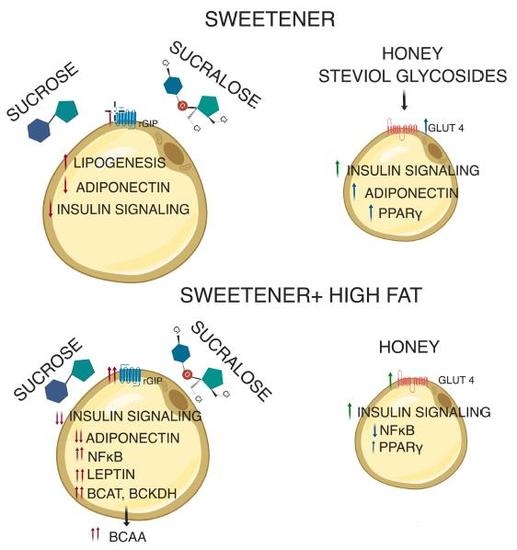