Awareness and Attitudes Regarding Industrial Food Fortification in Mongolia and Harbin

The use of iodine-biofortified vegetables may be a health alternative instead of iodine-biofortified salt for preventing iodine (I) deficiency and related human disorders. In this study, four Brassica genotypes (broccoli raab, curly kale, mizuna, red mustard) were hydroponically grown with three I-IO3− rates (0, 0.75 and 1.5 mg/L) to produce iodine-biofortified vegetables. Crop performances and quality traits were analyzed; iodine content was measured on raw, boiled, and steamed vegetables. The highest I rate generally increased I content in all Brassica genotypes, without plants toxicity effects in terms of reduced growth or morphological symptoms. After 21 day-iodine biofortification, the highest I content (49.5 µg/100 g Fresh Weight (FW)) was reached in broccoli raab shoots, while after 43 day-iodine biofortification, genotype differences were flattened and the highest I content (66 µg/100 g FW, on average) was obtained using 1.5 mg I-IO3/L. Nitrate content (ranging from 1800 to 4575 mg/kg FW) was generally higher with 0.75 mg I-IO3/L, although it depended on genotypes. Generally, boiling reduced iodine content, while steaming increased or left it unchanged, depending on genotypes. Applying low levels of I proved to be suitable, since it could contribute to the partial intake of the recommended dose of 150 µg/day: A serving size of 100 g may supply on average 24% of the recommended dose. Cooking method should be chosen in order to preserve and/or enhance the final I amount. View Full-Text
Keywords: curly kale; broccoli raab; mizuna; red mustard; cooked vegetables; steaming; boiling curly kale; broccoli raab; mizuna; red mustard; cooked vegetables; steaming; boiling
►▼ Show Figures 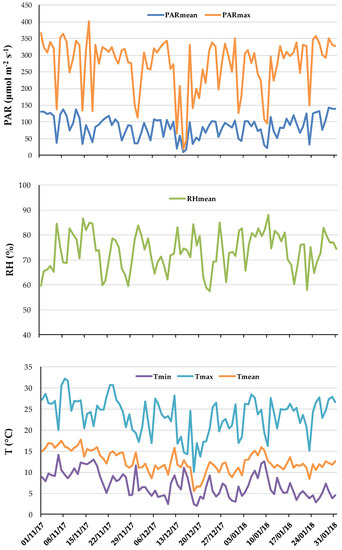