The Mediterranean diet (MD) is characterized by high consumption of fruits, vegetables, cereals, potatoes, poultry, beans, nuts, lean fish, dairy products, small quantities of red meat, moderate alcohol consumption, and olive oil. Most of these foods are rich sources of bioactive compounds which may play a role in the protection of oxidative stress including DNA damage. The present review provides a summary of the evidence deriving from human intervention studies aimed at evaluating the impact of Mediterranean diet on markers of DNA damage, DNA repair, and telomere length. The few results available show a general protective effect of MD alone, or in combination with bioactive-rich foods, on DNA damage. In particular, the studies reported a reduction in the levels of 8-hydroxy-2′–deoxyguanosine and a modulation of DNA repair gene expression and telomere length. In conclusion, despite the limited literature available, the results obtained seem to support the beneficial effects of MD dietary pattern in the protection against DNA damage susceptibility. However, further well-controlled interventions are desirable in order to confirm the results obtained and provide evidence-based conclusions.
Keywords: Mediterranean diet; DNA damage; DNA repair; telomere length; dietary intervention study Mediterranean diet; DNA damage; DNA repair; telomere length; dietary intervention study

Oxidative stress is a condition characterized by an imbalance between formation of reactive oxygen species (ROS) and antioxidant defense mechanisms. Overproduction of ROS can cause oxidative damage to lipids, proteins, and DNA [1]. The integrity and stability of DNA is essential to life and for the maintenance of normal cell functions. The most common types of stressors, apart from oxidative species, include chemical agents, ultraviolet/ionizing radiation, and xenobiotics that can contribute to DNA damage and to formation of base deamination, base alkylation, base dimerization, base oxidation, and single/double strand breakage [1]. The resulting DNA damage, if not properly repaired, can increase risk of mutagenesis and bring to the onset or the development of numerous degenerative diseases including cardiovascular diseases (CVDs), diabetes mellitus, Alzheimer’s disease, and cancer [2,3,4]. Chronic oxidative stress has also been reported as a critical mechanism involved in telomere shortening [5]. Telomeres consist of long stretches of TTAGGG-DNA repeats associated with specific proteins and located at the end of chromosomes. They are involved in the protection of chromosomic stability and have been recognized as potential biomarkers of biological aging [6].
Increasing evidence suggests the crucial role of dietary and lifestyle habits as determinants of DNA oxidative damage [7,8], DNA repair [9], and telomere length [10]. Bioactives and bioactive-rich foods can exert a protective effect against oxidative stress resulting in lower DNA damage. For instance, DNA damage protection has been observed in several human intervention studies following the consumption of tomato [11,12], broccoli [13,14], spinach [15,16], blueberry [17,18], orange juice [19,20], nuts [21,22], green tea [23,24], and coffee [25,26]. Most of these foods are present in the Mediterranean diet (MD) and represent a rich sources of bioactive compounds such as vitamins, carotenoids, glucosinolates, and polyphenols acting as antioxidants or activators of endogenous multiple defense systems [27,28]. In addition, food bioactives have been demonstrated to induce DNA repair activity and to help in maintaining telomere length [10].
The MD has been identified as a sustainable and healthy dietary pattern characterized by a high intake of vegetables, legumes, fruits and nuts, cereals, olive oil, a moderately high intake of fish, a low-to-moderate intake of dairy products, a low intake of meat and poultry, and a regular but moderate intake of alcohol, primarily in the form of wine and generally within meals [29,30]. The adherence to the MD has been recognized to have a favorable effect on blood pressure, insulin sensitivity, lipid profile, inflammation, and oxidative stress, with a consequent decreased risk of numerous non-communicable diseases such as CVDs, cancer, and related deaths [31,32,33]. The results of PREDIMED (PREvención con DIeta MEDiterránea), a multicenter, randomized, nutritional intervention trial carried out in Spain from 2003 to 2011, demonstrated the protective effect of the traditional MD against CVD in individuals at high cardiovascular risk [34,35,36,37].
The exact mechanisms by which MD exerts its protective effects are not yet completely understood since numerous aspects such as lifestyle and environmental factors, characterizing Mediterranean style, can be involved and may interact contributing to the health benefits observed. However, the intake of bioactive compounds with a direct and/or indirect antioxidant action could represent a plausible, even if not the unique, explanation for the apparent benefits. A specific target of this protection could be represented by the defense of DNA from oxidative damage. The present review summarizes the main findings derived from human intervention studies addressing the impact of the MD on DNA protection and telomere length.

PUBMED (http://www.ncbi.nlm.nih.gov/pubmed) and EMBASE (http://www.embase.com/) databases (updated December 2018) were searched to identify pertinent articles. The searches used the combination of the following terms: (Diet, Mediterranean OR Mediterranean diet OR diets, Mediterranean OR Mediterranean diets) AND (DNA damage OR DNA damages OR damage, DNA OR damages, DNA OR DNA injury OR DNA injuries OR injuries, DNA OR injury, DNA OR genotoxic stress OR genotoxic stresses OR stresses, genotoxic OR stress, genotoxic OR telomeric DNA damage OR telomere length). The retrieved papers were also screened for additional papers. The search strategy is summarized in Figure 1.
The search was limited to human intervention studies. No other specific restrictions for the selection of the studies have been used with the exception of the language. Only papers written in English have been considered. Two independent reviewers (MM and DM) conducted the literature search in the scientific databases and assessed and verified the eligibility of the studies based on the title and abstract. Disagreement between reviewers was resolved through consultation with a third independent reviewer (CDB) to reach a consensus.
Data extraction of the papers meeting the inclusion criteria was performed by two reviewers (MM and MT). The following information was reported: (1) first author name and year of publication; (2) the country where the study was performed; (3) study design; (4) subjects’ characteristics; (5) characteristics of the control group; (6) characteristics of the intervention group; (7) list of markers of DNA damage; and (8) main findings.

2.2. Risk of Bias in Individual Studies

Risk of bias in individual studies was assessed independently by two review authors (MM and DM) by considering the following components to produce the resulting scores: (1) Selection Bias—Sequence generation and allocation concealment; (2) Performance Bias—Blinding of participants and personnel; (3) Detection Bias—Blinding of outcome assessment; (4) Attrition Bias—Incomplete outcome data; (5) Reporting Bias—Selective reporting; and (6) Other Bias. Scores were assessed considering three potential bias risks: “Low risk of bias”, when the study presented the considered characteristics; “High risk of bias”, when the study did not fully highlight the considered characteristics; and “Unclear risk of bias”, when it was not possible to attribute one of the two other scores (“Low risk” or “High risk”) due to missing information. All disagreements were resolved by consensus with a third reviewer (CDB).

A total of 233 records were identified from PubMed and EMBASE database search. After removing 39 duplicate articles, 194 studies were screened and 182 excluded based on title or abstract. The full text of eligible studies (n = 12) was read; a total of four records were excluded because not of interest or pertinent. At the end of the selection process a total of 8 human intervention studies were included in the review [38,39,40,41,42,43,44,45].

The main characteristics of the studies included in the review are reported in Table 1. Six out of eight studies were conducted in Spain [39,40,41,42,44,45], one in New Zealand [38], and one in Chile [43]. The study population included males and females of different age (young, adults and older subjects), and with different characteristics: healthy subjects [39,41], individuals with high cardiovascular risk [44,45], metabolic syndrome [40], and prostate cancer [38]. All the studies showed a randomized controlled design with the exception of one non-randomized and non-controlled study [38]. The duration of the intervention varied from a minimum of 4 weeks [39,41,43] up to 5 years [44,45]. Most of the investigations did not analyze the effects of MD alone but in combination with olive oil [40,42], nuts [40], wine [43], or MD supplemented with coenzyme Q10 [39,41]. Among the various markers of DNA oxidative damage, 8-hydroxy-2′-deoxyguanosine (8-oxo-dG) was the main evaluated, followed by the expression of DNA repair genes and telomere length. Only one study quantified the levels of strand breaks and oxidatively-induced DNA damage in peripheral blood mononuclear cells (PBMCs) [38].

Risks of bias within individual studies are reported in Figures S1 and S2. On the whole, the results show an unclear risk of bias for most of the types of bias. The performance (blinding of participants and personnel) and the selection (i.e., random sequence generation) represent the highest risks of bias.

Undoubtedly, the MD represents a balanced and healthy dietary pattern associated with a reduced risk of major chronic diseases. However, the role of the MD in the modulation of DNA damage, as potential contributor in disease onset, is poorly investigated. Apart from PREDIMED, most of the studies did not focus on the role of the MD as such, but in combination with specific bioactives and/or bioactive-rich foods; thus, specific contributions are difficult to discern. Although preliminary, the papers reviewed seem to strengthen the hypothesis of a potential role of MD in the protection of DNA damage and in the modulation of DNA repair genes and telomere length. However, the studies show several limitations due to the numerous bias and confounding factors apparently present in the experimental designs. For these reasons, the results in the present review can represent a starting point for further well-controlled intervention studies targeted on the specific effects of traditional and/or revised MD pattern in the modulation of DNA damage. These studies will be useful to provide more evidence-based proof of MD protective activity and to reveal the molecular mechanisms at the base of the protection observed.

This work was supported by the European Cooperation for Science and Technology (CA COST Action CA15132, The comet assay as a human biomonitoring tool (hCOMET)). The authors are grateful for support granted by Ministero delle Politiche Agricole, Alimentari, Forestali e del Turismo (MIPAAFT) and the work was performed within the framework of the European Joint Programming Initiative “A Healthy Diet for a Healthy Life” (JPI HDHL) MaPLE. We thank Donato Angelino for its help in the management of risk of bias. 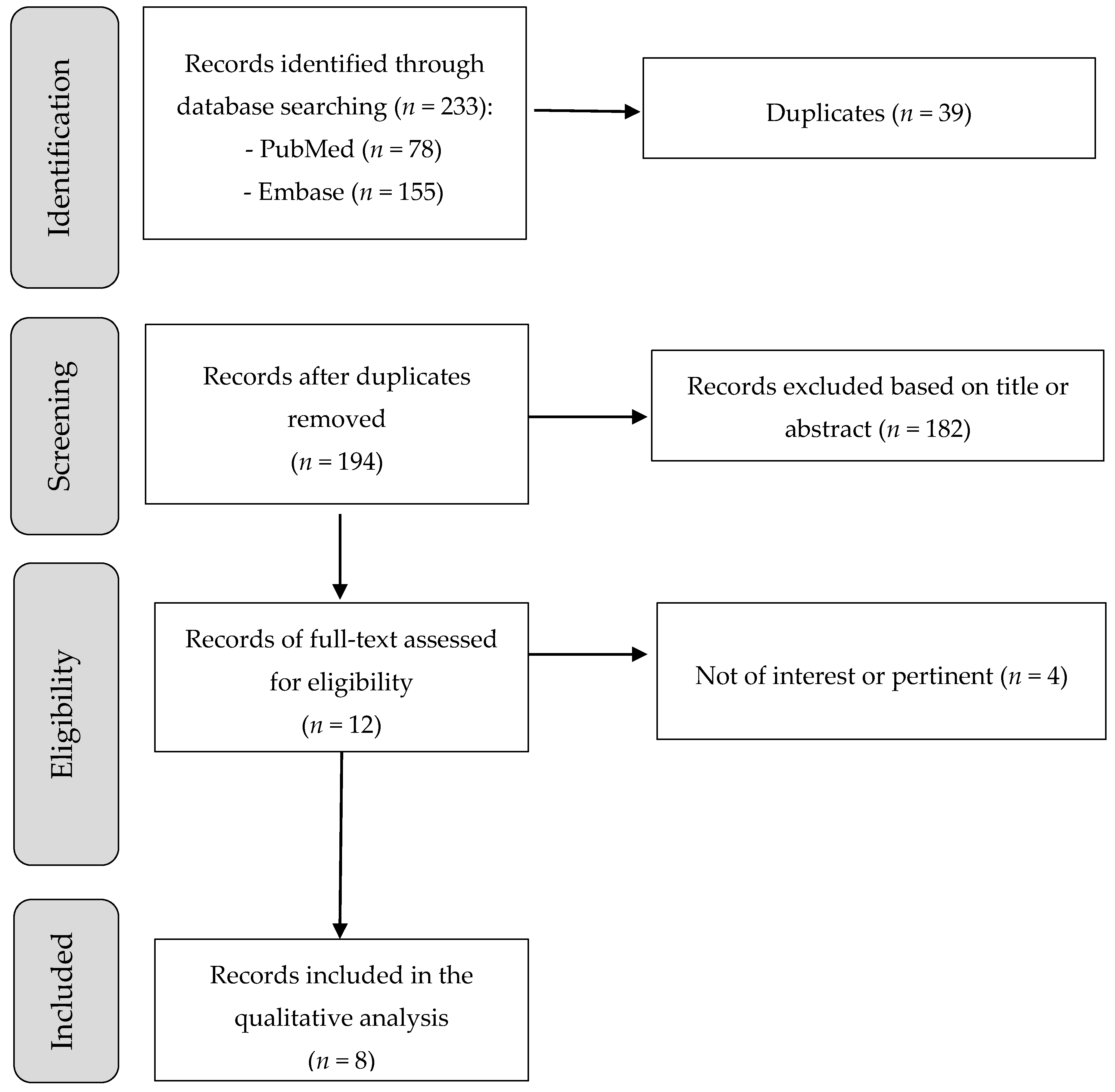