In the past decades, the human colon has come to light as a hub for microbial activities that impact many aspects of human health. The gut microbiota is composed of hundreds to thousands of species with biological activities including nutrient metabolism, vitamin synthesis, immune modulation, pro- and anti-microbial activities, and modulation of gut homeostasis [1]. Dysbiosis, or microbial imbalance, has been implicated in a number of chronic progressive conditions, one of which is obesity. More than 70% of adults in the United States are classified as overweight or obese; not only do these conditions threaten quality of life, but they also increase the risk of chronic diseases such as type 2 diabetes, heart disease, and stroke [2,3]. Evidence from animal and human studies indicates a role of the gut microbiota in body weight maintenance and development of obesity, although exact mechanisms remain unclear [4]. Marked differences in bacterial population have been seen in the microbiota of overweight/obese individuals when compared to normal weight individuals [5,6,7,8]. These findings implicate the gut microbiota as a potential target of nutritional therapies to prevent/reduce weight gain and obesity.
While most food consumed is digested and absorbed in the stomach and small intestine, complex carbohydrates such as resistant starch and fiber reach the colon where they are utilized by the gut microbiota [9]. These compounds are fermented by certain species to produce short-chain fatty acids (SCFA) which have numerous health implications including body weight maintenance [8,10,11,12]. Prebiotics were previously defined as “selectively fermented ingredient(s) that result in specific changes in the composition and/or activity of the gastrointestinal microbiota, thus conferring benefit(s) upon host health” and the compounds that fit these criteria were limited to mainly inulin, galactooligosaccharides (GOS), and fructooligosaccharides (FOS) [13]. In 2017 however, prebiotics were redefined as “a substrate that is selectively utilized by host microorganisms conferring a health benefit” [14]. This new definition may allow for inclusion of non-carbohydrate foods that do not undergo fermentation but are utilized by beneficial species in the gut, thus enhancing their expansion and positive health benefits. Such compounds include polyphenols.
Polyphenols are biologically active compounds produced by metabolic pathways in plants, with numerous roles including pathogen protection, antimicrobial, and antioxidant activities [15]. Most polyphenols consumed by humans are polymerized and/or glycosylate. These high molecular weight compounds reach the colon where they are broken down by the gut microbiota to smaller, absorbable compounds [16]. Grain sorghum (Sorghum bicolor L. Moench) commonly called sorghum, is the world’s fifth highly produced cereal crop, far behind the top four (rice, corn, wheat, and barley) but commonly grown in specific areas. Sorghum contains various classes of polyphenols, which are in the bran fraction [17]. The polyphenol composition of sorghum bran varies with its color, with sumac varieties rich in proanthocyanidins and black varieties rich in 3-deoxyanthocyanins, which include luteolinidin and apigeninidin [18]. Though previous studies have identified positive modulatory effects of polyphenols from polyphenol-rich foods on the human gut microbiota [19,20,21,22,23,24], to our knowledge no research has been conducted with sorghum polyphenol extracts. The objectives of this research were to characterize the major polyphenol components of two sorghum brans, and to evaluate the change of gut microbiota composition and the effect on SCFA production in response to sorghum bran polyphenols in fecal samples from normal weight (NW) and overweight/obese (OO) subjects.

Polyphenol extractions were performed according to Awika et al. [18] with modifications. Defatted sorghum bran samples (5 g) and extracting solvent (1% HCl in 70% methanol) were mixed at a ratio of 1:60. Mixtures were stirred at room temperature for 2 h and filtered through Whatman No. 42 filter paper (GE Healthcare, Amersham, UK). Solvent was removed using rotary evaporation at 30 °C and the aqueous filtrate applied to a pre-activated C-18 solid phase extraction (SPE) column (Grace Davidson Discovery Sciences, Deerfield, IL, USA). Sugars were eluted with 100 mL of water and discarded; then the remaining polyphenols were eluted with 100 mL of methanol. After elution of polyphenols, 50 mL of deionized water were then added to methanolic extract and methanol was removed through rotary evaporation at 30 °C. The concentrated aqueous extract was then frozen and subsequently lyophilized in a VirTis Benchtop SLC freeze dryer (SP Industries, Warminster, PA, USA). Resulting powdered polyphenol extracts, black sorghum bran extract (BSE), and sumac sorghum bran extract (SSE), were then pooled and stored in a desiccator at −4 °C until further analysis. Dried polyphenol extracts were used as substrates in the in vitro fecal fermentation experiment.

Total polyphenol content of sorghum bran extracts (BSE and SSE) was determined using the Folin–Ciocalteu assay according to Singleton and Rossi [25] with minor modifications. Standards were prepared using gallic acid in concentrations of 3.125, 6.25, 12.5, 25, 50, and 100 μg/g. BSE and SSE were dissolved for a dilution of 8000-fold. In a 48-well plate, 0.1 mL sample or standard, 0.5 mL of 0.2 N Folin–Ciocalteu’s reagent, and 0.4 mL of 7.5% Na2CO3 were combined. The plate was incubated at room temperature for 2 h and the absorbance at 760 nm was determined in a Synergy TT microplate reader (BioTek Instruments, Winooski, VT, USA). All samples and standards were measured in triplicate. Concentration was determined by plotting against a gallic acid standard curve and results were thus expressed in gallic acid equivalents (GAE).
Total proanthocyanidin content was determined using the 4-dimethylaminocinnamaldehyde (DMAC) assay [26]. Standards were prepared using catechin and ethanol (95%) at concentrations of 0.125, 6.25, 12.5, 25, 50, and 100 μg/g. In a 48-well plate, 0.15 mL of sample (BSE and SSE in ethanol for a dilution of 8000-fold) or standard and 0.75 mL of 5.7 N DMAC solution were combined, all in at least triplicate. Plates were read immediately at 640 nm in microplate reader. Concentration was determined by plotting against a catechin standard curve and expressed in catechin equivalents.
For quantitative analysis of 3-deoxyanthocyanins (3-DXA) a Beckman Coulter (Fullerton, CA, USA) System Gold HPLC system was used. The system was equipped with a 126 pump, a 168 Detector, and a 508 autosampler. The software used for data collection and integration was 32 Karat 8. A 250 × 4.6 mm i.d. C18 column (YMC America Inc, Allentown, PA, USA) was used for separation of 3-DXA in sorghum and standards. The mobile phase consisted of A: 5% formic acid in water, and B: 100% methanol. Flow rate was 1 mL min−1 and injection volume was 30 µL. The mobile phase gradient of Cho et al. [27] was used, with minor modifications: 0–60 min: 2–60% B, 60–61 min: 60–2% B, 61–66 min: 2% B, 66–75 min: 2–0% B. Wavelengths monitored were 280, 340, and 480 nm. Apigeninidin and luteolinidin were identified and quantified using standard curves.
Antioxidant properties were determined using the free radical 2,2- diphenyl-1-picrylhydrazyl (DPPH) assay according to Brand-Williams et al. [28]. DPPH solution was prepared by dissolving in methanol (0.15 mM) and stored at −20 °C between uses. Serial dilutions of BSE and SSE (1–140 ppm) were prepared in methanol. DPPH solution (0.95 mL) was added to 0.05 mL extracts of varying concentrations and shaken. Plates were read in microplate reader at 30 min at 517 nm. Effective concentration to reduce the radical by 50% (EC50) was determined for both bran extracts and reported as µg gallic acid equivalents per gram. All samples and standards were plated in at least triplicate.

Short-chain fatty acids (SCFA) content was determined for all samples at all time point using the method of Bourquin et al. [30] with modification. After thawing at room temperature, 450 µL of samples were combined with 50 µL of a prepared solution containing 50 g meta-phosphoric acid and 1.6 g CuSO4/L, and 314.6 μL 4-methyl valeric acid (internal standard). After incubation at room temperature for 10 min, the mixture was centrifuged at 11,500 rpm for 5 min and the supernatant collected for analysis. SCFA analysis was performed using a Varian CP-3800 GC (Agilent, Santa Clara, CA, USA) with a CP-8400 autosampler and a HP-FFAP (High Polarity for the analysis of Free Fatty Acids and Phenols) modified polyethylene glycol (25 m × 32 mm) column. One µL of sample was injected with a split of 30:1 and a flow rate of 1.3 mL/min. The gradient used was 3 °C/min from 65 °C to 110 °C and 8 °C/min until 150 °C. Total and individual SCFA were quantified against reference standards for butyric acid (BA), propionic acid (PA), and acetic acid (AA).

Each of the 22 subjects received all six treatments (NC, FOS, BSE, SSE, FOS + BSE, FOS + SSE). Therefore, the statistical analysis was performed for the randomized complete block design (RCB), in which the effect of six treatments was tested with subjects as blocks. We note that the analysis of variance (ANOVA) approach for RCB seriously violated the assumptions of normality and equal variance in our diagnostic procedures. Alternatively, Friedman test was used, known as a distribution-free rank sum test for RCB, followed by pairwise comparisons among six treatments at different time points: 6, 12, 18, 24 h for SCFA data and 0, 24 h for microbiota data, respectively. The time effect (0 vs. 24 h) was tested using a Wilcoxon signed rank sum test, as an alternative to a paired t-test, if there was a significant increase/decrease in relative abundance among 22 subjects. The effect of weight class (NW vs. OO with 11 subjects each) was tested using a Mann–Whitney test, as an alternative to two-sample t-test, under different treatments. All tests were nonparametric to avoid any controversial assumption for small sample size. The false discovery rate adjustment for the p-value was conducted as appropriate. Non-metric multidimensional scaling (NMDS) was utilized to analyze similarities in bacterial communities between treatments. PAST 3.15 was used for NMDS and analysis of similarities (ANOSIM) according to the Bray–Curtis index. The statistical results were reported at 0.05 or 0.01 levels of significance. All data analyses were conducted using statistical software SPSS (IBM, Armonk, NY, USA) and R version 3.3.3 (R core Team, Vienna, Austria).

3.3. General Changes in the Microbiota

After DNA extraction and sequencing of 264 samples, a total of 5,062,231 high quality reads were obtained for analysis of microbial populations. Overall distribution of microbiota, the comparison between NW and OO, and a change between time point 0 h and 24 h are shown in Figure 2. At the phylum level, the fermentation was dominated by Bacteroidetes, in which we observed a significant drop over the past 24 h, a significant difference between NW and OO at 24 h, and an insignificant difference between NW and OO at 0 h under no treatment (negative control, bottom left panel). A similar interpretation is possible for all microbiota in both phylum and genera. This analysis narrows down our focus on certain microbiota, and shows how we stratified the situations for weight class and time effect to be tested. The results for all microbiota are summarized in Table 3 and Table 4.
Non-metric multidimensional scaling (NMDS) plots revealed no differences in bacterial communities between treatments at time point 0 (Figure 3A), however after 24 h a clear separation was seen between the NC and FOS-containing treatments (p < 0.05) (Figure 3B). Sorghum extracts alone did not significantly impact bacterial communities compared to the negative control.

Black and sumac sorghum brans are significant sources of polyphenols with diverse polyphenol profiles. Although sorghum extracts did not significantly influence SCFA production from FOS, they enhanced proliferation of Prevotella and the butyrate-producing genus Roseburia. Combined sorghum polyphenols and FOS worked to enhance Bifidobacterium and especially Lactobacillus, a probiotic genus that has been difficult to stimulate through prebiotic supplementation. We observed differential responses to treatment in NW and OO microbiota for Prevotella, Bifidobacterium, and Roseburia, supporting the theory that gut microbial metabolism is altered in OO. Our results indicate that sorghum bran polyphenols may help modulate gut microbial populations, especially in concert with other prebiotic substances such as FOS. Further research is needed to determine which individual polyphenol compound is responsible for beneficial effects on the gut microbiota and to understand the mechanism by which the microbial strains respond to polyphenols.

S.-O.L. conceived the research project and designed the study; D.A. performed the data collection, laboratory analysis, and wrote manuscript; D.M. and C.B. analyzed the data; J.A.L. and F.C. participated in data analysis and validation. All authors reviewed and edited the manuscript.

This research was supported by Arkansas Corn and Grain Sorghum Board. 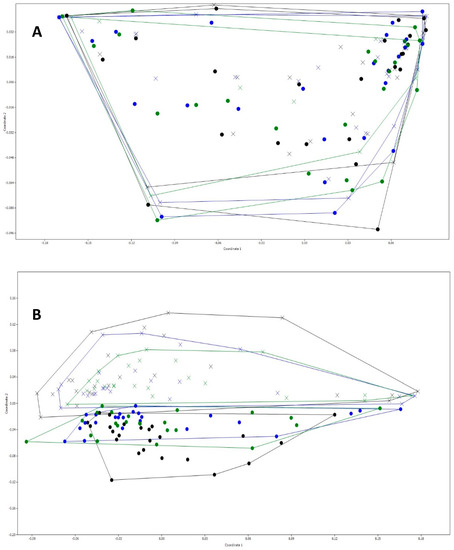 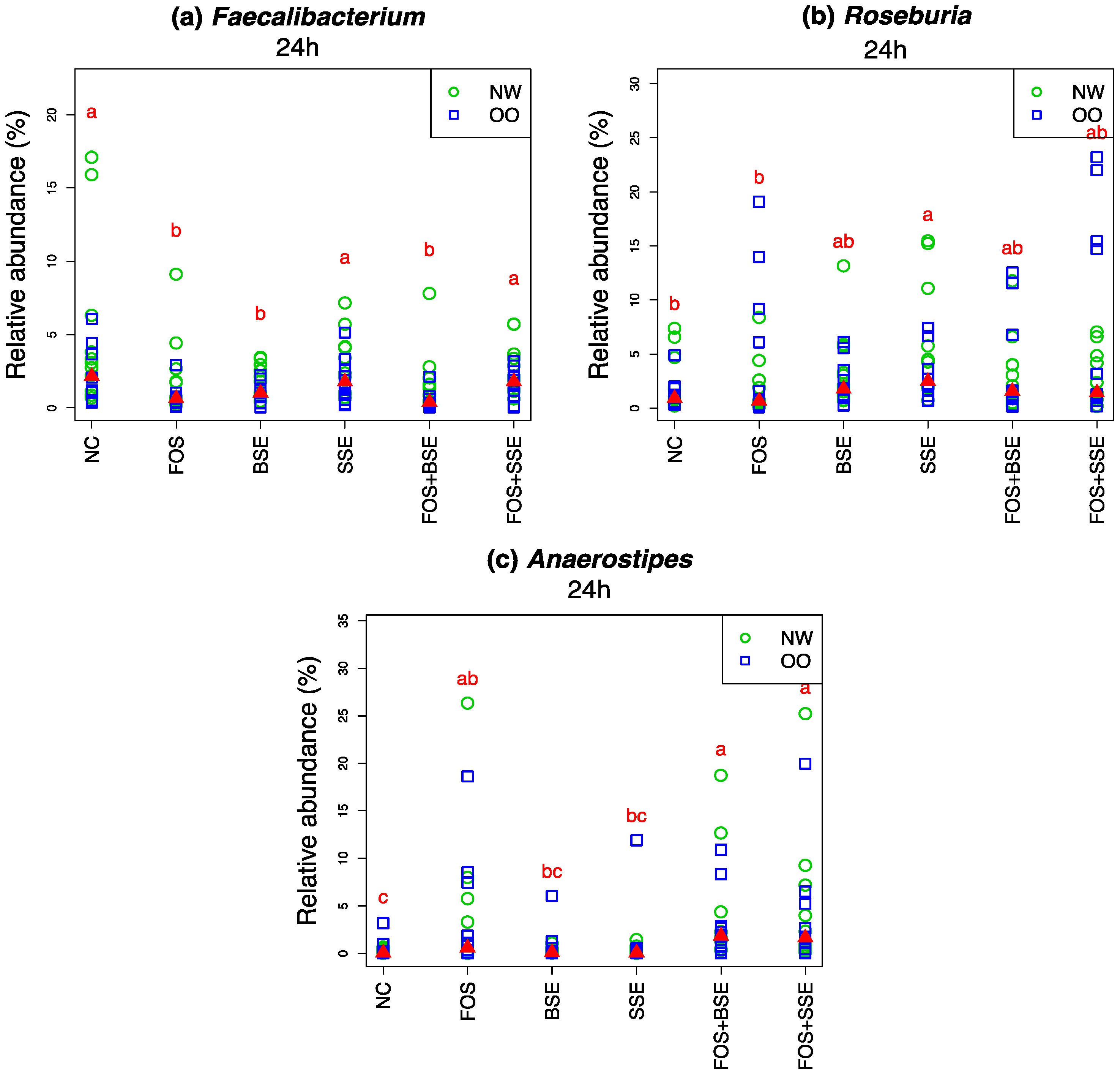