Definition of the Traditional Mexican Diet and Its Role in Health: A Systematic Review

Promoting traditional diets could potentially reduce the current high rates of non-communicable diseases (NCDs) globally. While the traditional Mexican diet (TMexD) could be specifically promoted in Mexico, a concise definition of the TMexD and evidence of its association with NCDs are needed before its promotion. To evaluate what constitutes this diet pattern, we aimed to systematically review, for the first time, how the TMexD has been described in the literature to date. A secondary aim was to examine whether the TMexD, as described by available definitions, is associated with NCD outcomes. We searched for records describing a whole TMexD up to July 2019 in 12 electronic databases, reference lists, a relevant journal, and by contacting experts on the topic. We reported the results using the Preferred Reporting Items for Systematic reviews and Meta-Analyses (PRISMA) guidelines. We included 61 records for the definition of the diet and six for the association with NCD outcomes. The food groups characterising the TMexD that were consistently mentioned in all the study subgroups were grains and tubers, legumes, and vegetables; specific foods included maize, beans, chile, squash, tomato, and onion. Other groups also mentioned, although with lesser frequency, were maize products, fruits, beverages, fish and seafood, meats, sweets and sweeteners, and herbs and condiments. Only a few studies reported on the frequency of consumption or the amounts in which these foods were consumed in the TMexD. It was not possible to reach strong conclusions for the association between adherence to the TMexD and NCD outcomes. The TMexD was weakly associated with developing breast cancer, not associated with triglyceride levels, and inconsistently associated with obesity and diabetes outcomes. However, results were limited by the small number of studies (n = 6), of which most were of observational nature and evaluated diets using different TMexD definitions. These findings provide systematically identified evidence of the characteristics of the TMexD. More studies are needed to ascertain the exact quantities by which foods were consumed in the TMexD in order to establish whether this dietary pattern is associated with health and should be promoted within the Mexican population. View Full-Text
Keywords: Mexican diet; traditional diet; traditional eating; definition; non-communicable diseases; risk factors; systematic review Mexican diet; traditional diet; traditional eating; definition; non-communicable diseases; risk factors; systematic review
►▼ Show Figures 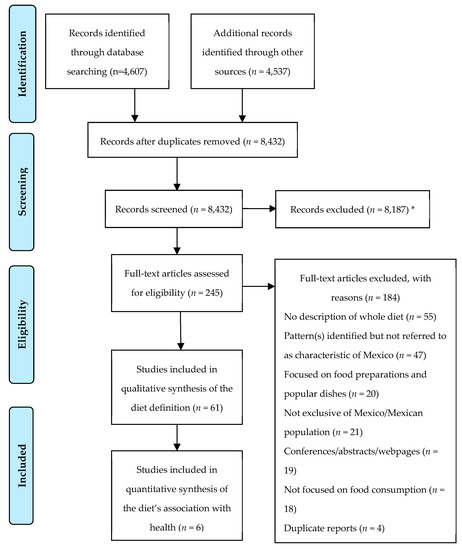 
Valerino-Perea S, Lara-Castor L, Armstrong MEG, Papadaki A. Definition of the Traditional Mexican Diet and Its Role in Health: A Systematic Review. Nutrients. 2019; 11(11):2803.