Definition of the Traditional Mexican Diet and Its Role in Health: A Systematic Review
Next Article in Special Issue

Changes in Microbiota and Bacterial Protein Caseinolytic Peptidase B During Food Restriction in Mice: Relevance for the Onset and Perpetuation of Anorexia Nervosa

Water-soluble dietary fiber is known to modulate fecal microbiota. Although there are a few reports investigating the effects of fiber intake timing on metabolism, there are none on the effect of intake timing on microbiota. Therefore, in this study, we examined the timing effects of inulin-containing food on fecal microbiota. Mice were housed under conditions with a two-meals-per-day schedule, with a long fasting period in the morning and a short fasting period in the evening. Then, 10–14 days after inulin intake, cecal content and feces were collected, and cecal pH and short-chain fatty acids (SCFAs) were measured. The microbiome was determined using 16S rDNA sequencing. Inulin feeding in the morning rather than the evening decreased the cecal pH, increased SCFAs, and changed the microbiome composition. These data suggest that inulin is more easily digested by fecal microbiota during the active period than the inactive period. Furthermore, to confirm the effect of fasting length, mice were housed under a one-meal-per-day schedule. When the duration of fasting was equal, the difference between morning and evening nearly disappeared. Thus, our study demonstrates that consuming inulin at breakfast, which is generally after a longer fasting period, has a greater effect on the microbiota. View Full-Text
Keywords: microbiota; inulin; circadian rhythm; feeding timing microbiota; inulin; circadian rhythm; feeding timing
►▼ Show Figures 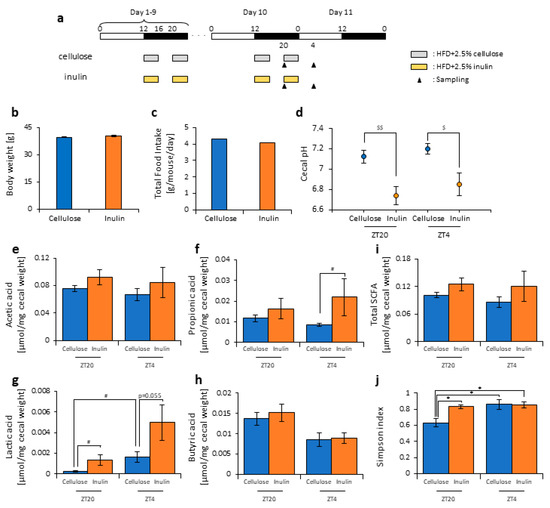