:
The relationship between dietary protein consumption and the risk of type 2 diabetes (T2D) has been inconsistent. The aim of this meta-analysis was to explore the relations between dietary protein consumption and the risk of T2D. We conducted systematic retrieval of prospective studies in PubMed, Embase, and Web of Science. Summary relative risks were compiled with a fixed effects model or a random effects model, and a restricted cubic spline regression model and generalized least squares analysis were used to evaluate the diet–T2D incidence relationship. T2D risk increased with increasing consumption of total protein and animal protein, red meat, processed meat, milk, and eggs, respectively, while plant protein and yogurt had an inverse relationship. A non-linear association with the risk for T2D was found for the consumption of plant protein, processed meat, milk, yogurt, and soy. This meta-analysis suggests that substitution of plant protein and yogurt for animal protein, especially red meat and processed meat, can reduce the risk for T2D.
Keywords:
protein; diet; type 2 diabetes; dose-response; meta-analysis

Diabetes mellitus is considered a serious public health issue worldwide with the vast majority of patients having type 2 diabetes (T2D). According to the International Diabetes Federation, T2D is expected to grow by 54.5 percent from 2013 levels by 2035 [1]. Accordingly, T2D is a tremendous burden on the economic and social medical security system [2].
Dietary factors are major behavioral factors that can influence the risk for T2D to a great extent [3]. One study found that the development of T2D is particularly sensitive to dietary factors, in comparison to other chronic diseases, like cerebrovascular disease or cancer [4].The relationship between protein consumption and T2D incidence has been inconsistently presented. A meta-analysis of this topic pointed out total protein intake may increase the risk of T2D [5], while long-term follow-up observational studies have suggested that high protein intake is not an independent risk factor for T2D [6]. Several longitudinal studies have observed that animal protein including red and processed meat is positively associated with T2D risk [7,8,9]; however, plant-based food which have high protein content is associated with a lower risk of T2D [10,11].
There are a growing number of studies investigating the potential link between protein intake and diabetes, and the conclusions are not consistent. The relationship between protein consumption and high-protein food intake with T2D risk has not been systematically evaluated. To address this question, we performed a meta-analysis of prospective studies to quantify this relationship and identify optimal food types for a low T2D risk.

We identified cohort studies that looked at the relationship between dietary protein intake and T2D by searching the databases of PubMed, Embase, and Web of Science as of 5 March 2019. The full search strategy is presented in Supplementary Table S1; Studies were limited to those in human subjects. If the same cohort has been studied multiple times in different literatures, the latest data were used. In addition, references for the included studies were manually retrieved.

All included studies matched the following criteria: the study must have a cohort design; the study outcomes include type 2 diabetes; the study had to report relative ratio (RR), odds ratio (OR), or hazard ratio (HR); the independent variables for the study included protein intake; and all studies had a quality score as assessed by the Newcastle Ottawa Scale (NOS) of cohort studies of at least 6.

Two authors independently extracted the following information from each publication: the first author, publication year, geographic location, study name, cohort size, the years of follow-up, gender, baseline age of study subjects, diagnosis and assessment of T2D, dietary assessment methods, type of dietary protein, number of participants and T2D cases, dietary protein consumption per category and the RR/OR/HR and 95% CI of T2D incidence related to those categories, number of T2D cases and total subjects per category, and covariates of a fully adjusted model included in the analyses. The dispute was resolved by discussion between the two authors.
Two reviewers independently performed the quality assessment by using the NOS (for cohort and case-control studies) with a full score of 9 stars [12].

If the category of dietary protein intake had an open interval, we assumed that the width of the interval is the same as the adjacent category [13]. For cohort studies reporting HRs or ORs for T2D, we assumed that the HR was RR and transformed the OR to RR by a formula as previously described [14].
We initially pooled RRs and the corresponding 95% CIs from the highest compared with the lowest category of dietary protein intake in each study by the fixed-effect or random-effect model [15]. To capture the detailed nature of the association, the method of generalized least squares regression [16] was used to estimate the linear dose-response relationship for each increment of 5% energy from protein intake, 50 g of meat, fish, poultry, legumes and egg intake (one egg/day), 100 g of milk and yogurt intake, and 30 g of cheese intake. We explored potential non-linear associations by two-stage restricted cubic spline analysis, with three knots at the 25th, 50th, and 75th percentiles of the protein intake distribution [14]. A p value for non-linearity was calculated by testing whether the coefficient of the second spline was equal to zero [17]. Subgroup analyses were conducted by gender (men, women, men and women), age (<50 vs. ≥50 years), follow-up time (<10 vs. ≥10 years), geographic location (Europe, America, Asia, and Australia), and number of cases (<1000 vs. ≥1000).
Heterogeneity among studies was assessed using the Q test and I2 statistic (If the value of I2 > 50%, then heterogeneity may exist) [18]. We assessed publication bias by Begg-Mazumdar’s test and Egger’s tests [19]. A two-sided p value was used with a level of 0.05. All data analyses were performed by using Stata 12.1 (Stata Corp., College Station, TX, USA).

A flowchart (Figure 1) shows the process of research selection. In short, we identified a total of 1919 records in PubMed, 2461 in Embase, 1132 in Web of Science and four from searched references, of which 5292 records were excluded after duplicates were removed and a review of title and abstract; 164 records were further deleted due to violations of the required standards. Finally, 60 articles with 72 studies including 2,623,984 subjects and 141,471 T2D were analyzed in this meta-analysis. Supplementary Tables S2–S6 reveals the characteristics of the 72 studies. And of the included studies, 27 were conducted in USA, 23 in Europe, 17 in Asia, three in Finland, and two in Australia. As displayed in Supplementary Table S7, all the studies were of high quality with scores above six.

Table 1 shows the RR for T2D from the non-linear dose-response analysis of the nine food groups according to daily intake. Optimal intake of risk-decreasing food (60 g/day of yogurt and 200 g/day of milk) results in a 24% reduction () compared to non-consumption. Risk-increasing foods were red meat and processed meat. Compared with non-consumption, consumption of two servings red meat daily (170 g, RR: 1.36) and three serving processed meat daily (150 g, RR: 2.34) was associated with about a three-fold increased risk (). In addition, if these foods not eat, the risk of T2Dwould be reduced by 69% (1 − ).

The results varied little by methodological assumption, including only those with a low risk of bias (Supplementary Tables S8–S19).

Among the investigated protein and high-protein foods, selecting specific optimal intakes (by increasing plant protein and yogurt; and reducing total protein, animal protein including red and processed meat, and eggs) can lead to a significant decrease in risk for T2D. 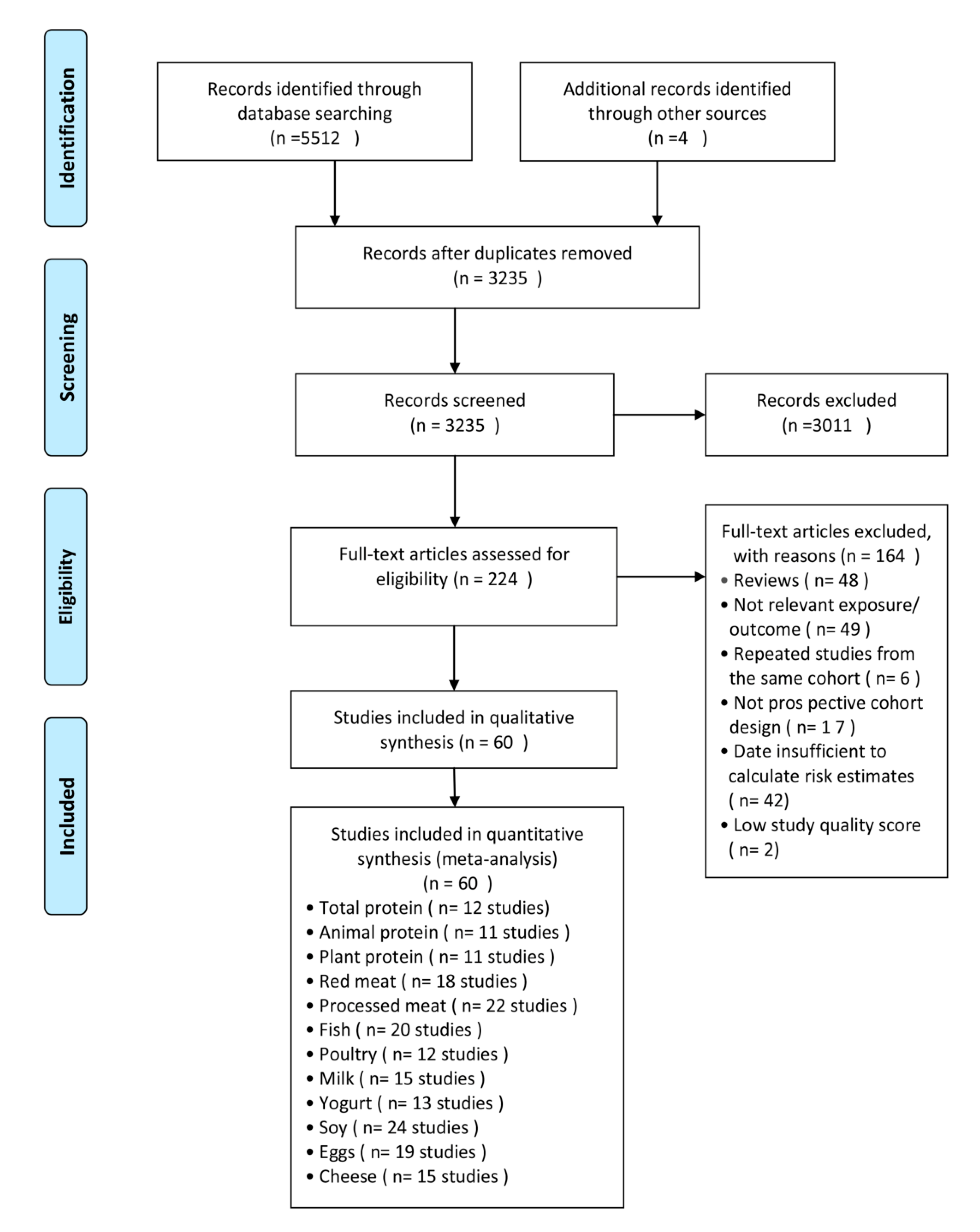