Low Carbohydrate and Low-Fat Diets: What We Don’t Know and Why We Should Know It
Previous Article in Journal

Vitamin D deficiency is a major public health problem worldwide, in all age groups, with particular emphasis in at risk groups. Vitamin D is involved in the absorption and distribution of calcium (Ca2+), and correlations between vitamin D and bone health and Ca2+ homeostasis have been proven by numerous studies [1,2,3]. In addition, more extraskeletal effects of vitamin D have been revealed, and the diverse functions of vitamin D have also been supported by the discovery that vitamin D receptors (VDRs) and vitamin D activating enzymes (hydroxylases) are present in the tissues and cells not involved in mineral and bone metabolism. Because VDRs have been located in multiple tissues, vitamin D deficiency has been associated with an increased risk of chronic diseases such as cardiovascular disease, diabetes, and dementia [4,5,6,7].
The essential role of Vitamin D for older adults is well known. Ca2+ homeostasis is altered in the majority of older adults, especially with chronic kidney disease (CKD), and is manifested predominantly as hypocalcemia, hyperphosphatemia, vitamin D deficiency, fibroblast growth factor-23 (FGF23) elevation (coupled with Klotho deficiency), and secondary hyperparathyroidism. These defects are deleterious to bone and soft-tissue health and lead to the development of metabolic bone disorders, which are associated with aging and morbid clinical outcomes, including fracture, cardiovascular events, and mortality [5,8,9,10]. Hence, recent studies have suggested a relationship between vitamin D and measurements of health conditions. In the last decade, improvements in health systems have resulted in populations living longer [11], however, aging is a complicated process that may result in the loss of functional health, muscle weakness, and disability due to variations in skeletal muscle quantity and quality [12]. Muscle strength is a useful index of declining mobility and disability which are included in the definition of frailty status and are associated with quality of life (QoL) in several populations [13].
In this context, vitamin D has an important role for older adults who are at high risk of deficiency, and therefore adequate intakes of vitamin D should be ensured as a matter of public health. This study aimed, first, to examine the values of vitamin D in a representative sample of the elderly Spanish population (over 65 years) and, secondly, to examine the relationship between serum bone mineral biomarkers and QoL or physical function status.

This study was part of a cross-sectional study carried out from January 2018 to May 2018 and from January 2019 to May 2019 in a representative cohort of individuals aged 65 and older in the north of Spain (Soria). The study was conducted according to the guidelines laid down in the Declaration of Helsinki and approved by the Area de Salud de Burgos y Soria Ethics Committee (Ref. CEIC 1446). Written informed consent was obtained from all subjects and signed prior to testing. The inclusion criteria were adults over 65 years old, not institutionalized, and free of renal illness, dementia, mobility impairments, or chronic disorders that could affect bone mineral metabolism. The Mini-Mental State Examination (MMSE) was used to screen possible cognitive issues and mobility was evaluated based on their ability to walk, without any aid, more than one minute. For the estimating sample size, we considered type one (α) and type two errors (β) of 0.05 and 0.20 (power = 80%), d = 5. We calculated a sample size of 235 participants, based on previous data of vitamin D deficiency prevalence (plasma 25-hydroxyvitamin D3 (25-OH-D3) < 20 ng/mL) in older adults.

Two hundred and seventy-five older adults (over 65 years old) were recruited for the study. Selected participants who were being treated at different primary care centers were interviewed by a research nurse and the following data were collected: demographics, anthropometrics, cigarette smoking, drugs prescribed, falls and hospital admissions during the last year, and clinical group risk (CGR) category. The CRGs category is a claims-based classification system for risk adjustment that assigns each individual to a single mutually exclusive risk group based on historical clinical and demographic characteristics to predict future use of healthcare resources.

The quality of life measures included the EuroQoL-5 dimensions (EQ-5D) which is a standardized measure of health-related quality of life (QoL) that can be used in a wide range of health conditions and treatments. This descriptive system is comprised of the following five dimensions: mobility, self-care, usual activities, pain or discomfort, and anxiety or depression. The EQ-5D-visual analogue scale (EQ-VAS) records an individual’s self-rated health on a vertical visual analogue scale. This was used as a quantitative measure of health outcome that reflected the subjects’ own judgement. The EQ-VAS records the respondent’s self-rated health on a 20 cm vertical, visual analogue scale with endpoints labelled “the best health you can imagine” and ”the worst health you can imagine” [14].
The physical activity questionnaire used was the Physical Activity Scale for the Elderly (PASE), which is a brief (5 min) and easily scored survey designed specifically to assess physical activity in epidemiological studies of adults aged 65 years and older. The PASE score combines information on leisure, household, and occupational activity, as well as assesses the types of activities typically chosen by older adults (walking, recreational activities, exercise, housework, yard work, and caring for others). It uses frequency, duration, and intensity level of activity over the previous week to assign a score, ranging from 0 to 793, with higher scores indicating greater physical activity [15].
To assess nutritional status, the Mini Nutritional Assessment (MNA) is able to classify older adults as well nourished, at risk for malnutrition, or malnourished. The MNA consists of 18 self-reported questions derived from the following four parameters of assessment: anthropometric assessment, general assessment, dietary assessment, and self-assessment. We performed the full MNA for all subjects [16].

Muscular strength was assessed using the hand grip strength test. After adjustment for hand size, three measures were performed with the dominant hand and were averaged for the analysis [17]. Analyses of grip strength were undertaken by age and gender. The European Working Group on Sarcopenia in Older Persons defined weakness based on a grip strength less than 30 kg in men and less than 20 kg in women [18]. For the identification of participants with clinically meaningful weakness, handgrip strength was classified in two categories as follows: weak-intermediate and normal, according to cut-off values published by Alley et al., 2014 [19].

Demographic and clinical data were described as mean and standard deviation (SD) for continuous variables and frequencies (percentages) for categorical data. Independent sample t-tests were used for continuous variables and Chi-square tests for categorical variables. The correlation between variables was measured by calculating the linear coefficient of correlation (Pearson’s r) and the regression by designing multiple linear regression models. Associations between physical performance measures (independent variables) with dependent variables were analyzed with binary logistic regression.
All statistical analyses were corrected for multiple comparisons using the Bonferroni method, in which the threshold p-value is obtained by dividing 0.05 by the number of tests. Data were analyzed using the PASW/SPSS Statistics 24.0 (SPSS Inc, Chicago, IL, USA) program.

Our data provide evidence that serum vitamin D levels are related to older adults self-reported QoL. In addition, on the one hand, vitamin D and Alb levels are negatively related to self-reported problems with anxiety or depression, usual activities or mobility, and three dimensions of QoL in elderly adults. On the other hand, 25(OH)D3 is positively related to hand grip strength in adults over 65 years old. This study suggests that older adults with inadequate levels of vitamin D should be identified early, and therefore future functional decline, problems with QoL, and several adverse health events could be prevented. Vitamin D intake could be a strategy to attenuate age-dependent poor health outcomes. Further studies are required to overcome these strategies and strengthen its benefits for QoL among older adults. 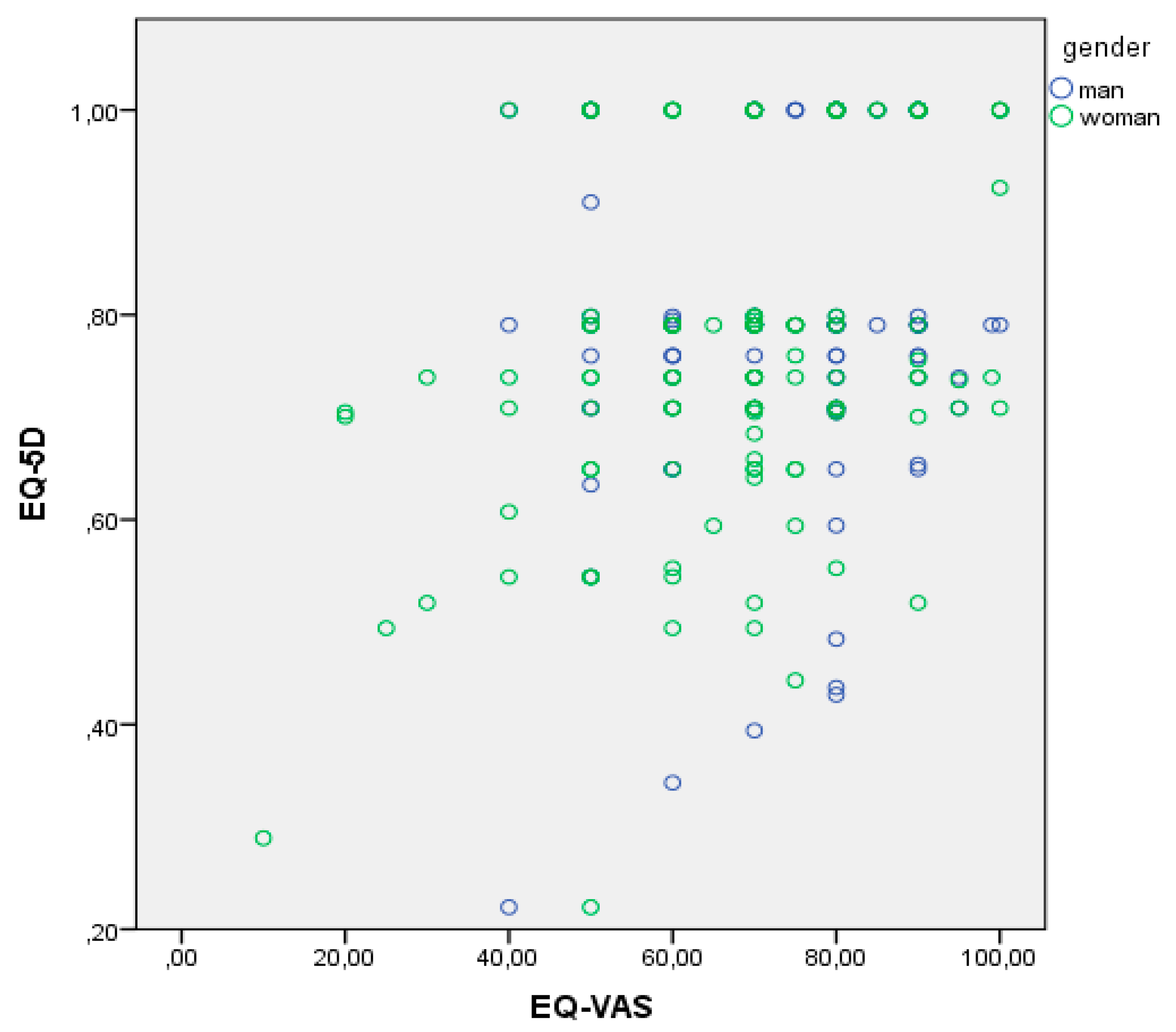