Arterial Stiffness, Sugar-Sweetened Beverages and Fruits Intake in a Rural Population Sample: Data from the Brisighella Heart Study
Next Article in Special Issue

Effects of Zinc Supplementation on Nutritional Status in Children with Chronic Kidney Disease: A Randomized Trial

Maintaining the appropriate skin proteomic profile is a critical parameter for proper cell function and maintenance of healthy skin. For this reason, skin cells are characterized by the well-developed cytoprotective system, comprised of antioxidant, anti-inflammatory, and anti-apoptotic proteins. This protection system also involves active cytoprotective transcription factors which are responsible for protein biosynthesis [1]. However, despite these cytoprotective mechanisms, frequent exposure of skin cells to ultraviolet radiation (UV), mainly UVB (electromagnetic radiation with wavelength from 280 nm to 315 nm) and UVA (from 315 nm to 380 nm) contained in sunlight, stimulates pro-oxidant enzyme activity and impairs the action of antioxidants, resulting in oxidative stress [2,3]. As a consequence, UV enhances ROS-dependent modifications in skin cells covering all cellular components including nucleic acids, proteins, and lipids. This is particularly seen in lipid modification which causes an increase in the level of lipid peroxidation products, including 4-hydroxynonenal (4-HNE), which functions as an important signaling molecule [4]. In addition, the resulting highly reactive electrophilic aldehydes can interact with proteins and significantly modify their structure [5]. Also, UV-induced DNA damage activate proteins responsible for nucleic acids repairing [6]. On the other hand, in the case of keratinocytes, UVB radiation also enhances protein modifications such as advanced glycation end products (AGEs), including lysine carboxymethylation (CML) [7]. Generation of CML leads to dysfunction of the proteins biological functions, their translocation into the cell membrane, and activation of G-protein [8]. As a result, the expression of G-protein coupled receptors is often increased.
As a result, changes in the proteomic profile, including modifications of protein activity, are observed [9,10]. Previous studies have shown that skin cells exposure to UVA and UVB radiation leads to the activation of many factors involved in mitogen-activated protein (MAP)-dependent signaling kinases, including ERK1/2 and transcription factors dependent on redox potential, e.g., Nrf2 [11,12]. As a consequence, the described action of UV radiation leads to metabolic disorders in the skin which can significantly deteriorate the condition of the skin [13].
Due to the hazards of UV exposure, there is a constant need for natural, effective, daily use skin protection compounds. Examples of such compounds are rutin and ascorbic acid, not only due to their potent antioxidant properties resulting from their chemical structure (Figure 1), but also due to their synergistic cytoprotective activity [14]. It has been shown that rutin affects cellular metabolism not only via its antioxidant activity, but also by affecting the biological activity of proteins in varying signaling pathways. Rutin activates cytoprotective transcription factor Nrf2, and also inhibits the activity of cyclooxygenases and lipoxygenases, thereby reducing pro-inflammatory processes [15,16]. Additionally, rutin exerts cytoprotective effects on cells exposed to different types of radiation by substantially increasing their viability [17]. The use of rutin in in vitro cultures may be limited by its toxicity in a high concentration, however, different literature data provide different results regarding the range of its toxicity. In addition, this value depends on the type of cells as well as the length of treatment; long-term rutin treatment of cancer cells shows that the toxic concentration of rutin is already in the range 125–250 µM [18,19]. However, in the case of HaCaT keratinocytes, rutin toxicity is visible only above a concentration of 1 mM [20]. However, the action of rutin is limited by cell membrane permeability, which is significantly increased by UV radiation as a result of activation of membrane transporter, bilitranslocase [10]. Ascorbic acid also enhances rutin membrane permeability [21]. On the other hand, ascorbic acid applied to the skin exhibits a number of cytoprotective activities, such as supporting the antioxidant effect of vitamin E [22] and normalizing respiratory chain action by stabilizing mitochondrial membrane polarization in UV-irradiated human skin fibroblasts [23], as well as providing significant protection against inflammation and sunburn [24]. Treatment with ascorbic acid induces well-organized multilayers in 3D keratinocyte cultures, however, exceeding a concentration of 1 mM promotes too fast and uncontrolled cell differentiation [25,26].
To date, the interaction of orally-administered rutin with ascorbic acid has been demonstrated in terms of anti-inflammatory and vascular sealing actions [27]. Moreover, recent work has shown that combining rutin with ascorbic acid results in a synergistic, cytoprotective effect from UV radiation in vitro [14]. The aim of this study was to examine the combined effect of rutin and ascorbic acid on the proteomic profile in UVA and UVB irradiated keratinocytes grown in a three-dimensional (3D) epidermal-like system.

Human cell keratinocytes line CDD 1102 KERTr were obtained from American Type Culture Collection (ATCC, Manassas, VA, USA) and cultured in a humidified atmosphere of 5% CO2 at 37 °C. According to the cell culture protocol provided by ATCC, the growth medium for keratinocytes was keratinocyte-SFM medium supplemented with 1% bovine pituitary extract (BPE), human recombinant epidermal growth factor (hEGF), 50 μg/mL streptomycin, and 50 U/mL penicillin. Sterile and cell culture reagents were obtained from Gibco (Grand Island, NY, USA). 3D culture was carried out in AlgiMatrix plates (Life Technologies, Carlsbad, CA, USA).
Keratinocytes, following four days of 3D gel culturing, were irradiated with the following UV doses: UVA (365 nm)—30 J/cm2 and UVB (312 nm)—60 mJ/cm2 (Bio-Link Crosslinker BLX 312/365; Vilber Lourmat, Germany). To observe the effect of ascorbic acid and rutin on UV radiated cells following exposure to UV radiation, cells were incubated for 24 h under standard conditions in medium containing 100 µM ascorbic acid (19.81 mg/L) or/and 25 µM rutin (15.25 mg/L) in 0.1% DMSO. The concentration of ascorbic acid was selected according to the suggested concentration of this compound obtained in the body through a balanced diet, while the rutin concentration was chosen as the highest non-cytotoxic dose [14,28]. In parallel, cells were cultured without irradiation in medium containing the above supplements. In order to maintain the same conditions for all experimental and control groups, all media contained 0.1% DMSO.
Following incubation, keratinocytes were collected from 3D gel with AlgiMatrix™ dissolving buffer (Life Technologies, Carlsbad, CA, USA), lysed by sonification on ice, and centrifuged (15 min, 12,000× g). The total protein content in supernatant was measured using a Bradford assay [29]. Figure 2 shows the diagram of the experiment scheme.

The supernatant was mixed 1:1 with Laemmle buffer (supplemented with 5% 2-mercaptoethanol) and heated at 95 °C for 10 min for protein denaturation. Samples were separated on 10% Tris-Glycine SDS-PAGE gels and stained with Coomassie brilliant blue R-250. Complete lanes were cut out of the gel, sliced into 12 sections and in-gel digested overnight with trypsin (Promega, Madison, WI, USA). The resulting peptide mixture was extracted from the gel, dried, and dissolved in 5% ACN + 0.1% formic acid (FA) and separated using an Ultimate 3000 (Dionex, Idstein, Germany) onto a 150 mm × 75 mm PepMap RSLC capillary analytical C18 column (Dionex, LC Packings). The peptides eluted from the column were analyzed using a QExactive HF mass spectrometer with an electrospray ionization source (ESI) (Thermo Fisher Scientific, Bremen, Germany).

The results of this study showed that rutin and ascorbic acid treatments lead to significant changes in protein expression in UVA or UVB irradiated keratinocytes. For all samples 862 proteins with at least two unique peptides were identified and measured (Table S1). As is shown in Figure 3, there was a strong differentiation between all treatment conditions following principal component analysis (PCA) (component 1–42.8%; component 2–8.9%). The top 20 proteins from PCA component 1, along with their VIP scores, are presented in Figure 2. Moreover, these results were confirmed by the hierarchical clustering of the top 100 proteins with a significant p-value (Figure 4). Comparing the p-values allowed us to identify which proteins had the highest differences in expression following rutin and ascorbic acid treatment (Figure 5). The main changes observed were in the case of proteins involved in antioxidant response, including peroxiredoxin 1, glutathione reductase, glutathione S-transferase, protein disulfide-isomerase, superoxide dismutase (Cu–Zn), thioredoxin reductase 1, thioredoxin-dependent peroxide reductase, and the cytoprotective transcription factor, Nrf2. The expression of these proteins changed following rutin and ascorbic acid treatment, which counteracted UV-induced alterations. In addition, the UV induced increase in DNA repairing proteins level, such as PARP-1 and FEN1 (Poly(ADP–ribose) polymerase 1, Flap endonuclease 1), was partially decreased by the protective rutin and ascorbic acid action. Simultaneously, rutin and ascorbic acid decreased the expression of some proinflammatory (NFκB, TNFα) and proapoptotic (p53, cell cycle/apoptosis regulator protein 2, caspase 3) proteins. In all, cases rutin treatment, following UV radiation, showed slightly stronger cytoprotective effects than ascorbic acid, however, the use of these two antioxidants in the cases of proapoptotic and proinflammatory proteins allowed the UV irradiated cells to restore the level of mentioned proteins following cell stress.
UV-induced oxidative stress also significantly increased post-translational protein modifications (PTMs), including lysine/cysteine carboxyethylation and carboxymethylation (Figure 6). While ascorbic acid significantly reduced the level of these modifications, rutin favored their creation under both standard conditions and following UV-induced stress. However, combined use of rutin and ascorbic acid decreased the level of analyzed PTMs in keratinocytes exposed to UV radiations.

This study was financed by the National Science Centre Poland (NCN) grant no. 2017/25/N/NZ7/00863. A.G., co-author of the work, was supported by the Foundation for Polish Science (FNP). 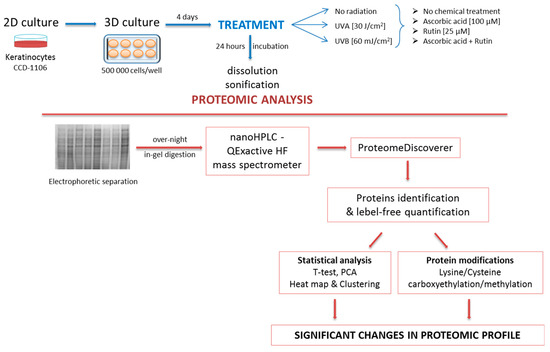 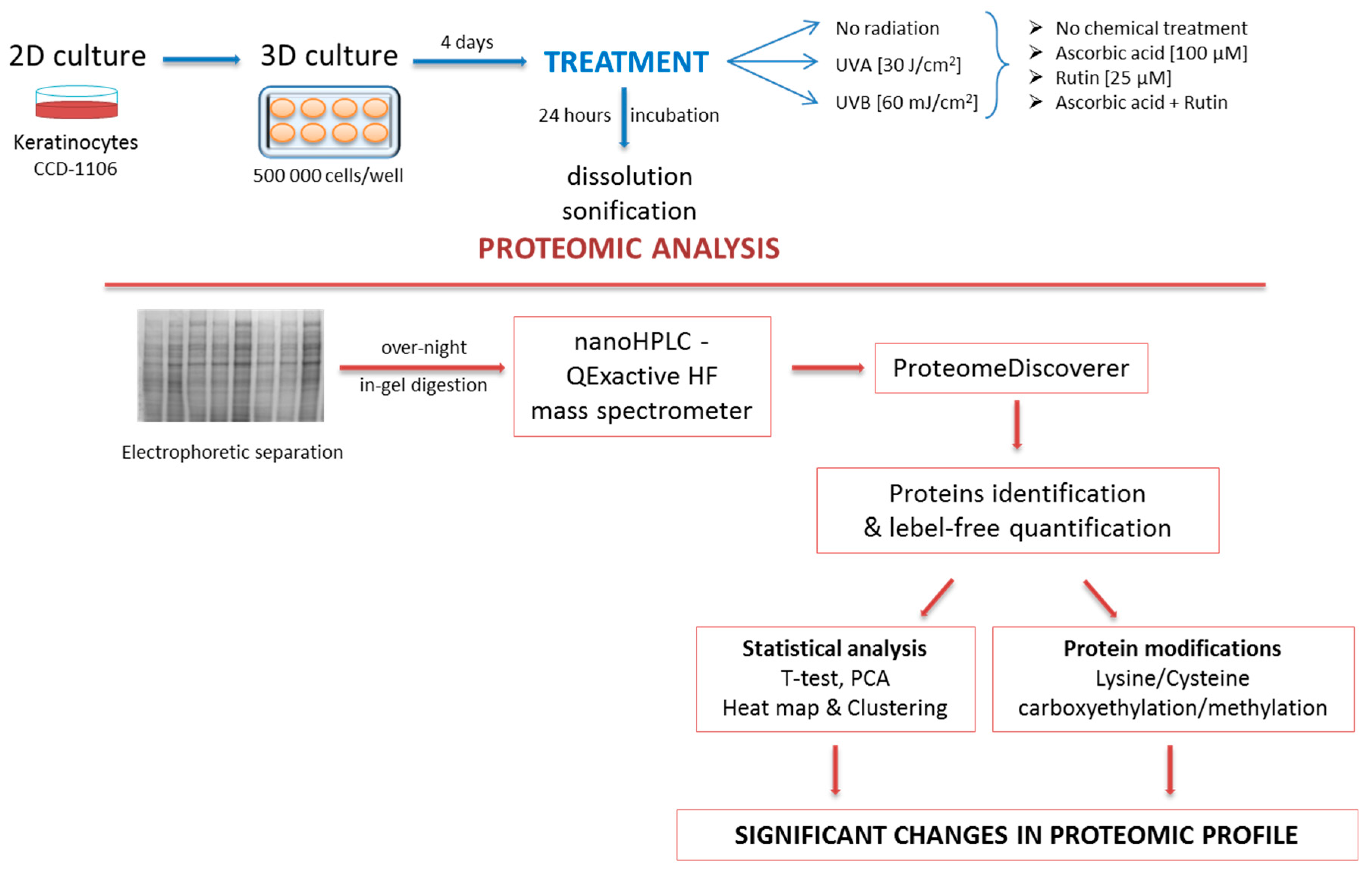 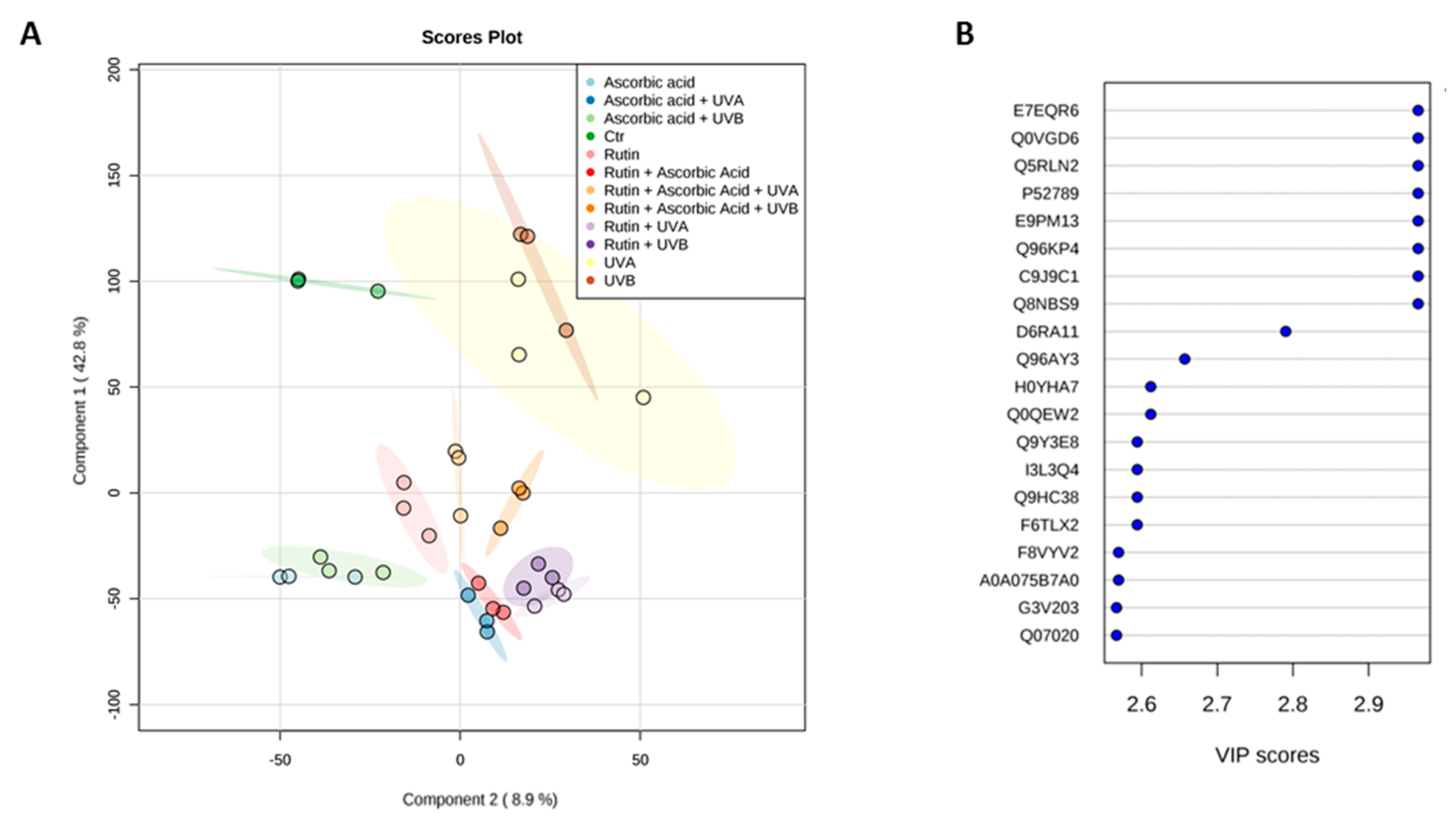 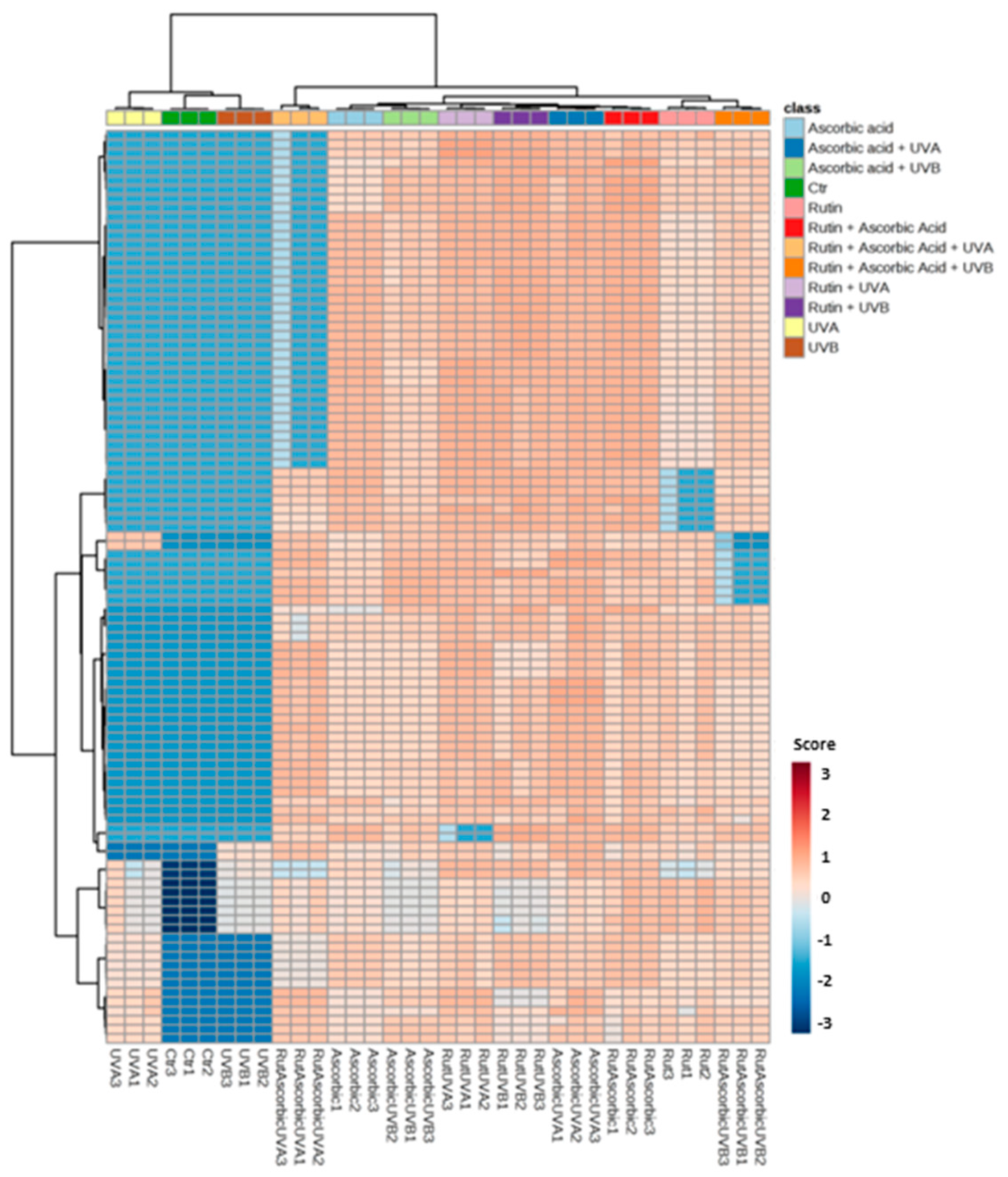 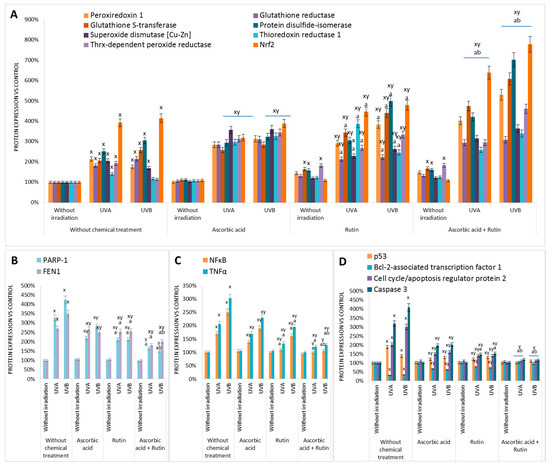 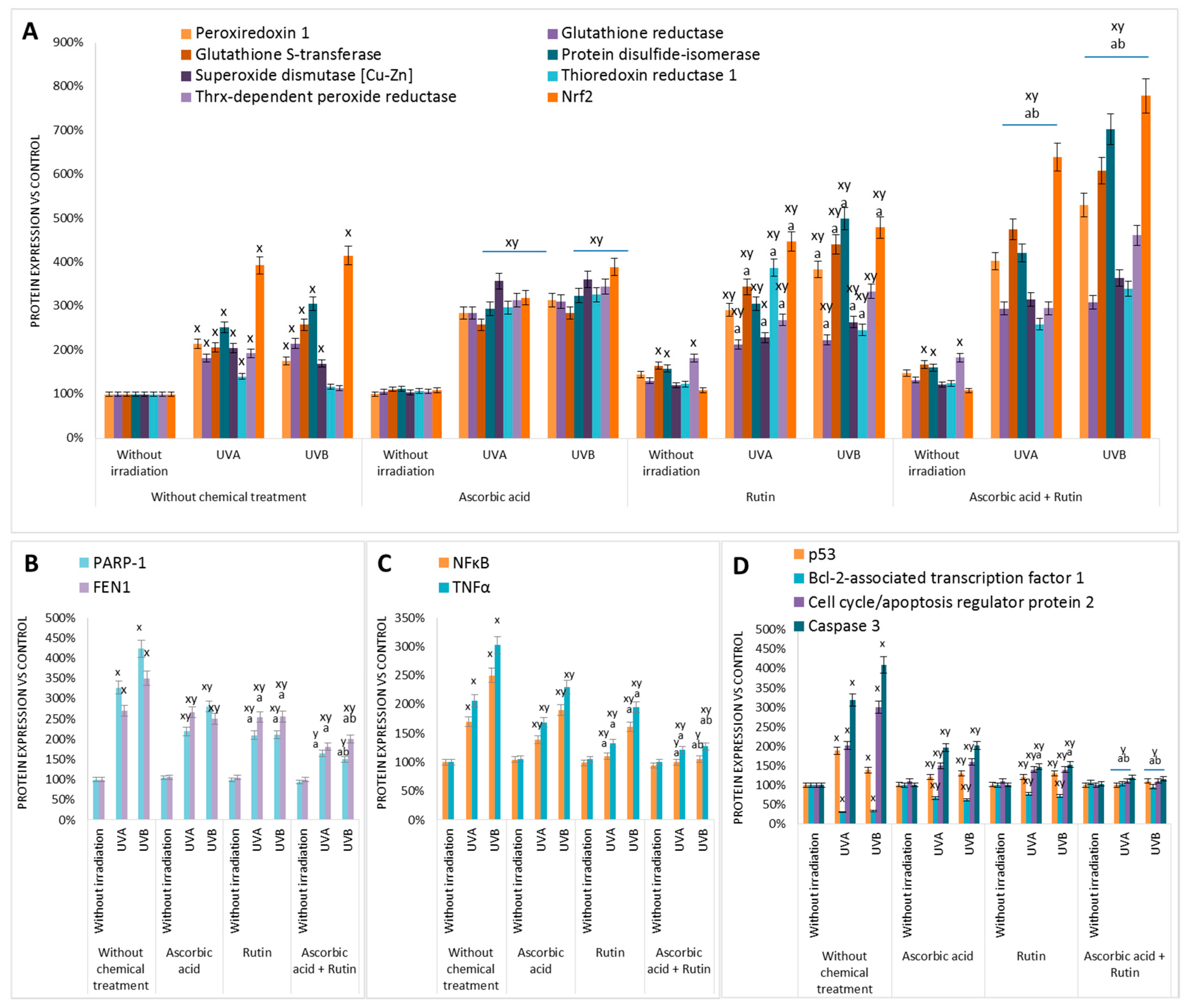