Prevention of Type 2 Diabetes by Lifestyle Changes: A Systematic Review and Meta-Analysis

A rapid increase in colorectal cancer (CRC) incidence has been observed worldwide; CRC rates nearly doubled between 2002 and 2018 due to a shift in lifestyles and diet [1,2,3,4]. Notably, CRC is the second most prevalent cancer in Asian countries, such as South Korea [5,6]. Regarding diet, beverage intake, including tea, increased threefold over a decade in Korea [7]. Among the variety of teas, green tea may have beneficial effects on CRC due to its polyphenol content [8,9]. Moreover, green tea may influence multiple stages of carcinogenesis by reducing antioxidant capacity and preventing inflammation [10,11]. Although experimental studies have demonstrated that green tea strongly contributes to a decreased risk of CRC, previous epidemiological studies have reported inconsistent results [12,13,14]. A recent meta-analysis of 12 case-control studies and 17 cohort studies with 1,642,007 participants identified an inverse association between the risk of CRC and green tea consumption [12]; however, there were no such associations in a Chinese prospective cohort study [13] and an Australian case-control study [14]. Furthermore, the evidence linking CRC with tea consumption was classified as limited [15].
Both green tea intake and lifestyle factors likely have essential roles in colorectal carcinogenesis. A number of health-related factors, such as body mass index (BMI), alcohol consumption, physical activity, smoking and the dietary inflammatory index (DII), have been associated with CRC risk [16,17,18]. Although some of the investigated factors were found to be related to green tea consumption [19], no studies have examined the protective effect of green tea intake considering lifestyle factors on CRC risk in South Korea. Furthermore, the variable results of epidemiological studies on the risk of CRC with green tea intake might be the result of numerous lifestyle factors.
Thus, we examined whether green tea consumption was associated with a lower risk of CRC. Additionally, we determined the interactions between CRC and lifestyle factors and how the risk of CRC was altered by the interaction between green tea consumption and lifestyle factors.

The details of this case-control study have been reported elsewhere [18,20]. This case-control study was initiated in 2010 at the National Cancer Center (NCC), Korea. Cases were recruited from patients newly diagnosed with CRC between August 2010 and August 2013 at the Center for CRC. Of the 1070 individuals who agreed to participate in the study, two patients were excluded due to improbable energy intake (<500 or ≥4000 kcal/day), and 145 individuals were excluded due to incomplete dietary data. Therefore, 923 patients were ultimately included in this analysis. Controls were recruited from individuals who visited the Center for Cancer Prevention and Detection at the same hospital for health checkups between October 2007 and December 2014. Among the 14,201 healthy participants, 5044 and 120 individuals were excluded due to incomplete dietary data and implausible energy intake (<500 or ≥4000 kcal/day), respectively. For the remaining 9037 participants, two controls per case were frequency-matched by age (within five years) and sex. Subsequently, 27 participants were excluded due to extreme tea consumption (>1600 g/day). Ultimately, 2742 participants were included in the final analysis (922 cases and 1820 controls; Figure S1). All subjects provided written informed consent. The study was approved by the Institutional Review Board (IRB) of the NCC (IRB number: NCCNCS-10-350 and NCC2015-0202).

Lifestyle factors, such as prior BMI, smoking (current-, former- or never-smoker), alcohol consumption (current-, former- or never-drinker), physical activity (yes or no) and the DII, were selected based on previous evidence of risk factors for CRC and their association with CRC according to the data [16,17,18,22]. First, we found that prior BMI (prior two years before diagnosis) was more significantly associated with CRC in our study than current BMI, as shown in our previous work [18]. As a result, prior BMI was used as an index for obesity. Second, physical activity was defined as regular physical exertion. Third, alcohol consumption and smoking were chosen and classified as ever or never based on previous studies [16,17]. Fourth, the DII was selected as the criterion for a healthy diet based on our former work showing a positive association between DII and the risk of CRC [18,22], and participants were divided into two groups depending on the median intake value of the controls.

The differences in age and dietary intake (continuous variables) between cases and controls were analyzed using Student’s t-test. Other categorical demographic and lifestyle factors were tested using the chi-squared test.
The associations of green tea consumption with CRC were assessed using logistic regression models adjusted for first-degree family history of CRC (yes or no), education (<12 years or ≥12 years) and lifestyle factors, including prior BMI (≥25 kg/m2 or <25 kg/m2), regular exercise (yes or no), smoking (ever-smoker or never-smoker), alcohol consumption (ever-drinker or never-drinker) and DII (high or low) according to anatomical site (i.e., colon and rectal cancer). Green tea consumption was divided into tertiles depending on the distribution in the control group, with the lowest tertile considered as a reference for all analyses. Trends were tested with the median values of green tea consumption in each tertile group as continuous variables. Regarding the associations between lifestyle factors and the risk of CRC, multivariable models were used to consider adjusting for first-degree family history of CRC, education and green tea intake, and additionally adjusting for the other lifestyle factors as needed, stratified by anatomical site. Furthermore, multinomial logistic regression analyses were conducted to identify the interactions between lifestyle factors and green tea consumption in relation to CRC risk. The interactions between each health-related factor and green tea intake were analyzed using a likelihood ratio test, with the model containing main effects and covariates, and they were also stratified by anatomical site. To further clarify the risk of CRC considering health-related factors, the association between green tea consumption and CRC risk was stratified by smoking, alcohol consumption and DII values, which may present some interactions in the analysis.
All statistical analyses were performed at the 5% significance level using the SAS statistical package (SAS 9.4; SAS Institute, Cary, NC, USA).

3.2. Associations Between Green Tea Intake and Risk of CRC by Anatomical Site

The association between CRC and green tea intake according to anatomical site was examined (Table 2). The number of patients with CRC, colon cancer and rectal cancer was 922, 462 and 444 participants, respectively. Those in the highest tertile had a lower risk of CRC than those in the lowest tertile (odds ratio (OR) 0.59; 95% confidence interval (95% CI) 0.46–0.76; p for trend <0.001) in the multivariate model. After stratifying by anatomical site, these associations were slightly stronger among patients with rectal cancer than among those with colon cancer.

3.3. Associations Between Lifestyle Factors and Risk of CRC by Anatomical Site

In conclusion, both high green tea intake and a healthy lifestyle were independently associated with a reduced risk of CRC. The protective effect of green tea consumption considering lifestyle factors on CRC was evidently shown, especially in the group with the highest green tea intake. These findings could provide a new understanding of the beneficial role of green tea consumption in the etiology of CRC and a new strategy for the prevention of CRC depending on smoking and drinking status. 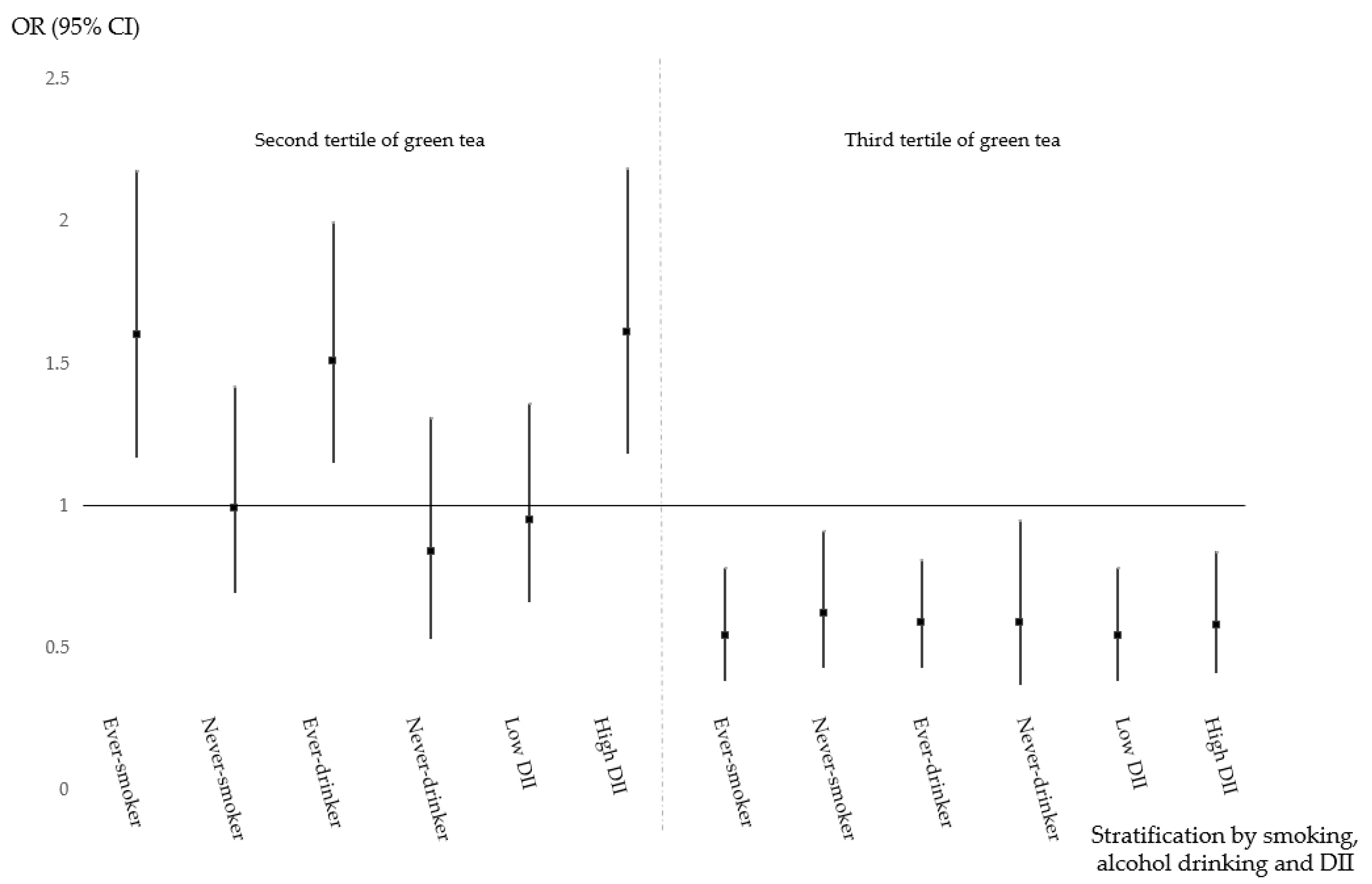 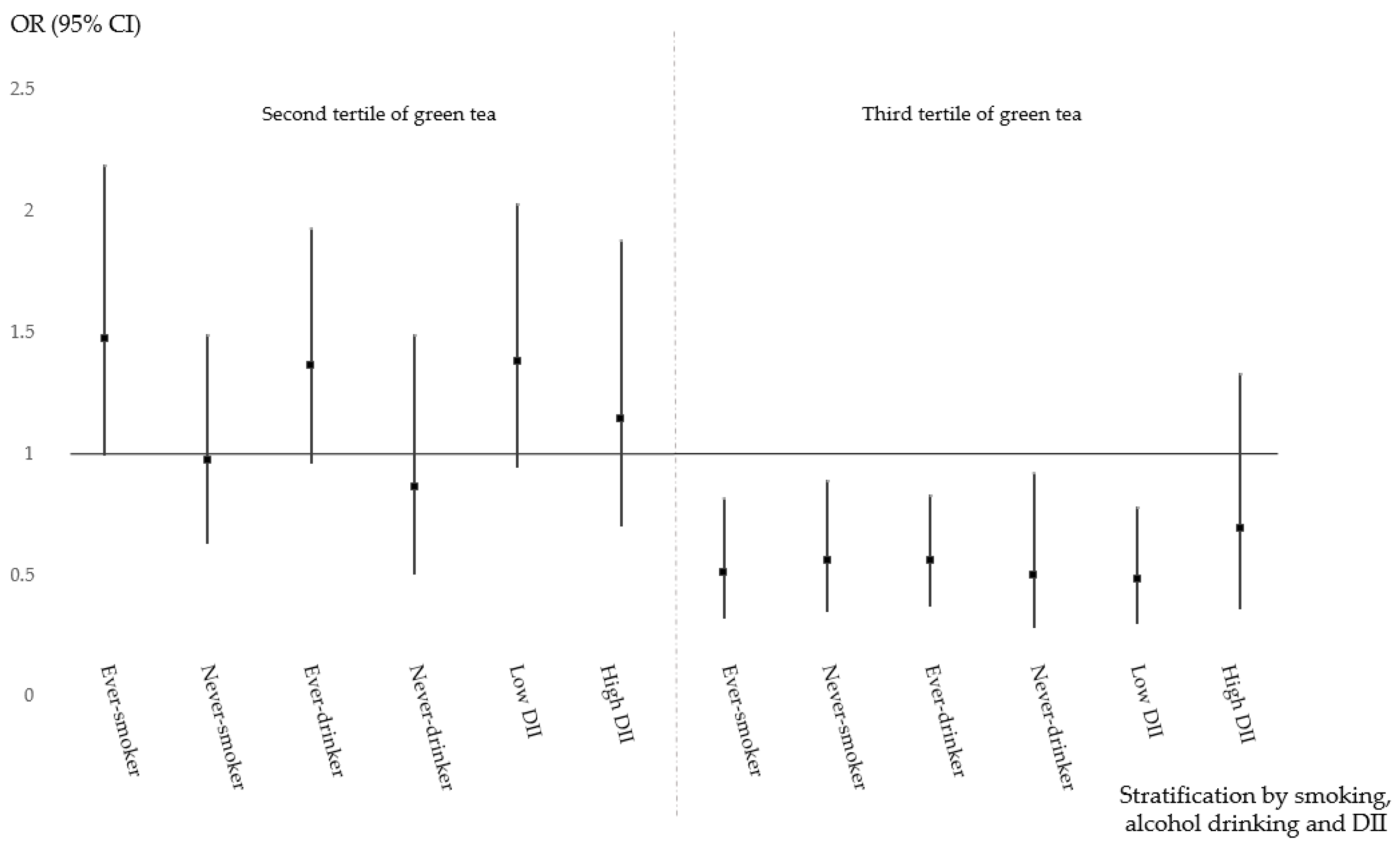 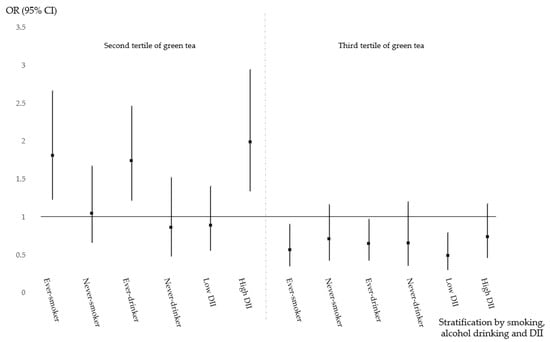 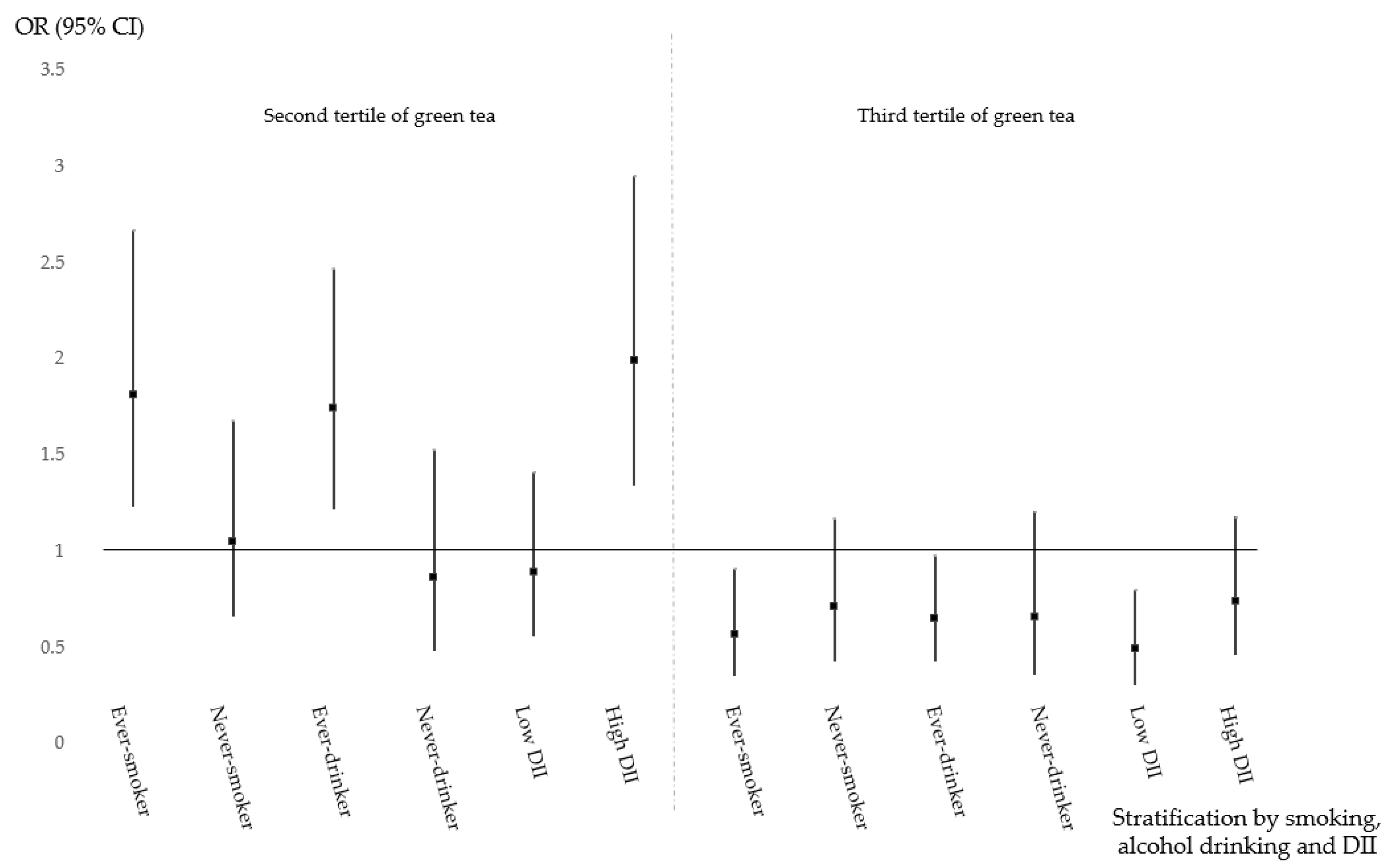