A recent randomized controlled trial (RCT) of 4 g/day of marine omega3 fatty acids (OM3), specifically 4 g/day of icosapent ethyl (3.84 g/day of eicosapentaenoic acid (EPA)) on cardiovascular disease (CVD), the Reduction of Cardiovascular Events with Icosapent Ethyl-Intervention Trial (REDUCE-IT), showed a significant 25% relative risk reduction in CVD outcomes compared to the control group. The REDUCE-IT trial was conducted among 8,179 statin-treated patients with CVD or diabetes and with high triglycerides (TG) and low low-density lipoprotein cholesterol (LDL-C) [1]. This result is in striking contrast to the results of recent RCTs of low-dose (≤1 g/day) OM3 that showed no significant effect of OM3 on CVD outcomes in a variety of groups: subjects with CVD (Alpha-Omega [2] and Supplementation en Folates et Omeag-3 [3]), without CVD (Vitamin D and Omega-3 Trial [4]), with multiple CVD risk factors (Risk and Prevention Study [5]), diabetes (A Study of Cardiovascular Events iN Diabetes [6]), or glucose intolerance (the Outcome Reduction with an Initial Glargine Intervention [7]). The rationale for the dosage of REDUCE-IT (4.0 g/day of OM3) was to mimic the blood levels of OM3 observed in the intervention group in the Japan eicosapentaenoic acid (EPA) Lipid Intervention Study (JELIS), [1,8] an RCT in Japan of EPA alone that showed a significant 19% relative risk reduction in CVD outcomes compared to the control group in 18,645 statin-treated subjects with and without CVD [9]. JELIS used 1.8 g/day of OM3, equivalent to 3.6 g/day of OM3 in the US, due to the very high dietary intake of OM3 in Japan [8]. These results indicate that high- but not low-dose OM3 reduces CVD outcomes.
Neither REDUCE-IT [1] nor JELIS [9] has directly tested the mechanism of high-dose OM3. OM3 has varying effects on traditional risk factors (blood pressure, high-density lipoprotein cholesterol (HDL-C), TG, etc.). These effects are modest at best, even with a high-dose OM3 (4 g/day) [10,11] except for lowering TG among patients with high TG [12]. However, the significant reduction in CVD outcomes in these two trials does not depend on baseline TG levels [1,9], suggest that lowering TG is unlikely to be a major mechanism of high-dose OM3 in reducing CVD outcomes. In fact, REDUCE-IT investigators recently reported that the cardiovascular benefits were primarily tied to non-TG-related effects [13]. OM3 has other effects on the cardiovascular system, including anti-atherosclerotic, anti-inflammatory, anti-thrombotic, and anti-arrhythmic properties [12,14,15]. Investigators of the REDUCE-IT trial discussed that the benefit of high-dose OM3 seen in this trial was due in part to the anti-atherosclerotic and anti-inflammatory properties [1]. They also speculated that the benefit was not due to anti-thrombotic or anti-arrhythmic properties [1]. This speculation is in accordance with recent reviews that anti-thrombotic or anti-arrhythmic properties are unlikely pathways of high-dose OM3 (4 g/day) for reducing CVD outcomes [12,16].
A recent RCT in the US of 3.4 g/day of OM3 in patients with coronary heart disease (CHD) reported slower progression of coronary plaques [17]. Moreover, three RCTs of 1.8 g/day of OM3 in Japan (equivalent to 3.6 g/day of OM3 in the US) showed significantly slower progression of coronary atherosclerosis in patients with CHD in the intervention group as compared to the control group [18,19,20]. However, no systematic review and meta-analysis of RCTs has been conducted on the effect of high-dose OM3 on atherosclerosis. In this systematic review and meta-analysis, we hypothesized that high-dose OM3 significantly slows the progression of atherosclerosis.

This article has been reported in accordance with the Preferred Reporting Items for Systematic Reviews and Meta-Analyses [21]. The protocol was registered with PROSPERO (CRD42019125566). A systematic search of PubMed, Embase, Cochran Central Register of Controlled Trials and clinicaltrials.gov was conducted from the earliest publication date through March 1, 2019. The reference lists of included studies in the search were also screened for additional studies. The search strategies are available in Tables S1 and S2. After removal of duplicates, the titles and abstracts were retrieved by five authors (AS, CC, DS, XZ, WH) to select relevant studies. Then, full-texts were independently retrieved by pairs of authors (AS, CC, DS, XZ) and the final list of studies was determined by discussion, including minor differences being resolved with another author (AF).
The studies included were RCTs (1) conducted among adults (≥18 years) without hemodialysis, (2) using high-dose OM3 supplements (defined as ≥3 g/day of OM3 or ≥1.8 g/day of OM3 in Japan) with purity of OM3 ≥90% as the intervention, (3) using atherosclerosis as the primary outcome, (4) reporting percent or absolute change of atherosclerosis, (5) with the intervention period ≥6 months, and (6) with articles published and available in full-text English language.
The data extracted from each selected RCT included characteristics and demographics (first author, publication year, study location, study design, etc.), baseline participant’ characteristics (total sample size, age, health condition, etc.), dose and purity of OM3, duration of intervention, methods to assess atherosclerosis, baseline and post-pre-intervention change in atherosclerosis, and net difference in change of atherosclerosis. Only the primary outcome was extracted when multiple endpoints were reported.
Risk of bias assessment was evaluated independently by four investigators (AS, CC, DS, and XZ) using the Cochrane Collaboration’s tool for assessing risk of bias across seven domains (random sequence generation, allocation concealment, blinding of participants and personnel, blinding of outcome assessment, incomplete outcome data, selective outcome reporting, and other source of bias) [22]. The judgment of high, low, or unclear risk of bias was assigned for each item. When more than four domains were regarded as high quality, the study was considered to be at low risk.

Mean change from baseline of atherosclerotic measurements was calculated for the treatment and control groups, and the standardized mean difference (SMD) was computed as the measure of effect [23]. The pooled SMD across studies (with the 95% confidence intervals (CIs)) was calculated based on a random effect model: where
For studies where the mean change and standard deviation (SD) was not available, SMD was estimated using the median change, interquartile range (IQR), and sample size [24,25]. For results in which positive values represented improvement (e.g., fibrous cap thickness), the estimate was multiplied by −1 to make the direction of the result consistent with the results of other RCTs. Heterogeneity of the studies was assessed with the I2 statistic to describe the percentage of variation across each study that may be due to heterogeneity rather than chance. In addition, a funnel plot was generated to identify potential publication bias or systematic heterogeneity. Because we detected significant heterogeneity, sensitivity analyses were performed by removing the most influential study followed by removing the next influential study.
To assess whether the effect of OM3 on atherosclerosis differed by study characteristics, a subgroup analysis was conducted by location (Japan vs. other countries), site of atherosclerosis (coronary vs. carotid arteries), placebo-controlled (yes vs. no), CHD (yes vs. no), statin use (yes vs. no), source of OM3 (EPA only vs. EPA + docosahexaenoic acid (DHA)), and risk of bias (high vs. low). All analyses were conducted with Cochrane Review Manager 5.3 [23]. The level of significance was set at p < 0.05. Subgroup analyses were assessed with Bonferroni correction for multiple comparisons.

Of the 598 articles retrieved, 12 studies were identified that met our review criteria. Among the 12 RCTs, six were RCTs of high-dose OM3 with purity of OM3 ≥90% and were included in the analysis (Figure 1) [17,18,19,20,26,27]. These trials were published as early as 2006 but most were published in 2016 and 2017 (Table 1). These RCTs were conducted in Japan (n = 4), the US (n = 1) and the UK (n = 1). The participants (a total of 693, 71% male) were patients with CHD (n = 4), [17,18,19,20] type 2 diabetes (n = 1) [26] or nonalcoholic fatty liver disease (n = 1) [27]. Participants in four RCTs were treated with a statin. Only one study was placebo-controlled and the other five were open-label trials with no placebo. The dose of OM3 ranged from 1.8 to 3.36 g/day. All the four RCTs conducted in Japan used highly-purified EPA [18,19,20,26] whereas the other three studies used a combination of EPA and DHA [17,27]. The average follow-up duration ranged from 6 to 30 months (Table 1).
The four RCTs that recruited patients with CHD evaluated atherosclerosis in the coronary artery using various methods (coronary computed tomography angiography [17], intravascular ultrasound [19,20], and optical, coherence tomography [18]) (Table 2). The primary outcome differed for each RCT (% change in non-calcified plaque volume [17], change in lipid plaque volume [19], change in fibrous-cap thickness [18], and change in normalized total atheroma volume [20]). Two RCTs that recruited non-alcoholic fatty acid disease [27] or type 2 diabetes [26] evaluated atherosclerosis in the carotid artery with B-mode ultrasound. One RCT used change in mean intima-media thickness (IMT) [27] whereas another study used change in max IMT of the carotid artery [26] as the primary outcome. These four RCTs documented that the OM3 significantly slowed the progression of atherosclerosis as compared to the control group [18,19,20,26] (Table 2).
Three out of the six trials were considered to have high risk of bias (score <5) (Table 3). They were open label trials without placebo. Two of the three trials did not provide enough information on random sequence generation, allocation concealment, and selective outcome reporting.
Overall, OM3 significantly slowed the progression of atherosclerosis (SMD −1.97, 95% confident interval (95%CI) −3.01, −0.94: p < 0.001). A significant heterogeneity was observed across these studies (I2 = 97%, p < 0.001) (Figure 2). Our sensitivity analysis showed that after excluding the most influential study, OM3 significantly slowed the progression (SMD −1.17 95% CI −1.99, −0.34: p = 0.006.) After further excluding the next influential study, the effect was attenuated and became non-significant (SMD −0.65 95% CI −1.33, 0.03: p = 0.06) (Figure 3).
In subgroup analysis, the effect of OM3 on atherosclerosis differed significantly by study location (Japan vs. other countries), site of atherosclerosis (coronary vs. carotid arteries), use of placebo (placebo-controlled trials vs. trials without placebo), presence of CHD (yes vs. no), statin use (yes vs. no), and source of OM3 (EPA vs. a combination of EPA and DHA). However, the subgroup analysis showed that the effect was not significantly different by risk of bias (high vs. low) (Figure 4).

The study is funded by the National Institutes of Health grant: RF1AG051615. 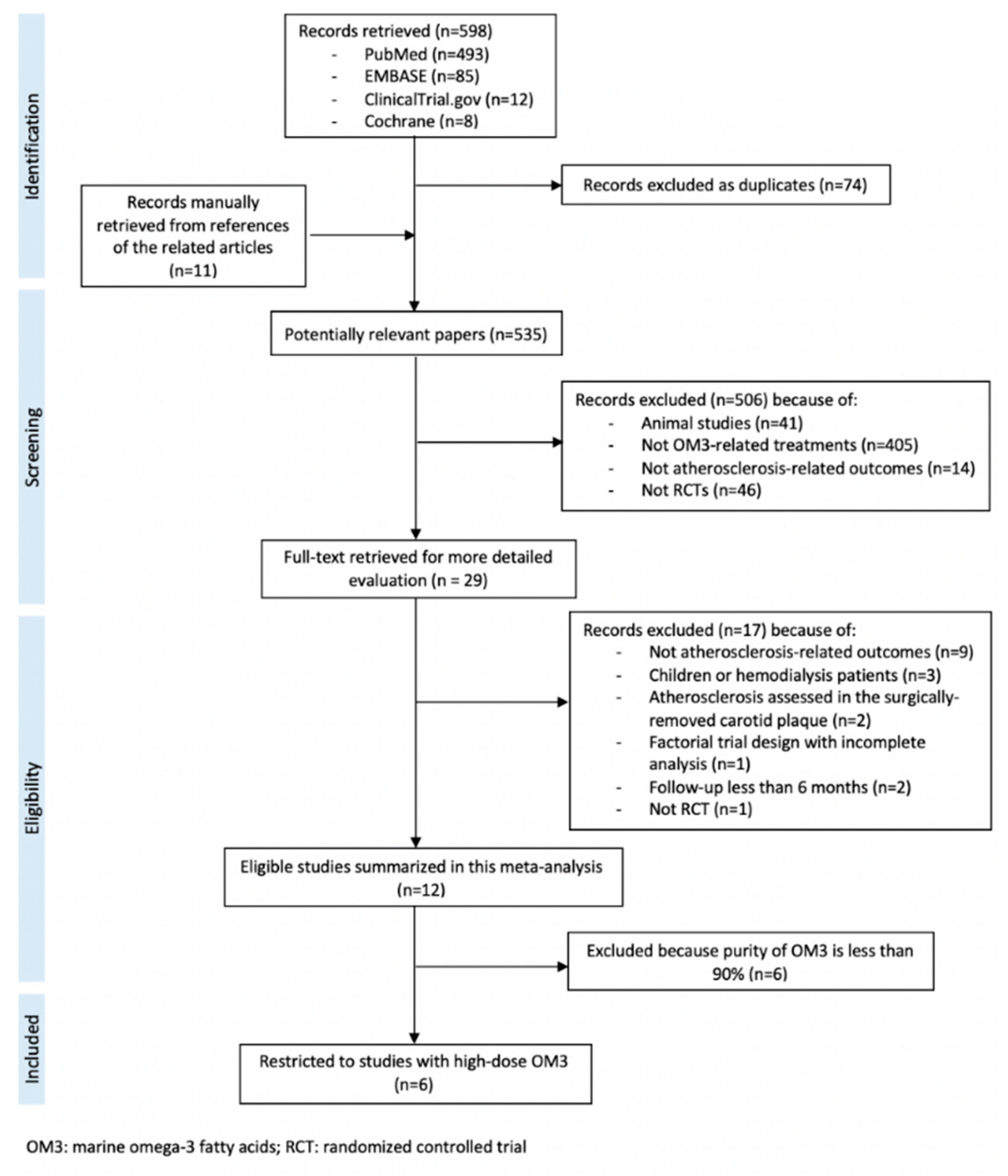 Table 3. Risk of bias for each trial.
Table 3. Risk of bias for each trial.
© 2019 by the authors. Licensee MDPI, Basel, Switzerland. This article is an open access article distributed under the terms and conditions of the Creative Commons Attribution (CC BY) license (http://creativecommons.org/licenses/by/4.0/).
We use cookies on our website to ensure you get the best experience. Read more about our cookies here.
Accept
We have just recently launched a new version of our website. Help us to further improve by taking part in this short 5 minute survey here. here.
Never show this again