This investigation is a cross-sectional study that is a part of the CRO-PALS study (Croatian physical activity in adolescence longitudinal study), a longitudinal observational study on a randomly selected sample of adolescents set in the city of Zagreb (Croatia). Specifically, stratified two-stage random cluster sampling was used to select the participants for this study using sets of random numbers generated in Excel. First, all 86 secondary schools in Zagreb area were stratified by type: grammar schools/vocational schools/private schools. Next, at the first stage of random selection of clusters, based on the proportion of different types of schools and the average number of students in the first grade per school, 13 public (8 vocational and 5 grammar schools) and 1 private school (grammar school), were selected with total of 2827 students enrolled. During the second stage of randomization, half of the first grade classes in each of the selected schools were randomly selected. Finally, all 1408 students enrolled in the selected classes were approached, regardless of their health condition and 903 agreed to participate (response rate = 64%).
This investigation is based on 802 participants (48% girls and 52% boys) aged between 15.2 and 16.0 years with complete data on nutrition and physical activity. All measurements were performed during spring 2014. Because boys and girls differ markedly both in physically activity level and adiposity, all analyses were stratified by gender.
After being informed about the aim and procedures of the study both the participants and their parents gave their informed written consent. The study was performed according to the Declaration of Helsinki and all the procedures were approved by the Ethics Committee of the Faculty of Kinesiology, University of Zagreb (No. 1009-2014).

Participants were weighed barefoot in their shorts and T-shirts with a pre-calibrated portable digital scale to the nearest 0.1 kg. Body height was taken to the nearest 0.1 cm using an anthropometer. BMI was then calculated as body weight in kilograms divided by body height in meters squared (kg/m2). Extended age- and sex-specific BMI cut-off points proposed by the International Obesity Task Force were used to distinguish between normal-weight and overweight or obese children [7].
Skinfold thickness were taken to the nearest 0.1 mm using a Harpenden skinfold calliper (British Indicators, West Sussex, UK) on the right side of the body [8]. Skinfolds were measured at four sites as follows: (1) triceps—halfway between the acromion process and the olecranon process, (2) subscapular—about 20 mm below the tip of the scapula at an angle of 45° to the lateral side of the body, (3) suprailiac—above the iliac crest at the level of the anterior axillary line, and (4) calf—at the level of maximum calf circumference, on the medial aspect of the calf. All skinfold measures were taken in triplicate and median values were retained for analysis. The sum of 4 skinfolds (S4SF) was chosen as an indicator of adiposity as skinfolds were repeatedly shown to better reflect body fatness compared to BMI [9]. Skinfold measurements on all participants were performed by a single, skilled lab technician.

Physical activity level and sedentary behaviors were assessed using the School Health Action, Planning and Evaluation System (SHAPES) questionnaire [10]. The physical activity module of the questionnaire includes two items requesting 7-day recall of moderate intensity physical activity (MPA) and vigorous intensity physical activity (VPA). Participants had to indicate the number of hours (0–4 h) and 15-min increments (0–45 min) that MPA and VPA were performed for each day of the previous week. Average daily physical activity energy expenditure (PAEE) over the investigated 7-day period was calculated as proposed by Wong et al. [10], assuming an average intensity of 4 metabolic equivalent of task (MET) for MPA and 7 METs for VPA. Sedentary behaviors are assessed through 7 items examining the average time spent: (1) playing computer/video games, (2) television viewing, (3) browsing the Internet, (4) homework and studying, (5) listening to music, (6) reading and (7) playing instruments. As for physical activity, responses are provided by indicating the number of hours and minutes in 15-min increments [10].
The SHAPES questionnaire has been previously shown to be a valid and reliable instrument for assessing PA and sedentary behavior (SB) in primary and secondary school children [10].

Multi-pass 24-h recall (5 steps) was the dietary assessment method performed by trained interviewers, and the referent day was a typical workday. The interviews were not performed on Mondays, and the reference to Friday was avoided as the day that resembles weekend dietary habits. Portion size was estimated using national food portion booklet providing three (small, medium and large) photos for each item [11]. Subjects were contacted afterwards if clarification or more details were necessary. Participants who had significantly reduced their food intake on the day prior to the dietary assessment due to health-related or any other reasons were excluded from the analysis. Conversion of collected data to energy and nutrient intakes was performed using national food composition tables, complemented with a Danish database for food not found in the Croatian tables [12,13]. Breakfast was defined as the intake of foods or beverages before 10:00, containing a minimum of 250 kcal. Among several different definitions of breakfast [14], we opted for a definition related to energy intake driven by suggestions for defining eating occasions using minimal energy intake [15]. In Croatian dietary guidelines for children [16], a minimum of 10% of total energy intake is considered a meal instead of a snack. Since average energy requirements in adolescents are estimated at 2500 kcal/day, we set 250 kcal as the minimal energy intake to be taken on a single eating occasion. Participants were defined as breakfast consumer or breakfast non-consumer based on the described criteria.

Data on participants’ descriptive characteristics, breakfast consumption, adiposity and PA level were processed using SPSS software, version 24.0 (IBM, New York, NY, USA), and presented as means ± SD and medians (interquartile range) for normally distributed and not-normally distributed continuous variables, respectively, and as percentages for categorical variables. Initially, differences among girls and boys were assessed using T-test and Median test, with dependence on the variable’s nature. For the following analyses, participants were first stratified by sex and then compared in adiposity measures and daily behavior patterns based on their breakfast consumption habit. First, within an unadjusted model, differences between breakfast consumers and non-consumers were examined via analysis of variance (ANOVA) and Kruskal-Wallis ANOVA, as appropriate. Afterwards, the differences between breakfast consumption groups were tested through analysis of covariance (ANCOVA), and adjusted for age and socio-economic status (SES) as covariates. In addition, T-test and Median test were used to assess possible differences among breakfast consumption groups for age and SES.
To explore the association between breakfast consumption habit and subcutaneous fat, as well as the possible mediation effect of PA, linear regression analysis was applied first in a simple model adjusted for age, SES and sleep time, and subsequently in two models further adjusted for: (1) weekly volume of PA, and (2) weekly volume of PA + sedentary time. For ease of interpretation, unstandardized regression coefficients B (and 95% confidence intervals) are presented. The significance of the mediation effect of PA on the association between breakfast consumption and subcutaneous fat was formally assessed via Sobel test [17]. Finally, in order to investigate the possible moderation effect of PA on the association between breakfast consumption and adiposity, participants were first divided by sex-specific tertiles of moderate-to-vigorous physical activity (MVPA), and then all the linear regression models described previously were repeated in each tertile of PA separately. For all conducted analyses, the level of significance was set at p < 0.05.
The study was performed according to the Declaration of Helsinki and all the procedures were approved by the Ethics Committee of the Faculty of Kinesiology, University of Zagreb (No. 1009-2014).

This investigation is a part of the Croatian Physical Activity in Adolescence Longitudinal Study (CRO-PALS), funded by the Croatian Science Foundation under the number IP-06-2016-9926. 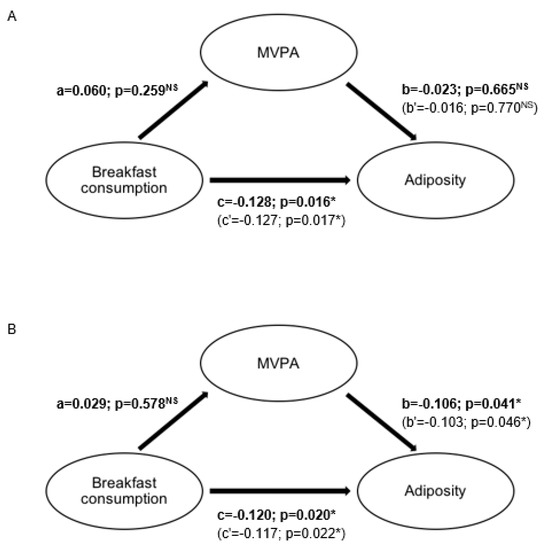 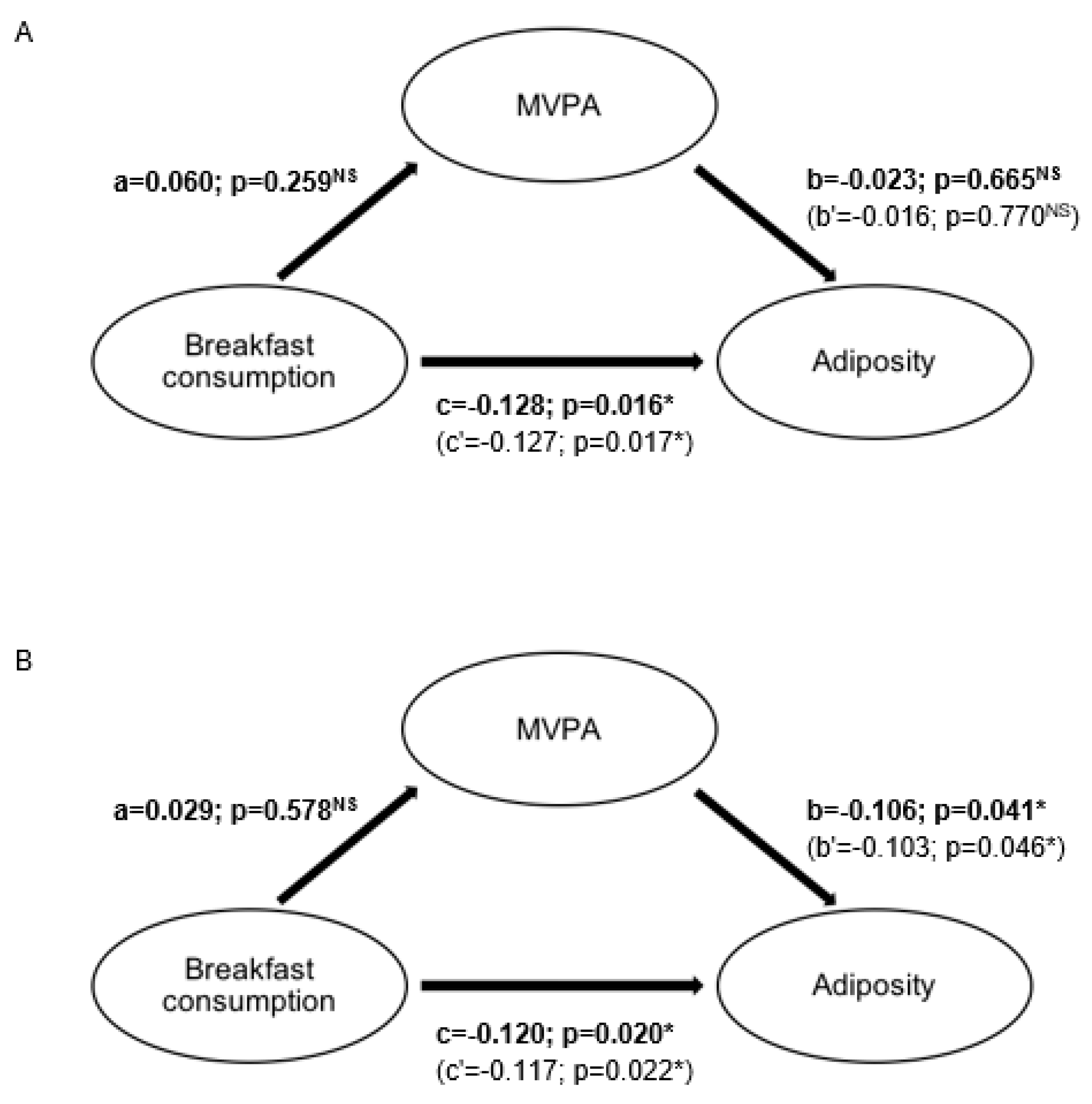