Children’s eating behavior does not necessarily align with dietary recommendations, and there is a need for better understanding the factors underlying their food choices. The aim of this study was to investigate children’s self-reported reasons for accepting and rejecting foods. A questionnaire was developed with reasons based on prior research and in-depth interviews. A set of various food stimuli covering different types was evaluated by 106 girls and 99 boys aged 10–13 years by checking all reasons that apply (CATA) for either accepting or rejecting them. Results showed gender differences among reasons for both food acceptance and rejection, but also in liking and willingness to re-taste the stimuli. The most common reason for food acceptance was good taste in boys and curiosity in girls; for food rejection they were bad taste, bad smell and dislike of appearance in boys and bad taste, bad smell, dislike of appearance and texture in girls. Overall, boys liked the food stimuli more than girls and were more willing to re-taste them. Future research should focus more on the role of sensory properties in both acceptance and rejection, and the potential of children’s curiosity as a driver in tasting foods should be further explored. View Full-Text
Keywords: food choice; acceptance; rejection; children; eating behavior; food; CATA food choice; acceptance; rejection; children; eating behavior; food; CATA
►▼ Show Figures 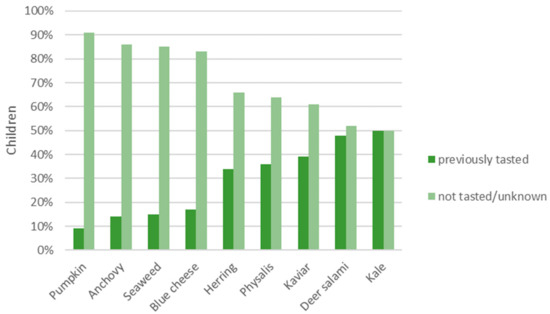