Diet: Cause or Consequence of the Microbial Profile of Cholelithiasis Disease?
Previous Article in Special Issue

Gastric Emptying and Dynamic In Vitro Digestion of Drinkable Yogurts: Effect of Viscosity and Composition

Gastric emptying of food is mainly driven by the caloric concentration, the rheological properties of the chyme, and the physical state (liquid/solid) of food once in the stomach. The present work investigated: (1) The effect of the composition and the viscosity of drinkable yogurts on gastric emptying in pigs, and (2) the behavior of yogurts during dynamic in vitro digestion. Three isocaloric liquid yogurts were manufactured: Two enriched in protein and fiber showing either a low (LV) or high (HV) viscosity, one control enriched in sugar and starch (CT). They were labelled with 99mTc-sulfur colloid and given to pigs (n = 11) to determine gastric emptying pattern by gamma scintigraphy. Then dynamic in vitro digestion of the yogurts was done using the parameters of gastric emptying determined in vivo. Gastric emptying half-times were significantly longer for LV than CT, whereas HV exhibited an intermediate behavior. In vitro gastric digestion showed a quick hydrolysis of caseins, whereas whey proteins were more resistant in the stomach particularly for LV and HV. During the intestinal phase, both whey proteins and caseins were almost fully hydrolyzed. Viscosity was shown to affect the behavior of yogurt in the small intestine. View Full-Text
Keywords: gastric emptying; gamma-scintigraphy; yogurt; in vitro digestion; casein; whey protein; satiety gastric emptying; gamma-scintigraphy; yogurt; in vitro digestion; casein; whey protein; satiety
►▼ Show Figures 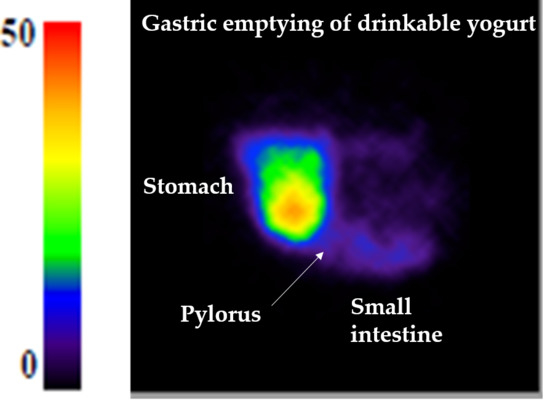