Food Security of Adolescents in Selected Khat- and Coffee-Growing Areas in the Sidama Zone, Southern Ethiopia
Previous Article in Journal

Effects of Genistein on Differentiation and Viability of Human Visceral Adipocytes

This current study aimed to elucidate the effects and possible underlying mechanisms of long-term supplementation with dietary luteolin (LU)-enriched artichoke leaf (AR) in high-fat diet (HFD)-induced obesity and its complications (e.g., dyslipidemia, insulin resistance, and non-alcoholic fatty liver disease) in C57BL/6N mice. The mice were fed a normal diet, an HFD, or an HFD plus AR or LU for 16 weeks. In the HFD-fed mice, AR decreased the adiposity and dyslipidemia by decreasing lipogenesis while increasing fatty acid oxidation, which contributed to better hepatic steatosis. LU also prevented adiposity and hepatic steatosis by suppressing lipogenesis while increasing biliary sterol excretion. Moreover, AR and LU prevented insulin sensitivity by decreasing the level of plasma gastric inhibitory polypeptide and activity of hepatic glucogenic enzymes, which may be linked to the lowering of inflammation as evidenced by the reduced plasma interleukin (IL)-6, IL-1β, and plasminogen activator inhibitor-1 levels. Although the anti-metabolic syndrome effects of AR and LU were similar, the anti-adiposity and anti-dyslipidemic effects of AR were more pronounced. These results in mice with diet-induced obesity suggest that long-term supplementation with AR can prevent adiposity and related metabolic disorders such as dyslipidemia, hepatic steatosis, insulin resistance, and inflammation.
Keywords: artichoke; hepatic steatosis; inflammation; insulin resistance; luteolin; obesity artichoke; hepatic steatosis; inflammation; insulin resistance; luteolin; obesity

Obesity or adiposity, which is rapidly increasing in both industrialized and non-industrialized countries, is a global epidemic that is constantly recognized as a health problem [1]. The World Health Organization estimated that among adults worldwide approximately 13% were obese and 39% were overweight in 2014. Obesity is defined as an imbalance between energy intake and energy expenditure [2]. Adipose tissues play an important role in the improvement of insulin resistance by regulating glucose and lipid metabolism as well as energy balance [3]. They also secrete a number of adipokines (e.g., chemokines, cytokines, and hormones) and produce free fatty acids (FFAs) that affect dyslipidemia [4]. Excessive fat accumulation leads to activation of the immune system and chronic low-grade inflammation. Increased circulating pro-inflammatory cytokines activate the immune system and affect insulin signaling and beta-cell dysfunction, which cause an insulin secretion disorder [5]. Dyslipidemia is characterized by elevated FFA, triglyceride (TG), total cholesterol (TC), and low-density lipoprotein-cholesterol (LDL-C) and decreased high-density lipoprotein-cholesterol (HDL-C) levels in plasma [6]. Obesity causes hypertension, cardiovascular disease, hyperlipidemia, insulin resistance, and type 2 diabetes mellitus [7]. It is also associated with non-alcoholic fatty liver disease (NAFLD). The prevalence and seriousness of this disease increase with the degree of obesity. NAFLD includes a spectrum of liver diseases that range from a fatty liver to steatohepatitis and cirrhosis without alcohol supplementation [8].
The artichoke (Cynara scolymus), which is an herbaceous plant belonging to the Asteraceae family, is usually grown in Mediterranean countries (e.g., Italy, Spain, France, and North Africa) and America. Traditionally, the artichoke has been used as a food and as an important remedy for promoting diuresis and a depurative for the care of rheumatism and gout. It still plays an important part in human nutrition especially in the Mediterranean region. Artichoke flower heads, which are commonly referred to as capitula, are immature composite inflorescences that are the edible part of the plant. Leaf extracts of the artichoke plant are used in herbal medicines as a hepato-protectant and choleretic and reportedly also have anti-carcinogenic, anti-oxidative, anti-human immunodeficiency virus, and antibacterial effects [9]. Artichoke leaves contain various phenolic compounds (about 7.13%) including chlorogenic acid (about 4.71%), cynarin (about 1.62%), luteolin (about 0.42%), cymaroside (about 0.25%), and 1-caffeoylquinic acid (about 0.13%) [10,11]. Among them, luteolin (LU), which is a member of the flavonoids (a subclass of flavones), exists in vegetables and fruits such as celery, parsley, and peppermint. It reportedly has antitumor, anti-inflammatory, and anti-obesity effects [12,13]. Liu J and colleagues [14,15] reported that luteolin ameliorates diet-induced obesity and insulin resistance in mice by activating AMPKα1 signaling in adipose tissue macrophages. However, there are few reports on the effects of the artichoke on obesity and related metabolic disorders. No studies on the effects of long-term supplementation with LU-enriched artichoke leaf (AR) are available.
Accordingly, the aims of the current study were to investigate the effects and possible underlying mechanisms of long-term supplementation with AR on diet-induced obesity (DIO) and related metabolic abnormalities (e.g., dyslipidemia, insulin resistance, and NAFLD) in C57BL/6N mice.

Male C57BL/6N mice (four weeks old) were obtained from Orient Bio (Gyeonggi-do, Korea). All mice were individually housed under a constant temperature (24 °C) with a 12 h light/12 h dark cycle and fed a normal chow diet for 1 week after arrival. The mice were then randomly divided into four groups according to the following diets: normal diet (ND group, AIN-76 purified diet, n = 10), high-fat diet (HFD group, 20% fat, 1% cholesterol, n = 10), HFD with 0.005% (w/w) of LU (LU group, n = 8), and HFD with 0.005% (w/w) of AR (AR group, n = 10), fed for 16 weeks, respectively. The dried artichoke powder was incorporated directly into the HFD and the content of LU in the AR extract was 80% (w/w) (Shaanxi Jiahe Phytochem Co., Ltd., Xi’an, China). All experimental diets were prepared every week and stored in a dark room at −4 °C. At the end of the experimental period, all mice were anesthetized with ether after 12 h of fasting. Blood was taken from the inferior vena cava to determine the plasma lipid, adipokine, and hormone concentrations. The liver and adipose tissues were removed, rinsed with physiological saline, weighed, immediately frozen in liquid nitrogen, and stored at −70 °C until analysis. The animal study protocols were approved by the Ethics Committee at the Kyungpook National University (Approval No. KNU 2016-0040).

2.2. Morphology of the Liver and Fat Tissues

The liver and epididymal white adipose tissue (WAT) were removed from the mice, fixed in a buffer solution of 10% formalin, and embedded in paraffin for staining with hematoxylin and eosin. The stained areas were viewed under an optical microscope (Nikon, Tokyo, Japan) at a magnifying power of 200×.

After fasting the mice for 12 h, the blood glucose level was measured from the tail veins with a glucose analyzer, One Touch Ultra (Lifescan Inc., Wayne, PA, USA). The intraperitoneal glucose tolerance test (IPGTT) was conducted at week 15. In brief, after fasting the mice for 12 h, they were intraperitoneally injected with glucose (0.5 g/kg body weight). The blood glucose level was then measured from the tail vein at 0 min, 30 min, 60 min, and 120 min after the injection. The homeostasis model assessment (HOMA) was used to calculate the homeostatic index of insulin resistance (HOMA-IR) as follows: HOMA-IR = [fasting glucose (mmol/L) × fasting insulin (μIU/mL)]/22.5.

Hepatic and fecal lipids were extracted and dried [16]. Then the dried lipid residues were dissolved in 1 mL of ethanol for TG, cholesterol, and fatty acid (FA) assays. Triton X-100 and a sodium cholate solution in distilled water were added to 200 μL of the dissolved lipid solution to emulsify the molecules. The TG, cholesterol, and FA concentrations were measured using the same enzymatic kits used for the plasma analyses.

The liver and adipose tissues were homogenized in TRIzol reagent (Invitrogen, Grand Island, NY, USA) and the total RNA was reverse-transcribed into cDNA using the QuantiTect Reverse Transcription Kit (Qiagen GmbH, Hilden, Germany). The mRNA expression was quantified by real-time PCR (qPCR) using the SYBR Green PCR Kit (Qiagen) and SDS7000 sequence detection system (Applied Biosystems, Foster City, CA, USA). Gene specific mouse primers were used as suggested in Table 1. The amplification was performed as follows: 10 min at 90 °C, 15 s at 95 °C, and 60 s at 60 °C for a total of 35 cycles. The cycle threshold (Ct) was defined as the cycle at which a statistically significant increase in the SYBR Green emission intensity occurred. The Ct data were normalized using GAPDH and the relative gene expression level was calculated with the 2∆∆Ct method.

The data are presented as the mean ± standard error of the mean. All statistical analyses were performed using SPSS (SPSS Inc., Chicago, IL, USA). Significant differences between the ND and HFD groups were determined using Student’s t-test and significant differences among the groups based on the HFD were determined by one-way analysis of variance (ANOVA). The results were considered statistically significant at p < 0.05.

3.2. Supplementation with AR and LU Improved the Plasma Lipid Levels in Mice with DIO

3.4. Supplementation with AR and LU Lowered Insulin Resistance and Glucose Tolerance by Modulating Hepatic Glucose-Regulating Enzymes in Mice with DIO

This research was supported by a National Research Foundation (NRF) of Korea grant funded by the Korea government (MSIP) (2015R1C1A2A01051533).

The authors have declared no conflicts of interest. 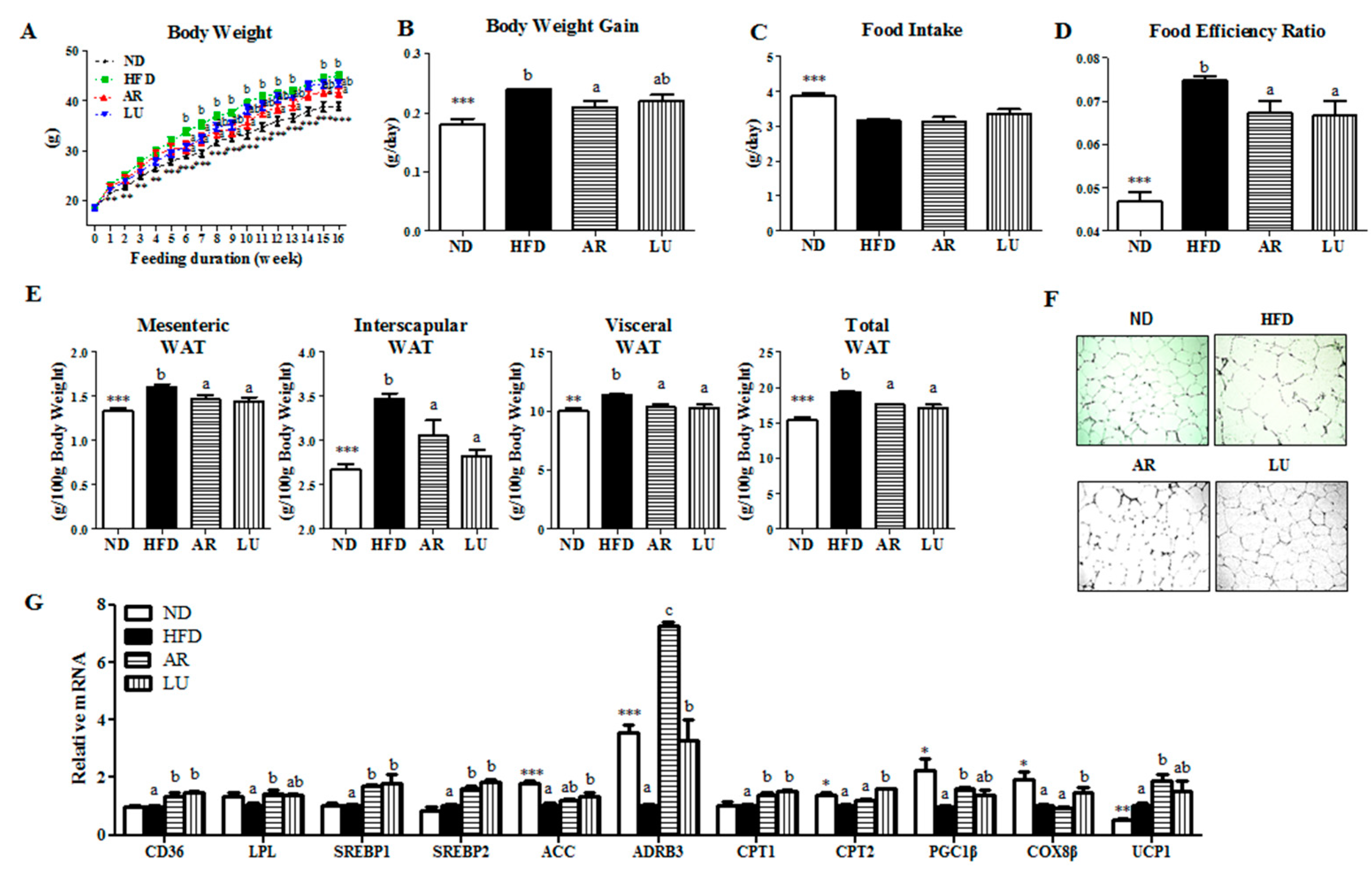 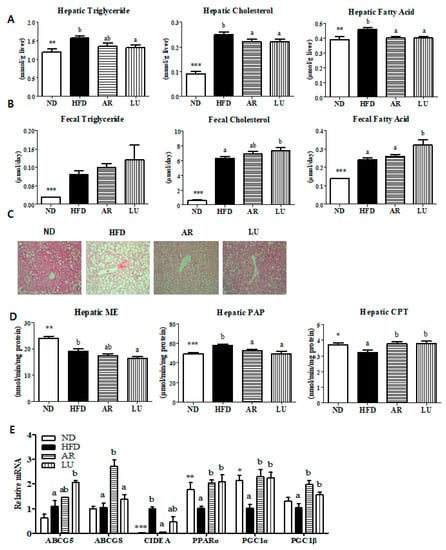 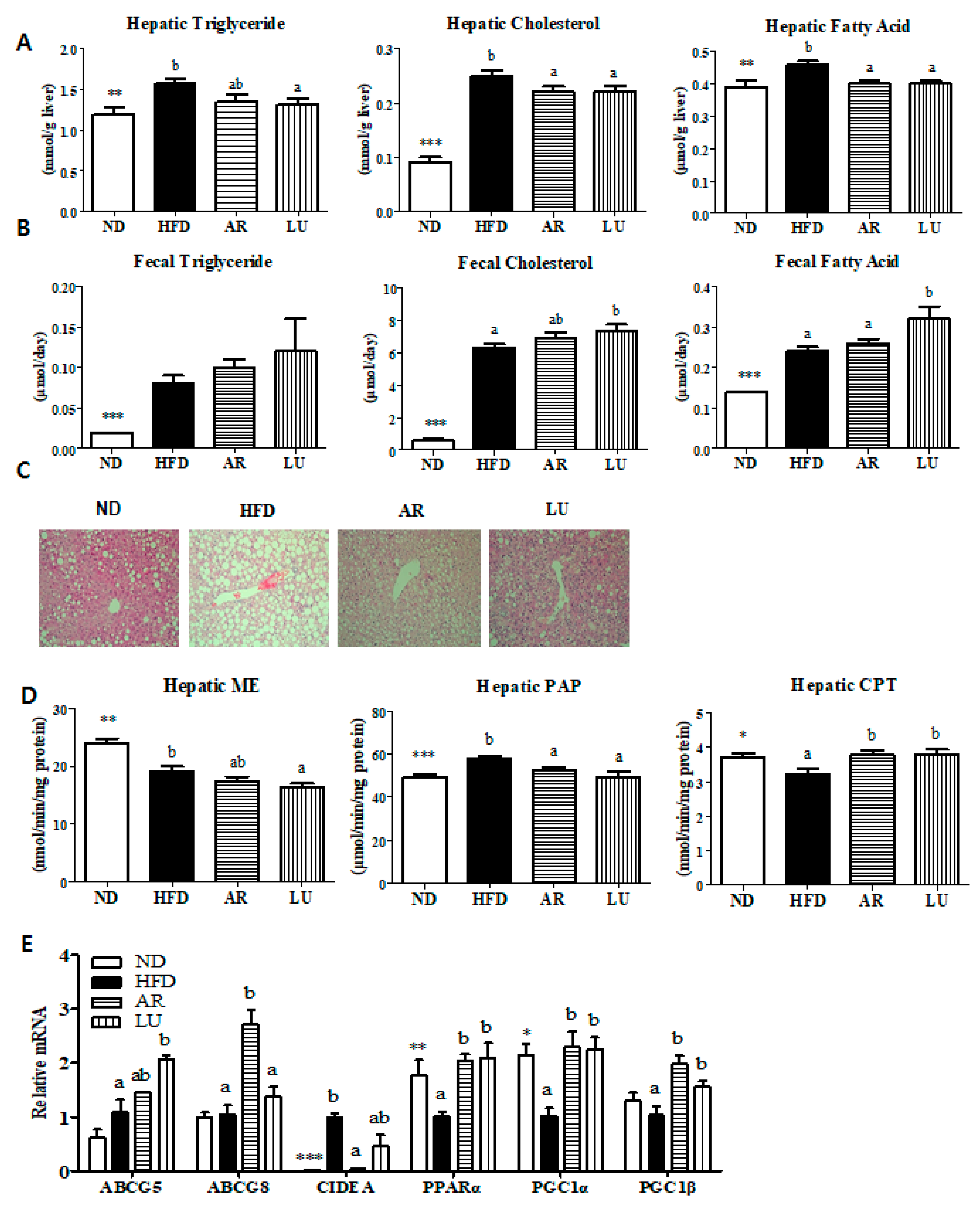 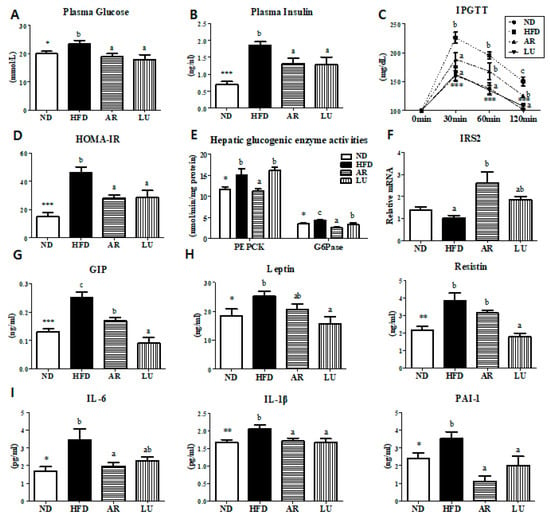 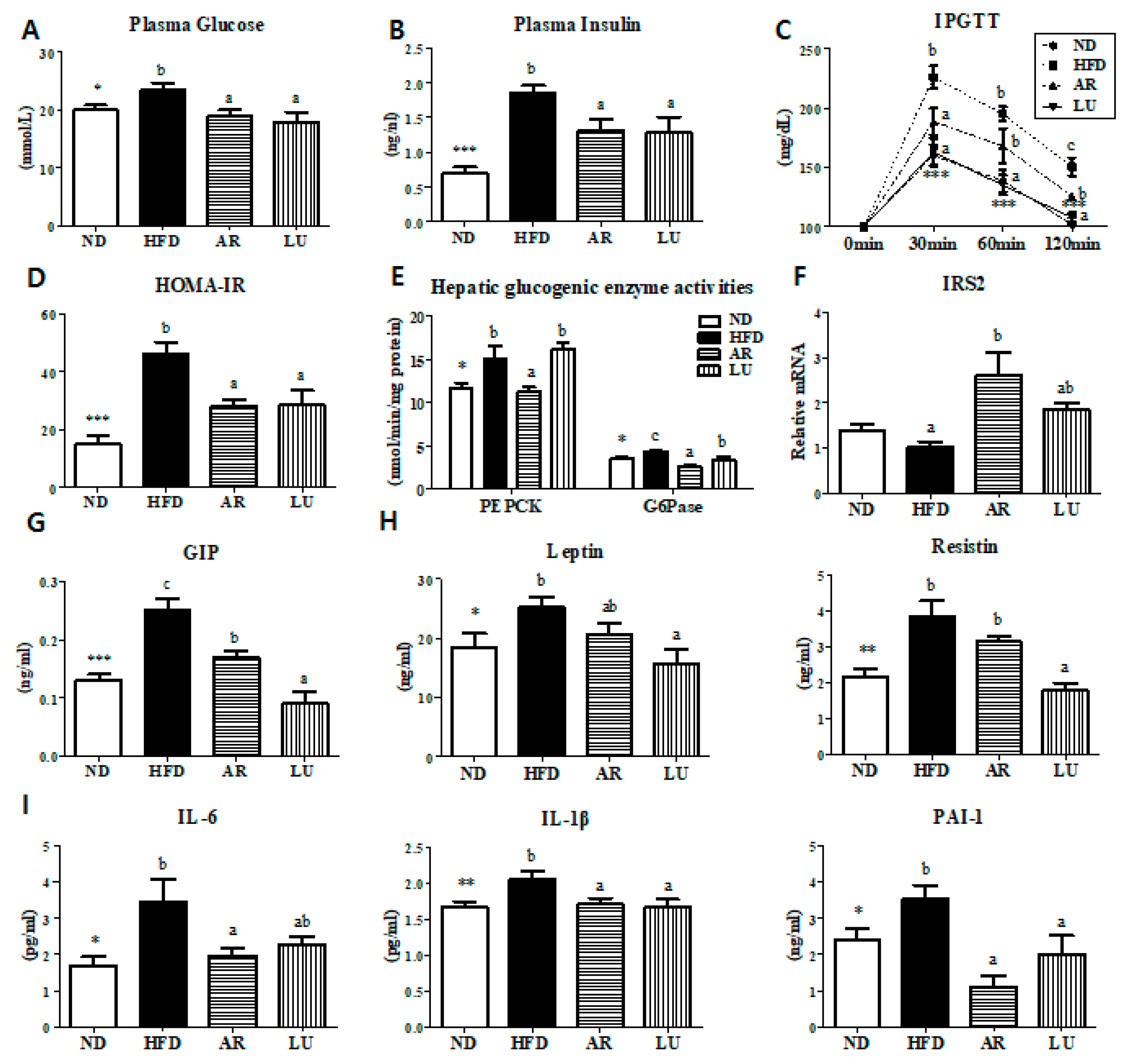 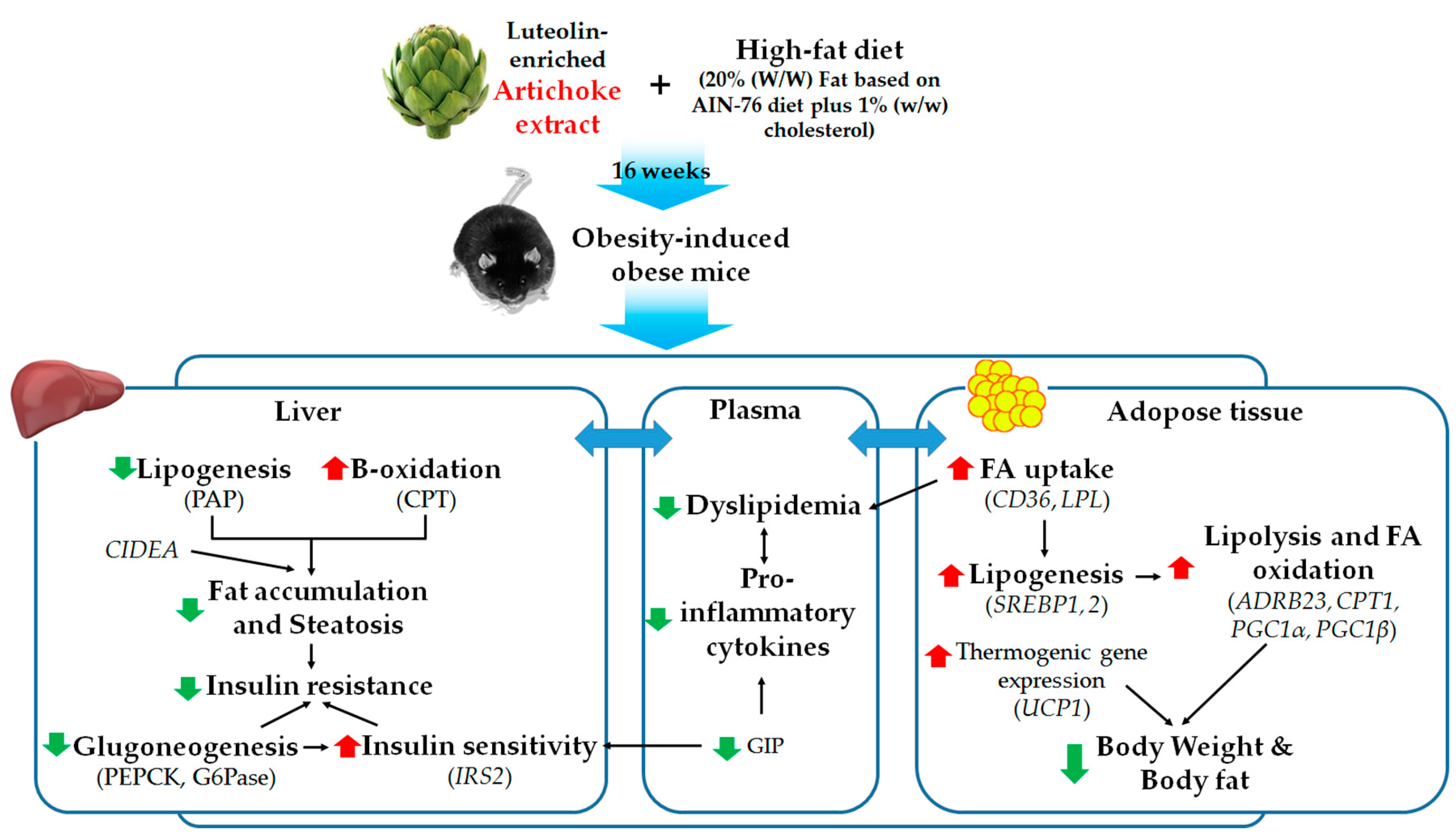