Breakfast in Denmark. Prevalence of Consumption, Intake of Foods, Nutrients and Dietary Quality. A Study from the International Breakfast Research Initiative

Obesity is a serious public health problem that threatens human health worldwide. It results from abnormalities in energy metabolism in adipose tissue, which leads to increased fat mass in tissues, such as adipose tissue and liver tissue, and elevated lipids levels in the blood [1,2]. Obesity is associated with the development of metabolic disorders, such as type 2 diabetes, hyperlipidemia, fatty liver, hypertension, and cardiovascular disease [3,4]. Hyperuricemia is characterized by elevated blood uric acid levels, the final product of purine metabolism. Uric acid plays an important role in the development of metabolic disorders, since uric acid regulates the oxidative stress, inflammation, and proteins involved in glucose and lipid metabolism, and hyperuricemia is positively associated with increased visceral fat mass and various metabolic disorders, such as dyslipidemia, type 2 diabetes, and atherosclerosis [4,5]. Especially, uric acid production in adipose tissue is accompanied by increased xanthine oxidoreductase (XOR) activity, which degrades hypoxanthine and xanthine to uric acid. XOR expression and activity is associated with increased obesity and regulation of adipogenesis in adipose tissue [6,7]. It is considered one of the metabolic diseases linked to both obesity and various metabolic disorders, and growing attention is being paid to the relationship between obesity and uric acid metabolism [5,8].
Although pharmacological therapies are used in clinical practices to treat obesity and hyperuricemia, their use is limited by undesirable side effects [9,10]. Thus, new research on food and drugs that can overcome these limitations is needed. Therefore, increasing attention has been paid to natural products, including traditional medicines, as an alternative strategy [11].
Tetragonia tetragonoides (Pall.) Kuntze, called New Zealand spinach (NZS), is a perennial plant belonging to the Aizoaceae family. It is an edible plant used in salads in Western countries. In Korean medicine, T. tetragonoides has been used as a herbal medicine to treat gastrointestinal diseases, such as gastric hypersecretion, dyspepsia, gastric ulcer, and gastritis [12]. Recently, T. tetragonoides has been reported to improve women’s health, regulate glucose metabolism, and exert anti-inflammatory effects [13,14]. To date, there are no reports available on the effects of T. tetragonoides on obesity, lipid accumulation, or uric acid metabolism. In the present study, we examined the anti-obesity and anti-hyperuricemic effects of NZS and their underlying mechanisms in high-fat diet (HFD)-induced obese mice.

T. tetragonoides (Pall.) Kuntze (NZS) leaves were collected from the ocean sand dunes of Shinan-gun, Jeonnam Province, Korea. The plants were identified by Professor Geung-Joo Lee (Department of Horticulture, Chungnam National University, Daejeon, Korea). An extract from NZS leaves (dry weight, 1 kg) was prepared with 70% ethanol under reflux in a condensation system at 85 °C for 3 h. The extract was concentrated under reduced pressure using a rotary evaporator and then lyophilized. The yield of the dried extract from the starting crude material was 11.2%.

Four-week-old male C57BL/6J mice were purchased from Daehan Biolink Co. (Eumsung, Korea). The mice were maintained under controlled temperature (23 ± 3 °C) and humidity (50%) conditions with a 12-h light/dark cycle. After 1 week of acclimatization, the mice were divided into one of the following six groups based on body weight: group 1 (normal-fat diet (NFD), n = 5) was fed a standard chow diet (14% fat, 21% protein, and 65% carbohydrate; Orient Bio Inc., Seongnam, Korea); group 2 (high-fat diet (HFD), n = 5) was fed a high-fat diet (60% fat, 20% protein, and 20% carbohydrate; rodent diet D12492, Research Diets, New Brunswick, NJ, USA); groups 3, 4, and 5 (HFD + NZS 75, 150, and 300, n = 5, respectively) were fed an HFD and given NZS at doses of 75, 150, and 300 mg/kg, respectively; and group 6 (HFD + Garcinia cambogia (GC), n = 5) was fed an HFD and given Garcinia cambogia (GC) extract at a dose of 245 mg/kg as a positive control. NZS and GC were dissolved in a vehicle (0.5% carboxylmethylcellulose) and orally administered once daily for 8 weeks. Mice in the NFD and HFD groups were administered the vehicle alone. The mice were allowed free access to water and food, and the body weights and food intake were measured every week. Food efficiency rate was calculated as (total weight gain/total food intake) × 100. The experimental design was approved by the Institutional Animal Care and Use Committee of Daejeon University, and all experiments were performed in accordance with committee guidelines.

Liver and white adipose tissue (WAT; epididymal, perirenal, mesenteric, and subcutaneous WAT) were dissected immediately, rinsed, weighed, frozen in liquid nitrogen, and stored at −80 °C until analysis. For histological examination, the liver and WAT were fixed in a 10% formalin solution and embedded in paraffin. Sections were stained with hematoxylin and eosin (H&E). Adipocyte size was determined by measuring the area taken up by 20 adipocytes in a stained section and adipocyte cell number was measured by Image J1.49 software (http://rsb.info.nih.gov/ij/download.html). To determine liver lipid accumulation, liver sections were stained with Oil-red O and hematoxylin.

3.2. Effects of NZS on WAT Weight and Adipocyte Size

3.3. Effects of NZS on Adipogenesis-Related Gene Expression in WAT

3.7. Effects of NZS on Liver and Kidney Weight and Hepatic Lipid Accumulation

3.8. Effects of NZS on Lipid-Metabolism-Related Genes and Protein Expression in the Liver

3.9. Identification of Major Compounds in NZS by UPLC-QT of MS

We found that NZS reduced body weight gain, WAT and adipocyte size, liver weight, hepatic TG accumulation, and plasma uric acid levels and changed plasma lipid profiles, suggesting that NZS has anti-obesity, anti-hyperlipidemic, and anti-hyperuricemic effects. These effects of NZS were associated with a reduced expression of XOR and adipogenesis-related genes and increased the number of proteins involved in fatty acid oxidation. To our knowledge, this is the first report on the anti-obesity and anti-hyperuricemia activities and mechanisms of NZS. Our results suggest that NZS could be used for the prevention and treatment of obesity, hyperlipidemia, and hyperuricemia.

This research was supported by a grant from the Korea Institute of Oriental Medicine (K18030) funded by the Korean government (Ministry of Science and ICT), and “Center for Vegetable Seed Development (No.213003-05-1-SBW30)”, IPET, Ministry of Agriculture, Food and Rural Affairs (MAFRA) of Korea.

The authors have no competing interests to declare in regard to this manuscript. 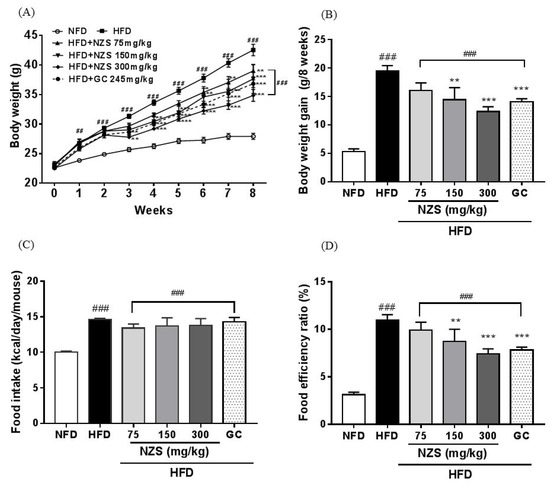 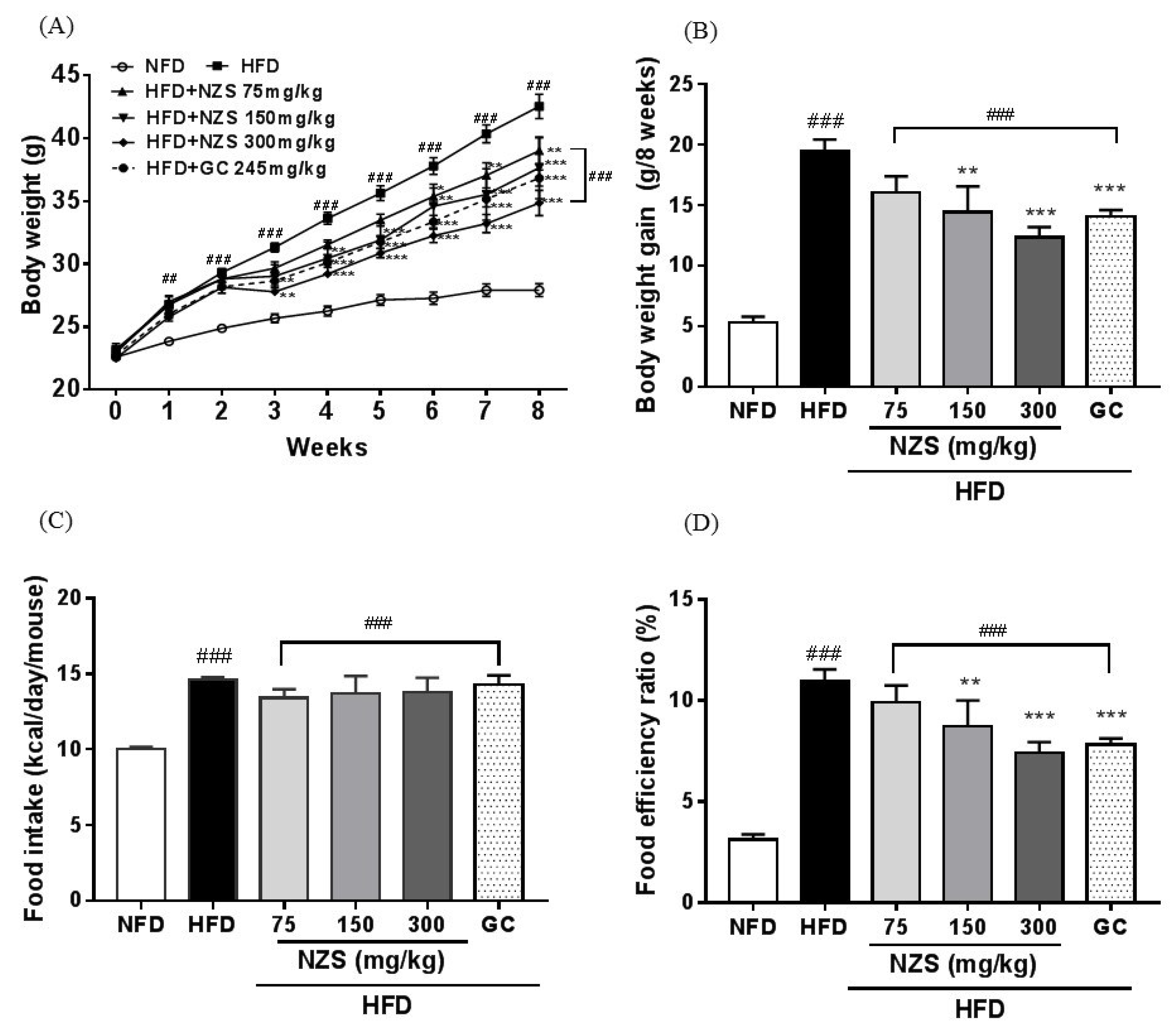 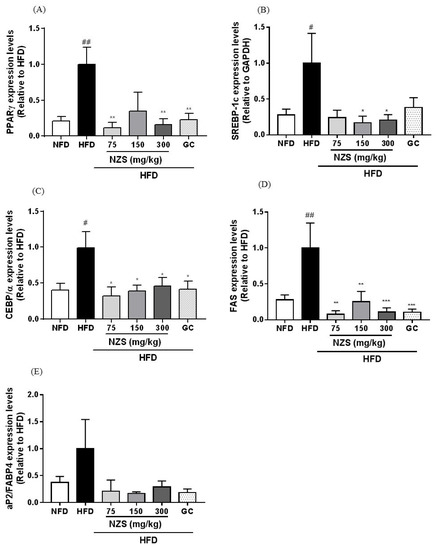 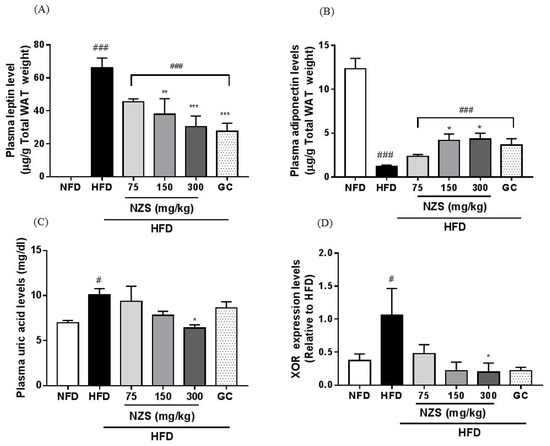 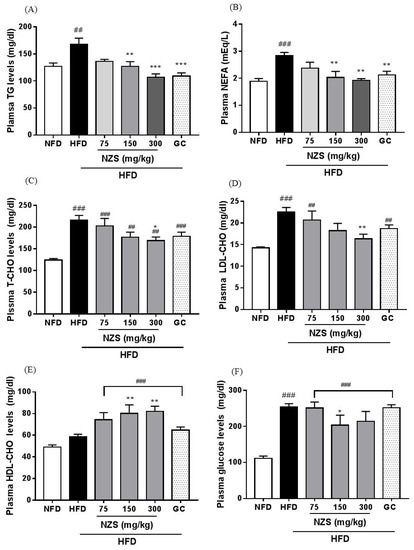 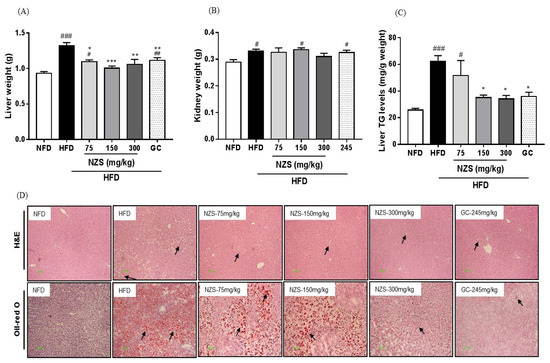 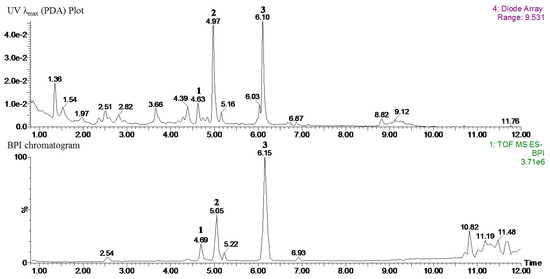 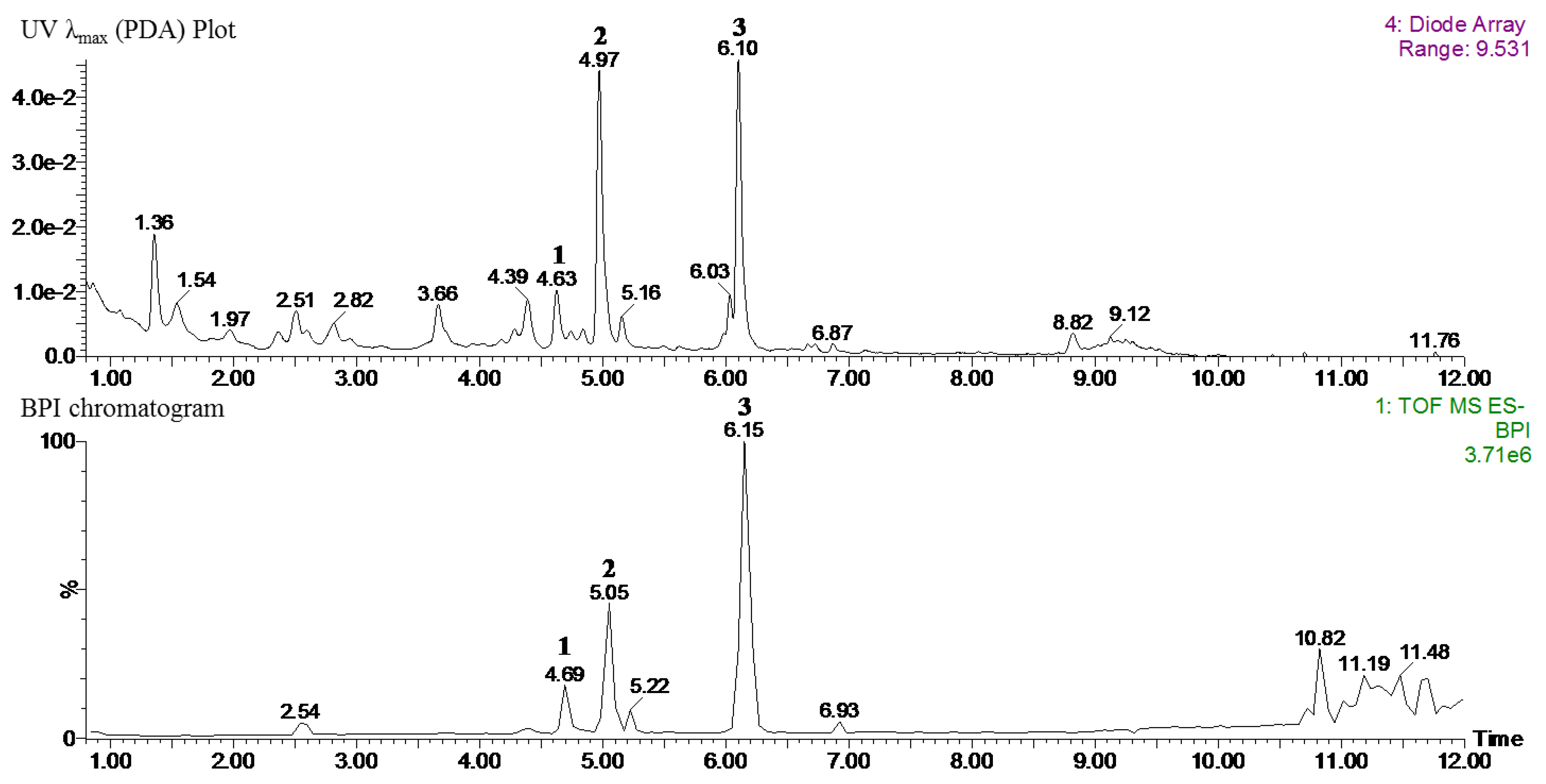