Osteoarthritis and the Mediterranean Diet: A Systematic Review

Dietary Carotenoids Intake and the Risk of Gastric Cancer: A Case—Control Study in Korea

Although the incidence of gastric cancer (GC) has declined, it remains the second most common cancer in Korea. As a class of phytochemicals, carotenoids are fat-soluble pigments that are abundant in fruits and vegetables and have health-promoting properties, including cancer prevention effects. This case-control study investigated the effects of total dietary carotenoids, dietary carotenoid subclasses (α-carotene, β-carotene, β-cryptoxanthin, lutein/zeaxanthin, and lycopene), and foods contributing to the dietary intake of each carotenoid on the risk of GC. Four hundred and fifteen cases and 830 controls were recruited from the National Cancer Center Hospital in Korea between March 2011 and December 2014. A significant inverse association between total dietary carotenoids and GC risk was observed among women (odds ratio (OR) 0.56, 95% confidence interval (CI) 0.32–0.99). A higher intake of dietary lycopene was inversely associated with GC risk overall in the subjects (OR 0.60, 95% CI 0.42–0.85, p for trend = 0.012), men (OR 0.60, 95% CI 0.39–0.93), and women (OR 0.54, 95% CI 0.30–0.96, p for trend = 0.039). This significant association between dietary lycopene intake and GC risk was also observed in the subgroups of Helicobacter pylori (H. pylori)-positive subjects and those who had ever smoked. Among the major contributing foods of dietary lycopene, consumption of tomatoes and tomato ketchup was inversely associated with GC risk in the overall subjects, men, and women. Based on our findings, a higher intake of dietary lycopene and contributing foods of lycopene (tomatoes and tomato ketchup) may be inversely associated with the risk of GC. View Full-Text
Keywords: carotenoids; lycopene; gastric cancer; H. pylori; smoking; case-control study; Korea carotenoids; lycopene; gastric cancer; H. pylori; smoking; case-control study; Korea
►▼ Show Figures 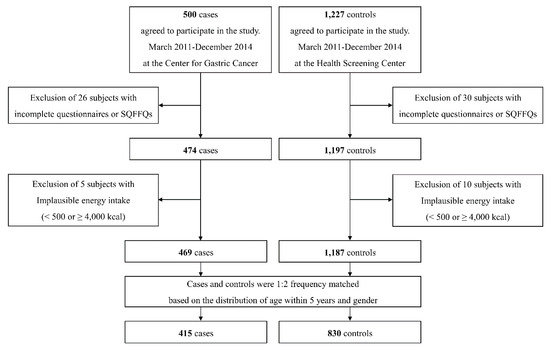