Male osteoporosis is associated with higher rates of disability and mortality. Hence the search for suitable intervention and treatment to prevent the degeneration of skeletal health in men is necessary. Eurycoma longifolia (EL), a traditional plant with aphrodisiac potential may be used to treat and prevent male osteoporosis. The skeletal protective effect of quassinoid-rich EL extract, which has a high content of eurycomanone, has not been studied. This study aimed to determine whether EL could prevent skeletal deteriorations in gonadal hormone-deficient male rats. Ninety-six male Sprague–Dawley rats were randomly assigned to baseline, sham-operated (Sham), orchidectomised or chemically castrated groups. Chemical castration was achieved via subcutaneous injection of degarelix at 2 mg/kg. The orchidectomised and degarelix-castrated rats were then divided into negative control groups (ORX, DGX), testosterone-treated groups (intramuscular injection at 7 mg/kg weekly) (ORX + TES, DGX + TES), and EL-supplemented groups receiving daily oral gavages at doses of 25 mg/kg (ORX + EL25, DGX + EL25), 50 mg/kg (ORX + EL50, DGX + EL50), and 100 mg/kg (ORX + EL100, DGX + EL100). Following 10 weeks of treatment, the rats were euthanized and their blood and femora were collected. Bone biochemical markers, serum testosterone, osteoprotegerin (OPG), and receptor activator of nuclear factor kappa β-ligand (RANKL) levels and histomorphometric indices were evaluated. Quassinoid-rich EL supplementation was found to reduce degenerative changes of trabecular structure by improving bone volume, trabecular number, and separation. A reduction in the percentage of osteoclast and increase in percentage of osteoblast on bone surface were also seen with EL supplementation. Dynamic histomorphometric analysis showed that the single-labeled surface was significantly decreased while the double-labeled surface was significantly increased with EL supplementations. There was a marginal but significant increase in serum testosterone levels in the ORX + EL25, DGX + EL50, and DGX + EL100 groups compared to their negative control groups. Quassinoid-rich EL extract was effective in reducing skeletal deteriorations in the androgen-deficient osteoporosis rat model.
Keywords: Eurycoma longifolia; degarelix; testosterone; osteoporosis Eurycoma longifolia; degarelix; testosterone; osteoporosis

The study was conducted in accordance with the recommendations of Universiti Kebangsaan Malaysia (UKM) Animal Ethics Committee (Approval Code: FP/FAR/2015/NAZRUN/25-MAR./665-MAR.-2015-DEC.-2017). Ninety-six intact-male Sprague–Dawley rats (3 months old) were allowed to acclimatize to an environmentally controlled room (12-h light/dark cycle, room temperature) in an animal care facility for one week. The animals were housed in plastic cages and were given access to standard pellet diet and water ad-libitum.
Then, the rats (weighing between 300 g and 350 g) were randomized into four main groups, which were the baseline group (Baseline, n = 8), sham-operated (Sham, n = 8), surgically- and chemically-castrated groups. The baseline rats that did not undergo any surgical treatment or intervention were sacrificed at the beginning of the study. Surgical castration was carried out by orchidectomy, where both testes were permanently removed under anesthesia. Chemical castration was performed via two subcutaneous injections of degarelix at a dose of 2 mg/kg with the testes remaining intact. The first injection was given at the beginning of the study and the second injection 6 weeks later. The surgically castrated rats which consisted of forty rats were further subdivided into five groups of orchidectomised control (ORX), orchidectomised and given testosterone at 7 mg/kg (ORX + TES), orchidectomised and given standardized quassinoid-rich EL extracts at 25 mg/kg (ORX + EL25), 50 mg/kg (ORX + EL50) and 100 mg/kg (ORX + EL100). The chemically castrated groups were subdivided into degarelix-induced control (DGX), degarelix-induced, and given testosterone at 7 mg/kg (DGX + TES), degarelix-induced and given standardized quassinoid-rich EL extracts at 25 mg/kg (DGX + EL25), 50 mg/kg (DGX + EL50), and 100 mg/kg (DGX + EL100) with eight rats in each group. One week of recovery period from castration procedures was given to the rats before starting the treatments. Testosterone enanthate was injected intramuscularly once a week while the standardized quassinoid-rich EL extracts were given daily for 10 weeks via oral gavages.

Rats in the baseline group were killed by ether overdose before the start of the study while the other rats were sacrificed upon completion of their treatments. The rat bones were fluorochrome-labelled by intraperitoneal injection of 20 mg/kg calcein for dynamic histomorphometry measurements at 9 days and 2 days before euthanasia. The rats were fasted overnight before blood collection was performed. Blood was collected from the orbital sinus. After three hours at room temperature, serum was extracted by centrifugation (3000 rpm × 10 min) and stored at −80 °C until biochemical analyses were performed. The left femora were dissected out and prepared for histomorphometric analyses.

The histomorphometric parameters were defined as structural, static, and dynamic indices according to the American Society for Bone and Mineral Research Committee. The distal part of the left femora was sawed into halves and fixed with 10% neutral-buffered formalin. One part of the bone samples was decalcified using ethylenediaminetetra-acetic acid (Sigma-Aldrich, St. Louis, MO, USA) while the other part was processed as undecalcified specimens. Decalcification was carried out for 8 weeks during which time the decalcifying solution was changed weekly. The decalcified bones were dehydrated and processed to form paraffin blocks. Paraffin sections of 5.0 μm thick were stained with hematoxylin and eosin stain (H & E).
The undecalcified specimens were embedded in polymer methyl methacrylate (Osteo-Bed Bone Embedding Kit; Polysciences, Warrington, PA, USA) and sectioned at 9.0 μm thickness using a microtome (Leica RM2155, Wetzlar, Germany). The sections were then stained using Von Kossa’s method for structural histomorphometry. The histological slides were analyzed using Nikon Eclipse 80i microscope (Nikon Instrument Inc., Melville, NY, USA) with an image analyzer software Pro-Plus v. 5.0 (Media Cybernatics, Silver Spring, MD, USA) and a Weibel grid as described previously (Parfitt et al. 1987). The unstained bones were analyzed for dynamic bone parameters using a fluorescence microscope (Nikon Eclipse 80 μ, Nikon, Tokyo, Japan) and an image analyzer Pro-Plus (Media Cybernetics, Silver Spring, MD, USA). The measurements were performed at the metaphyseal region, which is located 1 mm from growth plate, excluding the endocortical region. This is the secondary spongiosa area, which is rich in trabecular bone. Trabecular bone was chosen because its remodeling process is more dynamic than the cortical bone. All the histomorphometric parameters measured were listed in Table 1.

Results were expressed as mean ± standard error of the mean (SEM). All data were analyzed using the Statistical Package for the Social Sciences (SPSS, version 23.0, Chicago, IL, USA). Distribution of the data was assessed using the Shapiro–Wilk test. A parametric one-way analysis of variance (ANOVA) was performed to detect any significant difference among the groups. If the results were significant (p ≤ 0.05), the Multiple Comparisons Post Hoc Tests, either Tukey’s or Dunnett’s T3 were used to determine the specific differences between means: p-value less than 0.05 was considered as statistically significant.

P.A.J. performed the experiment and wrote the manuscript with support from I.N.M., E.A., N.M. and A.N.S. A.N.S. and I.N.M. helped supervised the project. All authors helped shape the research, analysis, and manuscript.

The authors would like to acknowledge the Faculty of Medicine, Department of Pharmacology, Universiti Kebangsaan Malaysia (UKM) for providing resources and technical support throughout the research process. This study was funded by the Ministry of Agriculture for providing New Application for Herbal Research Grant Scheme (NRGS) (NH1014D040). The authors would also like to acknowledge Prof Chan Kit Lam from the Faculty of Pharmacy USM for providing the quassinoid-rich extract (TAF273). 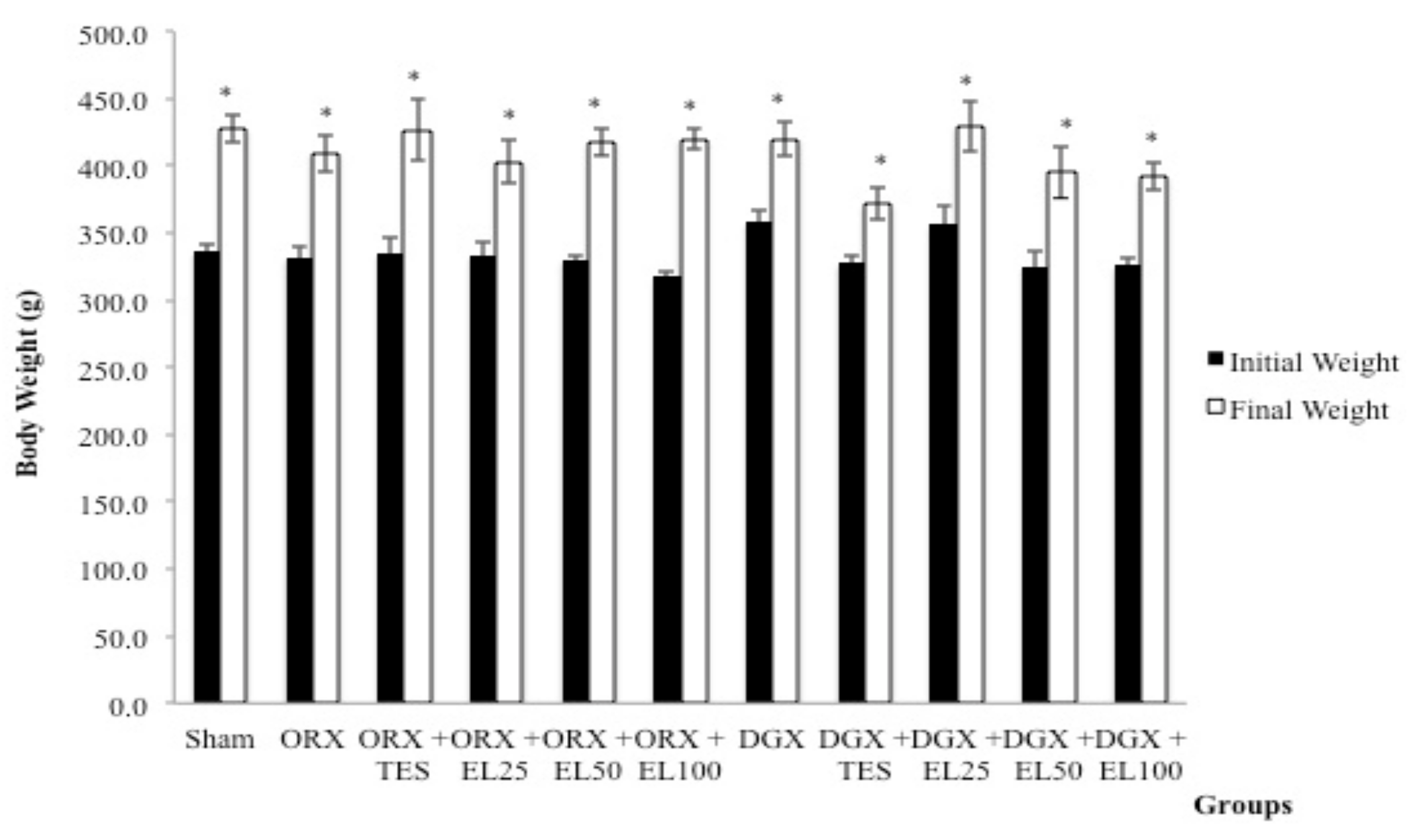 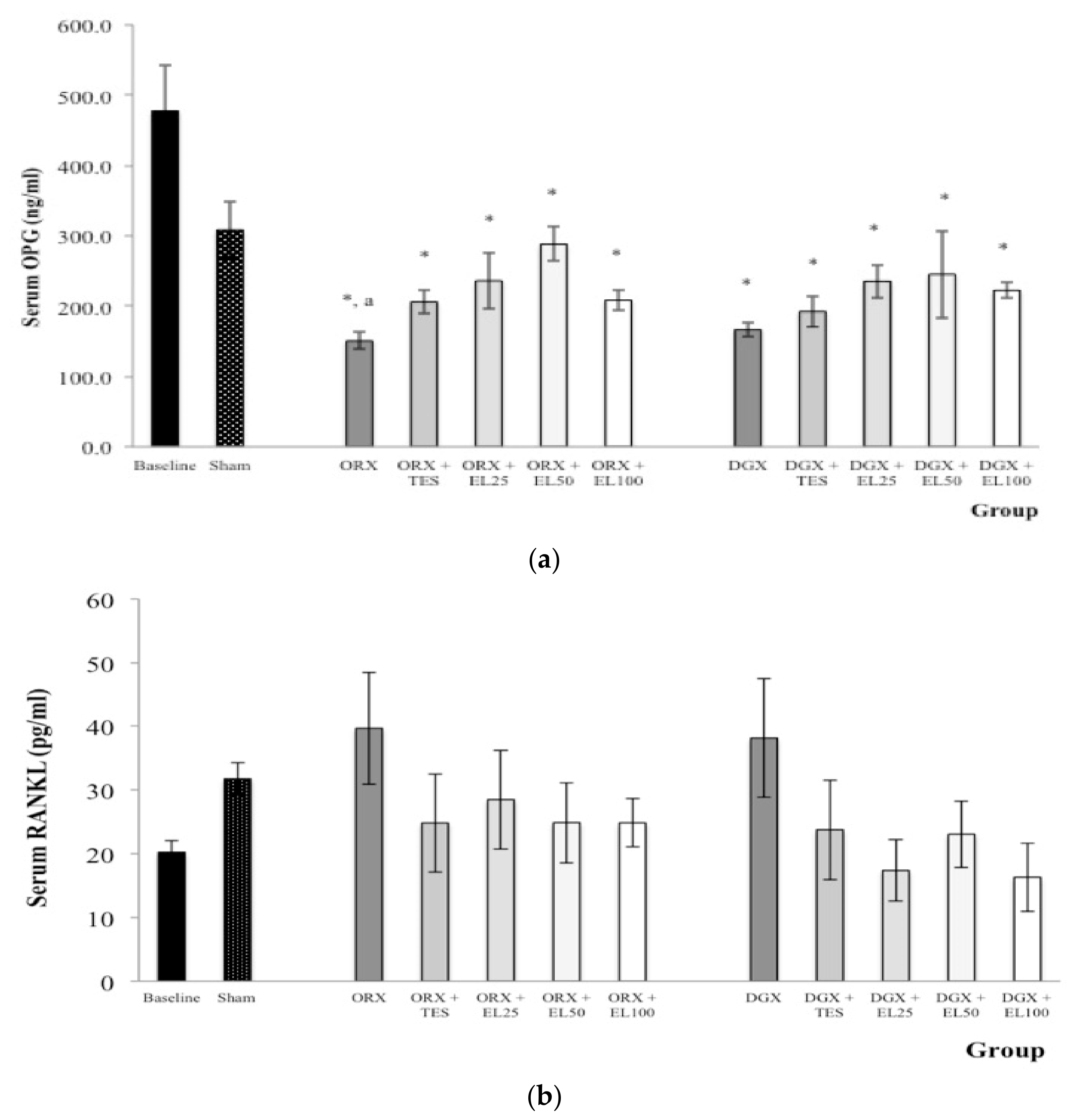