Quality of Life in Patients with Gluten Neuropathy: A Case-Controlled Study
Next Article in Special Issue

Objective: In China, a low-fat diet (LFD) is mainly recommended to help improve blood glucose levels in patients with type 2 diabetes mellitus (T2DM). However, a low-carbohydrate diet (LCD) has been shown to be effective in improving blood glucose levels in America and England. A few studies, primarily randomized controlled trials, have been reported in China as well. Method: Firstly, we designed two ‘six-point formula’ methods, which met the requirements of LCD and LFD, respectively. Fifty-six T2DM patients were recruited and randomly allocated to the LCD group (n = 28) and the LFD group (n = 28). The LCD group received education about LCD’s six-point formula, while the LFD group received education about LFD’s six-point formula. The follow-up time was three months. The indicators for glycemic control and other metabolic parameters were collected and compared between the two groups. Results: Forty-nine patients completed the study. The proportions of calories from three macronutrients the patients consumed met the requirements of LCD and LFD. Compared to the LFD group, there was a greater decrease in HbA1c level in the LCD group (−0.63% vs. −0.31%, p < 0.05). The dosages of insulin and fasting blood glucoses (FBG) in the third month were lower than those at baseline in both groups. Compared with baseline values, body mass index (BMI) and total cholesterol (TC) in the LCD group were significantly reduced in the third month (p < 0.05); however, there were no statistically significant differences in the LFD group. Conclusions: LCD can improve blood glucose more than LFD in Chinese patients with T2DM. It can also regulate blood lipid, reduce BMI, and decrease insulin dose in patients with T2DM. In addition, the six-point formula is feasible, easily operable, and a practical educational diet for Chinese patients with T2DM. View Full-Text
Keywords: diabetes mellitus; diet; carbohydrate; blood glucose; HbA1c; fasting blood glucose; postprandial blood glucose diabetes mellitus; diet; carbohydrate; blood glucose; HbA1c; fasting blood glucose; postprandial blood glucose
►▼ Show Figures 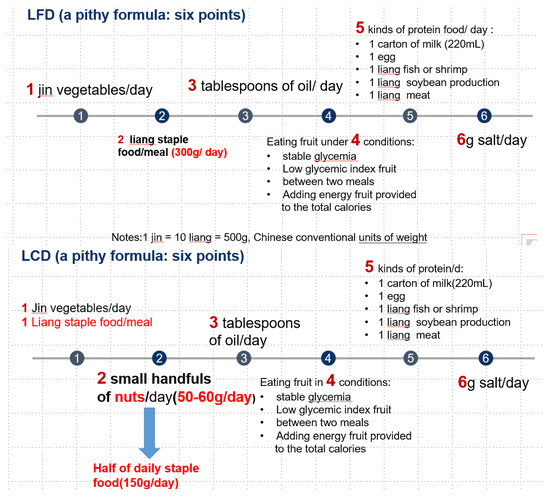