What Is the Evidence for “Food Addiction?” A Systematic Review
Next Article in Special Issue

In this study, we examined early growth characteristics among small-for-gestational-age (SGA) preterm twins compared to their appropriate-for-gestational-age (AGA) counterparts. A retrospective study evaluated all consecutive twins born between 2008 and 2015 at a tertiary referral center whose gestational age ranged from 30.0 to 34.86 weeks. Included were twins in which one twin was AGA and the other SGA at birth. Changes of ≥2, 1–1.99, and 0–0.99 in z-score between births and 36 weeks post menstrual age (PMA) were respectively defined as severe, moderate, and mild postnatal growth failure (PNGF) in weight or head circumference (HC). Early neonatal morbidities were documented. Multiple logistic regression analysis was applied to determine conditions associated with PNGF and its severity. Out of 666 sets of twins, 83 met the inclusion criteria. Weight PNGF was similar and mild among the SGA and the AGA groups (0.9 ± 0.46 vs. 0.96 ± 0.44 z-score, respectively, p = 0.24). At 36 weeks PMA, a significantly larger proportion of SGAs were below −2 z-scores in weight (84.3%) compared to birth (31.3%) or to the AGAs (8.4%). In both groups, weight PNGF correlated with the time needed to regain birth weight. HC PNGF was mild among both groups, yet significantly more prominent among the AGAs (0.39 ± 0.72 z-score) vs. SGAs (0.75 ± 0.65 z-score, p = 0.001). We suggest that among preterm SGA infants, the absolute z-score should be used to assess the severity of weight PNGF. Individual nutritional strategies to decrease time to regain birth weight may mitigate severe malnutrition among SGAs. View Full-Text
Keywords: preterm infant; twin; small for gestational age; growth preterm infant; twin; small for gestational age; growth
►▼ Show Figures 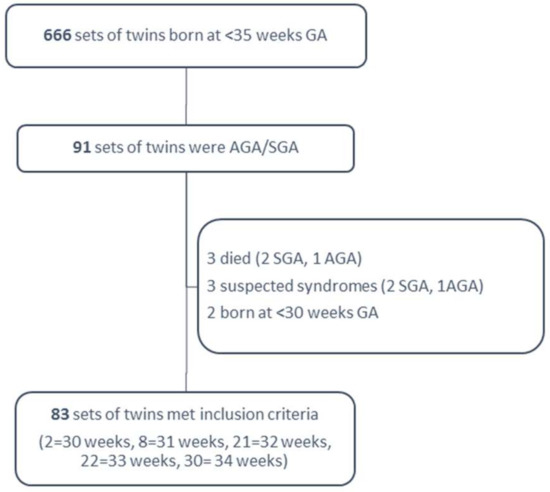