Dietary Cholesterol, Serum Lipids, and Heart Disease: Are Eggs Working for or Against You?
Next Article in Special Issue

Protein Intake and Distribution in Relation to Physical Functioning and Quality of Life in Community-Dwelling Elderly People: Acknowledging the Role of Physical Activity
Previous Article in Journal / Special Issue

The Effects of Isoflavone Supplementation Plus Combined Exercise on Lipid Levels, and Inflammatory and Oxidative Stress Markers in Postmenopausal Women

Gastrointestinal symptoms (GIS) are common in patients with end-stage renal disease (ESRD) and are associated with nutritional risks resulting from low food intake. Little is known about the relationship between GIS and malnutrition in geriatric patients with ESRD. The main objective of this study was to determine the relationship between nutritional status and severity of GIS in geriatric patients on dialysis therapy. Clinically-stable geriatric patients (older than 60 years old) who were dialysis outpatients were included in this cross-sectional study. The severity of GIS was assessed using the Gastrointestinal Symptoms Questionnaire (GSQ, short version), with patients classified into three groups: mild, moderate, and severe. Nutritional status was evaluated with the Malnutrition Inflammation Score (MIS), anthropometric assessment, biochemical parameters, and bioelectrical impedance. Descriptive statistics were used and differences between groups were analyzed with ANOVA and Kruskal Wallis, with a p < 0.05 considered to indicate significance. Fifty patients completed the study; the median age was 67 years old. Twenty-three patients were on hemodialysis (HD) and 27 were on peritoneal dialysis (PD). No significant differences were found according to dialysis modality, presence of diabetes, or gender. Ninety percent of patients had at least one GIS. Poorer nutritional status (evaluated by MIS) was related to a higher severity of GIS. There were no significant differences with other nutritional parameters. Our study showed a high prevalence of GIS in geriatric patients. There were no differences in observed GIS values that were attributed to dialysis modality, gender, or presence of type 2 diabetes mellitus (DM2). Severe GIS values were associated with poorer nutritional status determined by MIS, however, there was no association with anthropometry, biochemical values, or bioimpedance vector analysis. View Full-Text
Keywords: nutritional status; gastrointestinal symptoms; geriatric patients; dialytic therapy. nutritional status; gastrointestinal symptoms; geriatric patients; dialytic therapy.
►▼ Show Figures 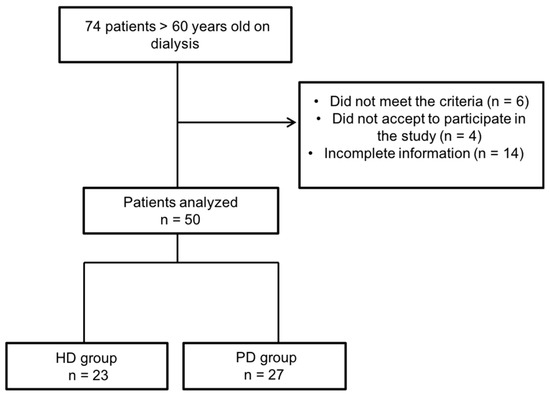